The birds are singing today, must be they don't know about the foot of snow predicted tomorrow. 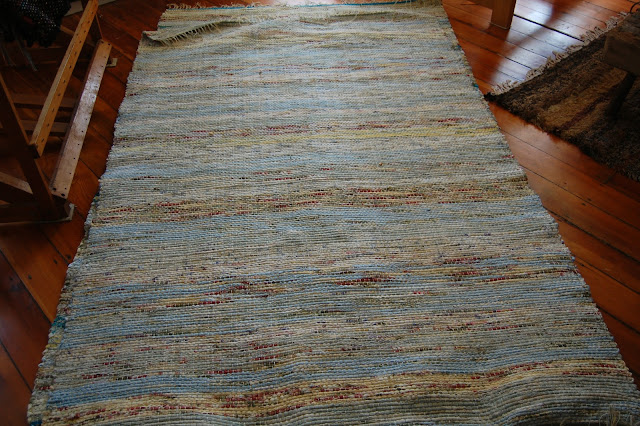 The cat saga continues.  Bubbalee is still very pregnant, showing up to eat, and then keeping a low profile.
Bunnynose, who we recently got neutered, has been reunited with his family, for what they are worth.
They moved to Maine a year ago, and relied on the people who rented their house to feed him.  I guess they didn't do all that well at it, because we fed him all winter.  His original family just moved back, and suddenly Bunnynose, whose real name they say, is Pete, is now getting time in the house.
I am still calling him Bunnynose.  I wouldn't have left him that way.
The gold cat, with the rings around his tail, or Ringo, as was suggested to me, has been fighting with every cat that comes around.  He is also yowling outside all day.  He is very thin, and ate a whole can of cat food in about FIVE bites. 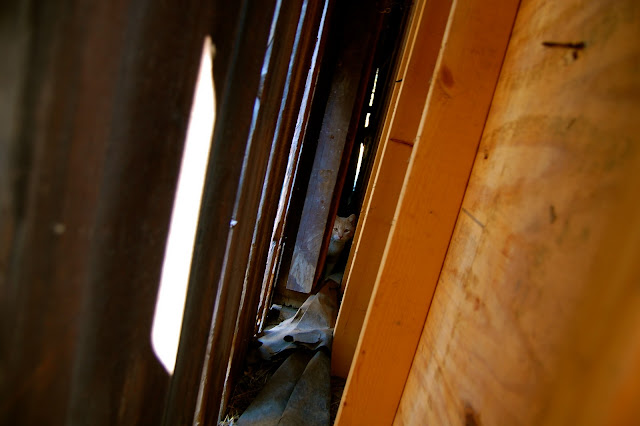 He hides between the outside wall of the barn, and the wall of the looper room.  See him way back there?
Well, tomorrow, he is going for a ride to the vet's.  Maybe if he is neutered, he will stop fighting every cat in the neighborhood.
I thought he was wild, but tonight, my friend Sheila called to him, and he came right over and she petted his head.  He meowed and meowed.
Once again, someone dumped their pet, and left him to wander around, unneutered, unfed.
I wonder how they sleep at night? 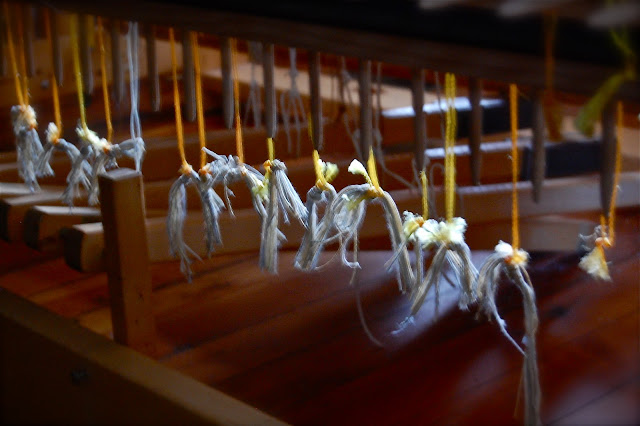 We are busy, busy at the studio.  But busy is good.  It means that someone likes what we are doing.
Today, while on the phone with a customer, looking for a rug for her, I realized that there was a rug on the shelf, that wasn't on the web site.  Hmm.
So after I got off the phone, and while I was waiting for a friend to stop by, I did a quick inventory of the
fabric rugs.  Then I sat down at the computer and checked them off.
To my shock and horror, I realized that there are 30+ rugs on the shelves, that are NOT on my web site.
This is very disturbing.  very.  It means that I have somewhere along the way screwed up big time.
And you can't sell it if it isn't up there.  No rocket science there.
So tomorrow morning, I have a job to do, pictures of the rugs, putting them on my site, straightening it out.
But right now, I have to watch American Idol, and make some popcorn.
Go, Scotty, go.

It's always bothered me that people can just be so heartless as to let their pets wander. Jeez, I have a stroke if my pets just slip out of the backyard and disappear for 5 minutes.

They sleep at night because they really don't care. The cat I have right now came from a litter of a pregnant female cat that was dumped on our horse farm years ago. People throw cats away like they do litter.

But enough angry talk. I'm glad you discovered the glitch and that you're on track to fixing it!

I'm such a sucker for cats--they are such connoisseurs of comfort, a beam of sunlight through the window, a warm place by the floor vent, the soft, velvety throw on the bed. I love the way they gravitate to warmth and comfort. I've been feeding the semi-feral cats at the park for several months now. Wish I had a barn so I could bring a few (the 4 almost tame ones I've come to know) to live on our property. Not so sure hubby would agree, though he has a soft spot for cats too!
Have to admit my house cats (2) sometimes annoy me by walking across the keyboard, half lay on it as I try to work! Still, I can't imagine working the long solitary hours on the computer without a tail flicking under my nose!

Yup, I don't get how some people can just abandon their pets. When I moved here from Montreal, I had two cats. A week or so before the planned 6 hours trip with the felines by car, I arranged to buy a carrier to keep them confined and mild sedation to keep them calm (with a test to make sure they took to it well a few days before the trip).

A woman I worked with heard me discussing these plans and suggested that it would be a lot easier to just leave them behind and get new cats once I was settled in. That's how people who abandon their pets think.

I hope BunnyNose will be okay. I hate that they just left him unneutered, then show back up with excuses...

Thank you so much for caring for the gold cat and Bunnynose. I admire you so much! Both of my kitties were 'throw aways'...one was found in a ditch as a tiny kitten. I just can't imagine people discarding a living creature, and I'm so happy there are people like you who are willing to step in and make life a little more comfortable for those less fortunate fur babies.

So sorry about the cats. But that's great news about the rugs. That's a lot of inventory to discover!

Great show last evening, although I think Scotty's performance was not one of his best. Glad that Casey got things worked out, and I still like Lauren a lot. Pia was the same old Pia, and is becoming a bit passe' for me!

It was a great show last night, wasn't it? What talent this go round!! And I do love Steve Tyler. I thought I would hate it without Simon, but I like it even more now.

Poor Ringo, and Pete! Hopefully his old family will take better care of him now. Atleast Ringo has you.