S
Still drawing/doodling, I  call it a relaxation technique......just now I'm using my ipad, and my Apple pencil, which I highly
recommend.  Such fun.
I 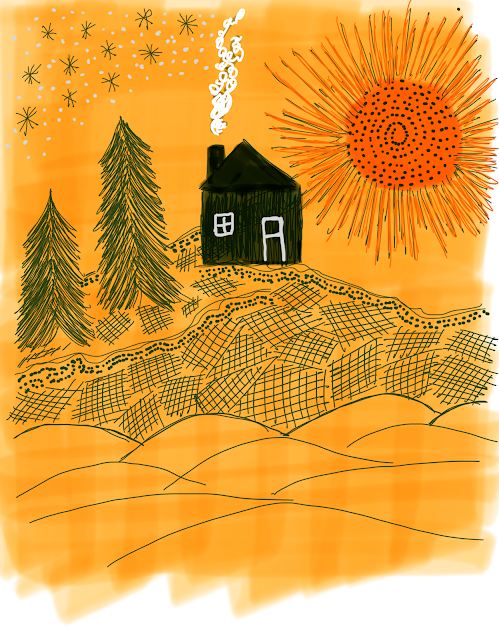 Even though I am not at my best of late, I seem to have found a way to be productive anyway,
and honestly, it helps me to get through this "big wait", without feeling like I'm wishing my
life away.
This one was woven by Lois, using a totally spontaneous kind of weaving, which she usually resists, but she's rocking it. 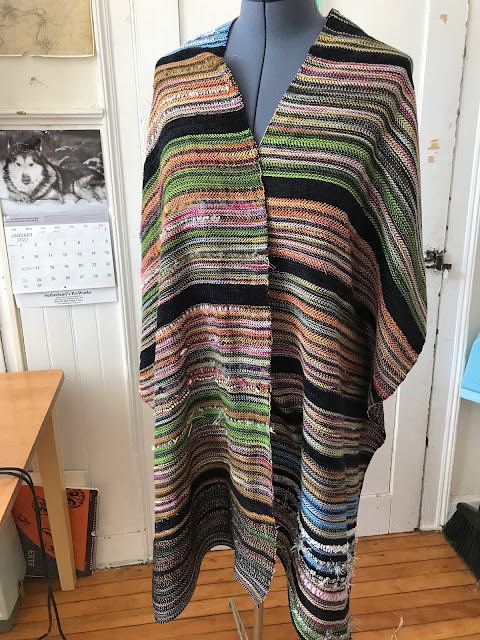 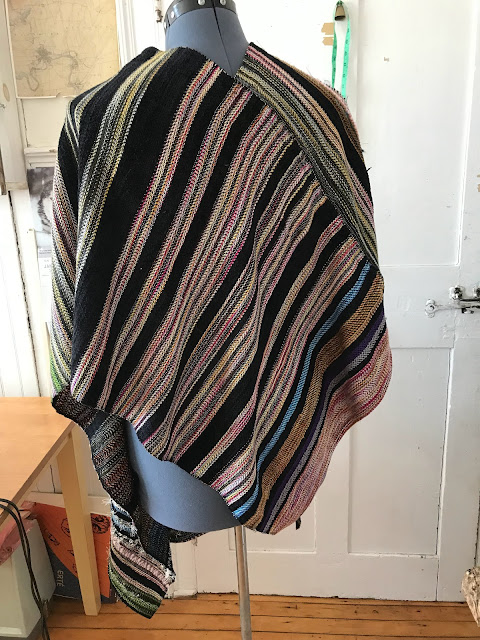 My oldest daughter, who hates me calling her the oldest.....but what should I call her???
my FIRST?   the first baby to arrive in my life???
Anyway, she is also a nurse, with a couple more degrees than I pursued, and she is also
employed by the NYS Dept. of Corrections, like I was.
She has done very well, working very hard, getting one promotion after the other.
Several years ago, when it became obvious that she had far surpassed  my accomplishments in
the Dept, someone asked me if that didn't upset me, that she had done so much better than I had.
I was appalled at that, and couldn't even believe anyone would ask such a thing.
My answer was a resounding NO, I am so, so proud of her, and as most mothers would be,
I am thrilled that she has done so well.
Jealous???  omg, how ridiculous........don't we always want our children to better us?
to be better? to be smarter?  to be more successful?  Happier even???
I sure do.
I feel like I've done my job, raising an accomplished young woman. 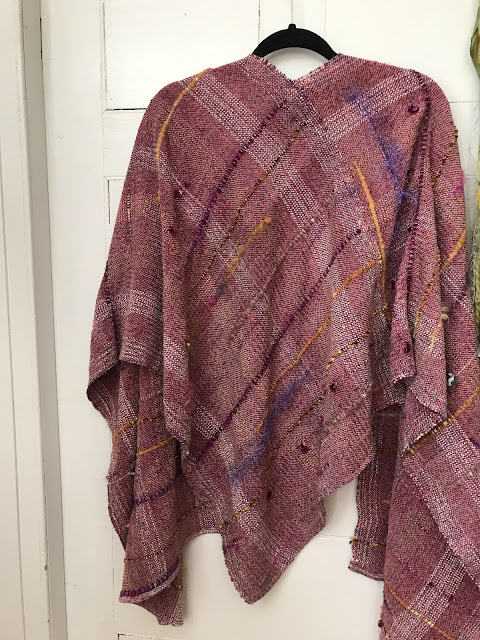 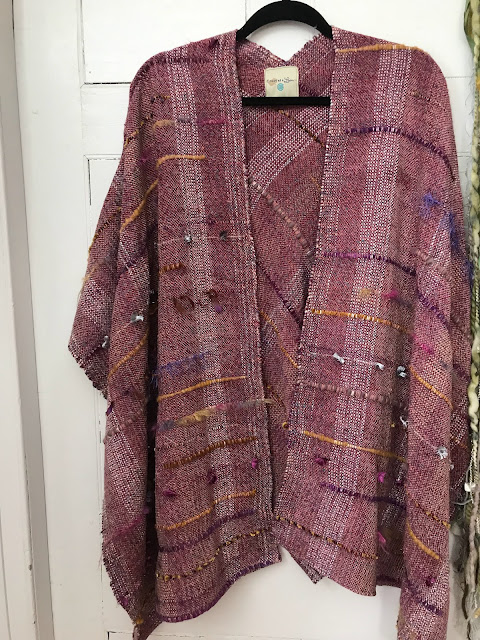 Over the years I have taught many, many people how to weave.  I wish, now, that I had kept track of them, but alas, I did not.
Several of them have become friends, but I have to say that ONE of them, has not
only become a dear, dear friend, but she has worked extremely hard, become
an accomplished weaver that I am very, very proud of.
She probably knows more about it than I do, and lately, she has taught me a couple of improved ways of doing things.
Teach an old dog new tricks????????
well, yes, apparently that's a thing.  LOL 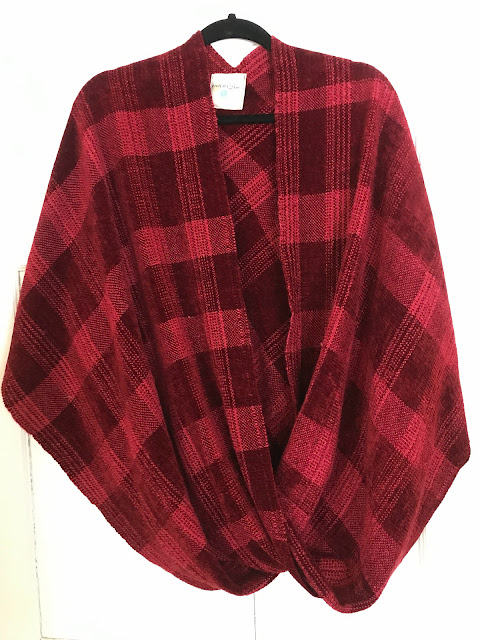 In the exact same way I am happy for my daughter, I am happy for my friend.  I am honored
to have been the one to have introduced her to the world of weaving.  The more proficient
she becomes, the happier I am.  I want her to be better, and to carry on long after I'm gone.
I feel like I've done my job, bringing a zealous weaver into the world.
She asked me the other day if maybe she was a little too obsessed with weaving. 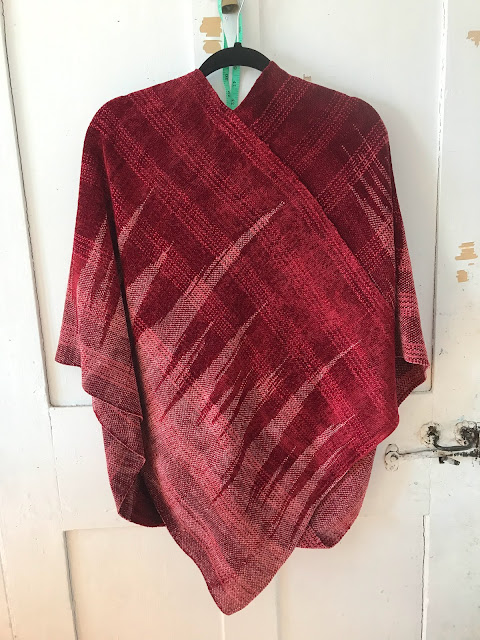 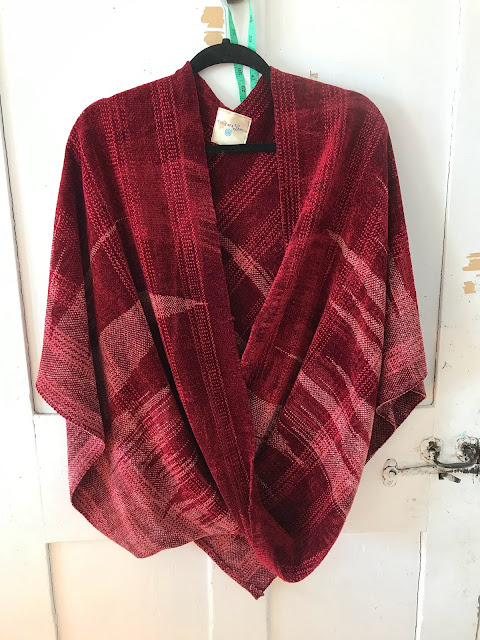 It still makes me incredibly happy, and I love all of it, even the tedious parts
of it. 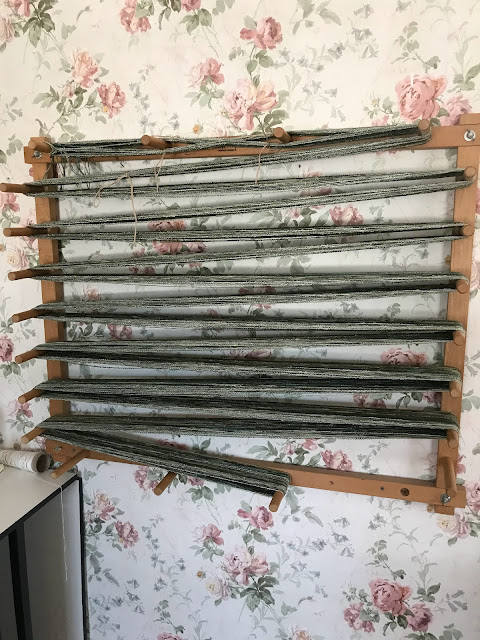 Even as I'm weaving one warp, I am thinking of the next one, planning the next
project, and the next.
What could be better. 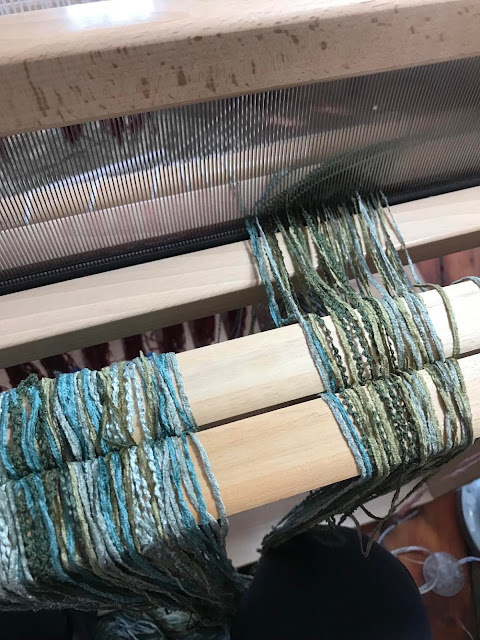 Cold wintry days call for some comfort food, and french onion soup fills the bill.
I usually make enough soup for the week, because Lois and I don't mind eating it every day. 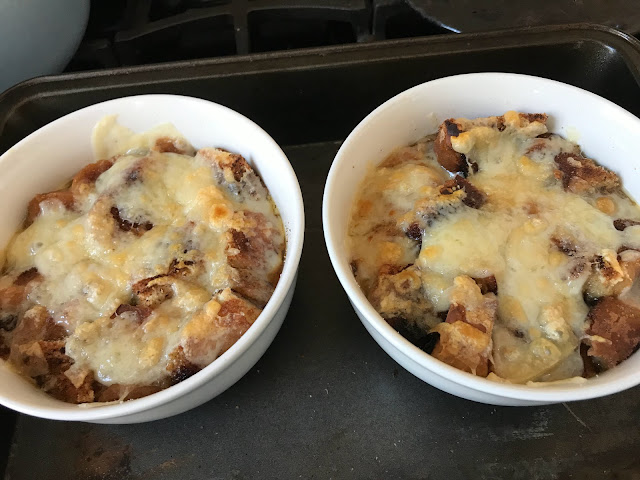 This old cupboard is just inside my back door, and the drawers have been FULL of JUNK for as long as it's been there.
Until now. 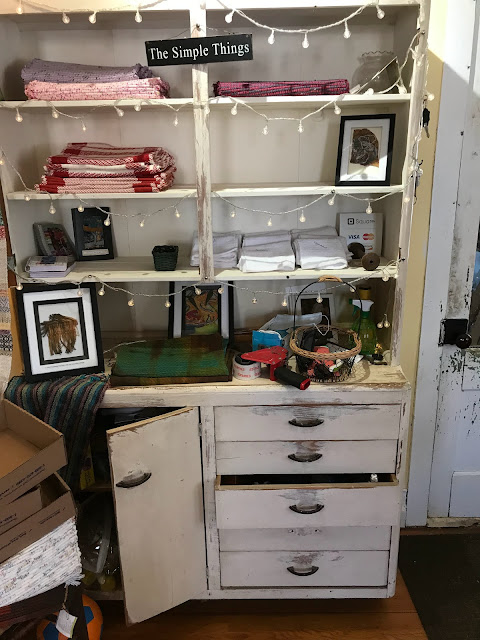 I took each one, dumped it into a box, and sat at the kitchen counter and went through every single piece of it.  I now have two well organized drawers, and three EMPTY drawers, that I plan to put the grandkids coloring/craft supplies in.
I also went through all the "manuals" stashed away in another drawer, some of them for things we don't even have anymore. 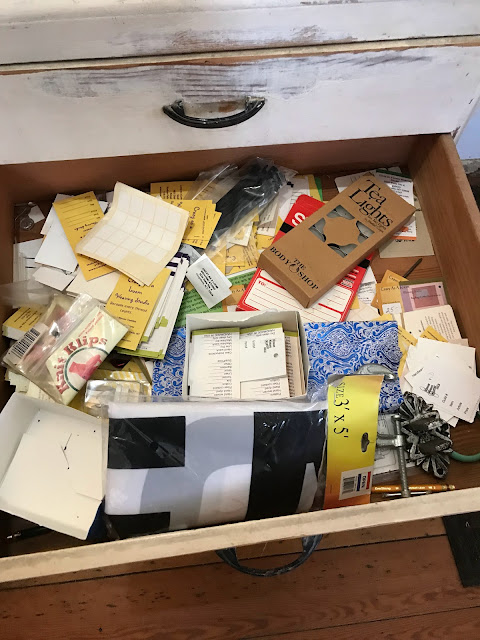 I took two finished pieces off the Louet, here's the first.  Rayon and rayon chenille
with funky inlays. 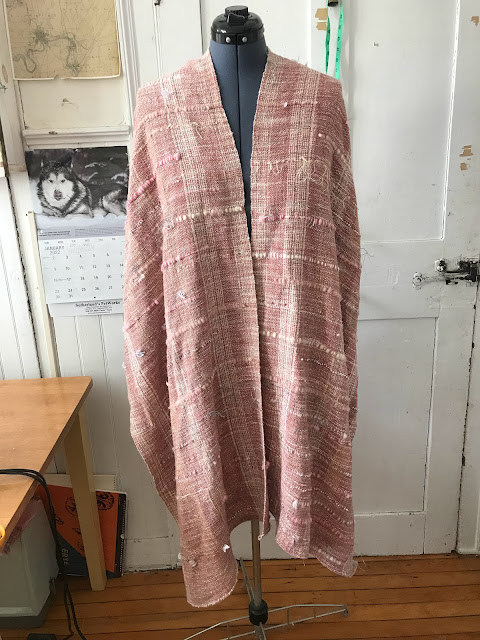 I think it's a little long in the front, so I need to rethink that.
The fringe didn't work out, chenille fringe is such a PITA.   So I'm trying to decide what
I might put on the bottom front pieces instead.
I do like the style, with the point in the back.
There are actually some beads inlaid into it. 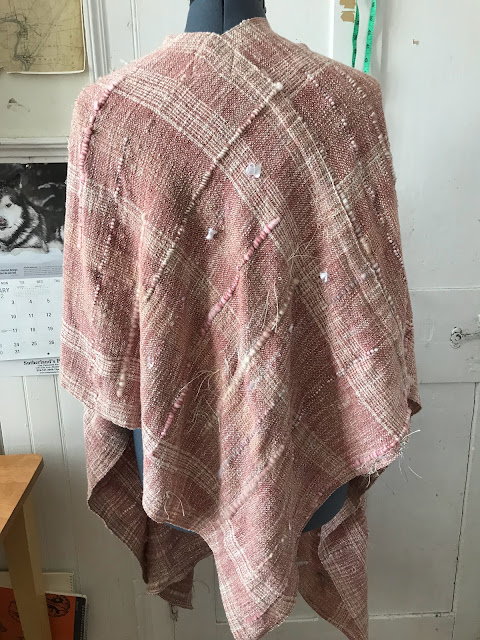 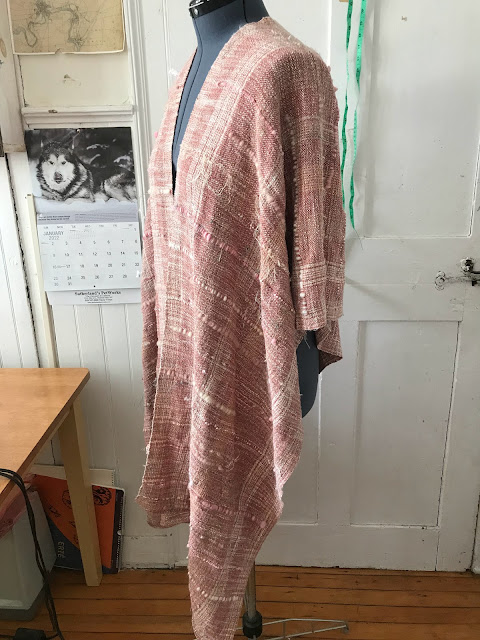 I have had a hot tub for 20 years or there abouts, and still love it.  But the other night, when I went to get in it, I realized that the display panel was DARK......luckily, my Spa guy, that sold it to me, did NOT go south for the winter.  He just left, and will order the part it needs.
I found a handyman/snow shoveler on FB marketplace, nice kid, who just cleared all the pathways that I need around here......to the garbage bin shed, to the propane tank, the side of the house where the oil tank in the cellar gets filled, the bird feeders, the dog yard.
Grateful.......hot tub will be in top condtion soon, and I can get around to the places I need to go.
I usually shovel these myself, but the medications I am on until my ablation make me
very short of breath on any exertion.
So that's not going to happen. 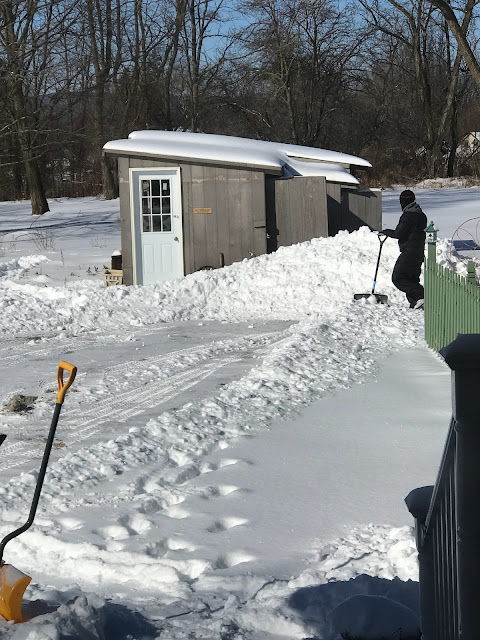 Thank you for all your kind comments.........using the random number generator, the winner of the towel is RITA from Fargo!!!!  So Rita, email me your mailing info.....crazyasaloom@aol
Here is a photo of my towel cupboard........let me know if you have any preference.......I can always send you photos. 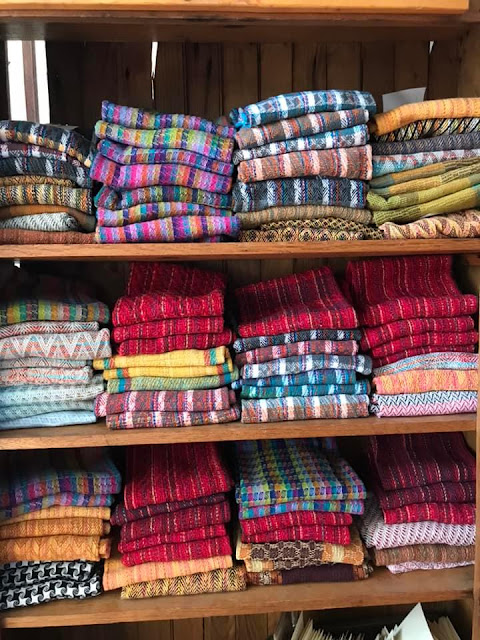 Is it that time again

Once again, I have this urge to "clean house", and I don't particularly mean vacuum, dust, etc.
No, I mean "get rid of stuff you don't need".
I don't think I can do the same minimalist challenge that I did last year at this time, when I got rid of over 600 items, NONE of which I have missed for one minute, but I still think, no, I KNOW, that I have JUNK.
Thank god for friends with great ideas, because honestly, I would never that thought this would make me so happy, but it did.
These shelves have been on this wall for years......and up until a few days ago, they were FULL.  They had so many cones stacked up, that a couple of the boards had begun to warp.
My good friend Sue came over to help me go through my pretty significant stash
of yarn.   We went through it cone by cone, and if it broke easily, was ugly, or had just been around for YEARS, then it was bagged up and put on the inside porch.  When we were done, we had 18 garbage bags full.   Facebook marketplace to the rescue........free yarn, you have to take it all, and you have to pick it up.  It was gone the next day. 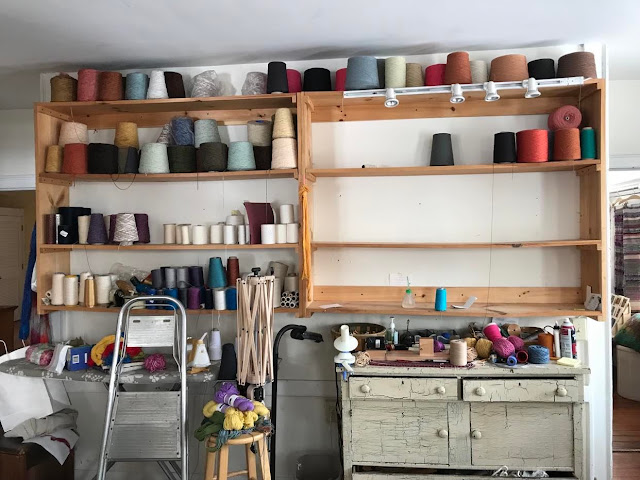 Now I have to paint the wall.
But it's incredible how much this simple act made the room brighter, and more open.
I love it.
And because I got rid of all the yarn that I would NEVER use, I suddenly had
more room for the yarn that I actually will use.
Keeping in the spirit of things, I have gone through drawers, cupboards, nooks and crannies and I've sold a ton of stuff that I don't need.....again, FB marketplace.
I feel lighter already. 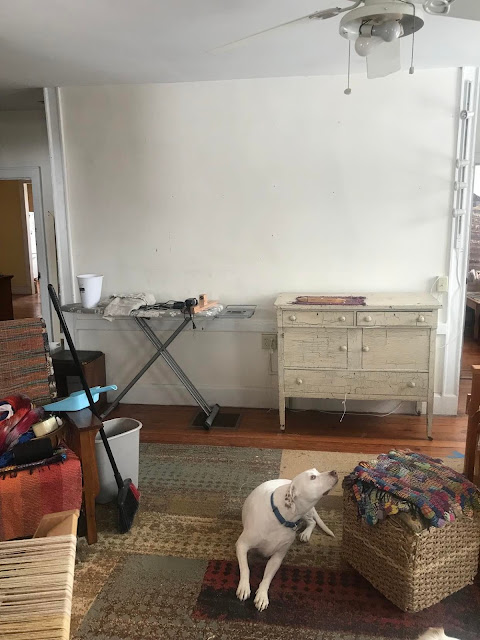 On the Louet, in an effort to USE the yarn that I kept, I dug into my chenille stash, and I'm weaving some "mauve" fabric for clothing. 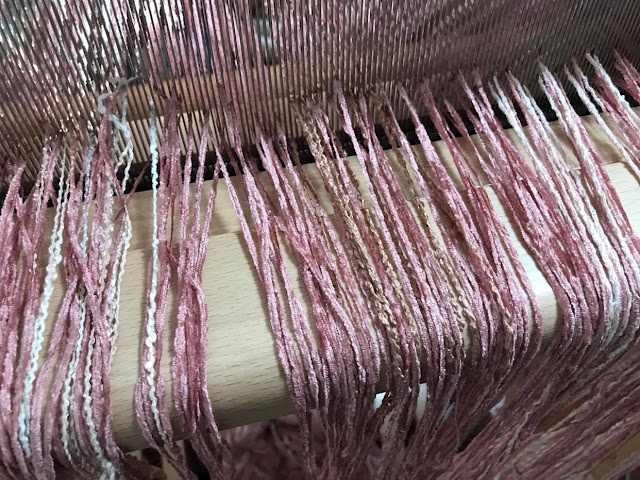 I am once again reminded that plain weave has its appeal.  It's soothing, and calming, and I am loving it.  It brings me right back to that newbie weaver that I once was, enamored of the simple beauty of plain weave,  and reminds me of that feeling that I had, that I had found what I wanted to with my life. 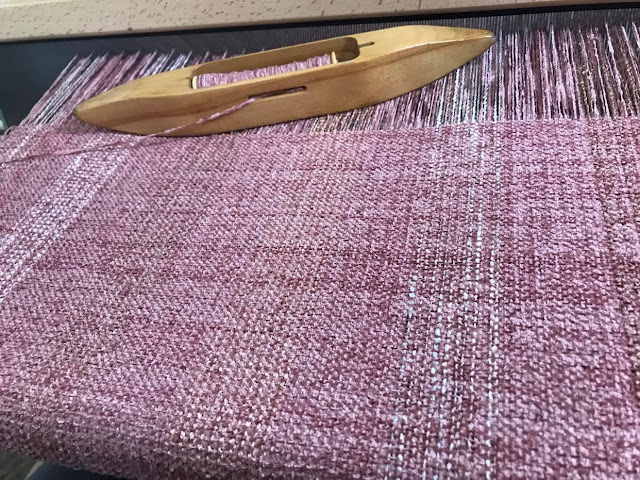 Alas, I will never be an artist, and if I was, I'm afraid it might be a cartoon artist.
But nevertheless, I am making each day my own, and that's all that really matters anyway.
Ya think????? 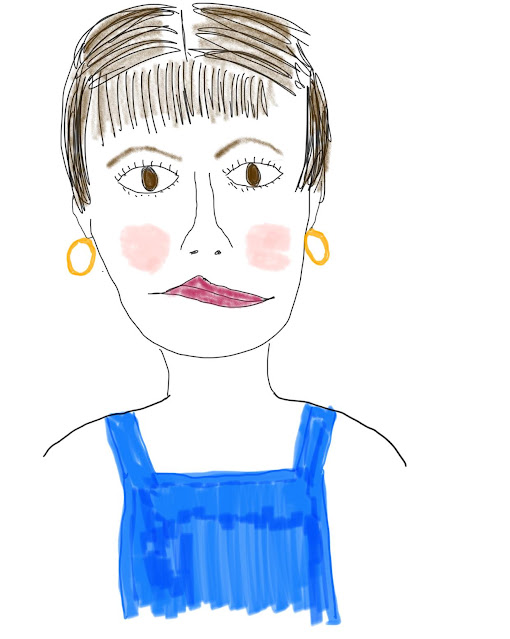