The kids are gone, it is finally quiet. I am ashamed to say that I just had an argument with my 86 year old mother.
My oldest daughter took her to the Salvation Army today, and it seems that the pastor did a bit of "Catholic bashing", which my daughter did NOT appreciate.  So much did she NOT appreciate it, that she said she would not go again, ever.
The only reason I dodged the bullet today was the fact that I had three kids in tow.
So.....
Can you even imagine?
My mother is super upset.
And dopey me, tried to make her understand my daughter's point of view, and ultimately I  made it worse.
MUCH worse.
Not a good idea to debate with your ever rigid, very English, 86 year old mother, who very obviously has had some mental changes, and who is depressed to boot. Not a good idea at all.

The day didn't start off badly. 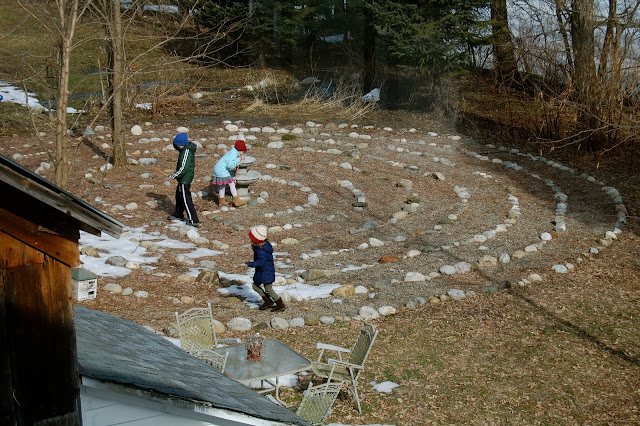 The kids were having a blast playing outside, and the snow had finally melted enough for them to run around the labyrinth.
I amused myself upstairs, where I could see them from the window. 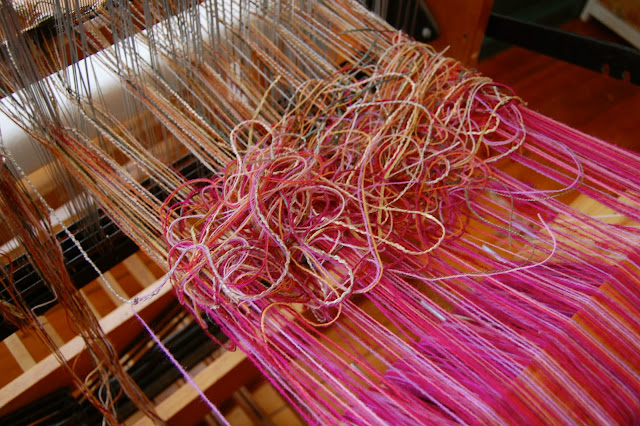 First, I tied on  the new warp, to the old one.
For those of you who want to know, I do this a lot.  I do it as much as I can get away with.  It is so much quicker than threading the heddles and the reed. 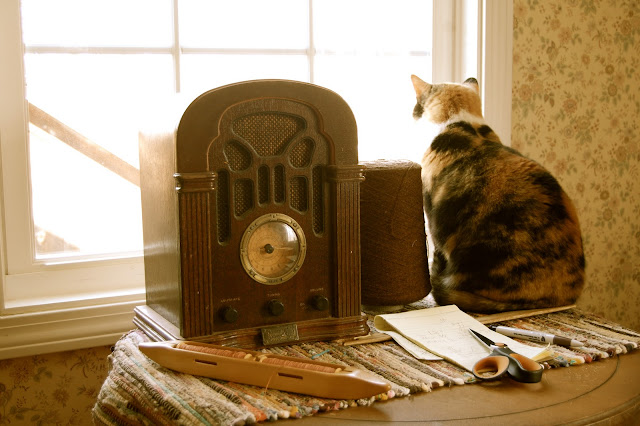 Of course, I had company.  Miss Puss, for all her bitchiness, loves me. 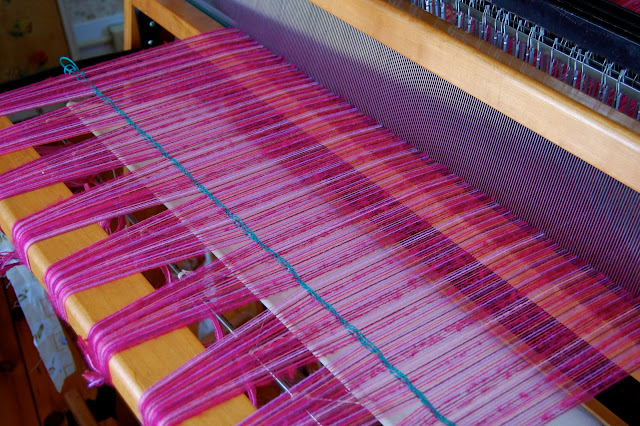 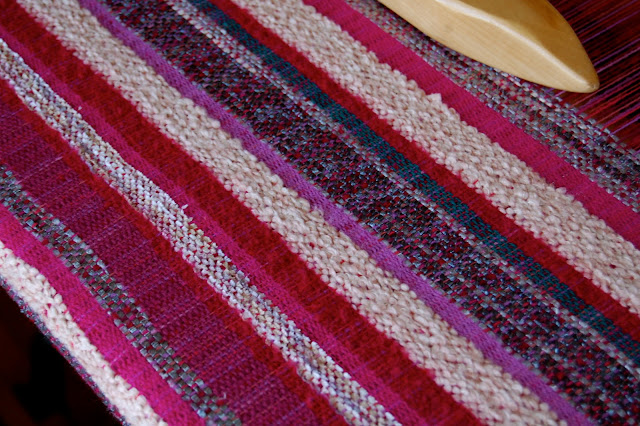 And if you wondered what I was going to do with this hot pink warp, here is my first shawl.  Is it too much??? 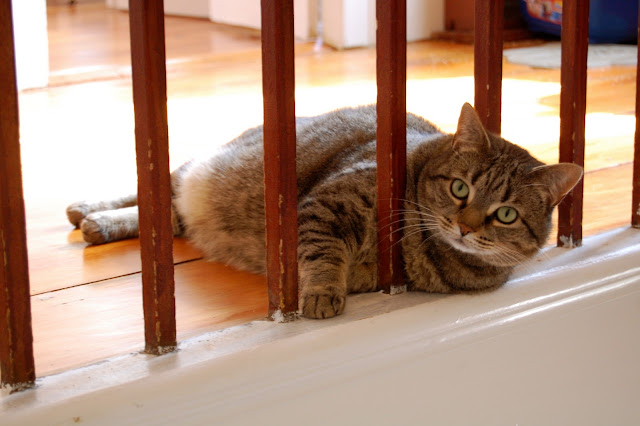 Sydney says:    Don't be upset.  This too shall pass.
Sydney talks a lot.

The pink shawl is bright, but someone is going to see it and love it. Not everyone wants muted tones. Sorry about the drama with da mama you had going on. Religion can be a real sore spot for some people.

No. I don't think it's too much. Lots of people really love bright colors. So sorry to hear about your mother. Who is the pastor? Your daughter must have been really upset to have said she'd never go again. Such a shame.

Hilary
Sorry about the drama. People and their religion.....the cause of many wars.
Love the new photos at the top of the post.

And I adore you big kitty Sydney. What a gorgeous doll!

Sorry about the tiff with your mom (and daughter's hurt too). Joycetta hit the nail on the head...

Too bad about that drama but I think Sydney knows what she's talking about. The shawl is lovely and so is the photo Miss Puss by the radio.

Oh dear...and my dear mother wonders why I won't go to church with her.
The pink just says Spring!
Love your labyrinth-

I tied on 200 ends this morning and grumbled that threading it would have been quicker and it might have been if I could be sure that I was doing it right. I know that there will be no errors that need fixing and that's a big plus.

I thought of you this week while I was meandering around the supermarket trailing after my mother. What I actually said to myself was "It could be worse, I could be sitting in a Sally Army service".

When you're caught in the middle there's no way out.

I'd say you were caught between a rock and a hard place there... intentions were perfectly good.

At 86 I suppose it would be hard to make new friends - perhaps one that goes to the Salvation Army and gets out of it the same things she does?

Loving that hot pink and your labyrinth caught my eye. We have one here in Sorrento Maine on the church grounds that we often walk. Sorry to hear of the drama. ~Lili

Hopefully, everyone will be back in good spirits in no time. In the meantime, it looks like you're having lots of fun in your studio. I tie onto my old warp as often as possible too! I love the pictures of your kitties. The bottom photo looks a lot like our kitty. :-)

P.S. That's so cool that you have a labyrinth in your backyard! I love those! I have to travel about 45 minutes to walk a public labyrinth. It's worth it though. :-)

I love your labyrinth! I wish I had the room for one here. I don't even know where there is one close by.
The pink is great! I really like the beginning of your first shawl. It'll be a great one.
Sorry about the mom (and daughter) thing. It is so hard to discuss eanything like religion without getting someone's hackles up. It was a rule in our family that we never spoke religion or politics around grandpa. (LOL)

Many years ago my 4 year old son attended Sunday school at a SA church. He went with my friend's children. I thought it would benefit him to learn about religion so he could make his own choices down the road. They had some strange ideas and one was to tell a 4 year old that he was 'dying' a bit each day and 'full of sin'. So when I found him crying in his room about this, I hit the roof and he NEVER went again. Yes, I spoke with the head guy and gave him a piece of my mind. I admire their good works with the homeless but they have some very strange dogma.

Elderly people are quite impressionable... just like my 4 year old. He's 35 now and just fine.

Thats a really nice header and I really like your choice of color!
I´m coming back for inspiration :)

politcs, religion, and elderly parents. Not a great combination.

Hope the feathers are smoothed down by now.

Such a shame--I'm a Protestant, but I do HATE Catholic bashing! Your poor mom is caught in the middle as she obviously derives some source of comfort from the services. Perhaps she might be persuaded to attend a nearby church instead.