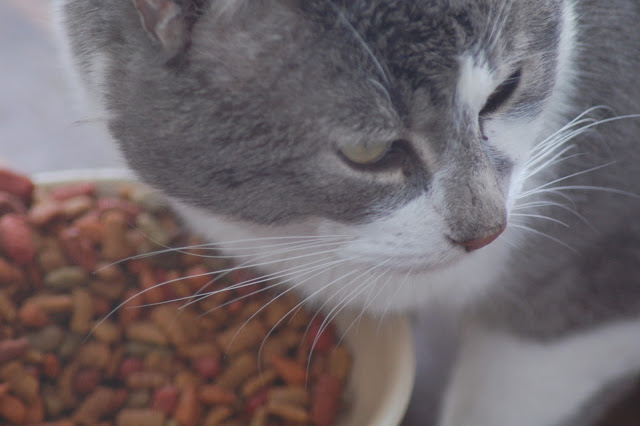 Not really......Bunnynose is FINE.   He is just not the neighborhood stud anymore.
"L" put the Havaheart out on the porch, baited it with mackerel,  and a few hours later, Bunnynose
was hunched down in there looking embarrassed.
She made a quick trip to the vets with him, and as luck would have it, they were doing surgeries when she got there,  and they whisked him right in.  He will be back home later this afternoon, probably wondering what the hell happened.
Interestingly enough, they didn't have any problems with him, except that he was scared, but he wasn't mean or aggressive at all.
Poor little guy, he apparently used to live across the road, until his owners moved away and left him behind.
Well, I think he has found a home.  He probably won't be wandering  around as much now that he is not going to be chasing women.
UPDATE:  "L" just called.....when she brought Bunnynose home, put the carrier down in front of the barn, and let him out, he shot out of there like a bullet, down the driveway, and straight across the highway with 4pm traffic.   She about had a heart attack, and no matter what she says, I know it wasn't the $55 that she was worried about.
Oh, yeah, I forgot to tell you, she doesn't like cats that well.
Ahem.
Oh, well, you can't blame the guy for having a bit of an attitude, now can you? 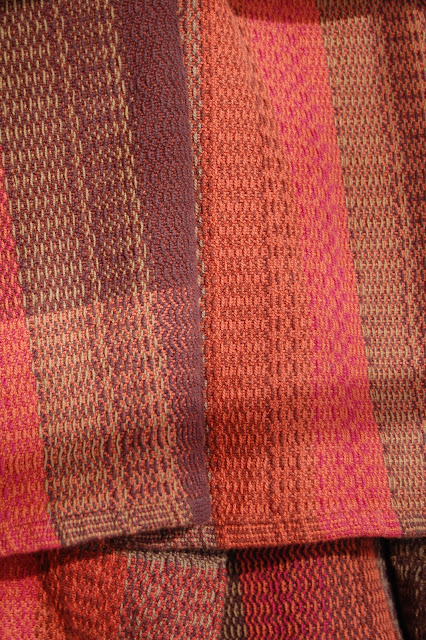 I have not been very effective this week, and that's OK.  For once in my life, I can give myself permission to NOT achieve much of anything at all. 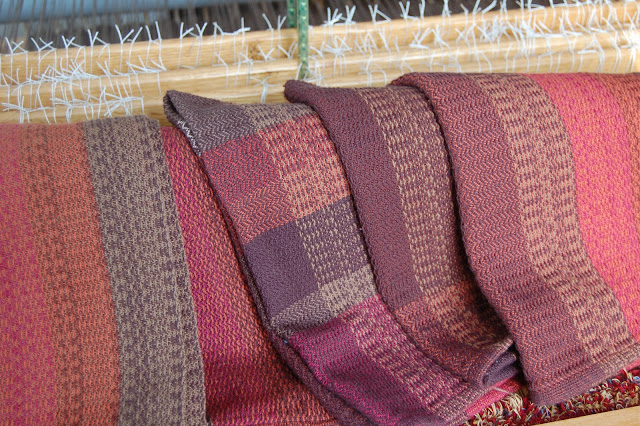 I just hemmed these towels last night....I have been working on them for awhile in front of my fireplace at home in the evenings.  They made me feel good, when they came out of the dryer, and looked so good, and felt so soft.  I actually felt better about being a slug.  Sometimes it is good to rest on your laurels, don't you think?
Now I am firmly planted on the couch, looking through some old Handwoven magazines, looking for inspiration, and maybe a little solace, too.
I appreciate your prayers, your concern, your kind words.  It is a family member I am worried for, someone I love so much.
I am staying strong, trying to stay positive, because that is what I need to do right now.
Thanks for caring.
Knowing that you are all out there thinking good thoughts is a bonus at the end of the day, one I am grateful for.

Keep praying and all will work out as it is meant to. :)

Those towels are just GORGEOUS!!! Beautiful!

Glad your Bunnynose friend has been snipped so he will not be contributing to more kitty cats on the streets.

You towels are beautiful.
Have faith that God has a plan.

Love the towels and I know exactly how wonderful that sofa time in the evening is. It's the deserts of my day. Thanks for what you do for the abandoned cats. Perhaps it's an extension on the responsibility you take for your family? If there were an Atta Girl Award, I'd certainly give it to you - for reals.

Those towels are FABULOUS! You have good reason to be proud!

Find peace in prayers, where you hand it all over to The Big Man.

Aw poor bunnynose, but wow poor L! That would be heart stopping!

You do Such! beautiful work.

Thoughts and prayers that all works out well for you and your loved ones. Debbie S

Still hugging you in my heart... thought of you the moment I woke up this morning.

That Bunnynose won't be so nosy no more looking for ladies... maybe he can be SnuggleBunny now?

I love those towels! What type of fiber do you use for those? I just got my little loom and I am practicing, with a goal to get good enough to make towels for my extended family for gifts. (One of many goals!) If you don't mind telling me I would love to know.
Prayers and good wishes to you and your family member. I hope all is going well.

Poor Bunnynose! I hope he finds a new home with someone who cares about him as much as you and L have, even if she claims she doesn't like cats!

Years ago, we were driving down a busy highway during rush hour and a cat darted out right in front of a car three ahead of us. The car hit the cat, he rolled to the side, and then darted right back in front of US! We couldn't help it - we hit him, too. Of course, we immediately pulled over, risked our lives out in the middle of the highway, scooping him up, and I really was sure he was gone. But he had a pulse, so we rushed him to a vet. Turned out he was FINE! Just stunned! Anyway, we took him home, put an ad in the paper, and the little ingrate ran away!

Enough of cats. The towels are so beautiful; I had to enlarge the pictures to get a look at the fibers. You're amazing!

Stay strong. There are a lot of friends who are here for you.

Gorgeous towels..I wouldn't ever use something that finely woven, just beautiful!
Poor kitty doesn't realize you were doing him a favor and also helping keep down the diseases and kitten population. Kudos to you for having him neutered! My heart gave a little jump when I read he ran across the highway - I'm a cat lover!
Keeping you in my thoughts and prayers

You did Bunnynose a HUGE favor. The poor guy, sad that he was abandoned. BUT.. he's got you and L to care for him now...what better place to be.

The towels look so soft, and the colors are warm. great job, as always.

I hope all is getting better for both your family and you. Trust in yourself and God.
All of your work is beautiful.
Good for Bunnynose - he'll be much healthier and happier.

At last! Bunnynose will forget all about his ordeal once he gets hungry enough. He'll live longer and procreate no more. Good job!

Gorgeous towels - your color sense is so amazing.

I LOVE the colors in those towels!!

Yay on de-studdifying Bunnynose. L must be a real sweetheart.

Hope all works out well for the family. No matter what, your love will be the best medicine. And you sure show a lot of love.

Whew!!!! I LOOOOOVE your kitties. Your work is so beautiful, thank you for sharing it. Your openness and honesty is wonderfully refreshing. Continued prayers.
Wild lilac is blooming on all of our local hillsides. Gawjus! The fragrance is pure heaven. Come on out to San Diego. :)
Gayle

Hey... Come on over. I'm having a nice giveaway to one lucky follower as soon as I hit the 300 mark!!

Beautiful towels. Positive thoughts to you.

I can feel how she felt! But good for her (and him) on the surgery.

I found your blog on This Old House 2 and weaving is on my list of 'things to learn"..haha! Beautiful work...