Today I was once again reminded of my limitations, and shortcomings.

When I got to the studio, there was a lot of snow.  No tracks from the barn to the porch.  So I took some water, and some cat food up to the loft in the barn.  Bunnynose peered out of the box where the heated pad is, as if to ask me what the heck I thought I was doing venturing into their home.
But I decided that since cats notoriously don't like to get their feet wet, that they would be staying up there until the storm ended, getting hungrier by the minute.
Then a while later, I looked out, and was surprised to see tracks coming from the other end of the porch. 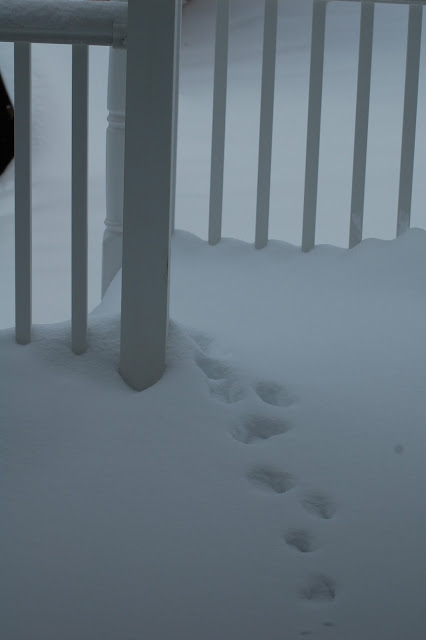 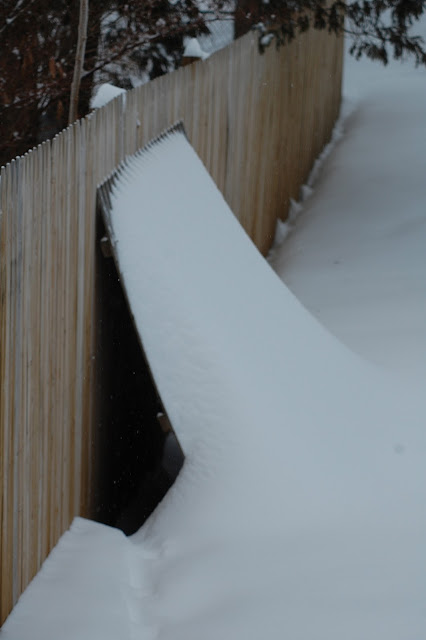 So if Bunnynose was in the barn, this was either Bubbalee, or SOMEONE ELSE.  Which goes to show,   AGAIN, that I am NOT THE BOSS OF THEM.

I had to keep going outside to yell at the crows.  I know that they need to eat, too, so I let them hang out for a while, then hollered.
They would stay away for a bit, or go next door, then they would be back, and we would repeat the process.
Someone asked me about bears, but I don't think there are any in our neighborhood, at least I have never seen them, or heard about them.

Obviously, the crows aren't starving.  They are all pretty plump. 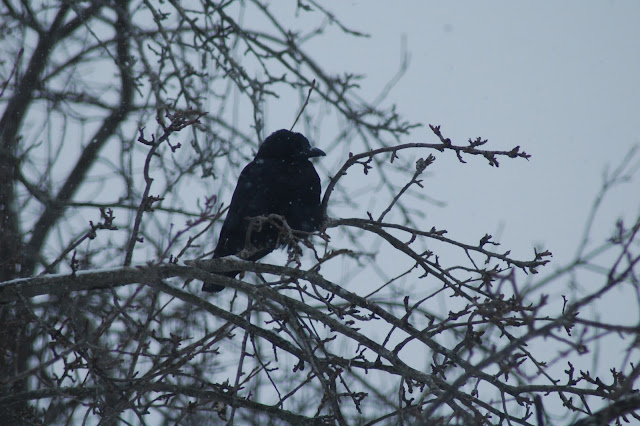 I worked on some more of the big totes, with the magical, bright colors. 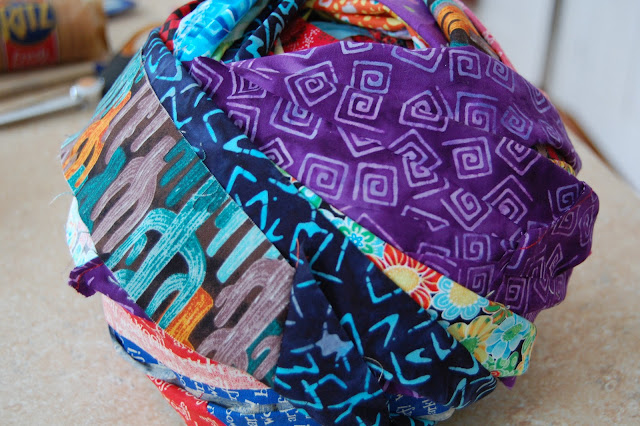 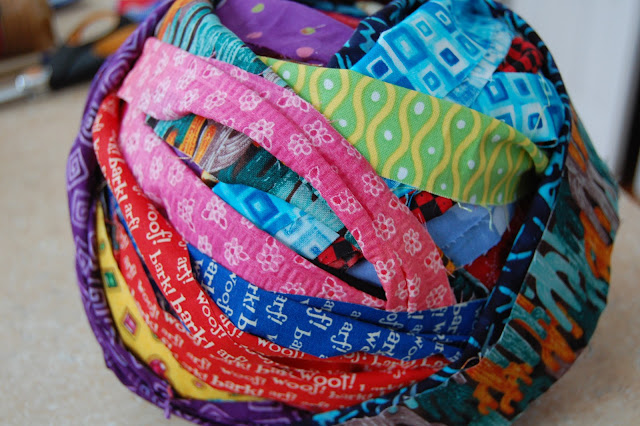 Occasionally, one of you asks me a question in the comments.  But I can't answer you if it comes up "no reply@blogger.com"
You have to register your email, if you want me to answer you, or you can email me directly, and ask away.
About the fabric, I have sewn all these strips together, and then wind them into balls,  then wind them on the shuttle, and weave the tote.

Now today was my (and DH's) wedding anniversary.  We've been married 9 years.  We got married on 2-2-02, because I figured it would be easy to remember, even if we got a little feeble minded.
But, that doesn't mean that I can't still screw it up.
I bought him a lovely card,  and DH sat in his chair reading it, and then he laughed.
He said, "This card says Happy Birthday."
Oops.
Well, it's the sentiment that counts, right?
Right?
It was a PERFECT card, right up to where it said, yup, Happy Birthday. 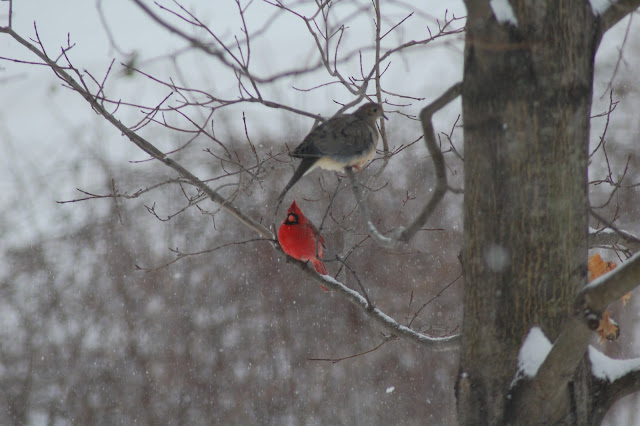 Now I must make a confession.
I speak for my dog, and my cats.  I carry on conversations, and I talk for both of us.
Yes, it's true.  So it isn't a stretch to talk for the birds, too.

So I imagined that this cardinal was saying, "Uh, ya' wanna get your tail outta my face?"
That got me thinking, so...... I googled it,  and this is what I found.

Why Do We Humanize Animals?
Anthropomorphism is the attribution of human motivations, characteristics, and behaviors to nonhuman entities. The word originated in ancient Greece, from the Greek words for “man” and “form,” to describe the characterization of pagan gods (and eventually the Judeo-Christian God) in human terms. When humans do not have cognitive access to something, or the ability to experience, understand, or communicate with it, we often try to make sense of it by viewing it as an extension of ourselves. We assume its thought processes and motivations are similar to ours. We identify.
People are more likely to anthropomorphize things or beings that look and act like us: animals that have faces, for example, or that walk. We’re more likely to personify a dog than a tree, or a bear than a snake. By imbuing animals with human characteristics and thought patterns, we shorten the distance between us. We start to see their behavior as either positive or negative, and we become sympathetic or, stronger still, empathetic. This feeling of a “personal” relationship can benefit humans as much as it does the animals that rely on us for food and shelter. One recent Japanese study found that a dog’s gaze can increase the owner’s level of oxytocin, the feel-good hormone instrumental in social bonding.
Meanwhile........... 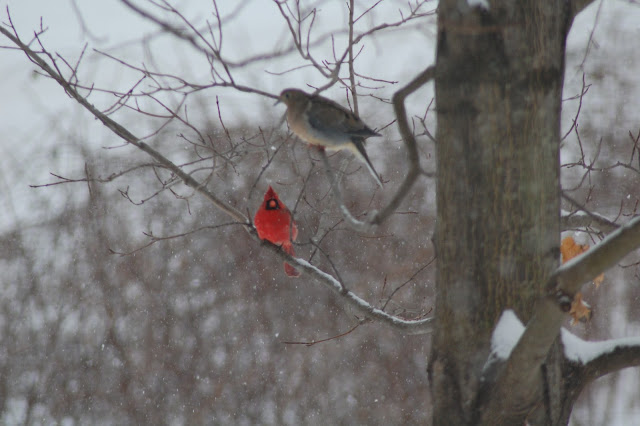 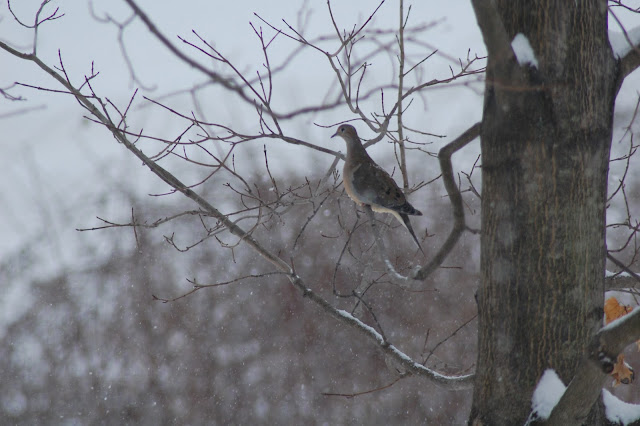 Happy Anniversary to you both. I did that with a wedding card once. It was perfect, but the wrong occasion :) Your birds are looking good. I only have one pair of cardinals here, they are my favorite.

LOL!!!... yeah, I'm about that good with anniversary cards too.. if I remember to get one. I know, terrible.

The cardinals, doves and a woodpecker were hanging out on my kitchen window feeder together today.. it was such a pretty sight.

Well, happy anniversary to you, then. I once gave someone a Bat Mitzvah card because I liked the balloons on front.

LOL! Thanks for the smile!

Happy anniversary! The crows aren't really plump, just fluffing up their down to trap air and keep warm. I love when I see the chickadees doing this, kind of like a body with a tiny little beak!

You got it right when you said "magical, bright colors". Love them!!!!! They will work up so nice in your totes.

Pictures of the are great!

I found this link last night and watched it an embarrassing number of times. Funny!