Ugh.  Everyone has been squirming all week, waiting for this spring blizzard that was promised us here in the north country.
It didn't happen.
April Fool???

It's OK.  I do not mind being fooled in this case.  Lots of drizzle, varying types of precipitation, gray skies. Good stuff. 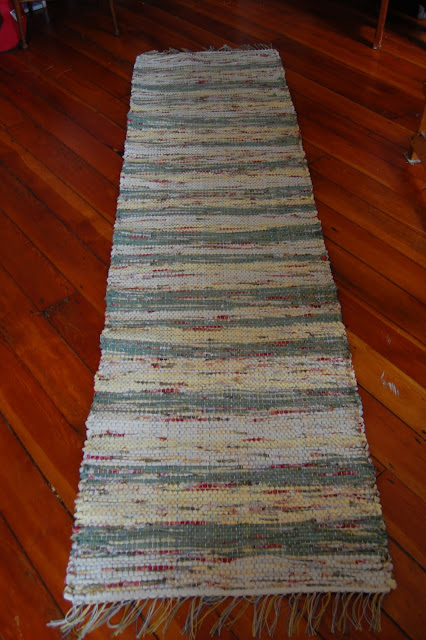 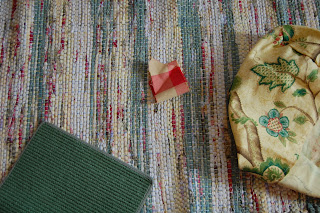 And took two other rugs off the loom that were underneath it. 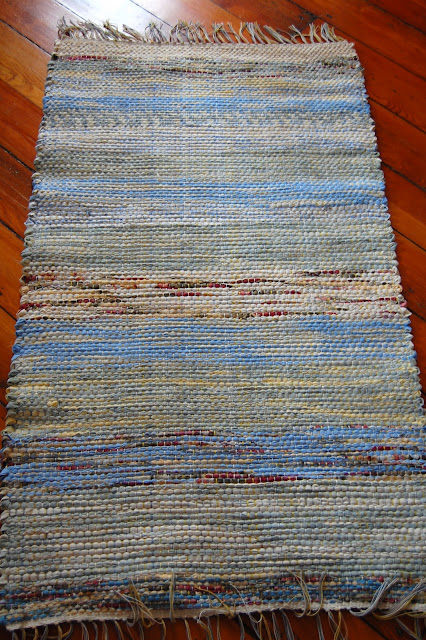 This is the time of the year that I start making rugs that look like spring to me. 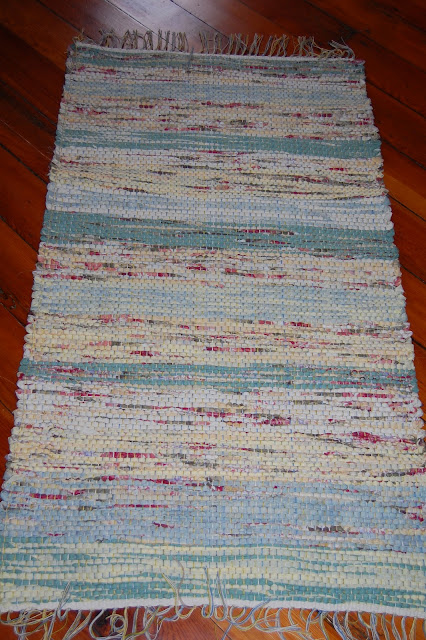 But today was a day of success.  We took Ringo to the vet today, and he came back  a little calmer, and a little less likely to pick fights with the other male cats in the neighborhood.  The vet said he is about a year and a half old, and he has a heart murmur.  He is also very friendly,  he came right up on the porch, and wanted attention.  He purred and cried, and was definitely more interested in getting petted, than he was in getting fed.  I almost felt guilty putting him in the carrier and taking him to be neutered.
Almost.
L said that she hoped he didn't belong to anyone.
Well, if he did, they are lousy cat owners.  He  is fighting his way across town, he is skinny, and crying, and his life is at risk every day.
He is one more cat that I wish I could find a home for.  L let him go, but he didn't go far.  He was still on the porch when she left.
So many homeless cats, so few people who want them.
It keeps me awake some nights.  I know that I am doing what I can.
Why doesn't it feel like it's enough?

OK, now for a quiz, kind of.
Really.
A lady emailed me, and asked me if I could weave some shmatas for her.
I said, HUH?
So, finally, she sent me a piece of one.
Shmata means "rag", but she liked these so well, she had them on the arms of her couch.
Then someone came into her house and shrieked that they were just meant to wipe up spills! 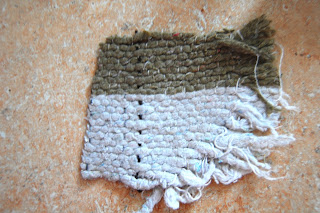 The warp appears to be 8/2, or something close.
The weft is a mystery.
Has anyone ever heard of these?  And what are they made of?
WTH is a shmata?

When I was about 11, on April Fools's Day, I decided to switch the salt and the sugar.  It was a foolish thing to do, but hey, I was a kid, and it seemed like a good idea.  I did it specifically to trick my mother, since she was the tea drinker.  I remember it clearly, she put two big heaping teaspoons of what she thought was sugar in her tea.  Then she took a big gulp, promptly spit it out, and screamed my name.
She was very angry, and as I recall, she didn't forgive me right away.
Tonight, over dinner, while I was telling my granddaughter about my little April Fool prank, my mother looked straight at me, and said, WHO are you talking about????
Yup, you guessed it.
She has totally forgotten it.
I guess that means she has forgiven me.

My mom was the one who always pulled the April Fool's pranks. I always felt guilty over doing things like that. I don't now, but when I was a kid I sure did!
Hurray for Ringo! He will be a much happier and much healthier cat thanks to you!
That first rug that you did for an order would look beautiful running down my hallway. I am going to have to get o it and learn to make these rugs. Now I want a runner n there!

I'm totally laughing here.. I grew up hearing the words schmatta. It does indeed mean rag. "Pass me the schmatta.. I just spilled the orange juice." My cousin still uses the term all the time. It's a yiddish word.. slang perhaps.

Hilary, (feels like I'm talking to myself) you do much more than the average person for the feline strays. MUCH more. And it never will be enough. But that's the nature of giving and doing. You can't do it all but you do make a BIG difference. I admire you.. big time. No fooling.

love that you caught Ringo and had him neutered. maybe if he calms down and fattens up, you'll be able to find him a good home.

ooh. salted tea. yuck! i know your mom has good and bad days, but sometimes it must be nice to forget some things...

Schmatta, does indeed mean rag in yiddish...and one can also use it for what you're wearing (What, this old schmatta, I've had it for years!) and for a hair kerchief, etc.

You live in a time warp! I think we live on time string of sorts, nice to have a past so there is a future.

On the arm of her couch? ai ai ai.... Give that girl a doily or something. That shmatta would totally be ugly on a couch. It looks like a piece cut from the corner of a placemat.

LOL, well I hope if you take on the commission, you weave her something that is less schmatta looking! ;) As to cats and strays and their numbers, you do make a difference. It may not be in quantity but it makes a difference for that cat and that does a world of good.

Now you know I have to go google that. But I bet you did too, and I won't find anything usefull.

Ringo is a lucky dude to have you in his corner :-)

Just as others have said, what you do for the stray kitties is very admirable. My neighbor takes in/cares for stray cats; we seem to get the stray or lost dogs. Fortunately we've usually been able to find the dogs' owners.