The insane cleaning continues.
Ack.
Today was the kitchen, and the downstairs bathroom.
L told me the bathroom was a one person job, since it was so small.
And since it is my house.......you get the picture. 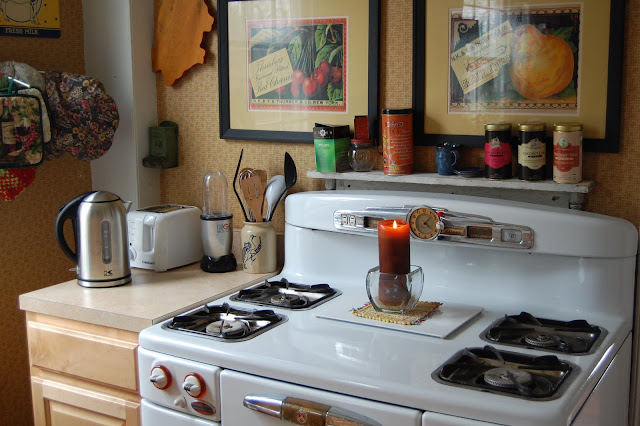 My old Tappan range.   How I love this old stove.  When I sold my house in the country, I figured I had to let it go, since the cupboards had been built around its odd size.  But the buyers made a face, and I knew that they didn't want it.   I was thrilled!!!  Ecstatic!!!!
My husband.......not so much.  It was heavy and hard to move.
But it looks like it belongs to this old house, and it makes me very happy. 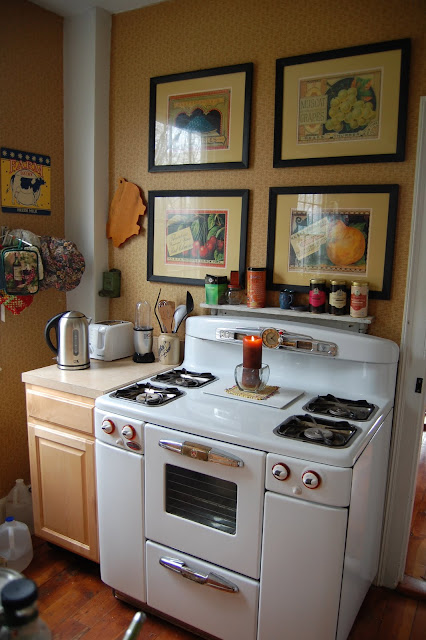 Kitchens normally get dirty, but a kitchen in a WEAVING STUDIO.....omg, we are talking 'super dust' here. 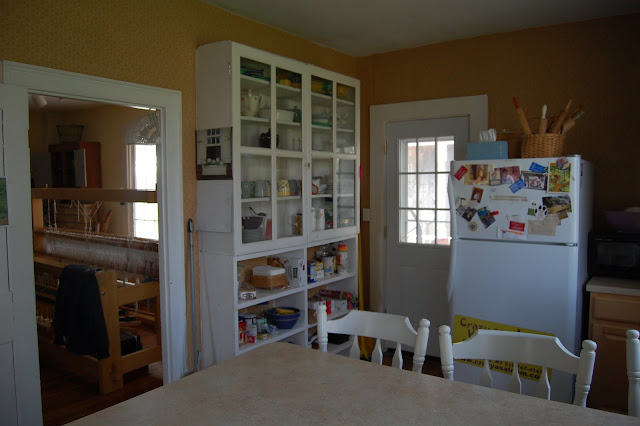 When I bought the house, this room had a water pipe sticking out of the floor, and a gas line.  It also had a completely disgusting old refrigerator that went straight to the dump.
I wanted to have a working kitchen, but I wanted it to look like it belonged in the house.  I didn't want to rip walls down, and end up with a 'magazine' kitchen, as beautiful as they are. I wanted an old house kitchen, cause that's just how I am. 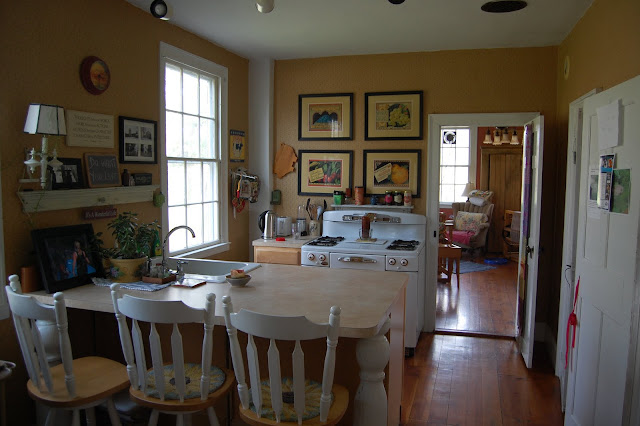 I used the porch posts from my old house, to hold the counter up, there's one on each side.


The framed veggie prints over the stove are gifts from my daughters, in an effort to replace the old ones I had when they were little.  I'm not saying that my ex husband's girlfriend sold them at a garage sale, but I suppose that could have happened. 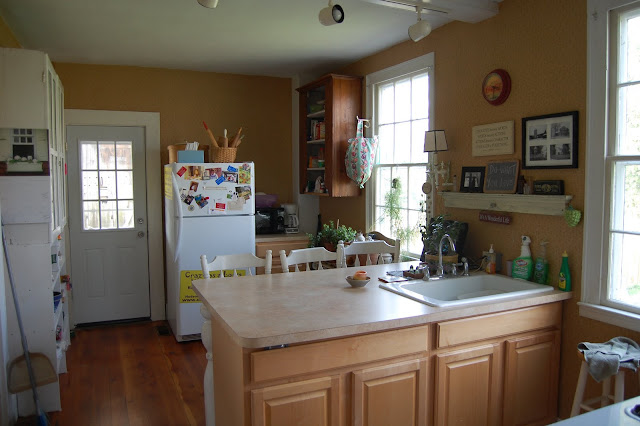 Some of you asked for the recipe for my Quinoa Fruit Salad.
You want the original, or my version of it????
I will give you both.

OK, first you cook 2 cups of quinoa in 2 cups of water, bring it to a boil, reduce heat, cover and cook over low heat until water is absorbed.  Just like rice.

In a bowl, mix the quinoa with a variety of dried fruit.
The recipe called for:
1 and 1/2 cups of dried apricots and I did put these in.

I didn't add these last four.....instead, I went to the bulk organic aisle, and I bought a couple of bags of mixed dried fruit and nuts.  One of them had sunflower seeds in them.  I think any of these combos would work, whatever rows your boat.

Toss them all together, and chill. 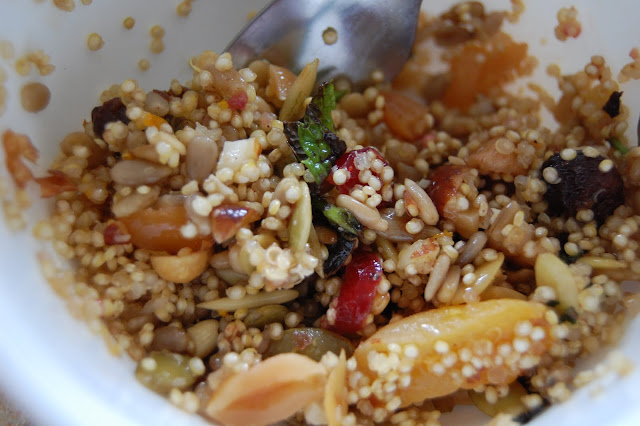 The result is YUMMY, but it is a little dry.  So I added, to my own little dish of it, a bit of strawberry balsamic vinaigrette, and it was perfect.
I had it for lunch, and my daughters took some home, so they probably had it for lunch too.  So if you aren't feeding a crowd, you could half this recipe.
It made a lot.
Good day, lots accomplished.  The weekend is rushing at me.  I will have grocery shopping to do for the Weaving Bootcamp, but the HOUSE will be ready.
The 30' rug is on its way to its new home, and I am somewhat disoriented, having a space of time where I can weave what I want.
But fear not, I will figure it out.
See me grinning???

I absolutely love your kitchen.. the stove makes it perfect. You have wonderful taste.. but I already knew that.

The recipe sounded wonderful right up until you said the C word. There are very few foods I dislike but I have an absolute aversion to cilantro. I'd be leaving it out. :)

That stove DOES belong there. I love your kitchen...it suits you to a tee.

YUM! Thanks for posting the salad recipe!

The stove is perfect. Why can't men appreciate the beauty in older well built stoves?? I'd rather have that they any old stainless steel one.

I agree with Hilary I do not like cilantro but like any other salad you can just leave it out. The recipe.

I love the kitchen and the stove and it is so cool it is in your weaving studio. Love it. Want it. I want to take class even though I know how to weave. I just like the atmosphere your studio seems to emanate.
ps. Thanks for posting the quinoa fruit salad, it sounds yummy.

it's neat to see the rest of the studio as a HOME! lovely!

Cute kitchen and I love the stove! Your quinoa fruit salad recipe looks delicious! I may have to give it a try. Thanks for sharing the recipe. :-)

Your kitchen is so neat and clean....love it's character.

The quinoa salad recipe is something I will try. Thanks for sharing.

I know that's your studio kitchen but it's neat that it's not a museum display but a working space.

Love, love, LOVE the stove.... we had to leave a big old monster at the last house, tried to talk the new owner out of it, but she loved it too!!!! Nothing says spring like a clean studio!!!!

Your kitchen is so warm and inviting... charming!!.. Love the old stove, glad you kept it. Hilary, anyone would feel comfortable living in your studio!!...

Your kitchen and home look homey and wonderful. Thank you for the recipe, it does sound yummy. I put quinoa in a soup yesterday,,,, ummmm.

Love love love the stove, I dream of stoves like yours living at my house...sigh, haven't found one yet. Also like that that you used your old porch pillars to hold up your counter top, clever girl. Missed seeing any kitties in the kitchen, are they hiding because of all the cleaning?

Hi Hilary. Thanks for your visit and kind comment. Yep, that's a beautiful stove... much more character than the new ones.

My Nana's stove was an ancient Hotpoint with two small ovens. She kept her cereal in one of them. The pilot helped it stay crisp.

I suppose the fire marshal would not have approved.

Before we moved to RI, we had an old Hardwick in our apartment. The oven was a bit small, as a third of that space was a heater, but I loved that stove.

I have a newish one now with bells and whistles. It came with the house and works ok, but I'd love an old one again when it dies. The new ones don't have pilots, which may well be safer, but how am I supposed to get the bread to rise on a chilly day?