One of those days.
I had an appointment with a podiatrist, in Amsterdam.  That's an hour away from me, but a friend of mine highly recommended him, and I have so far not been impressed by anyone I have been to.
So DH and I took a ride.
I insisted DH go with me, in case this new doctor wanted to stick a needle into my foot.
In which case, I would have BROKEN a few fingers.  What are husbands for???


This doctor does cryosurgery, which is not done by every podiatrist.  I thought he might do it on my painful right foot.  But he didn't.
He did an ultrasound of my foot, and showed me the damage inside my heel.  He scanned my feet for orthotics, and put a wrap/brace/strap around my right instep, which helped immediately.
I have plantar fasciitis, and he says that with this brace, then the orthotics, and exercise that is done every morning, BEFORE you get out of bed, this should be better in six weeks.  If it's not, then he might stick a needle in my foot.
OUCH.
I liked this doctor, and he told me more than anyone else had previously. He was worth the hour drive each way.

We stopped at the Waterwheel in Galway.....and bought wedges of the best cheddar cheese you have ever eaten.

Then we went over to a natural geyser in Saratoga Springs, where my husband lusted over, and drank, the most disgusting smelling water you have ever smelled.
Good God!!!!  How can you drink that?????  As he smiles, and guzzles.
His answer was that he has been doing this since he was a kid.
Well, there then, that explains it.
???
So I am almost to the studio, the day has flown by, and my cell phone rings.  Lois:  Where are YOU?
Seems the UPS truck that was supposed to come TOMORROW, decided to come TODAY.
WTH? 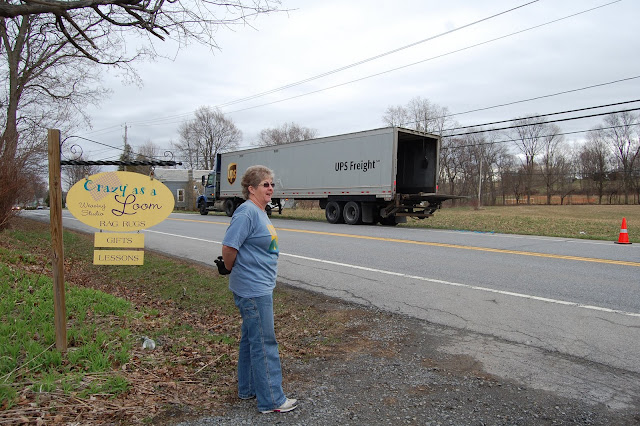 (Lois has her gloves on, which means that she means BUSINESS)

Check it out.  UPS truck on the OTHER side of the road.  A busy, state highway. 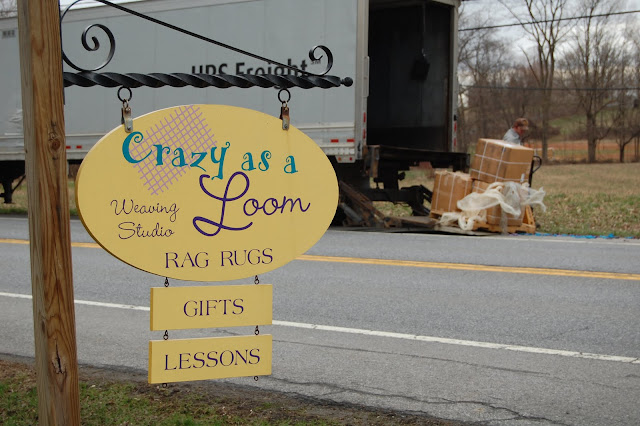 And boxes falling off the pallets.
And the help I had lined up to load these into the barn...........not available TODAY.
OK, then. 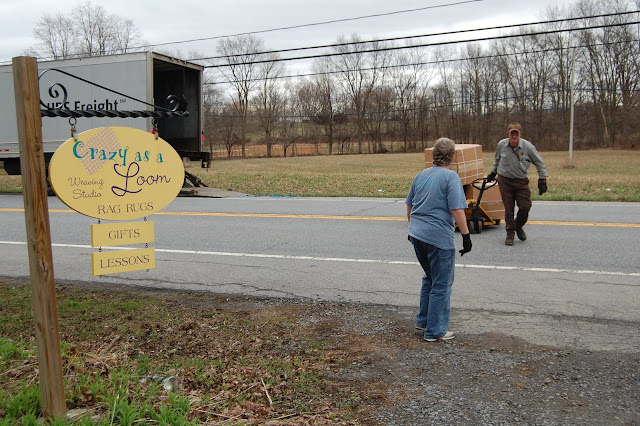 The UPS driver was VERY helpful, but he wasn't taking the traffic seriously, and I think this is where Lois is chewing him out.
GRIN.

Somehow we got them in the driveway, and parked them in front of the barn.  But there was no way that we were going to load 36 boxes from 65-85 lbs each into the barn.
Luckily, I made a couple of calls, and found a couple of helpers.  It wasn't long at all, and they were all tucked nicely away.
On my way home, it started to rain.
Yes, a little stress, a little work, a little inconvenience.

But am I complaining yet.
Not for a minute.

Oh good luck with your foot. My dad had planter fasciitis and he swears by his orthotic - "It just makes it all better" is what he keeps saying! Hope it does the same for you.

Sure hope the foot wrap and the exercises work for you. In my mind, surgery and needles are always last option. Thank goodness for 'L' in your life... she must be a real life saver for you at times.

glad you liked the podiatrist! i hope he's right and your troubles improve greatly! glad you were able to find some help to load in those boxes - especially w/ the rain! :)

No. No complaints needed. It didn't start raining until everything was put away, right? And hey, nobody got hurt. But the best part? The best part ever was that you found someone to care for your feet. I want to know if he can recommend someone in my area, or the Wilmington DE area. Cheers, Hilary!

I hope this helps your foot. I've been putting off going to see someone about mine. Your ups guy is crazy.

How fortunate that you have found such a competent podiatrist. Love your new header! The pic of the cat wearing one of your scarves is simple adorable!

Hilary,
I am glad your foot will be on the mend soon. I used to live not far from Amsterday in Scotia.

I love that water!! I was just thinking about it the other day and wished I could have some. When my DH tried some he thought it was disgusting!

I've had plantar (as has my husband and several of my friends). The best healing comes if you stop overusing the foot and wear the orthotic religiously. I got mine from running and finally realized that trying to continue to run was counter-productive. Good Luck!