Let me just say, that in spite of getting snow dumped on us, it was a pretty good day after all. 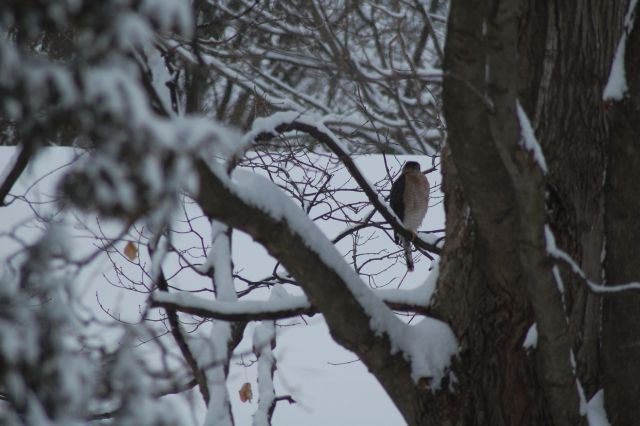 I think that this is a sharp shinned hawk.  But it might be a Cooper hawk.   I have studied pictures of both, and can't tell the difference.  I plodded out through the snow to get this picture.  This is as close as I could get before he took off. 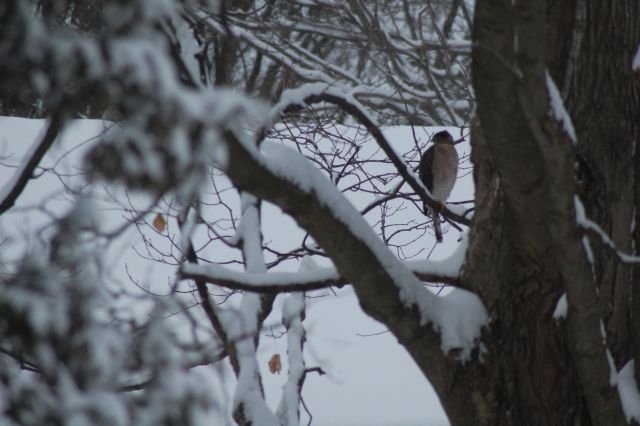 He was keeping his eye on the many birds out at the feeders. 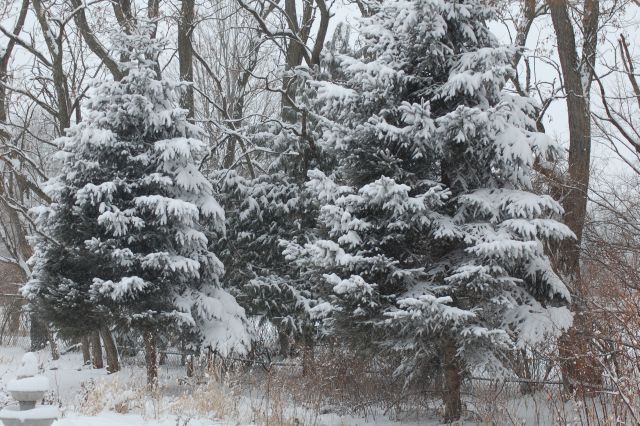 Today was a day when the birds appreciation of full bird feeders was all too evident. 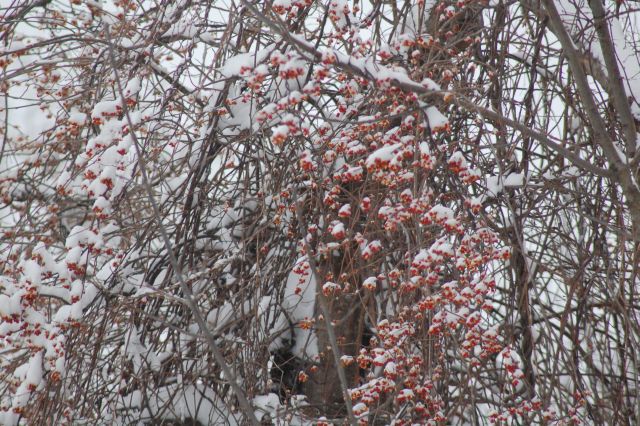 How about some frozen bittersweet? 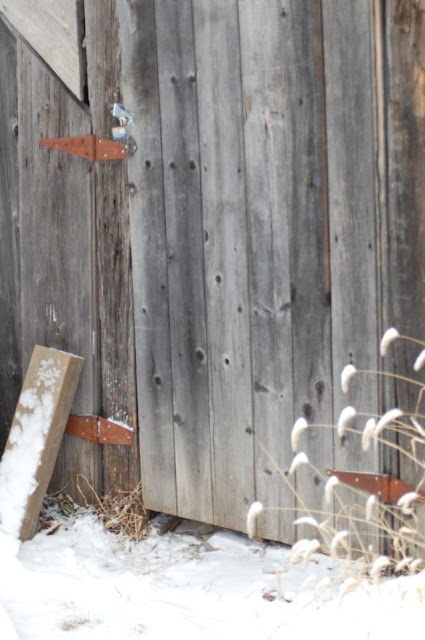 Bubbalee didn't come out of the loft all day......even though I shoveled all the way up to where she squeezes out under the door.

Then back to the Cranbrook.  I finished threading it, and then decided to do some reading about tying up the treadles on a countermarche loom.  You have to understand. I have had this loom for 6 years.  I have tried several times to get it up and running.  I put a warp on the sectional beam.  But every time I try to get it tied up, I am rewarded with ZERO shed.  That's the space where you throw the shuttle through.
No shed, no weaving.
So today, I was somewhat expecting failure, but hoping that today would be different.
While searching for literature on it, I found a 7 page copy of the instructions necessary to put the loom together.  As I was perusing it, I realized that their explanation of the tie up was incredibly simple.
Could it be that simple?
It showed a draft of blocks, it said tie the shaded blocks to the lower lamms, and tie the open blocks to the upper lamms, and do it on each treadle.
So I did.
Not that easily, of course, because I had to get this old body into a pretzel shape under this loom.  But I did it.
Now, on the top of the loom there are four pivot pins.  Two stay in, and two are put in while you are tying the loom up, to stabilize it. 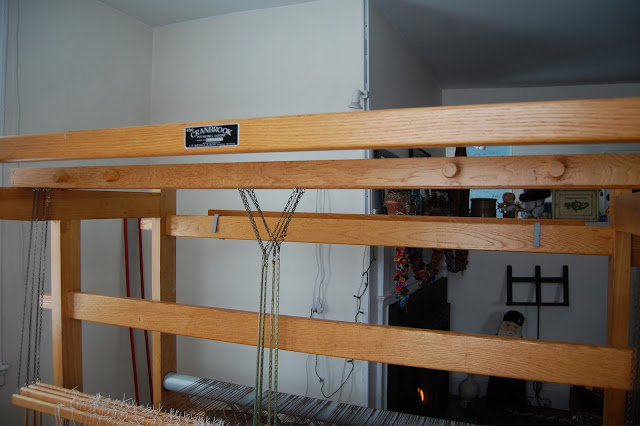 Do you see them?  Four round pins, two on each side of the loom?
OK, so I took two of them out, and stepped on the treadle. Nothing.  No shed.
Epithets ensued.
I stepped on the other treadle.  Nothing.  No shed.
More epithets.
The pages I had been reading were sitting in front of me on the loom.  For some reason, that I still can't explain, my eyes came to rest on one paragraph.  The one that said that TWO pins were removed for weaving #1 and #4, while the other two pins, #2, and #3, stayed in at all times.
So which were which??
I flipped back to the diagram, where the pins were numbered.
OMG.
I took out the wrong pins.  Today, the last time I tried to get this loom going, the time before that, and the time before that.
OMG.
So I put the #2 and #3 back in, and took out the #1 and #4.
I stepped on the treadle, and let out a WHOOP DE DOO!~~~~!!!!!!!!
Stepped on the other treadle, and OH MY  HEART BE STILL~~~!!!!!
I have a shed, a big shed.  Oh, yeah. 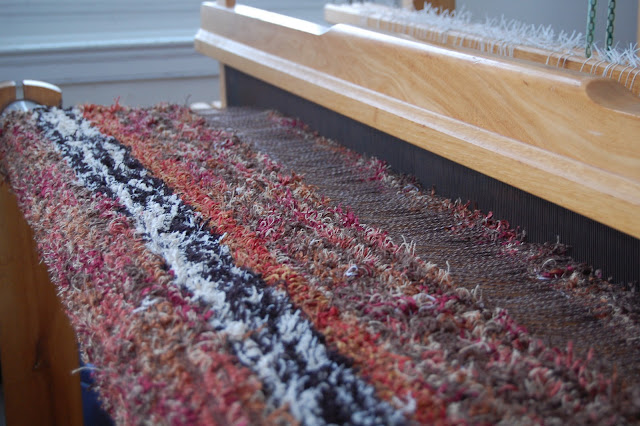 So I spent the rest of the afternoon weaving the first rug I have ever woven on this loom, but not the last.
Hallelujah, and AMEN.
Simple mistake, you say?
Epiphany, perhaps.
So I got to thinking on that, on the snowy ride home.
All this time, I have been blaming myself .......chastising myself, for being too dumb to GET THIS.
Too obtuse to understand the mechanism behind this particular kind of loom.  It was too hard.   Over my head, out of my scope.  Learning curve deadly.
I BELIEVED that I couldn't do it.  I BELIEVED that it was too difficult.
When in fact, it wasn't difficult at all.
I was being HOGTIED, so to speak, by one simple little error.  So small, that it was remedied in a matter of seconds.  FROZEN by my certainty that I would fail.
But I didn't.
Why?????  Because I wouldn't let it go.
Yup, there it is.  That pit bull mentality.
God, I love those dogs.
Posted by Hilary at 6:19 PM

Yay!!! So glad you got your countermarche to work!! And it's weird, but once you're over the intimidation, I find them awesome and wonderful looms!!!!

I think your hawk is a sharp-shinned because of its behavior watching birdfeeders. Cooper's hawks don't usually do that, but sharpies often do. The plumage is almost identical. And a small male Coopers and large female sharpie can look the same.

Thanks for going out in the snow to photograph it!

You did it!!! Being stubborn and hard-headed pays off - ask me how I know.

Hurray for you! I am glad it worked this time. It looks like a beautiful loom.

Congrats on getting that countermarche tied up! I'll be interested in learning if you like it, love it, or decide to move it on.

FYI, although I earlier commented on the attractive new header, I do have to say that I much prefer not having to scroll down to see if there's a new post - I didn't have to with the old header. Just a thought.

I am smiling from ear to ear over your success! It's so cool that you were able to perservere and make it work. YAY for you.
Love the pictures of the hawk. I ca't wait for some better weather to go out and use my camera that my girls got me for Christmas. So far all I have done with it is to take before pictures of the progress that is going to happen in my back yard.
I want to get all the fauna and flora around here when spring starts up.

Good job getting that neglected loom up and running! I know I love all my CM looms and hope this one becomes a favorite for you too. I bet she's a great one to weave at.
Beautiful hawk pic. Let's hope those chickadees and nuthatches are keeping their eyes peeled.

One thing I've learned in life is to NEVER give up. Pit-bull-like persistence has gotten me through many a rough spot in my life. Congratulations on getting that loom up and running. It feels good, doesn't it!

Amazing what a little attitude adjustment and reading the manual can do!

Looks like a Sharp Shinned to me, we have a pair that lives here in downtown DC across from the convention center and they swoop up and down Mass Ave- lovely. The two hawk breeds sound very different, too. Google sharp shinned hawk call for several good sites- they will have the Cooper's call too. SS sounds like a pileated woodpecker, Cooper's sounds like a monkey.
Kimmen