After yesterday, I said I was NOT going to get under that Toika, not for any reason, no how, no way.
Luckily, I didn't have to.
The weaving went well, from beginning to end. 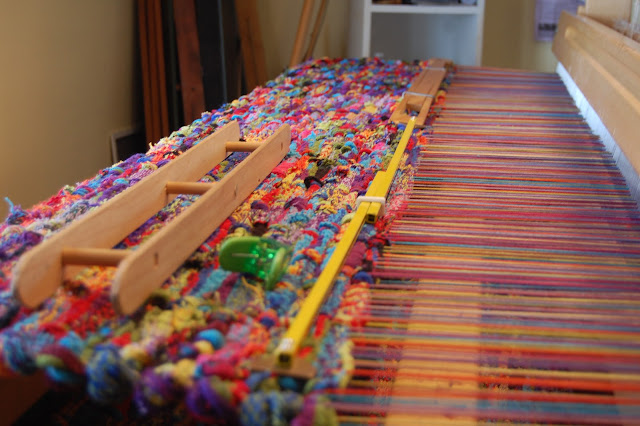 Even though this loom.......you called it the "Finnish monster", and I called it worse yesterday.........was hard to get to know, and hard to set up, weaving on it is a dream once you get going.

I sit on the right, "L" stands on the left.  I can't stand, because I can't reach the treadles if I do.
We chatted and wove, took a lunch break, and chatted and wove some more.
So, what do you think?
It measures 7' x 11'5" not counting the fringe. 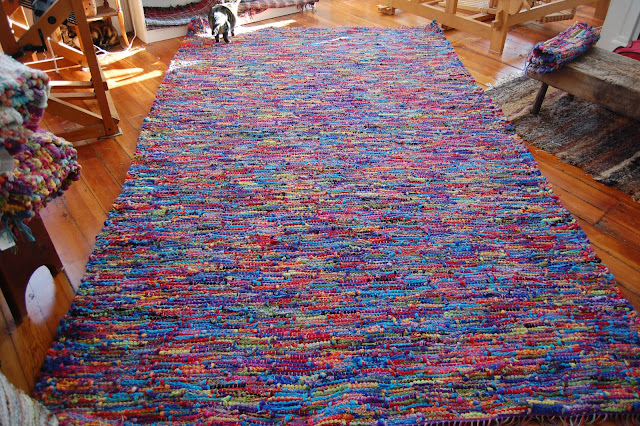 I am tired and thrilled to have it done.
Hallelujah!!!
Bravo to us!!!!!  We did a great job!!!
Tomorrow might be time for a little cleaning, organizing, moving things around.  It is supposed to snow here......again. Exciting.

Oh, yeah, the inspectors were on duty today.  Just in case you were wondering.  Not much gets by them. 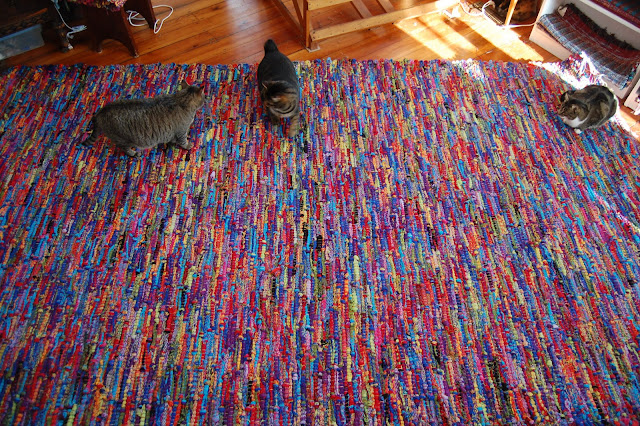 A couple of you suggested that I try to catch Bubbalee in the solar house.
There are a couple of reasons that isn't a good idea.
First off, I don't want to 'spoil' any of her safe places.  The loft, the porch, the solar house, are places where she feels safe.  I want her to stay warm in the solar house, so I don't want to make that a place that she is afraid to go.
Secondly, if you have ever trapped a feral/stray cat, their fear makes them do stupid things.  In the Havaheart, they jump and hurl themselves head first at the metal doors of the trap, until you cover it with a blanket.  They they quiet down.
Bubbalee could break the glass and get seriously hurt.
So where ever I put the Havaheart, and I am going to try again, it won't be in any of her safe places.  She has found a home, and we all know there is no place like home.
And I have to accept that I might never catch her.  And I will have to be OK with that.
At least, she won't go hungry, and she will have a safe place to have her kittens.
Some times you just have to let go.

I agree with all the ideas you have regarding bubbalee - you can't spoil her safe places or she will not trust YOU again.

LOVE the rug. OMG - the colors.. the texture! Awesomeness Hilary. Where you get the energy is way beyond me.

Yes, to awesomeness in that rug...WOW! And that is some loom--and yes I have spent some time under my larger looms, too!!! I think it is wonderful that Bubbalee has any safe places at all--she is a lucky girl.

This rug is GORGEOUS!!! I love it! The colors are so pretty! :-D

Wow, what a rug! It's wonderful!
How much do you think it weighs?

Oh wow that is so pretty! I love your sense of color.

Smart not to try to trap her in her safe places, especially when she's going to have kittens.
So glad you and the loom are coming to an understanding.

I thought about all those things you said too, which is why I prefaced my suggestion with...you may not want to do this....
I have to agree with all your reasoning.
That rug is gorgeous! Looks like a lot of work.
We are getting heat here. Such weird weather. I won't complain about it, because sure enough when I do, the powers that be will plunge us into a freeze!

Your rug is just fastastic! It's like yours is the big mother of all mothers, and mine is the itty bitty baby rug?

I am so insanely jealous of that loom...to weave rugs that size....just need to stop thinking about it. Beautiful. Just beautiful.
Blessing to you.

WOW! Love it - and the picture with the kitties dancing on it gives us the scale. That thing is HUGE! One day I want to weave one just like it.

What an awesome rug!!!

OMG...I think my heart stopped! Seriously...
I have an acute case of underfoot envy for whoever gets to take that sucker home! Absolutely stunning!

That rug is AMAZINGLY BEAUTIFUL!!! I am so impressed with its size, and with your talent.