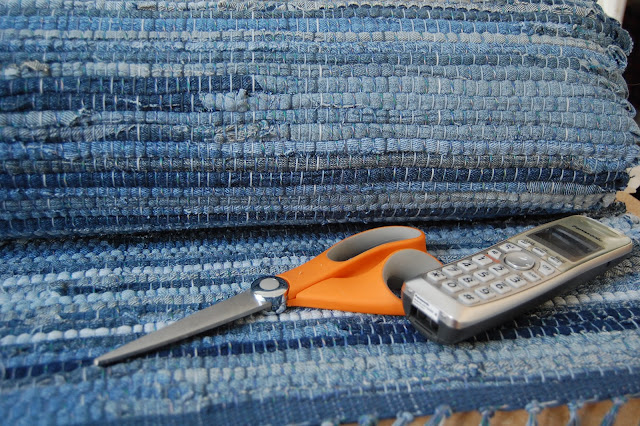 Sometimes when I tie fringe, I talk on the phone.
Today, I did not tie fringe.  That was for the apprentice.
Ha!  I love saying that.
I started weaving tote bags, just like I said I would.
Big, beach bag sized totes.
I don't have any photos for you yet.
But you don't need them, cause I have a CELLAR TOUR for you.
Yup.  When I was down there checking on the frozen water pipe, I took my camera.

The cellar at the studio is very large, and dark, and dirty.  It is also very interesting.
So come on down.
This is the old coal stove.  Not sure how long ago it was used, but it has been defunct for a very long time.
I hope to have it dismantled and removed. 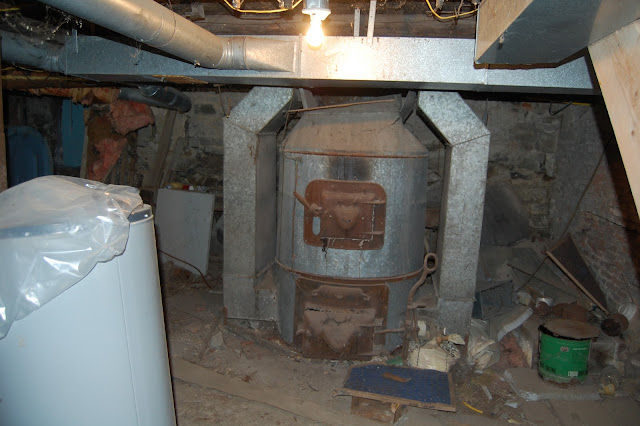 This is the old brick bake oven.  Right now the blue insulator board is stopping the draft, but you can tell that this poor old oven has seen better days.  I am hoping one day to find a 'brick artist', who will restore it to its former state. 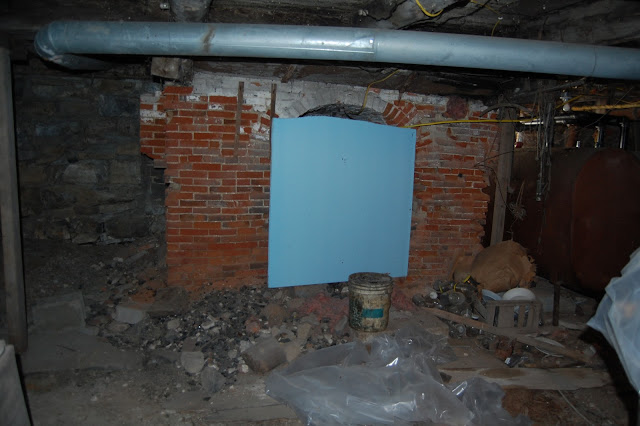 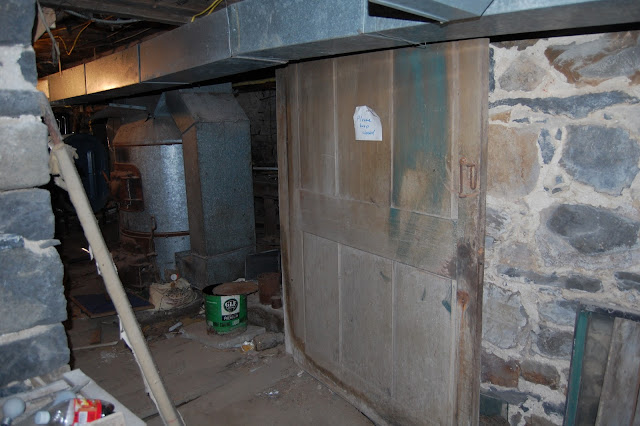 Think someone left this horseshoe for good luck? 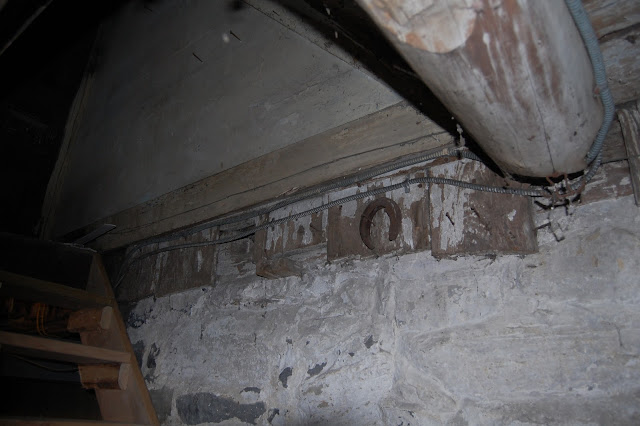 I had these stairs redone, because I was worried that someone would go through them, and get hurt.
You can see the old stair HERE
I have a pile of them waiting for me to clean them up. 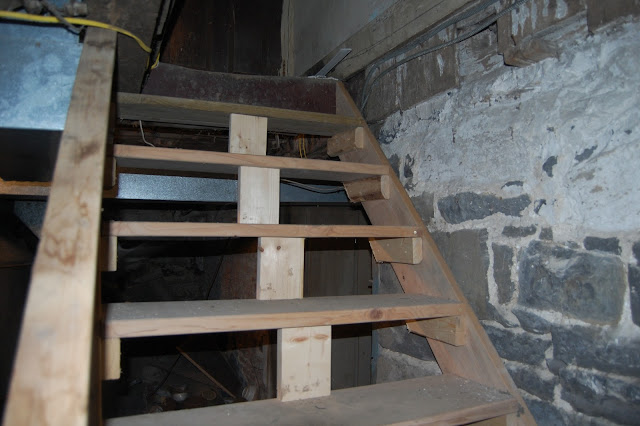 The walls are stone, the beams are huge. And there is a lot of clutter. 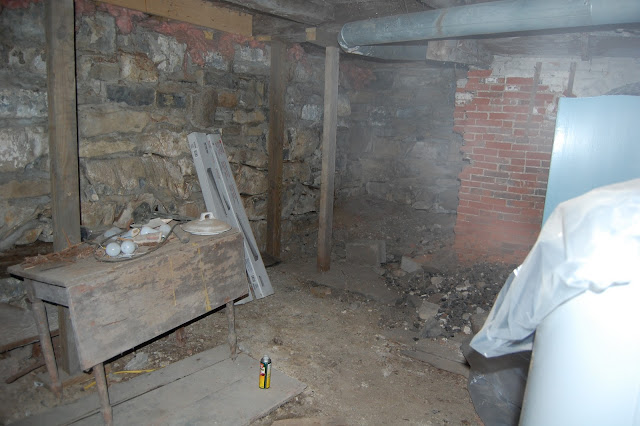 This furnace actually works.  I don't use it......hardly ever.  It drinks oil like my grandson drinks chocolate milk through a straw.  I was paying $500 a month until I bought my pellet stove.  It also sounds like a Volkswagen when it starts up. 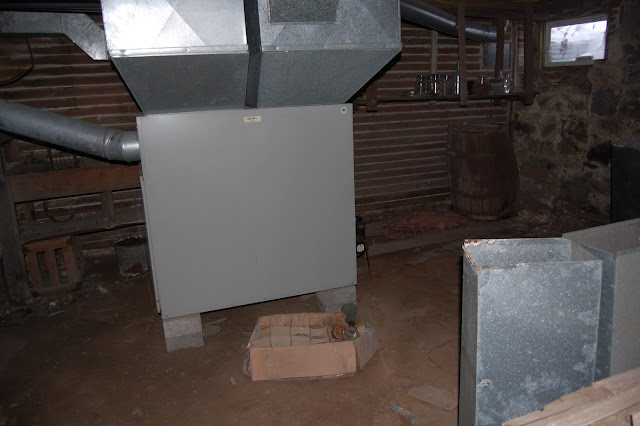 There are a few cool old things down there....this old door, and this whet stone. 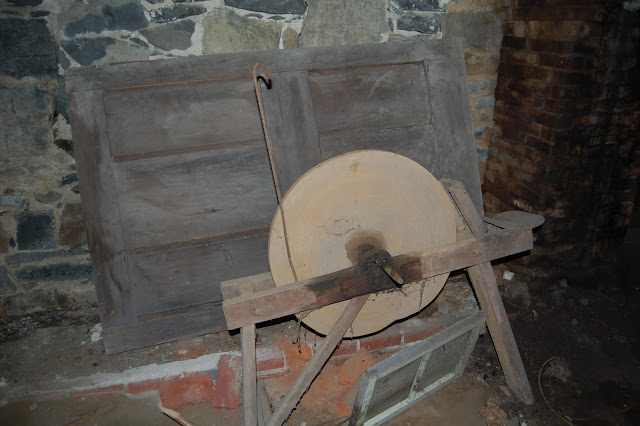 This old barrel has seen better days.  I think it I tried to move it, I would have a pile of boards. 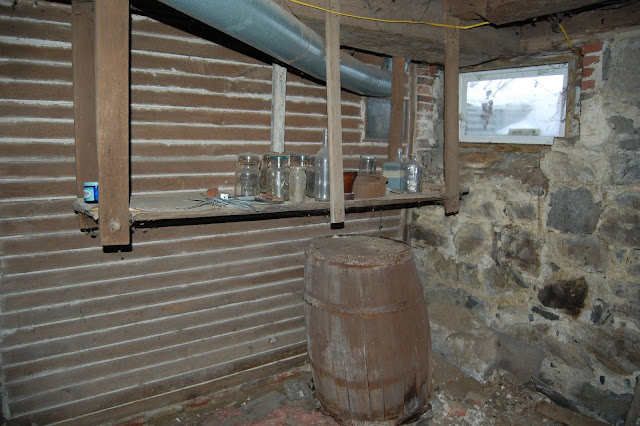 I put the cellar windows in.  They were all boarded up from the inside, and there was dirt pushed against the outside.   Look just to the left of the outside window, and right under the vent pipe, you can see another window, only this one is to the room behind that wall.
The rumor mill has it that this house was used in the Underground Railroad.  This room looks like a likely place
Then again it could have been the place where they stored vegetables. 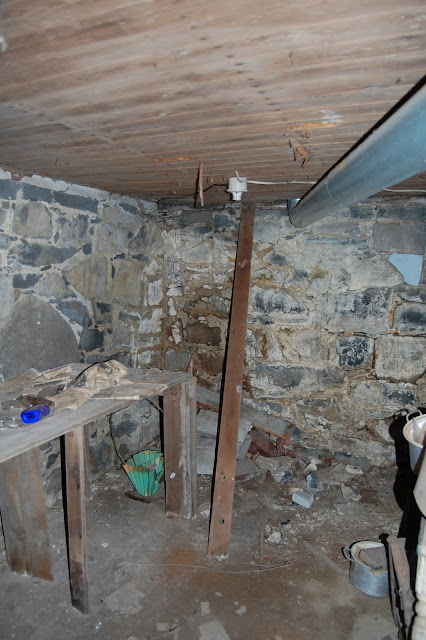 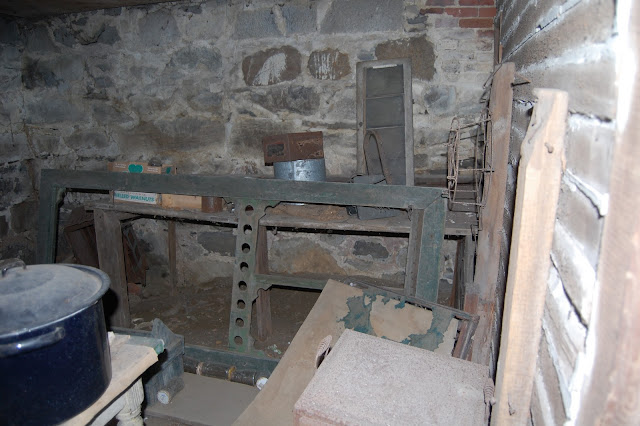 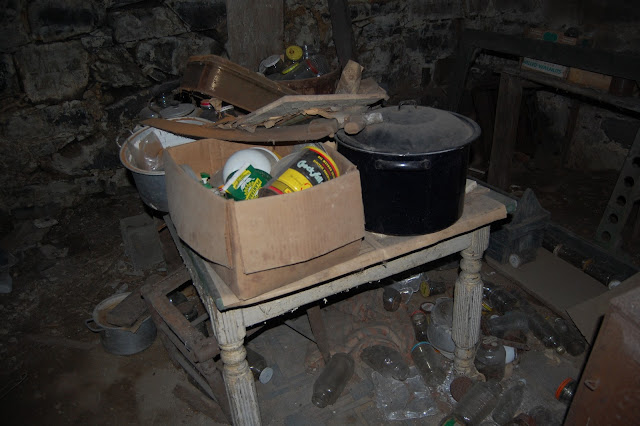 Ay yi yi.
This is one of my goals for this year.  I want to clean this cellar, drag everything out into the yard.  Put some lights up, insulate the ceiling, so that the floors in the house are warmer.
Maybe get the bake oven back in shape.
Now, does THAT sound like a plan?
OUCH. 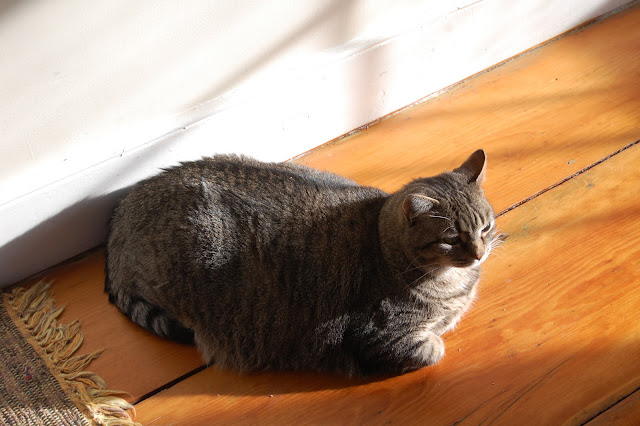 I just love reading your blog Hilary. The photos are always gorgeous and the words are fun as well. One day I will cut up all the old blue jeans around my house and make a rug too!
Alice

FEDEX did not pick up chilly stuff in the snow, sorry for another day or two delay. *sigh*

I had a horseshoe that was put up like yours and when someone was visiting me they told me the same thing.

Apparently, the horseshoe is only lucky when it is hung like a cup - holds the luck in. If you leave it like it is, the luck just keeps falling out.

No sense wasting a bit of luck!

Fascinating place. I can't help but think of the amazing bread that could come out of that brick oven! You do have your work cut out for you, however.

Yes! I think that is a wonderful goal for the year! I wish I had an oven like that. That whet stone has seen some use, all that really old stuff is really cool, but I bet it is all grimy from the furnace!

I love it -- it reminds me of basement in the early-19th century farmhouse in which I grew up...if I close my eyes I can still smell the mixture of dirt and stone and old! :)

I love the thought of re-doing the bake oven; it's beautiful.

Thinking of the woman who had to trundle down those stairs to bake bread, probably weekly a huge batch for her family. Up and down, and then timing it just right to know when to go down and put in a new batch.

A womans work was NEVER done!

(and now we have bread machines, toss the stuff in, hit a button and three hours later a done loaf!)

What a great old house! I wish I could live in an old one. Love that bake oven!

Thnaks for the tour. It's so much fun see other peoples stuff when you know you aren't the one having to deal with it.

As always, you have a lot of projects on your list of to-do's this year. The basement looks like a huge one but I know you will get it done because that's just who you are. It really does look cold down there in the dungeon.

There is a whole lot of living evidenced in those rooms. Do you ever feel like you're living with company?