I am careful never to talk about politics, or religion on my blog.
Not that I don't have opinions, oh dear, I do.
But I don't ever see much point in that kind of dialog, you aren't going to change my mind
about what I prefer in those venues, and I am not going to, nor do I want to, change yours.
But I gotta mention religion here.  There is no way I can post and avoid it.
Since it is very much on my mind.
I have probably mentioned before that my mother was an 'Army girl', back in England.  Yup, she and her whole family were deeply involved in the Salvation Army.  They were dirt poor, and the Salvation Army was their community, their entertainment, and their hope.
And I think I told you that she dragged me to every church in town when I was young, looking for an experience that would be similar.  Of course, there wasn't one.
But now since she lives with me, there is a Salvation Army in town.  And she wants to go every Sunday.
My daughters and I have taken turns taking her, although my oldest has done the most of it.
Today, it was my turn.
So, let me preface.  I do believe in God.  He has  gotten me through some pretty tough times.  My faith in a power greater than myself is central to who I am.
But organized religion fails to inspire me.  I am a Deist at heart.  Have been since I was 13.
Today,  90 minutes of  scripture, sermons, singing, was almost unbearable.   I tried to be calm, I tried to get into it, but I kept thinking longingly of this bridge I could jump off.
I know, I know.
I am doing it for her.  And to her, it isn't even about the religion.  This morning, a gentleman who also grew up in England, was talking about a usual day at the Army when he was a kid.  My mother was getting teary.
This isn't about  church.  This is about her childhood, her family, her memories.  This is about who she was, and who she is.
I take her because at this point in her life, for her to make that connection is priceless.
Who am I to keep that from her?
So I write a check to put in the offering plate, a check that makes me feel a little better about not really wanting to be there.
Does any of this make any sense?   Sometimes I think I blather on, and no one even gets it.
Then sometimes, I think that it's OK anyway, cause I just need to say it.

I told you about my hats......here are a few, and mittens.  I love knitting hats.   I knitted one sitting next to my mother this morning.  I had to stop when we stood up to sing, but otherwise I was knitting fervently, since I didn't feel fervent about anything else.  My husband suggested that it might be blasphemous, but I said, NO WAY.
Put your Hands to work, your Hearts to God.    OR
Idle hands do the devils work. 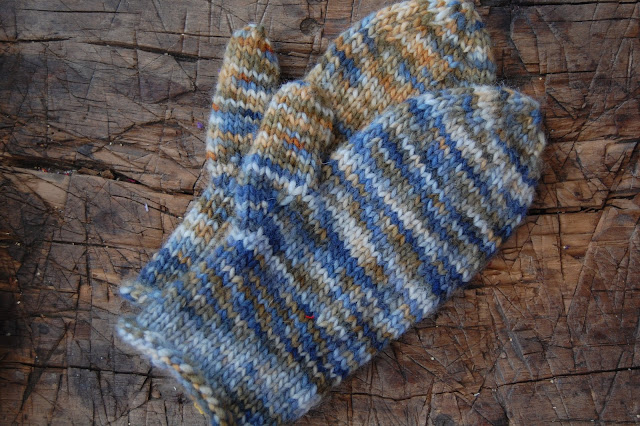 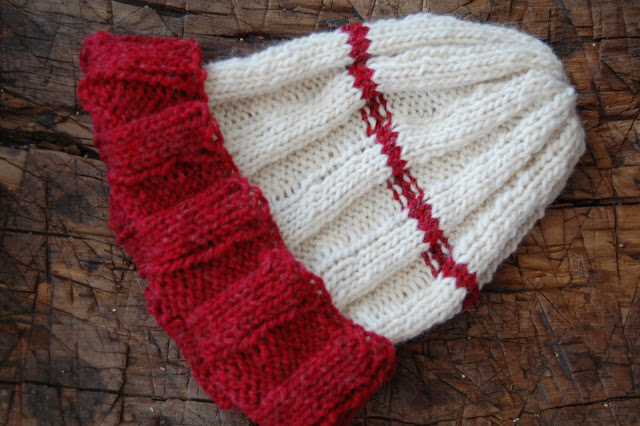 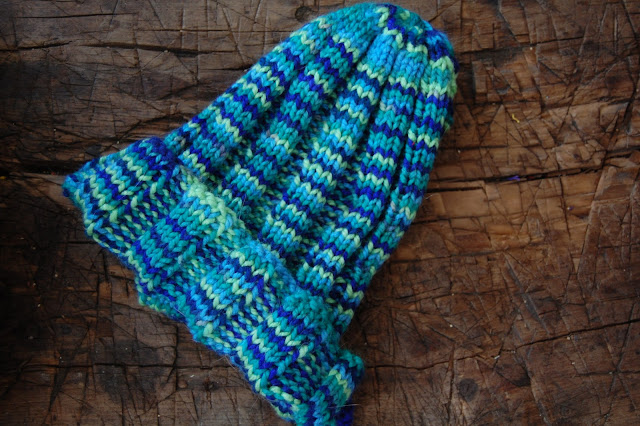 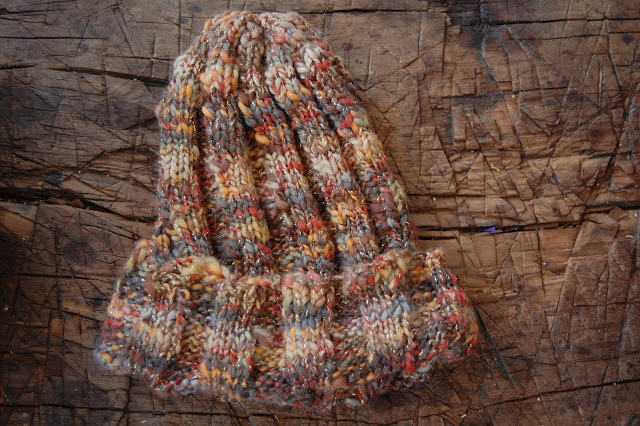 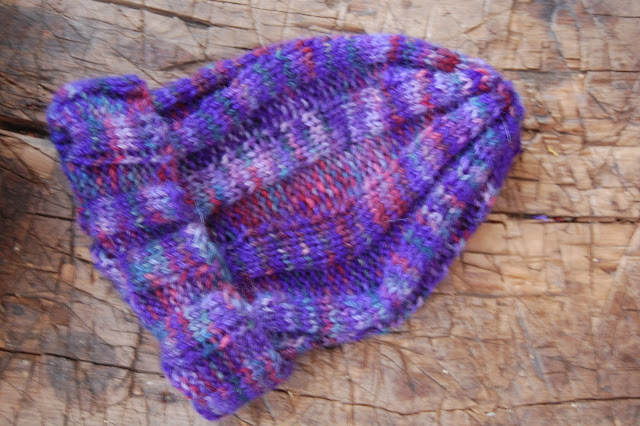 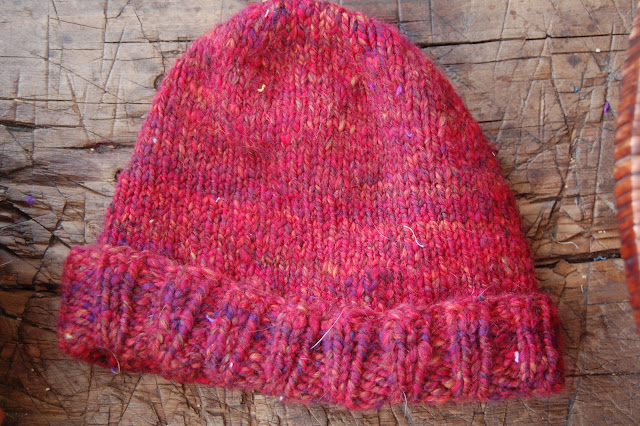 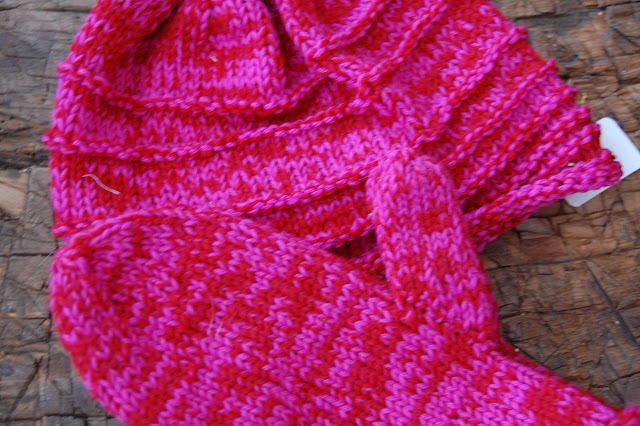 So there you have it.  My confession for the day.
I knitted in church.
And I'm glad.  I'd do it again, in fact, I am almost certain to do it again.
It beats taking the bridge.

Your hats & mittens are as colorful as your rugs! You're a good daughter to do that with her. I just spent my Sunday with my mom, and I think I have permanent teeth marks in my tongue, but it made her happy. Knit on!

Thank you for honoring your mom in this way, even though it's hard.

I have crocheted in church. I sat in back and was discreet. I even stopped during prayer and the reading of the word, so as not to offend the faithful. A friend asked me about it. I told him I fall asleep when I sit still for long periods of time. Would he rather have me crocheting or sleeping? That seemed to shut him up. =)

Hilary you are good to take your mom to "her church". I am a former pastors wife (he was a pastor, now is a business man and still very much alive!) and I used to knit in church also. I stopped during prayers and scripture reading out of respect for Jesus, but knitted to keep myself listening. I can focus on auditory experiences when my hands are busy. Keep on doing what you do and keep loving your mom!

Hilary you and I agree on many things including organized religion. I believe that one's relationship with whatever God one believes in is personal and He loves you whether you are in church or not.

Enjoy your Mom and whatever she wants for as long as you can. I used to drive 100 miles one way to pick mine up and take her to movies and baseball games and whereever else she wanted. I'm glad I did because I miss her now.

I love the fact that you take your mother to her church of choice.

I love the fact that you knit in church.

I love the fact that you knit.

Great post. Thanks for sharing. Being honest. And believing in what you believe in!

I dont do church...it's been hazardous to my relationship with God. Im woozy over the mittens and the 3 hat down.!

~from my front porch in the mountains~ said...

You do such beautiful work, Hilary! With your craft and your heart!

I live by this-
~Relgion is Man-Made.
Spirituality comes from the Heart~

You are a good daughter.
xo, misha

You are a good daughter. I never took my mom for granted and relished every chance to do something with her or for her. I am glad I did, because now she is not here and I have no regrets.
Love your hats and mittens!
I agree with your religious beliefs. I am one to dance to my own drummer. My God understands!

It is nice that you all take turns going to church with your mom, but why do you have to stay? Walk her in, get her settled then go back and get her 90 minutes later.

I think God was smiling on you, Hilary. I think he smiles THROUGH you - Just sayin.

Put your Hands to work, your Hearts to God - I love that phrase, and use it a lot. I always knit in church, when I used to go - if my hands aren't engaged, my brain isn't either.

I knit in class in college, too. Shhh, don't tell.

If the pastor's wife (above) does it, then it must be ok, right?!
Actually, it's all good.

I bet God loves the hats you knit while loving your mom in this way. :-) I totally get this post. I came here through blog-hopping after seeing a rug you made with recycled jeans. I love that rug!

A beautiful post full of honesty... and love for your Mom...thank you for sharing. I tend to believe in the same manner and I have to have my hands going whether knitting or sketching or I get fidgety or worse, fall asleep...nothing worse than feeling your head drop in a room full of people...your hat and mittens are wonderful as are your rugs!

I see no conflict of interest in knitting in church - good for you. And good for you and your daughters for giving your mother this gift.

great story! we all need to be reminded of what you are saying here.....so true. thanks

Wonderful hats and mittens. I will try making mittens, love that idea.

I tiptoe on little cat feet onto your site to see if you have found the kitty. Saddens me that she is missing.
Gayle

I knit everywhere... and keep something in the car in case I have to wait for a train!

I go with my mom to her church when we visit and she really appreciates. One time my little brother wandered in and sat next to mom on the other side. The tears began to fall on her face as she saw him come in, raggy jeans, dirty shirt and workboots. Later I asked why she cried. She said: "I was relieved the church didnt fall down around us from the shock of him coming to join us after 30 since he came along to church with me!" LOL

I have always thought if people would take all of their "church time" and really DO something good for someone the world would be a better place by far. Maybe you could knit something for someone who really needs something warm or just something pretty to brighten up their day...solve two things at once...I do give you lots of credit for taking your mom...she enjoys it..

Thanks for an honest post about a challenging topic. Organized religion seems to fall short quite often-not meeting the needs of people. Taking your Mom, even though you didn't want to be there, was a huge kindness on your part.

I love your mittens!!

I like the peacefulness in church sometimes--like it is a sanctuary and withdrawing for a little while from the frenzied world. Actually, knitting is so peaceful too--I think it fits perfectly with church.