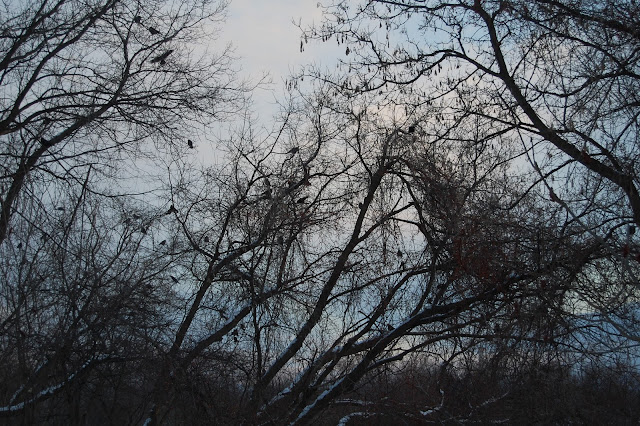 On the way home tonight, there were about 100 big black crows on this tree.  I debated for about a minute, and turned around to get the picture.  But of course, when I got out of the car, they 'flew the coop' so to speak.  I am assuming they are huddling together for the coming storm.  A Nor'easter they say.
Hah, what do they know?

Spent the day with one of my daughters, took a day OFF.  I know, this is getting to be a habit, don't ya' think??
Thanks to L, who is holding down the fort, keeping the fires at the studio burning,  I can actually go someplace, and not worry.  Wow, that is priceless.
So I took the Hip to Be Square Looper Loom on a little road trip, to see if I could interest a large retailer in carrying it.  I am crossing my fingers.
And at the same time, we went to a couple of GREAT health food stores.  Since both of us are not meat eaters, we like to investigate different things to eat.
I came home with a bunch of good stuff.
Some Ezekial bread.  Some tahini.  Some unsweetened coconut milk.  Some quinoa.  Natural peanut butter.  Sea salt.  Vegetables.  Trail mix.    And a bunch of other stuff that  raises eyebrows when I take it out of the bag.
I am getting used to the Mac, and in fact used my daughter's computer for a few minutes last night, and found it somewhat annoying.  I might be a Mac girl after all.
Now, to update an old post.
Yes, my hair is coming in natural, and natural appears to have a LOT of gray in it.  But I'm thinking clearer, so maybe all those chemicals weren't doing me any good.
And just a reminder, if you ask a question in the comments, but your comment comes up 'noreply', then I can't answer you.
Tomorrow is more threading and a little crawling under the loom.  Ah, the excitement.
I can hardly contain myself.
I am really excited though, because The Good Wife is on tonight, with a brand new episode.  For some reason, I am hooked on it.
After Everybody Loves Raymond, it is my favorite show.

Oh yes! I'm just sure it was all of the chemicals.. ha ha ha ha

Cold here tonite and the roads are now a bit icy with snow falling on top of it. Should be a WONDERFUL trip to the airport to pick up Hubby... NOT!

Yes, those chemicals are doing you no good. Our beloved grand aunt who died of lung cancer just before Christmas, who never smoked, was a life-long beautician. They're pointing fingers at the chemicals.

I love that show too!!..was hearbroken when it ended. We've got two feet of snow this morning, I bet you've got it too. Stay warm.