This has been a busy week. First of all, I had a last minute weaving weekend, except that we did it midweek.
And as I posted previously, the first night I had bales of selvedges arriving at midnight.
Then the tour of 26 people.
But it all worked out.
My husband said to me.......I can't believe you are so calm.
Why not?
Not much to be gained worrying about it.
I usually just try to take it one step at a time. I guess after 20 years working at a maximum security prison makes a lot of other stuff just fall into place.
How important is it, I ask myself.
Sometimes the answer is obvious, and sometimes not. 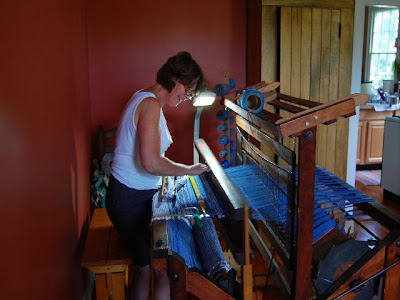 This is Marie.....she has already wound a warp, and put it on the loom, not this loom, but a smaller one.
And now she is weaving a rag rug. 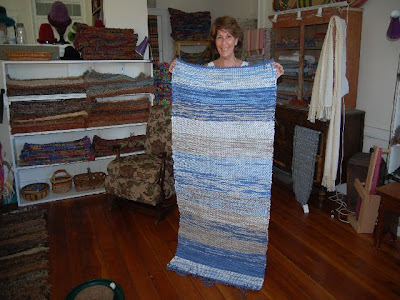 I am always amazed at what really nice and interesting people come to weave at Crazy as a Loom.
We had a great time, other than the unbearable heat. We did have to take a break to swim in my pool, and soak in the hot tub, and swim in the pool....you get the picture.

And she did great. Look at her rug, isn't it beautiful? I think she surprised herself.
She is definitely on her way to a life of weaving. I can tell. 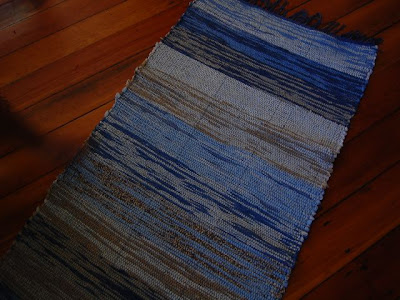 On the way home today, I was thinking about bamboo and wood chucks. Now those two subjects may seem worlds apart. But they really have a lot in common.
When I bought the house that is now my studio, it came with both.
There was months of cutting bamboo. And it kept reappearing.
I researched endlessly, trying to find a way to get rid of it for good. The lady that owns the adjoining property on one side has bamboo. She likes it. So no matter how hard I tried to eradicate it, it was always there lurking on the property line.
I heard somewhere, that you can't kill the bamboo. You can only find the person that planted it, and kill them.
Hmm.
Then there are the woodchucks. Holes in the yard. A giant hole in the barn. Holes under the porches. We tried all kinds of things, but they just laughed. I swear it is true.
I finally just recently had 6 " of dirt taken out of the barn, had wire put down, put the dirt back down on top of it, and then had gravel put on top of that. So I have successfully kept them out of the barn.
But they are still there. They run out from under the porch, and they look back over their fat little shoulders, and I swear, they are grinning.
So today, while weaving, I caught the glimpse of bamboo creeping up the side of the window.
And I wondered.
Maybe, I need to accept the things I cannot change.
Just maybe, woodchucks and bamboo are a lesson in the making.
Who knew?
Posted by Hilary at 8:30 PM

I think the saying about bamboo is hilarious ~ that you must find the person who planted it and kill THEM!!

Yes, her rug is beautiful. What a wonderful weekend they must have had at your place.

Try salt or vinegar on the roots that are creeping in...or let them grown and make wonderful crafty things out of the bamboo.

I have "hooked" string rugs with a homemade crochet hook but I have never weaved or do you say woven?

The rug is beautiful.

What don't you like about the bamboo?! I have hundreds of feet of hedgeline filled with the 30' foot tall beauties! The woodchucks you will have to endure unless you get a dog....

Can't help you with either the woodchucks or the bamboo but I sure enjoyed reading about them.

LOL, I'll trade you your woodchucks for our skunk?

Thank you for your visit to my blog. You can translate my blog by clicking on the botton on the left top side that say "Välj språk" and then select English. Its not a good translation but you will propably understand the most of it. I do weave some rugs but with cloth shreds! If you like rugs you should look at "Birgittas" blog, "Utsikt från vävstugan" you can find your way to her through my blog. She has been to a show with only rugs, just like them I and Birgitta weave. I hope you will find your way back to my blog and be able to read it, if not please tell me.
/ India

You're right - Marie did good and her face tells the story.

Good luck with the bamboo and woodchucks. I think the rest of the story is still to come. You might need some more practice on the "accept what I cannot change" part~

I believe that is a lifelong project, Sharon. At least for me. Probably for everyone.