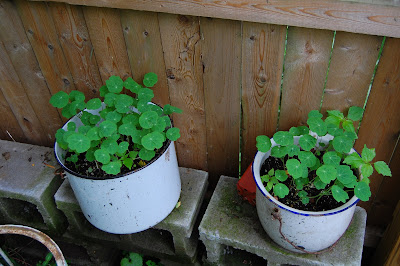 I am not a very patient gardener......I like planting potted perennials that I can count on, and I have always hated waiting for seeds. I never trust that they will appear; except for a few .....and nasturtiums are one of the chosen ones. They always spring up from the dirt with abandon, and they thrive with no attention whatever. 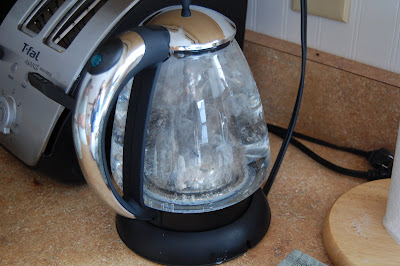 Here is another great choice I made not long ago. My mother and I, being English, are dedicated tea drinkers. We make it in a pot, and there are rules to be followed. The water has to come to a full rolling boil......and you always pour the water 'boiling' onto the tea in the pot. You never turn the water off, and let it sit for even 2 seconds. Because it was difficult to hear the tea kettle whistling from our living room, and also from my mother's living room in the back of the house, the kettle was always in danger of going dry over the gas flame. And with my mother's hearing being not good at all, I was also worried about her forgetting the kettle on the stove entirely. So I bought this....it is called a "Capresso", and we have come to love it. The base is plugged in, so the kettle lifts right off it. It boils water in about 3 minutes, or less, and you can SEE it boil. And the best part is, it shuts itself off. If you forget it, you just turn it back on, and it will boil again in 30 seconds. Love it, love it, love it. My mother was a little skeptical at first, but she is definitely sold now.

As I mentioned earlier, Tammy starts her new job tomorrow. She has mixed feelings about it, and so do I.
She and her boyfriend have also been on the hunt for a new apartment, so they can take Jinx the kitten home with them. They looked at one yesterday that sounded promising, but her response when I asked her about it was "gross". So I guess not.
She jokingly said that I should let them live at the studio. The upstairs would be plenty big enough, and they could use the kitchen downstairs. We talked about it a bit, and I realized that she was serious. So I said I would think about it.
And I did.
First there is the money...........which if I gave it to DH for safe keeping would amount to a nice little nest egg of savings that wouldn't hurt a bit.
Next, Tammy is a clean freak, so the house would be spotless, with no effort on my part.
Then, her boyfriend would do all the yard work........ALL THE YARD WORK!!!!OMG.
Also, there would be someone there, the house wouldn't be sitting there vacant when I am not there.
It all sounds good, right???
So I tried to imagine it.......their furniture upstairs in the bedrooms. I wouldn't be able to do weaving weekends. I wouldn't be able to stay over with the grandkids. And while they both will be at work Monday through Friday during the day, the weekends, and holidays would be a problem. I would feel like I was intruding, in my own space.
They would have their friends there, and somehow it would change everything.
So after much thought, and talking it over with my husband, who listened to both sides of it, I decided that there really isn't enough money, or reasons, to give up my serenity.
Choices.
Creating my life as I go. 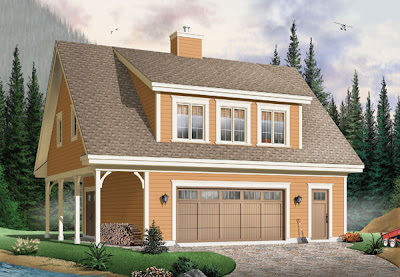 So Tammy said that maybe I could build a garage with an apartment over it, and they would live there.....
Yes, she does think that I am independently wealthy.
She emailed this floor plan to me........and I have to admit, I LIKE it. 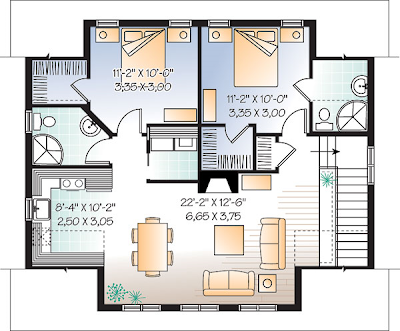 I love the smell of cut lumber............I have loved it ever since I was a kid, which is pretty understandable, since my father was always building something.
But maybe this is a project for another year.......ya think?
Yeah, that is probably the right choice for now.
Posted by Hilary at 3:25 PM

Having grown children move in can be tricky... sometimes it sounds as good on paper as the floor plans of that over the garage apartment. Then reality sets in and you lose some of the pleasures of the twilight years in life. Grins

Sometimes no is the most loving answer for all concerned.

Don't say yet, you will regret it, not today, not tomorrow but some day...just got mine moved out!!!

I shall have to proof read...yet should be yes. I was in such a dither about your child moving in, I was trying to save you and could not spell.

She must really adore you to want to live under your roof. That mutual love will probably survive a lot longer/better if you say "no." Sounds like you made a wise choice.

It will add value to your property. My BIL had a very similar arrangement for his MIL and it went swimmingly well. In the house, um no. Next to the house, could be a good thing. You know Tammy best.