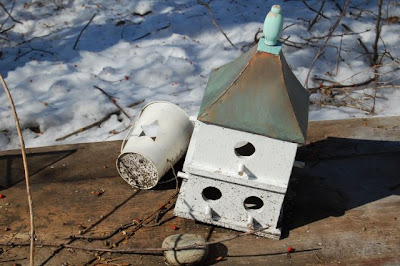 It's still winter.
Go figure.
I tromped around outside for awhile, hoping that I could make out the labyrinth beneath the snow, but the snow was too deep, still.
I fed the birds, fed the cats, and cut some fabric. I didn't weave at all today, in an effort to stay true to my resolve to take some time off, even if only half a day.
It was sunny, so I took a drive through the country, just soaking up the day.
I treated myself to a trip to the book store, 20 minutes away, but worth the drive. And I had a cinnamon decaf latte. Not my usual cuppa tea......literally. But it was good.
I bought a book on digital photography, and a book on Photoshop Elements, which I received for my birthday.
And I made my husband a cake from scratch. Because he deserves it.
Ten years ago, I was single. I had been divorced for 4 years at that time, and lived with my 18 year old daughter in our country home. I wasn't dating, and wasn't interested in it really, figuring I had used up all my lifetimes when it came to relationships. Oh, let's be honest here, I failed miserably when it came to men.
My daughter, though, had different ideas. She was getting ready to graduate from high school, and she was going to college in September. She decided that I needed to meet someone, just to get me out of the house when I wasn't working, and I worked too much.
So I went on Snap.com, looking for a likely prospect to spend time with; you know, dinner, maybe a movie. Nothing serious. Absolutely no long term commitment. I was done with that.
I went to dinner with a couple of very nice men, I went to lunch with a couple, until finally I figured out that meeting for coffee was even better yet. I could look, spend 20 minutes deciding if there was any reason to continue, and then run.
And then I read this one ad. Guy my age. We had a lot of things in common. He was very connected to his children, and his grandchildren. And he was looking for a woman 35-45.
I flipped. I was indignant. What nerve.
So I emailed him, and told him what a loser he was, 52 years old, with requirements like that. And I added, he was missing out on me, even though we seemed a perfect match, because I was too old.
He promptly replied.....he pled ignorance.....his daughter had put the ad up, because she decided HE needed to date, after being alone for about the same amount of time I had been alone. He didn't have those requirements. Honest.
So we emailed back and forth for a couple of weeks, and then due to a complete loss of tact, I said, "Look, we might as well meet and get it over with, cause we likely will hate each other on sight."
So we met for lunch. His idea. Red Lobster. My idea.
He was tall, and not my type. He proceeded to tell me his life story, which included a liver transplant 5 years previously.
OMG. I was speechless. What HAD I gotten myself into. A LIVER TRANSPLANT!!
Unbelievable.
Then suddenly, I had this 'deja vu' moment. I said, "Have I met you before?"
He replied, "No, no, we've never met."
I persisted. Asking him if he was sure. He was.
Then in the course of conversation, he mentioned a small community college. I said, "What? Did you go there???"
"Well, yes," he replied........."but only two semesters."
And his face morphed into a younger face, an 18 year old face, sitting across the table from me, peering down into his cards.
I jumped up, and squeaked, "I KNOW YOU. YOU taught me how to play Pitch in the student lounge."
Silence.
Now there is a 52 year old man staring at me with mouth open, looking like I had slapped him.
Yes, it was true.
Thirty two years before, we had been partners in pitch, as Freshmen in college. I was majoring in English. He majored in Pitch. (He swears he majored in English)
What are the chances?
A week later we had dinner, in two weeks time, it was entire afternoons, then dinner.
Two months later, in a truck filled with my daughter's belongings, on the way to her new dorm, I realized that this man was my best friend.
On 2/2/02, we were married, with our six children, our grandchildren, our mothers, his brother, and my best friend.
He is a prince, this man, and finally I get an passing grade.
I said to my middle daughter one day, that I wished I had met him sooner.
She replied, "You wouldn't have been ready sooner."

Oh Hilary..i loved this post. It sounds like a bit of my story too. I love the new picture at the head of your blog too. Did you take that? It's very nice...I just got a new camera and once i learn how to use the darn thing, i hope to take better pictures.... :)

What a great story. It's amazing how some things are just meant to be.. even if it takes over thirty years to realize it. Beautiful. :)

I love it ! Very creative ! That's actually really cool Thanks.