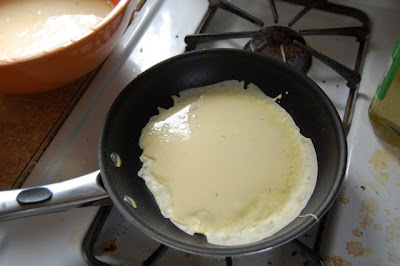 Many years ago, when my oldest daughter was about 11 years old, and we lived in China, Maine, I used to make crepes a lot. I bought a very nice crepe pan, and fancied myself to be quite evolved in the cooking world. That's a joke.
Anyway, I found this recipe for Chicken Broccoli Crepes, and I made them. My oldest daughter fell in love with them, and I made them for her quite often. As years went by, the crepe pan was forgotten, and the recipe as well. We got talking about it not long ago, and she and her sister both remembered the recipe, and how much they liked it as kids. So since today was my oldest daughter's birthday, I searched google til I found a recipe that sounded like it, and went shopping.
It isn't a difficult recipe, so I don't understand why I dirtied every dish in the house, but it did take quite a while.
I faintly remembered there being a learning curve about the crepe, and the temperature of the pan, and success.
The first crepe was awful, and I began to worry that maybe it had been too long. But the second crepe turned out awesome, and I was inspired. The crepes were flying out of the pan in no time.
Then I cooked chicken, and cut it up, cooked broccoli and cut that up. I made a white sauce, and added cheddar cheese to it, and some seasonings, and saved some to put over the top of the crepes before I added the the chicken and broccoli to it. They only go in the oven for 15-20 minutes, and they were a big hit. 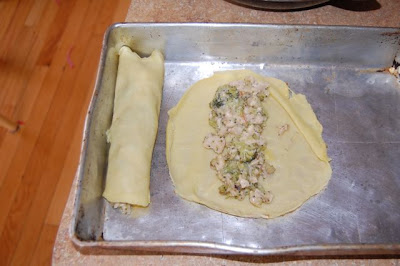 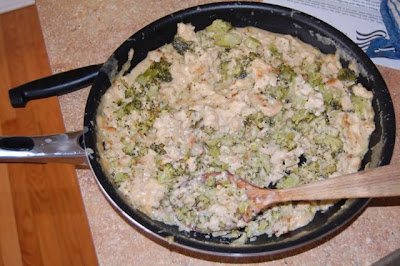 My husband made lasagna for the meat lovers/veggie haters in our family. And of course it was wonderful.
And we had a loaf of locally baked Italian bread, which was devoured.
And of course CAKE.

I had intentions of taking pictures at this birthday get together, but between the good food, screaming kids, laughing, talking and generally spending time with my family, I forgot all about the camera.
Next time. 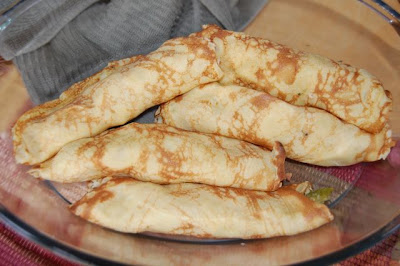 Belated birthday wishes to your daughter.

Looks good! Those kinds of dinners make the nicest memories.

Oh my goodness do those look delicious! I haven't had crepes in years but I'm thinking maybe it's time. Yummm.

Thanks all......they WERE good, and they were a smash hit with my daughters, and it doesn't get any better than that.