Where we want to be. 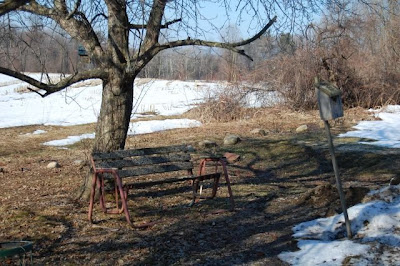 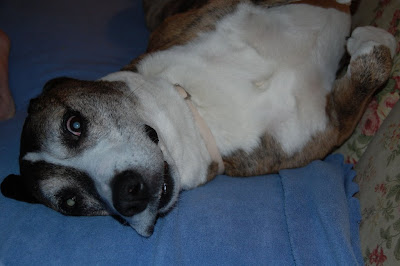 Back to the studio today......after taking a couple of days to be with my daughter and her family. It was beautiful yesterday, but today the sunshine didn't last long, and it was raining by lunch time. A lot of the snow is gone, replaced by mud, which is OK with me, I prefer mud.
I had visitors today.....first my best friend, Sheila, then my cousin, Joan, and then my friend, Alice. Some days I weave away all day and see no one, so it was nice today to have company, and catch up.
I worked on a stair runner all day, and will probably finish it tomorrow. I won't take it off the loom though, instead I will just unwind it from the front beam, and let it rest on the floor under the loom, for about a week. During that time, it will "find" its desired length, and then I will measure it with the tension off, and wind it back on the loom, and either add some, or un-weave some, til it is just right.
I am pretty tired, I think emotionally charged times wear you down..........so I came home and went in the hot tub, and put my pj's on. It seemed like the right thing to do. My pup.....Eddie, who is 12 years old this year, is glued to me from the moment I walk through the front door. He loves me. In this picture, he is lying on the couch, one of his favorite places, gazing adoringly at me. His ears are flat back to his head, which means he is very happy. My husband and I both tell him that he gives pit bulls a bad name......he is such a baby, but he pays no attention.
Eddie was one of two puppies being used as bowling balls by a group of deviant teenagers. A friend of my daughter's happened to be in the bowling alley, and she bravely confronted them, and threatened them with the police. Rather than get arrested, they gave her both dogs, Eddie, a brindle pit bull, and a Rottweiler puppy. She kept the Rottweiler, and my daughter took Eddie with her to California. A year later, when they came back to NY, she couldn't keep him where she was living, so she brought him to my house, where he has been ever since. He loves to swim, and as soon as it is warm enough I will take a video of him leaping into the pool, and swimming in circles. He sleeps on the bed, and he is a big bed hog. He has babies, stuffed animals, all over the house. He loves his tennis ball, but when he was 3 years old, after my other pit, his best friend, died, he tore it apart, and swallowed a big chunk of it, and he ended up with a bowel obstruction. Emergency surgery saved his life, and boiled chicken fed by hand gave him back his strength.
Contrary to all the negative press, Eddie has never bitten one person, he is a total love bunny.
Last October, he had pancreatitis, and was very, very sick. He spent 5 days in the animal hospital. Thankfully, he made a full recovery. He doesn't hear very well anymore, and he has cataracts, and he doesn't see very well either. So we don't move the furniture, and we are very careful about the fat content of what he eats.
He has lots of other names besides Ed. We call him Eddie, Edgar, Baby boy, sweet boy, Edhead, Eddie head, puppy boy, pitbull........the list goes on.
We are pathetic.
I know he is not long for this world....pit bulls live to be about 12, and he has aged a lot this last year.....I am hoping he has another summer to swim. For now, I continue to be grateful for his loyalty and love. When he settles next to me for the night, he takes a deep breath, and sighs. I reach over and pat him. He is right where he wants to be.
Isn't that what makes us all happy?
Posted by Hilary at 6:54 PM

As a person who was raised with "pit bulls", I'm nodding my head and smiling as I read your post. My "Sass" is also 12, and getting very gray around her muzzle. She knows when I sit down at the loom, that it's time for a little nap. Sometimes, when a stick falls off the warp beam, it will startle her....her expression is very funny. Maybe a squirrel got into the house?????
We had to have her half brother put down in November due to liver failure. He was 10 and a very handsome and faithful member of our family. We still miss him.
Thank you for your wonderful post...I look forward to reading them!
LouAnn
Just another weaver!

unconditional love is always a great healer. I'm glad you have him.

I loved reading about Eddie. Every pit bull I have ever met has been a love muffin. I had a lab pit bull cross a few years ago. I ran a licenced family day care at the time and many a infant learned to walk by holding on to her. Those were her kids and I think she would have protected them with her life. We also share our bed with a canine family member. But alas our 15 year old mutt can no longer jump up. Don't worry she has a large poofy bed and an old sweater of mine.
Love every minute you have with him.
Chris

Sweet post. I've know many a sweet pit bull (and far too many not sweet, sadly). The sighing part reminds me of my lab - he would also sigh as part of the night time ritual. When I would be tossing and turning and having trouble getting to sleep, I would remember to put my hand on him, give a deep, long exhale. He would do the same. We would do this 2-3 times, and both fall off to sleep. Better than any sleeping pill I ever took.
Kimmen

LA........I know you must miss him! I dread the day......but I know, too, that I will rescue another pit in Eddie's name.
Char, yes, unconditional love....that's what dogs are, for sure.
Chris....I do treasure the time we have with him, he is such a sweetheart.
Kimmen....you are so right.....they are sweet sleeping partners.
Thanks all for your comments! And for stopping by.