Day trips are good.  Honest.
My BFF and I planned this one, which we both  looked forward to all week.

We stop at all yarn and fiber related shops.  That's a given.
We love back roads.
And we love to investigate.
As we were coming out of a 'sweet' little yarn shop, we saw this down the street.

A place that deals in salvage. 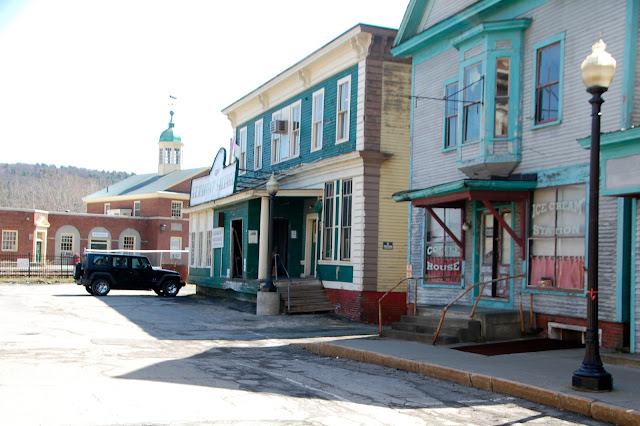 For me, it's like a blast from the past.  I grew up with 'salvage'.  It was just a normal everyday part of my life.  My father scoured the countryside, filled up a big barn like structure that he attached to OUR HOUSE, and sold it for a second income.  He already worked as a painter in the paper mill.
The building grew and grew.  Every year or so, he would make it bigger, and every year, it would seem to almost groan with the piles of goods he packed into it. 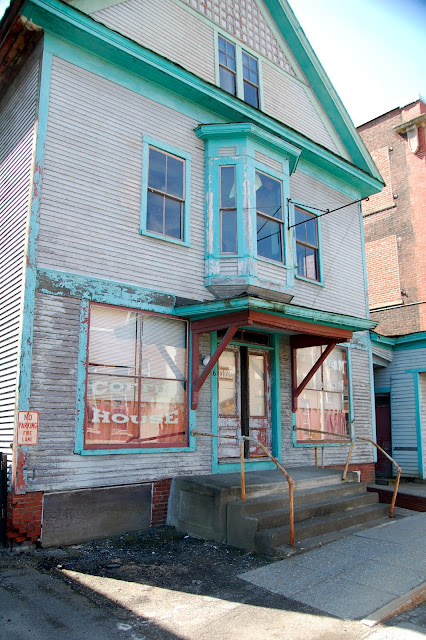 This felt like home to me, except that it was much more organized than my father's stuff. 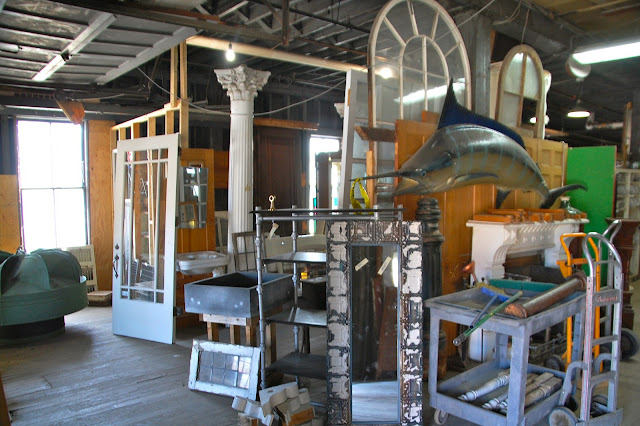 My father never advertised.  People just came.  Word of mouth, he said, was the best advertisement of all.
We never sat down to a meal that wasn't interrupted.
"Somebody's here."    I can still hear the sing song way my father said that.
Like:  can ya' believe it?  some one is here at dinner time........again?

And one of the most intriguing and dear memories I have of my father, is riding in the truck with him, looking for treasures.
Oh, yeah, plastic fish and church pews.....right up my Dad's alley. 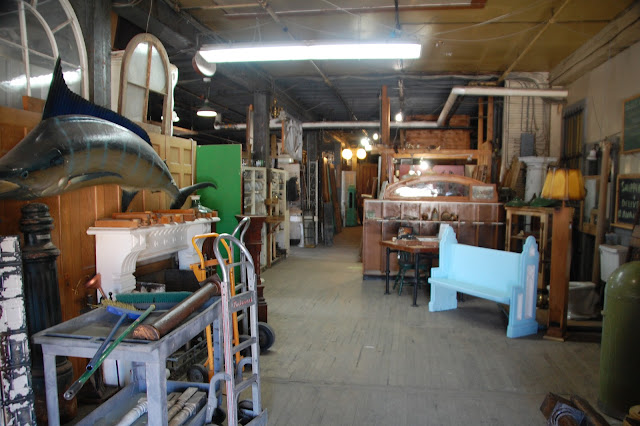 No one appeared while we wandered around.  There was an office, and I guess whoever was in charge figured we would holler if we needed them.  It wasn't like anything in here would have been small enough to be carried out unnoticed. 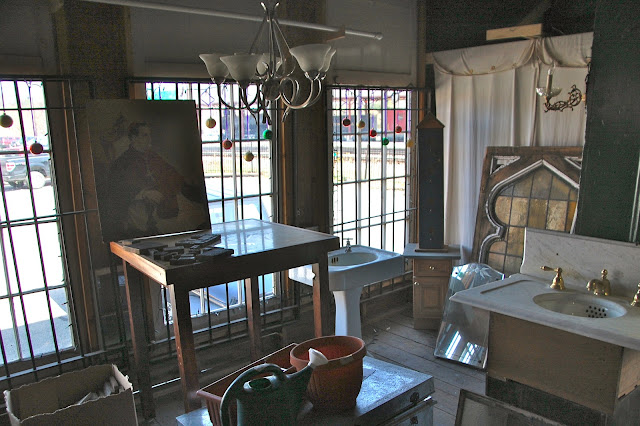 Someone fixing up an old house could be in heaven right here.
There was every possible fixture you could ever want. 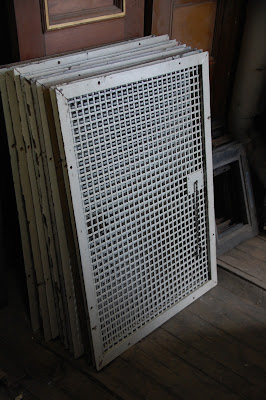 Even though most of the people who remember me growing up are gone, in my head, I am still 'Morty Cooper's daughter'.
And finally, that's ok. 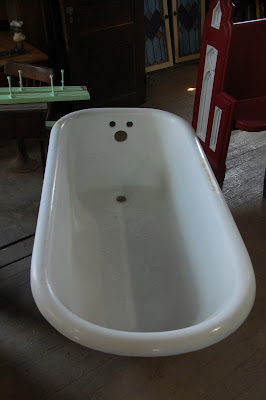 Funny, how weaving is to me, what salvage was to him. 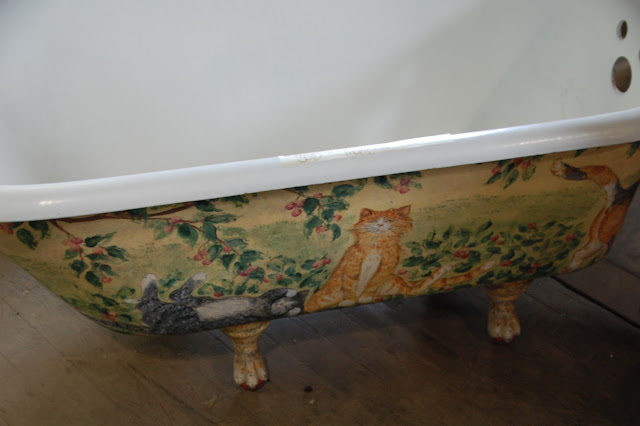 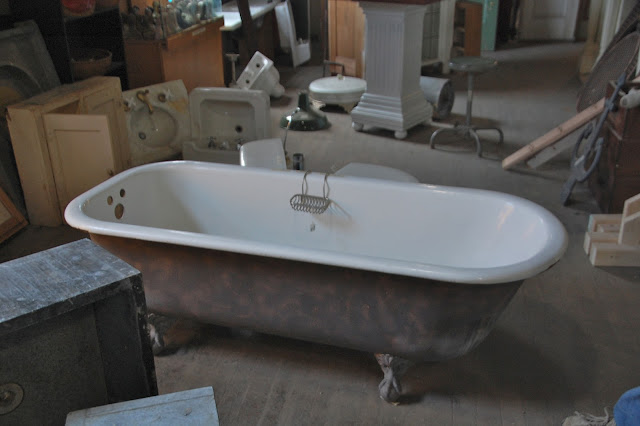 Walk with me.......check out this awesome stash of STUFF. 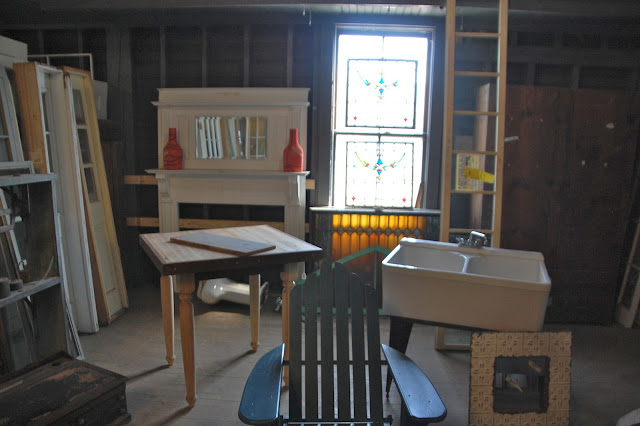 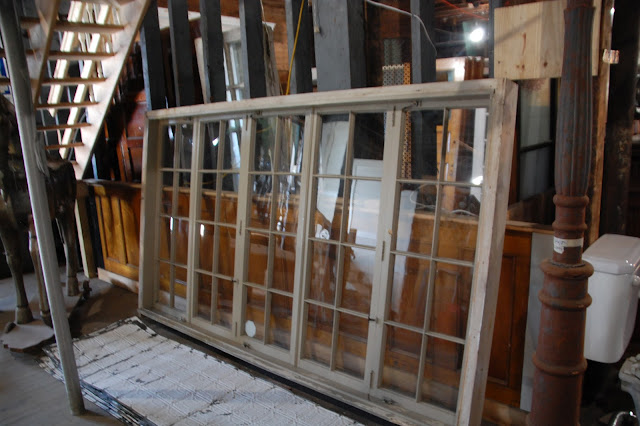 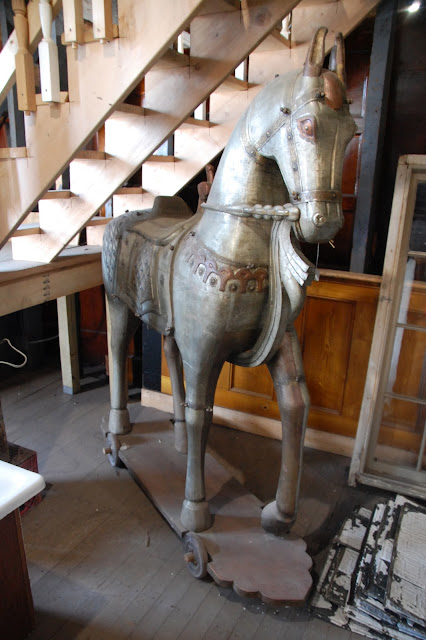 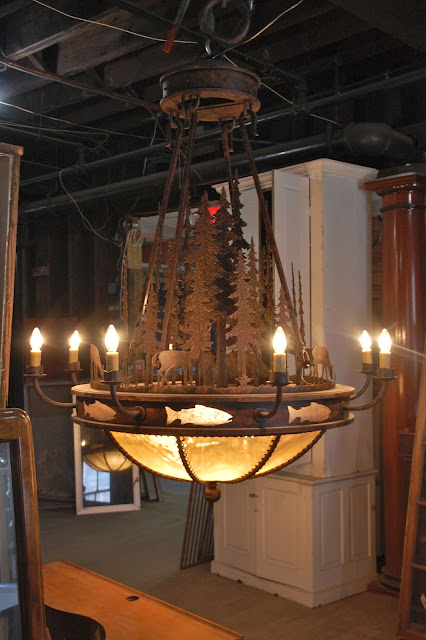 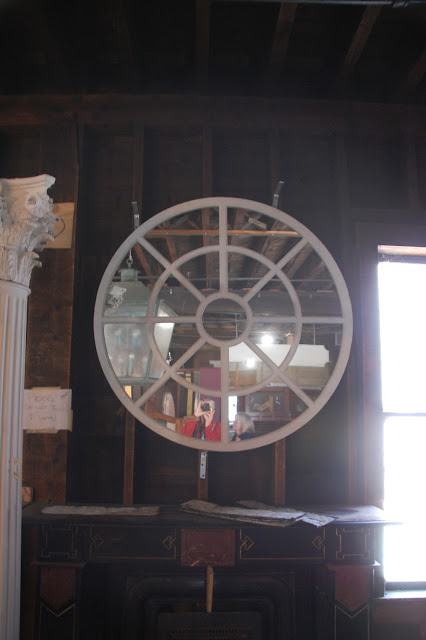 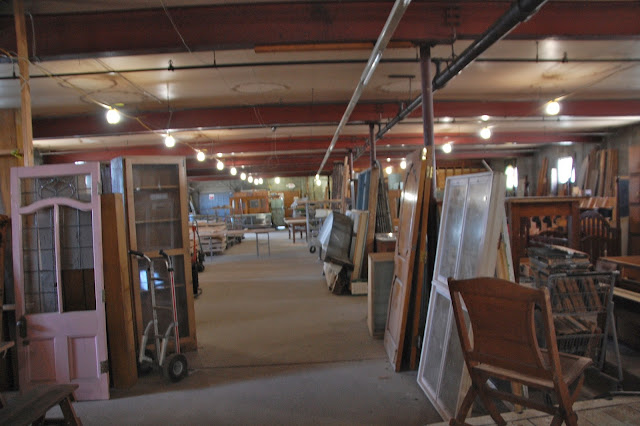 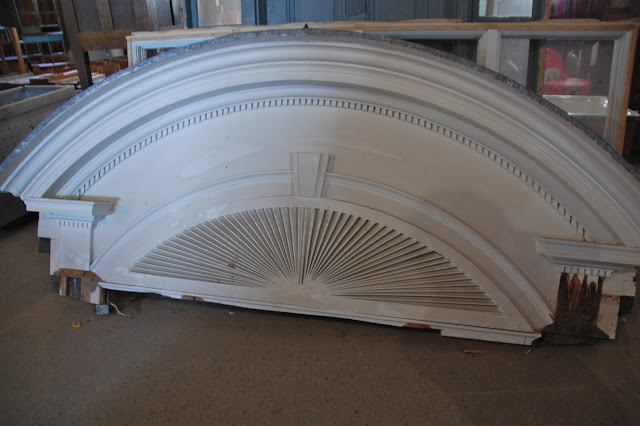 And they even have an UPSTAIRS. 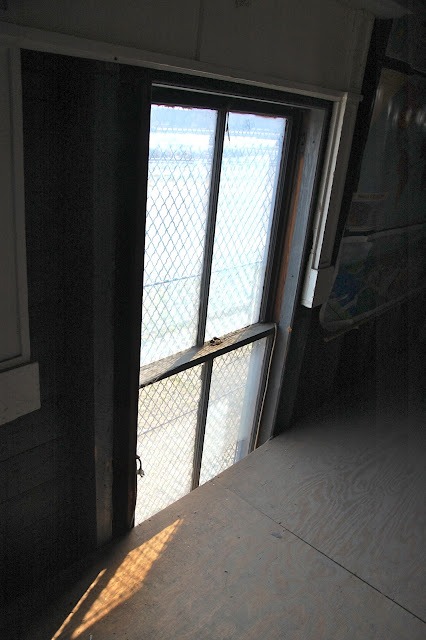 Be still my heart......I love posts and columns. 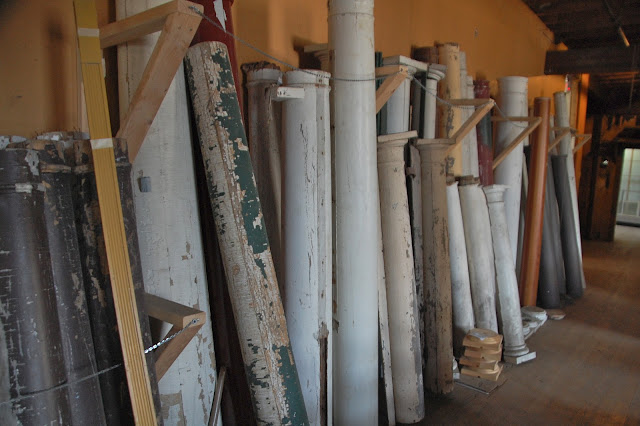 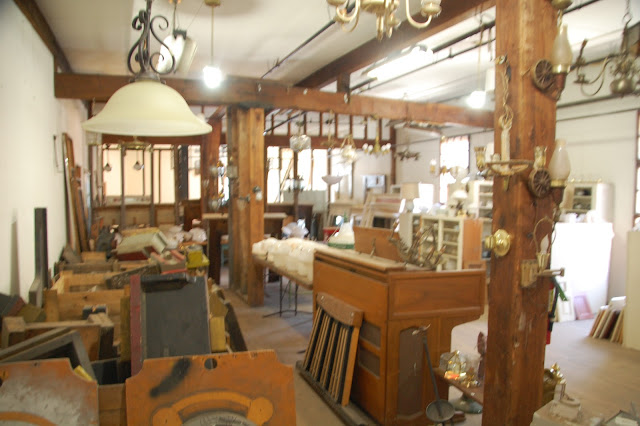 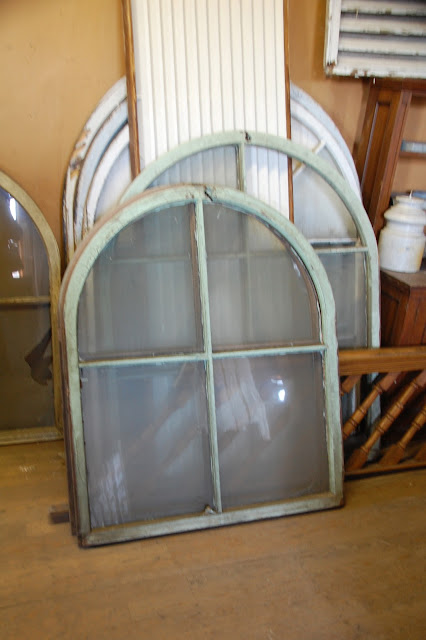 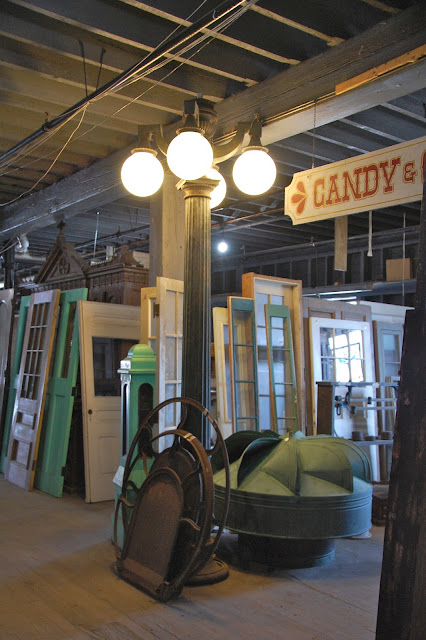 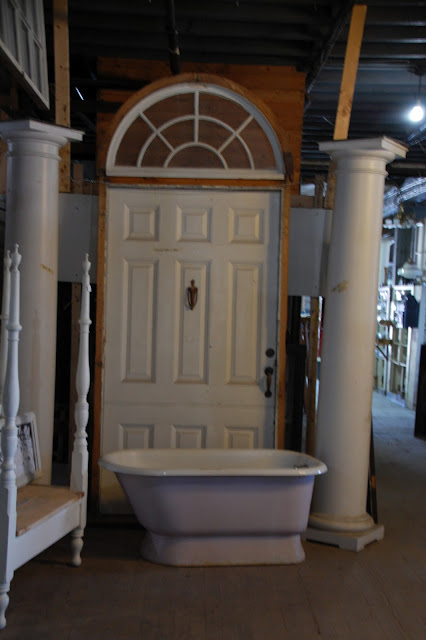 So don't say I never take you anywhere......cause I do.
This is the building from the outside.
It's a brute. 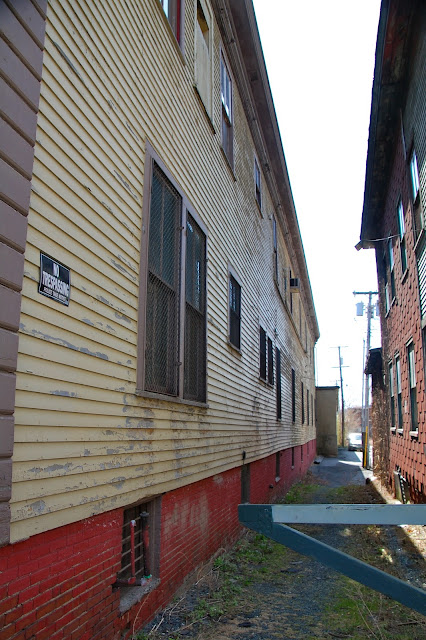 I wanted one of each of everything in there.
Back to weaving tomorrow.

The retired guy would be in heaven. It is fun going through those places. That is really nice to hear your recollection of your dad's 'hobby' and all that went with it. You are lucky to have good memories with your dad. I'd take home that bath-tub just for the painting. CUTE!!!!

So much fun...I love those kind of road trips and those kind of "stopping and shopping" trips. It really does feel like you took us along with you...thanks so much.

Hilary, now that is a trip I can get into. Wish I was walking right along with you. Enjoyed viewing all the marvelous finds - the kitty tub was way cool. The windows, the desks, the lights, the wood, the stuff! Ah, what a great day you had.

good stuff!! Thanks for the tour! You weren't tempted to take the big plastic fish with you? :)

Going through old places like those in New England was a regular part of childhood, lots of good times. Sadly, nothing like that here in the Northwest.

Great place! Love all those old doors in their pretty colors! I could wander around that place forever!

Thank you! This is just what I would have liked to do today. I love salvage shops!

My Dad sometimes brought home odd things. One time he brought home a red and black cat clock. The tail swung back and forth and the eyes moved while counting the time. He decided it would look great on the kitchen wall. My mother never said a word when he hung it up but the next morning the clock was gone. None of us kids ever asked where the clock was and we never saw it again!

Day trips are good for the soul.
Glad you had a fun day.
Louise

What a neat place! I sure would have enjoyed exploring there in person.

Oooooh, lots of good stuff! Looks like a very nice little trip and I thank you for taking me along.

Thank you for taking me along. I'd love to go through that place in person. I'd probably want one each of everything too.

What a fantastic place to explore!! That TUB!!!! it SOOO belongs at your studio!... if not inside, then outside with a garden planted in it!.....

I love the turquoise trim on the building too...

I love these places and I think it's cool that Morty Cooper's daughter grew up finding treasures like this each day.

Frank would love that deer/fish chandelier.

Oh, my! The round "window" and the huge farmhouse sink. I wouldlove to have those. Wonder what shipping is to OK? I do believe that the NE Region has more interesting places such as that than my area has. Of course, y'all have been at it just a hundred years longer than us. Thanks for the tour. Ruth Ann

Please tell what town that is I would love to browse and buy a window or two !

Totally totally cool.
I want you to know that I envy your being able to stop like that and investigate. My husband would NEVER do such a thing, making travel with him so much less than fun.

Be still my heart!!! That shop looks like heaven. I love road trips on back roads. There's a line in a country song that says, "I'd like to put a little gravel in my travel." That's me! Unfortunately, there are no back roads around here. The closest thing to taking back roads is taking surface streets vs. the freeway.

I can get lost in places like that for days. Love digging through the piles even if I'm not actually buying anything. So many cool treasures waiting for the right person to come along.