Raining again.  I never mind the rain, but today I am thinking of the people in so many areas of this state, and the country, who are homeless because of the destruction from so much rain.
I am grateful for my warm, dry house.
I did some work at the studio this morning, there is always something to do.  There is always LOTS to do.
I have no idea how I did it all by myself, before L.   It's a mystery.

Anyway, when the sun was shining, L took these pictures, of the bevy of Jerusalem artichokes out by the driveway. They don't really have anything to do with Jerusalem, or artichokes.  They are a species of sunflowers native to North America.   Apparently, when Samuel de Champlain sent some back to France, it was noted that the tuber which was eaten as a root vegetable by native Americans, tasted similar to an artichoke.
Who knew?
Anyway,  it seems that the human digestive system has a problem with it, as noted  in Wikipedia.

The tubers are sometimes used as a substitute for potatoes:[5] they have a similar consistency, and in their raw form have a similar texture, but a sweeter, nuttier flavor; raw and sliced thinly, they are fit for a salad. The carbohydrates give the tubers a tendency to become soft and mushy if boiled, but they retain their texture better when steamed. The inulin cannot be broken down by the human digestive system[6], which can cause flatulence and, in some cases, gastric pain. Gerard's Herbal, printed in 1621, quotes the English planter John Goodyer on Jerusalem artichokes:

"which way soever they be dressed and eaten, they stir and cause a filthy loathsome stinking wind within the body, thereby causing the belly to be pained and tormented, and are a meat more fit for swine than men."[7]

So L, if you decide to dig one of these up to try it, could you stay away from the studio for a couple of days, until you find out if this is true or not?????? 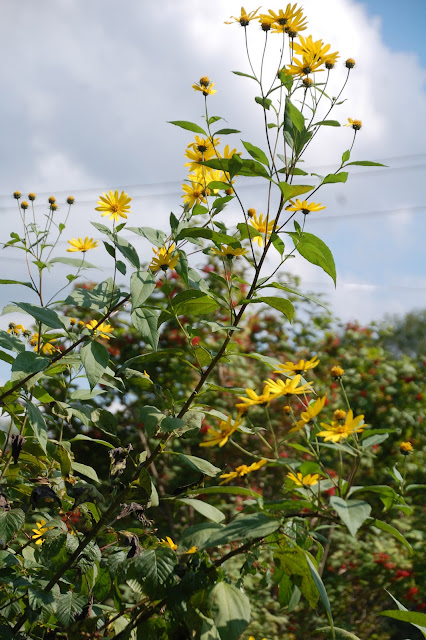 They are pretty, though, aren't they????


I did some weaving on the Cranbrook yesterday, and I had a supervisor.
She seems to be busy sniffing the air. 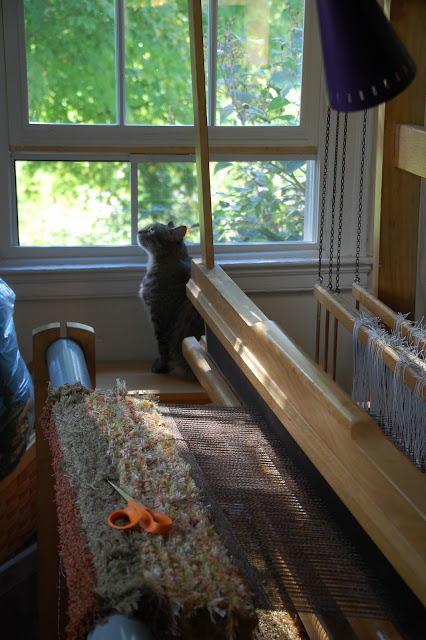 I keep thinking that there are going to be a few 'quiet' weeks, where weaving whatever is the norm.
I keep waiting.  Hoping. 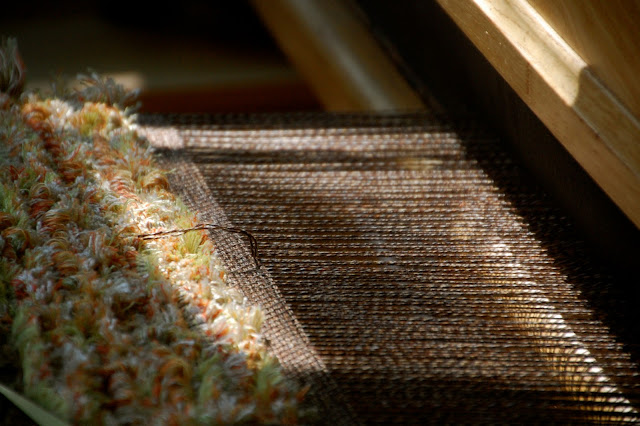 Weaving helps me stay sane, folks.  It is the truth.  I wouldn't lie to you.
When everything seems to bear down hard, the simple motions of throwing the shuttle, beating in the weft, is like balm to my soul.
How cool is that, right?? 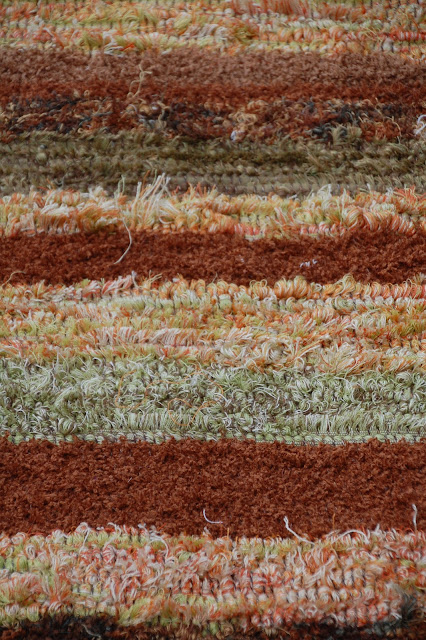 
I couldn't have said it better myself.

Oh boy, I just love what you are weaving right now. The colours are fabulous. (Very Fall-like)

I'm not sure what you're working on, but I love it. Soft looking texture and warm colors.

Weaving soothes.
I love the colors on the Cranbrook.

That looks so cozy, warm and autumnish.

I love Jerusalem Artichokes.. they seem to grow along the pathway in the fields near Frank's place.. so tall.. they just tower over me. The info about its lack of digestive finesse was .. a gas! And that very last line from Moby Dick ("and has the last featuring blow at events")fit in just perfectly.

I am having such a time leaving comments here, lets see if this works... I never knew that about Jerusalem Artichokes.