Wow, I hope today was just a fluke, and not the end of autumn already.
It snowed here today, rained, then snowed, then rained.....you get the idea.
It was cold and damp, and I still feel chilled.

But the harder it snowed, the more frantically the birds jockeyed for position at the feeder.

This guy looks like he is saying, " Do you expect me to fly in this stuff?" 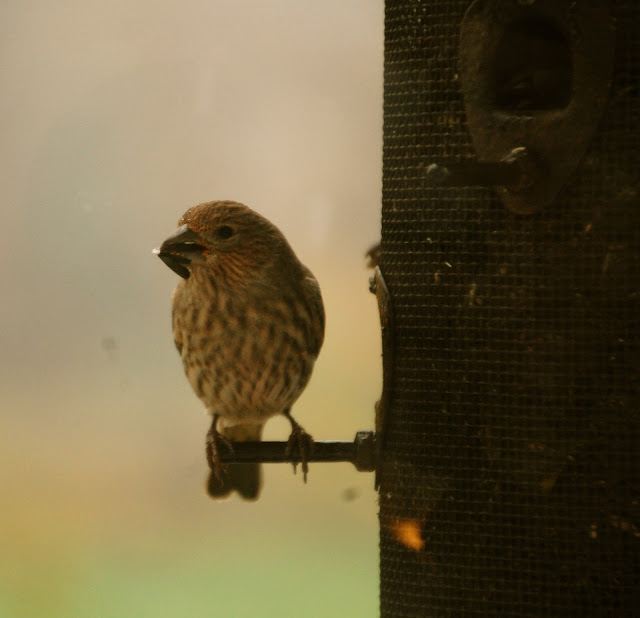 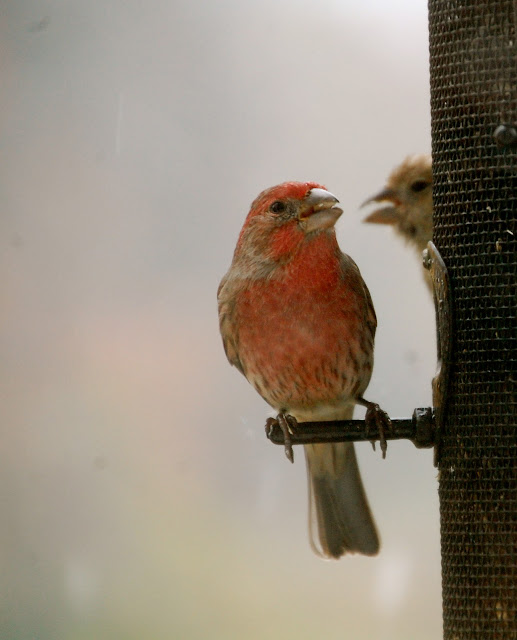 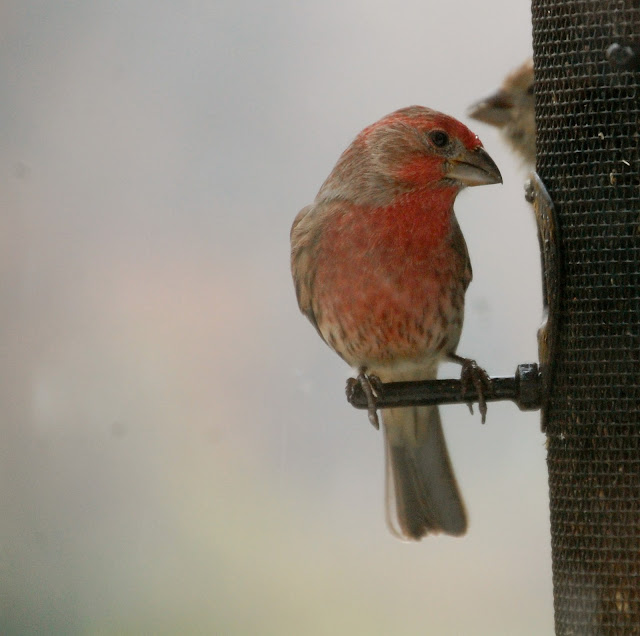 Yes, they were a little nuts at the feeder.
We were staying warm, and busy, in the studio. 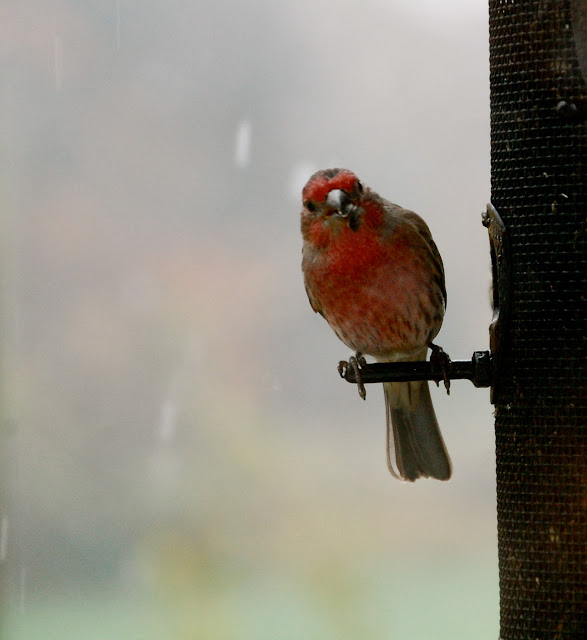 The sewing machine is all together, with the help of a friend.    I would have slashed my wrists half way through it.  Seriously.  We had to call the place in Montreal where I bought it, a few times.  They were incredibly helpful, and supportive, which is why I bought the machine from them. 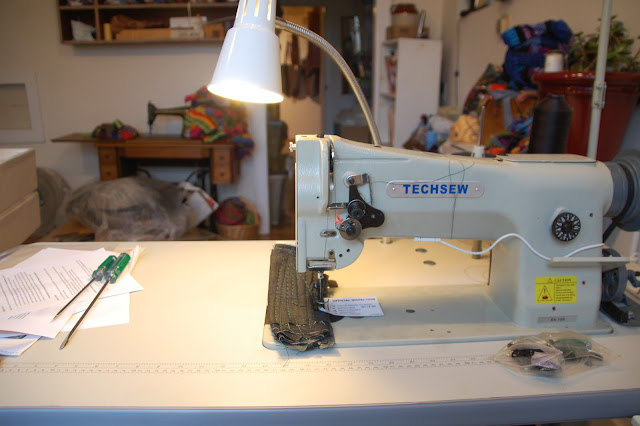 After I watched the threading video MORE THAN ONCE, I was able to thread it, and get the bobbin wound.  Then I tried it out.  Hesitantly.
I admit it.  I was scared, worried that I would hate it like the first one I bought, or that I wouldn't be able to get it running.

All so not true.  I not only got it going, I tried it out on a couple of things and it sews beautifully.

Usually when I sew tote bags together, I have a difficult time sewing the sides up.  The gussets are so impossible, I sew them by hand.
I had an unfinished tote, so I decided to give it a try.  This machine sewed through the corners like they were made of jello.
Hallelujah. 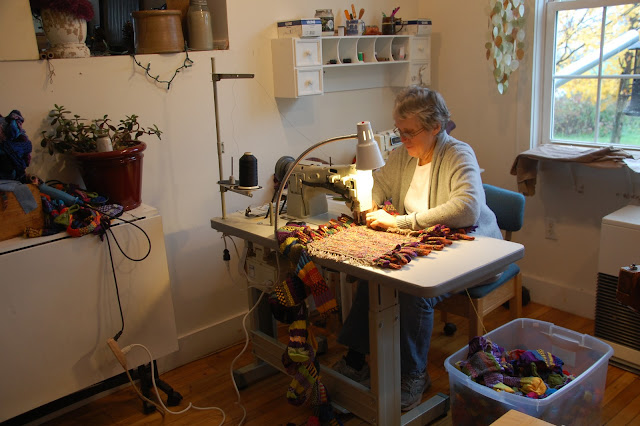 I have been known to make occasional crappy decisions.  Thank God this wasn't one of them.
Whew.

Now I can't wait to make up a whole new batch of totes.  They're going to be a breeze. 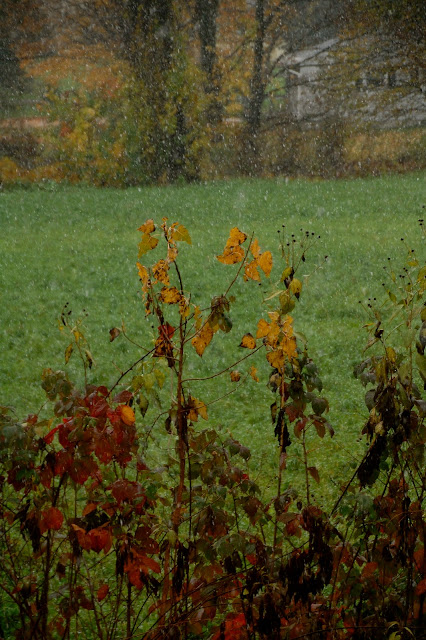 Oh, my gosh. Look at it snowing. Wow. And it's only October . . .
Stop the presses! Hilary has been known to make an occasional crappy decision. Um, join the club, girl. Ha!

Love to see you working away in your studio. You should post more pics like that. What is that gorgeous red bird?

Funny little bird conversations. I hope they are ready for the cold.

The sewing machine and I never have gee-hawed (as my father would have said).... I'm good at the hand sewing and embroidery. Of course it could be that I've got an old cheapo Kenmore!

We become so easy to please as we mature, don't we? And easy to amuse, too. ;) Love the birdie shots and quips, and I'm glad you're happy with your new machine.

Sorry, that snow was due for us, and it just skipped right over Wisconsin and landed by you!

UGH snow due 'north and west' of 'here' so the crack meteorologist decreed this morning .. we here are getting temps in the 30s today and rain tomorrow ... UGH .. love the bird shots and love how we are not the only ones with 'rigged' electrical wiring ..

Love the finch shots and am glad you're happy with your sewing machine. I don't think I've seen one in operation since my mother died. They always fascinated me. Couldn't quite figure out how they worked. But I'm not the sharpest needle in the sewing basket.

And that last shot is a beauty. I'd be looking for a frame for that one. Good stuff, Hilary. :)

So good to see I'm not the only one that eavesdrops on the conversations of birdies. I just love your studio space, it reminds me a little of a place here in Maine called ERDA in Monroe that I have visited a time or two just because it has such great atmosphere. ~Lili

Oops I meant to say ERDA in Cambridge!

Love this site! I can't believe it snowed already. But I have been blogging about staying warm as well. Have a good weekend!

Snow! OH HOW I LOVE SNOW!! I think it's the quiet. That so soft quietness...how I miss it! Will I ever experience it again? Who knows. Who know.