A girl can change her mind.

Last week, I got a call from someone wanting weaving lessons.  I should have said, no, not now, but I didn't.  Sometimes my mouth moves before my brain engages.
I have way too much to do before this show in November to give up two whole days to one person.
But since I said yes, I decided to make the best of it, while promising myself I wouldn't take any more commitments on until after the first weekend of December.
Then today, she called and cancelled.   She hoped I didn't mind.
Didn't mind??  Heck, no.  I didn't  mind at all.
I was THRILLED.

I have to admit, I have another obsession, besides looms.  Yes, tis true.  I didn't actually realize it, until just lately I took an inventory.
It seems that I have 6 sewing machines.  Yes, I do.
Sad to say though that none of them really does  what I want them to do.  And because I push them to do it anyway, there is usually at least one of them out of order, or in the shop getting fixed. 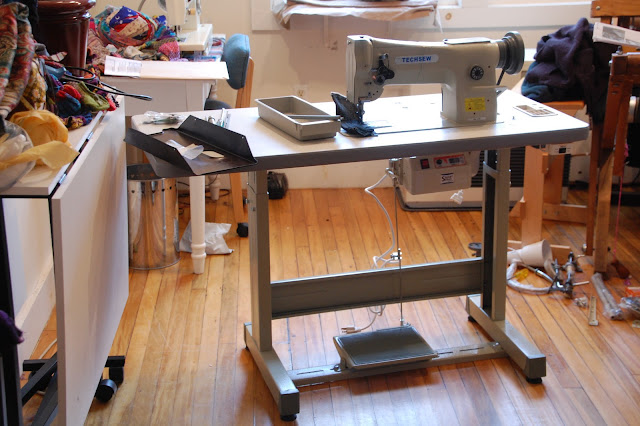 Brand new, UPS just delivered it.  I have anguished over buying it for a while.

I had an industrial sewing machine several years ago, and I hated it.   It had a clutch motor and sounded like my old VW bug from 1965.  But what turned me off entirely was its speed.  It felt like it was going to suck my arm right into it.
So I finally sold it, and said I would never buy another.

I relented.  I am sick and tired of fighting with home sewing machines, trying to make them  do heavy work, that they don't want to do.  They eventually burn out.


I found this one at Raphael's Sewing, in Montreal, Quebec.  The machine is big enough, the presser foot raises high enough, to do the work that I want it to do.
But what really sold me was the motor.  They gave me an option to buy a Servo motor, instead of a clutch motor.   It only makes noise when you step on the pedal, and the best part........it has speed choices, and once you pick your speed, it doesn't matter how hard you step on the pedal, it still won't pull your body in starting with your arm. 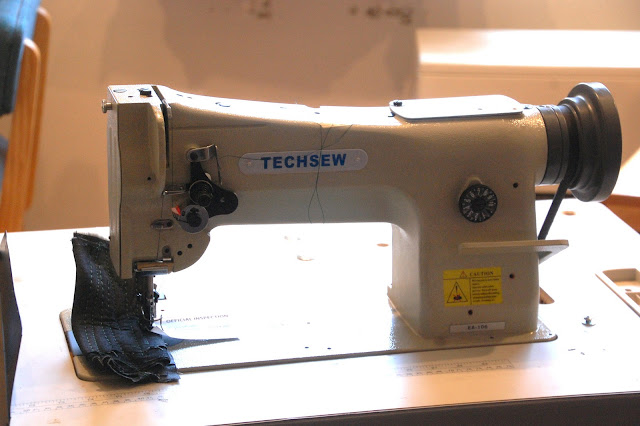 Tomorrow I am going to take close up photos of the threading, before I do anything else.

I AM going to love this machine.   Just sayin'.

And then I am going to get rid of some of the others........one to a daughter, one to L, and who knows who else.
One obsession is quite enough.

Wonderful! I know you won't regret it. The Tuesday Weavers have been keeping an eye out for something like that as well. For now we are making do with what we have.

Isn't it a great feeling when someone cancels something that you didn't want to do anyway?! That's a very cool-looking machine you have there!

Glad you found one that suits you! Listing the others on Craigslist??

It looks nice and sturdy. I would like to buy a new sewing machine, but every time I look it seems daunting. That, and I really haven't sewed in many years. Have fun with your new friend.

I'm so happy you found a sewing machine that fits your needs. I'm not a sewer so my Singer works just fine for me but I can see you need something more more powerful.

Nice machine Hilary, I have no experience sewing on that brand but I do have many years of experience sewing on commercial Juki machines. In another life I used to sew marine canvas and sails, Juki was the machine we used in the shop. My only advice to you is to not get too carried away and lose your concentration, sewing over your finger with one of these guys is an experience I hope never to have again in this lifetime.

Oh, and don't feel bad about your other addiction, I have 3 sewing machines currently - all of these machines are wayyyyy older than I am. My problem is that I adore that old Singer machines - they work well and I love the way they both sew and sound when you are using them. Sold a fancy shamancy Husky machine that cost more than I care to remember - had it 6 years and I detested that machine for all 6 years. Give me an old Singer and I am one happy seamstress.

Enjoy your new baby, she looks like a beauty.

When I was in school, we had the industrial Consew machines in our classroom. I never did get the hang of them. They scared me because of that feeling of being sucked in with my fabric. I was told that they had been set at their lowest speed, but that seemed to be at least a thousand stitches a second. I tried to do as much of my sewing as possible at home, doing only my design, patternmaking and cutting in the classroom. It all worked out.

Huh...after reading this post, I just realized I own five sewing machines and a serger. Two treadles, three electric and the serger.

Good grief. I never thought of myself as a sewing machine hoarder. Um, thanks? ;-)

#7 looks formidable. In a good way.

That's impressive. And I love you bird photos. Snow/wet rain here as well!

So does #7 have a model number? I'm wanting to make bags but don't want to ruin my regular sewing machine to do it.