When I got to the studio, I had to get my camera out right away. 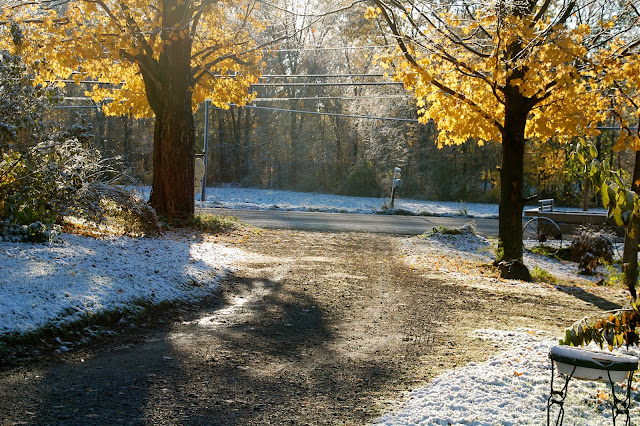 This is officially the first snow storm of the year, and storm number TWO is on the way.....tomorrow. 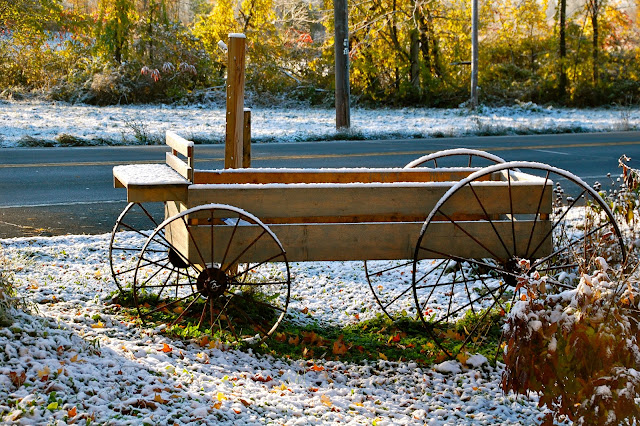 I love the early morning light at the studio.

It is kind of crazy though, to have snow, when the leaves are still on the trees. 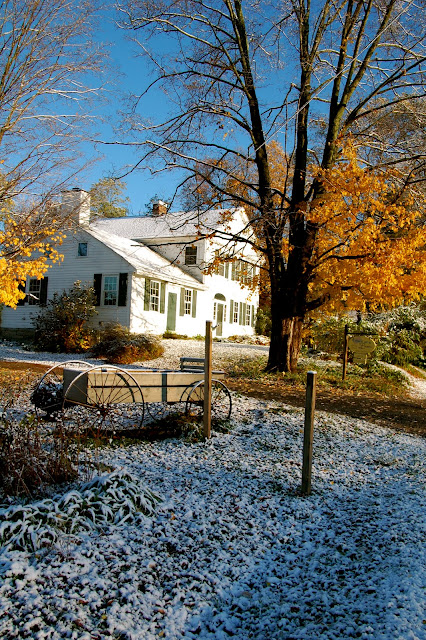 I can't think about  the W***** word.   I know this is just the beginning, and there are MONTHS of it to come.   It's one of those things  that make taking one day at a time necessary. 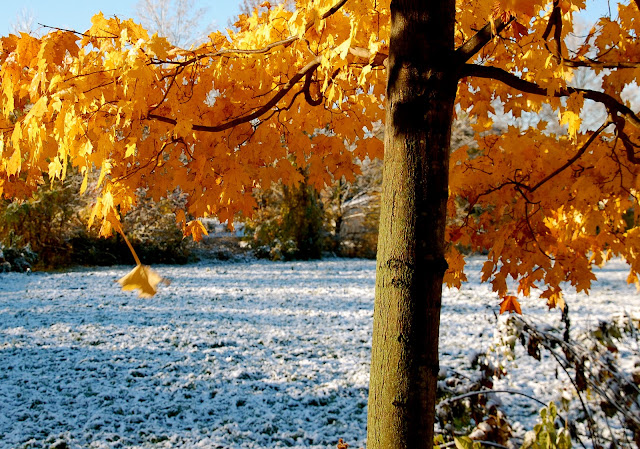 Inside, they were enjoying the sunlight, too.
Playing, chasing, battling.  It went on for a while. 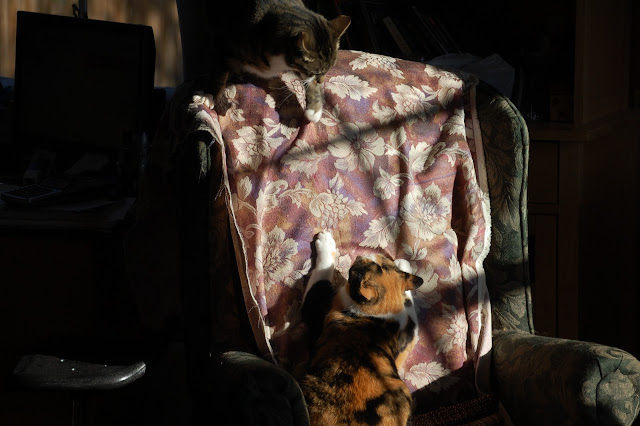 Lucky for Jinx, she is faster than Miss Puss.  Cause Miss Puss is meaner.  For real. 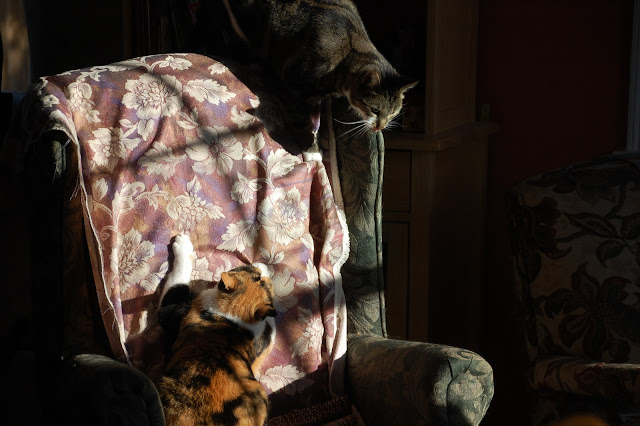 Michelle is a recent student who has definitely been bitten by the weaving bug.  Here she is putting the heddles on her NEW loom.   She is excited.  I remember how it felt, my very first loom.  For me, it was the beginning of big changes in my life. 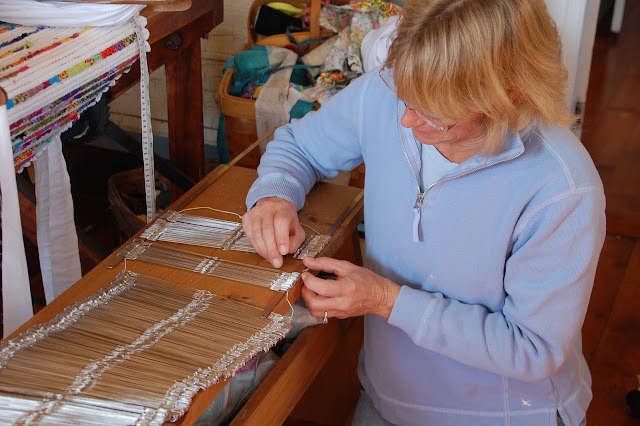 Here is my daughter,  weaving a placemat.  She gives me hope that someone will carry on Crazy as a Loom someday. 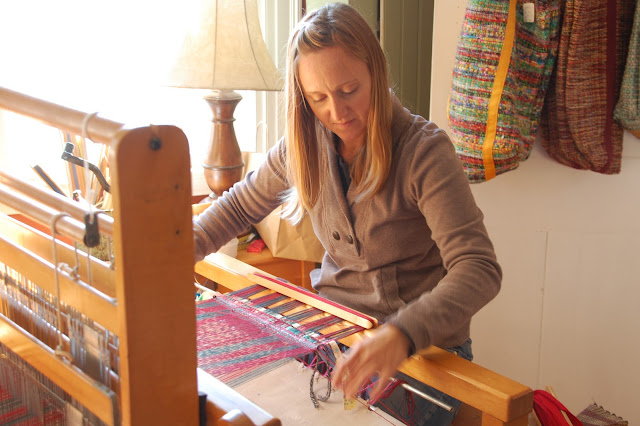 It was a busy day, even more so than usual.   Now I think I'll just throw myself on the couch,  and throw my paws hands in the air. 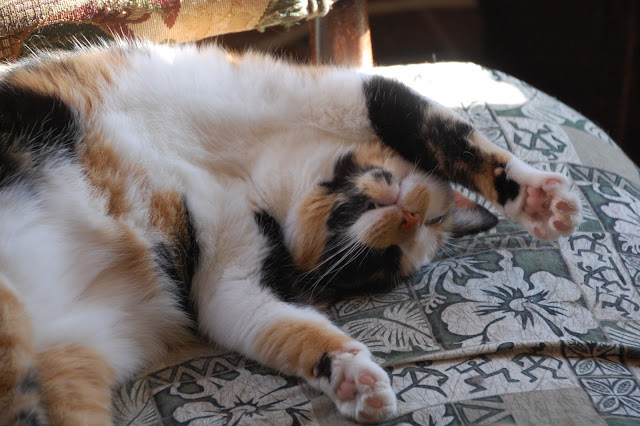 Gulp. Yep that white stuff is making it's way here too. It is so very pretty though with the glow of those autumn leaves in the early morning light. ~Lili

No snow up here yet but your pictures with that light are amazing! Very painterly with your kitties on the chair! Nice to see new weavers...stay warm, Hilary and Lois!

Ohhhhh sorry, it skipped right over us and landed on you!

We had just a smattering of snow, more like flakes that hit the ground and immediately melted, but it was oh so cold today. Not sure what tomorrow holds in store... I'm afraid to even look at the weather report!

Gosh, your pictures are so wonderful... our leaves are still colorful and on the trees too. How strange this snow is!

Snow?! That's so hard to fathom (from way down in still-short-sleeves-weather Georgia). It sure is pretty, though.

Wow: snow so early in the year. Here in Holland we just have dull grey weather and much rain and wind. I'm not really looking forward to snow, though. But I loved seeing your photos.

Awesome pictures! We have the second storm visiting us here in NJ today... I am excited to see snow and colorful leaves together as it is pretty... but scared too as it is the first time in about 60 years that we have had snow before Halloween? Always enjoy pics of the kitties! :-)

I guess I can only say it's pretty because it's not here!
I'll appreciate your pictures while I wait for OUR first snow which is usually around Thanksgiving!

We got a wet 1/2 inch here in Central VA and it was gone by lunch.

Being a new transplant from the Deep South, I'm so excited about actually having 4 seasons that you'll hear no complaints from me!!