Finally sitting down.  I feel like I have done the whirlwind tour today.  Two doctor appointments, pharmacy trips, grocery lists.
And some work at the studio, but nowhere near what I would have liked to get done.
Ah, well.
It is what it is.   I am embracing my limitations right now.  What else can I do?

While waiting for my mother in doctors' offices, and at physical therapy, I have been knitting.
This is a fun pattern for fingerless mitts.  I made two pairs, I'm on my third. 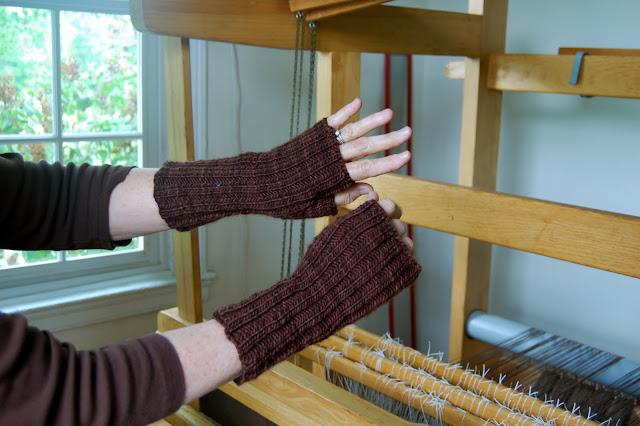 I have been wanting something to put my sewing machine on.......at home.  Sometimes in the evening, when DH is watching baseball, I sew.  And dragging it out to the kitchen table is painful.

I had been to one of the local used furniture stores a couple of times, and only saw one thing that might work.  It was a little wider than I wanted, and it was $150.
But today when I went there, they had two others to choose from.
I ended up buying this one, because it had drawers for all my sewing gear, and it was narrow enough to fit the space I had for it.
AND, it was $45. 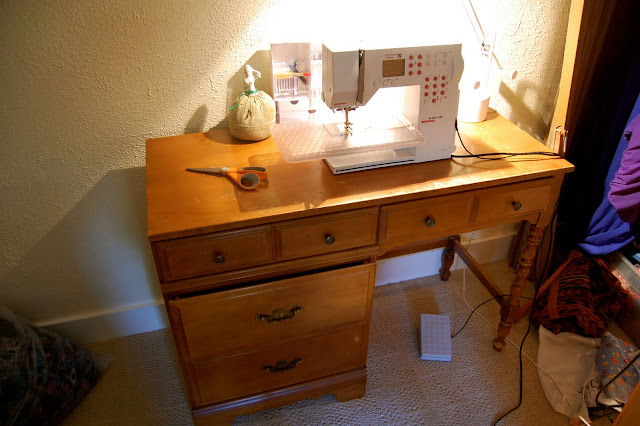 It was a little more beat up than the other one most like it, but it is very solid, and heavy, and it's just about perfect, scratches and all.
I was sewing these together tonight, while I was waiting for Idol to come on. 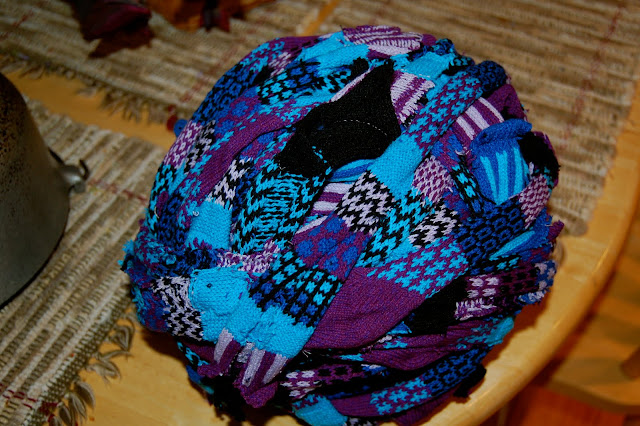 I have to come up with names for all these different colored rugs.   This is the first batch of ONE COLOR rugs.  What shall I call them??
Shall I have a giveaway? Hmm.
Sydney, what do you think??? 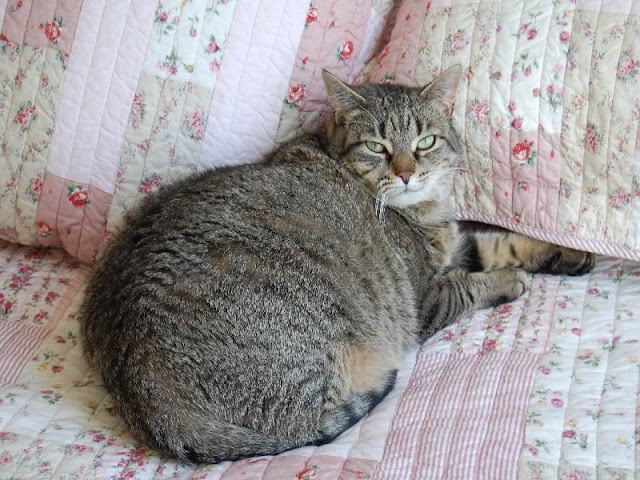 Sydney says:
I think it's time for my nap, that's what I THINK."
Idol is on, or Singing Survivor, as Kate over at Country Girl calls it.........I like that.
But tell me, when did American Idol go country???   Not that I have anything against country, but it is a little weird, isn't it??
And The Voice is on later, if I can stay awake.
And there we have it .....another day flew right on by.
Hope it was a good one.

Personally, I LOVE pre-scratched furniture. That way I won't make the first scratch and then feel bad! :)

I would certainly use the fingerless mitts if I were a texter. They look quite handy. I'm still looking for a table for my sewing machine... I want something large so I can also use it for artsy fartsy projects if I want to. Will definitely be a used piece of furniture when I finally find it!

Actually, I couldn't wait for the day to be over. It's a shame, really. Maybe tomorrow will be better.

The cat thinks you should have a giveaway. I can tell.

great little desk for the sewing machine-not digging the Country on Idol either (not a Country fan). You have my brain whirling for rug names, too.

I was sewing strips on my electronic machine and kicking myself for buying it and giving my mechanical machine to my DIL. What's done is done, and I wouldn't recommend anyone do what I did.

Well...I don't text. However, the thing I love best about fingerless mitts are they make hands look so young!!

Just look at those girly girl hands in your photo!