My father used to say sometimes, that he felt like he'd been dragged through a 'knot hole'.
He was a hard worker, and I imagine that he did get very tired some days.
I feel that way today.  It has been quite the weekend.

Thinking everything was under control, I fell into bed last night, the Weaving Weekend half over, and my mother settled into the hospital.  So I thought.
Then about 4am, the phone rang.  In the dark, quiet night, the harsh sound of the phone flipped the switch on my pulse.  I could feel my heart beating harder in my chest.
The voice on the other end immediately reassured me that everything was OK, but there was a problem.
My mother was agitated, confused, raving, and would not calm down.
Deja vu all over again, goes the saying.

Four years ago, when my mother had her hip replaced, and was given morphine for pain, she became seriously confused and almost psychotic.  At one point,  I got a similar phone call, and they put my mother on the phone with me, hoping that would do the trick.  But my mother refused to believe it was me.  She finally demanded that I tell her the "secret word", to prove that I was, in fact, her daughter.
My head spun.  Secret word?????  What?????
Then I remembered. When I was 8 years old, I had eye surgery.   The doctor told my mother that I would have to have both eyes bandaged for 24 hours.   My mother and I came up with a secret word, so that no one would try to pass themselves off as my mother.  The worries of a child in a frightening situation I guess.
"What's the secret word?", she asked.  I stammered.   I guessed.  She screamed, "I knew it wasn't you."
????
Then finally, it popped into my head.  "Horse, it's HORSE."
Silence.
"Oh, thank God, it's YOU."

So this morning, talking to the nurse, in what seemed like a conversation I have had before, I told her to tell my mother I was on my way.  Tell her that I told you the 'secret word',
When I got to the hospital, my mother  still looked like a deer in the headlights, but she had quieted down.
After a while, she said, "Well, that secret word is sure getting  a work out."

Ay yi yi.
All this because she had narcotics for two days, even after I warned them that this would happen.  She is home now, and seems better.  Exhausted, falling asleep in her chair, but better. 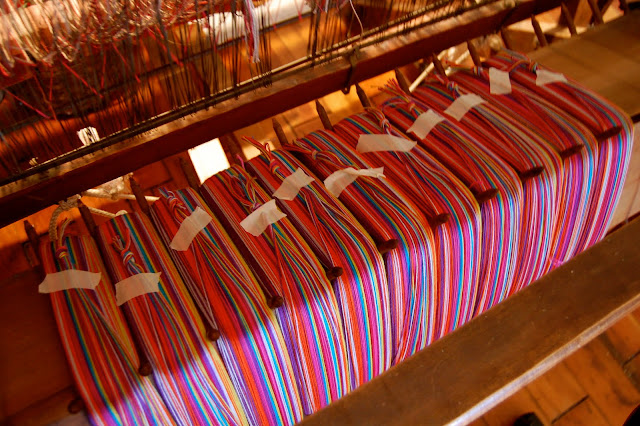 The weaving weekend was a success, in spite of all the interruptions.   I stayed with my mother until about 7:30am, my daughter was on her way.   I got back to the studio just as my students were having breakfast. 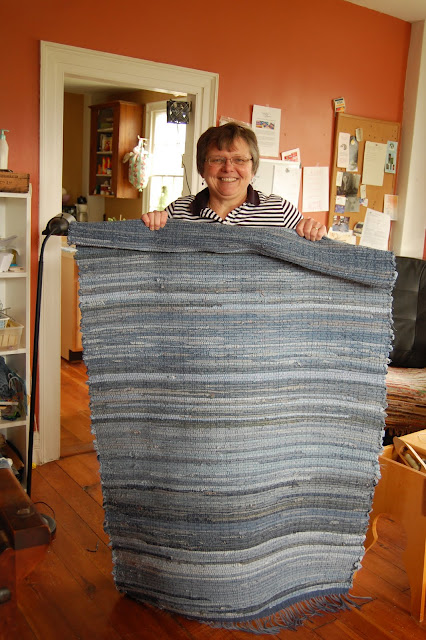 Every time I host a weaving weekend, I am amazed at what wonderful people come to Crazy as a Loom. 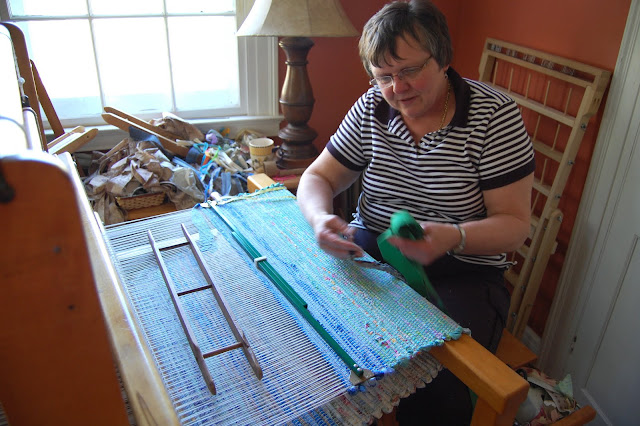 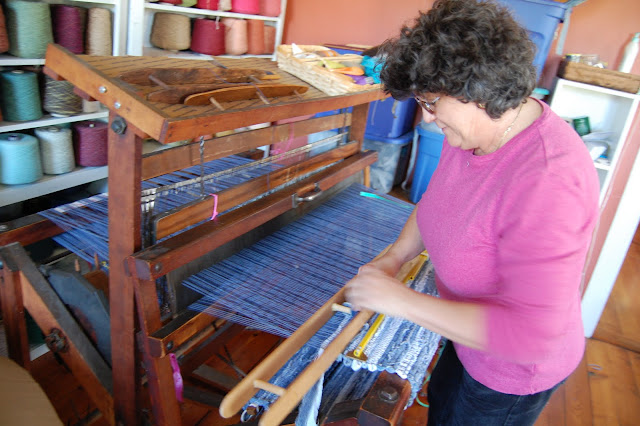 I even got a chance to finish a rug I  had started on Friday. 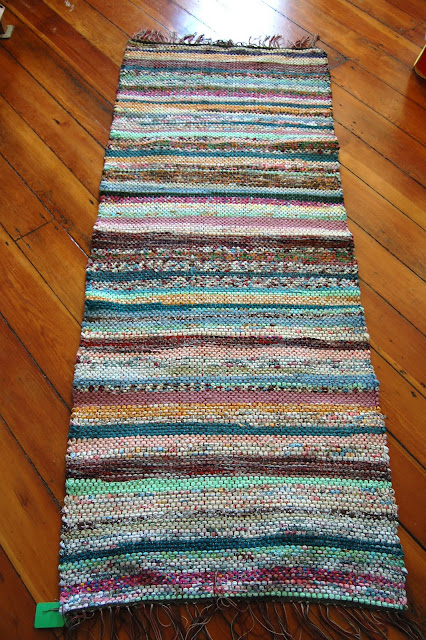 Now I need a good night's sleep, to get ready for whatever is next.  I am going to be staying close to home, hoping my mother will get back to being her old self.  Soon.

Thanks for all your kind words, and encouragement.  It's nice to know that there are so many blogger friends out there.
You're the best.

Gosh,can't imagine how you got through the weekend! I sympathize. Actullay, empathize -- my mother went through a hip replacement five years ago, after a fall. I wasn't teaching a class, but I had a five-month-old baby I had to drag along to the emergency room...would rather not relive some of live crises. It's encouraging though, as I still continue with her issues, to know that life (weekend classes!) can still go on. Oh, and just loved the story about the secret code -- priceless.

Continued good healing wishes for your mom. Drugs are powerful. Hang in there. How soon can they or did they switch them to something calmer? You have had quite a weekend. I hope your week is more restful.
Good wishes to you, too.

I feel for you.. and for your Mom. I hope she can feel settled soon. And that her pain eases.

I had to do a double take, as your multi-colored warp looks just about like what I'm working with now! And I just finished a five foot jean rug...... Apparently we're the same person. My 98 year old mother reacts the same as yours to codeine, and I've spent some long nights being Calm and Rational. We need a secret word!

Oh, I'm glad she is doing better and is home now. I know how terrified you must be when the phone rings at 4 a.m. Your poor mother. She must have been terrified too. Will be keeping you in my thoughts over the next few days, hoping things settle down.

LOVE the rugs your weavers were able to do! They must feel so proud of their work!

Hope the weeks brings quiet and healing to everyone! What an experience! And yo managed to make a great weaving weekend to your guest, too!

You are good! I had a secret word with my girls and for the life of me, I cannot remember what it is! Geez!
I can't tell you how bad I feel for you and your Mom right now. All I can do is pray that everything goes smoothly for both of you and that there aren't anymore traumatic incidents happening. Take care of yourself too. (I know you know that already)

I'm glad your mom is doing better and that you were able to remember that secret word! ;-) Wow...a weaving weekend?! How fun! I always enjoy reading your stories and seeing your colorful and fun pictures. Have a great week!

It sounds like you have great support. So, with that in mind, be sure to keep some studio time for yourself. You need it to keep your batteries charged.

I have a lot of empathy for your Mom. I somehow SCREWED UP my shoulder and injured the rotator cuff. The waves of pain that go through there at the sightest provocation are far worse than anything I have ever experienced. My surgery is more elective so I will try to tough it out till the end of summer.

I’m not going to say what everyone else has already said, but I do want to comment on your knowledge of the topic. You’re truly well-informed. I can’t believe how much of this I just wasn’t aware of. Thank you for bringing more information to this topic for me. I’m truly grateful and really impressed.

Sorry to hear about your mom, and I hope she's feeling better soon.

We had a secret phrase when my kids were little. I don't think anyone would ever guess what it is because it's so unique. My daughter is planning to pass it on to her children, otherwise I'd give you a laugh and tell you what it is.