I had a lady from Massachusetts coming to the studio this morning, so while I was waiting, I started an order.  The fabric, all 37 lbs of it, was cut and wound into balls, waiting.
I  am always chomping at the bit, wanting to get started, but when the granddaughters were there yesterday, it seemed like a good time to do something mindless in the midst of their commotion.  So I wound all the fabric that I had previously cut, in preparation for this 7.5' x 13' rug.
Today, the weaving was effortless, because the fabric was ready.  Why don't I do it this way all the time??
I have no clue. 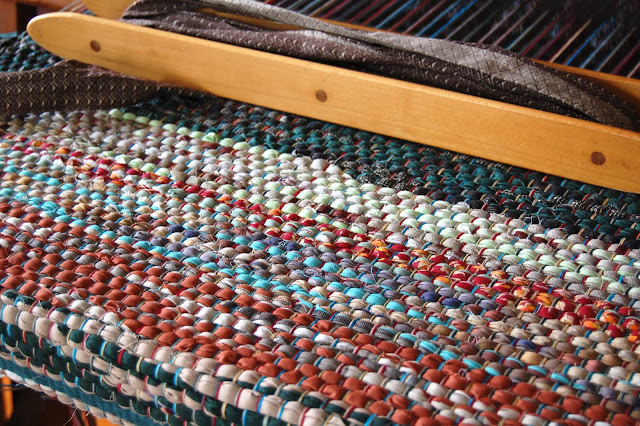 I came home at 1pm, and my mother wanted to know what was wrong with me.
I answered that it was Sunday, after all.  And that I thought maybe she would like the company.  She said that was nice.
I loved all your suggestions, whether I agree or not, they got me thinking.  So my mother and I had a bit of a conversation today.  I told her we needed to think about the future.  She immediately said, "I know what you're going to do."
YOU DO???
Strange, because I don't have a clue.
"Yes, she said, you're going to put me in the nursing home."  And she made a motion with her thumb in the direction of the nearest one.
I told her that was the farthest thing from my mind.
It is.
I want her to stay in her home for as long as she is able.  I did, however, make it clear that I would not be able to take care of her if she was bedridden.  She said she understood that.
Then she did the teary thing, and said, "but you don't like taking care of me."
Specifically, she said that she KNEW that I didn't like doing the more personal things.
I had to laugh.  Seriously.
Does a new mother like changing dirty diapers?
Does nursing staff like cleaning up incontinence?
Does anyone like cleaning up the dirtier messes in life?  Do they do it with gusto??

NO, but they do it.  That's the testament of love, I told her.  They DO it.  They don't LOVE it.
But they DO it.
Then we got to the nitty gritty.  How much money she has every month, and how much she can afford to pay for day care or something like it.
Not that she needs much right now, but in the future. 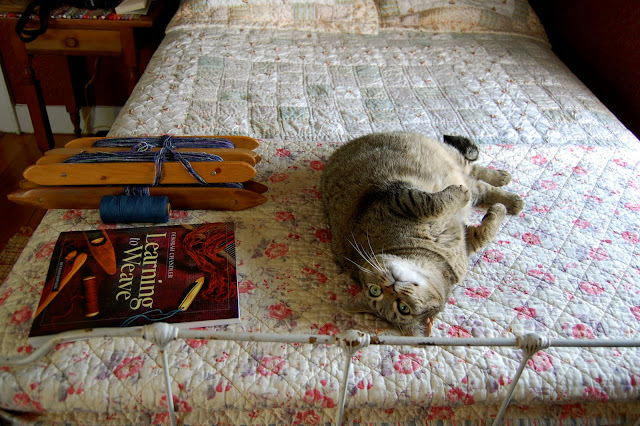 Sydney says:
If you're gonna treat her like a child, you can't get mad if she acts like one.
Just sayin'.

So we had tea, and we talked while I made two rhubarb pies.  When she had use of both of her hands, she used to help me cut the rhubarb.  She missed that.  I know.  But neither of us said it.
Then I made some kale/white bean soup, a recipe that I made up as I went along.
And corn bread.  What a combo.  Right??
All in all, it's a good day.  I remind myself to do it one day at a time.  Why would you want to do it any other way?

I've been reading your blog every day for awhile now - what does it mean to be a follower?

I love the looms, the weaving (I'm new to weaving myself - only a RH loom so far), the cats, the vegetarian dishes and your honesty.
Please don't stop - with any of your sharing - I want it all - and more cat pictures and weaving pictures would be very welcome, :)
Abby

I can really resonate with this post. My grandmother had a massive stroke that left her brain dead, with a feeding tuve and bedridden. She has been this way for 5 years, my mom has been taken care of her in her home for those years and it is difficult and hardwork. I often wonder if my grand would still be alive should we have put her in the nursing home? But I really don't have that answer, my mom never gave us a chance to find out. I have new respect for the CNA's that do this type of work, because I personally would not be able to do it for anyone else, but a family member. Cleaning, bathing and taking care of dead weight is gruelling work. But it can only be taken one day at a time, remember God will not bring you to it, if He can't bring you through it.

Don't borrow trouble from tomorrow. Each day has trouble enough of its own. <-- That sounds like such a downer way to say one day at a time. But it helps me remember not to take on worries about stuff that hasn't even happened yet.

Reading this has left a smile on my face. A good talk, good smells from the kitchen, and a better day than you thought it might be perhaps. All round good.

Gosh, all this is ringing so true for me. Even the not having use of both hands; my mother is so frustrated that she can't chop anymore or open a bottle.

I really like your blog:) I am sending many warm thoughts:)
Ela from Poland

We've just set up a date for my family to get together to set up health directives. We've just come to the conclusion that we need to have that hard but very necessary conversation. It's good that your Mom and you had that talk. It lightens up one's load a little.
Good for you. Saying prayers for you and your Mom for all the strength you need to get through this.