Finally, news on the Bubbalee front.

We knew that she had her kittens on April 9th, and we knew that she had them under the shed across the road.  The neighbors told us that she had two kittens, until just the other day, when they said, no, they had seen FOUR.  We knew that 6 weeks old was a prime age to take them away from their mother, and try to socialize them.  After 10 weeks, it gets really tough.
So we took a crate, and a Havahart, and canned cat food across the road, and enlisted the help of the family that owns the shed.
They were on the same page.  Get the kittens before they get killed in the road, too old to socialize, and old enough to have more babies.
Today.....YAY.  We caught THREE of them. 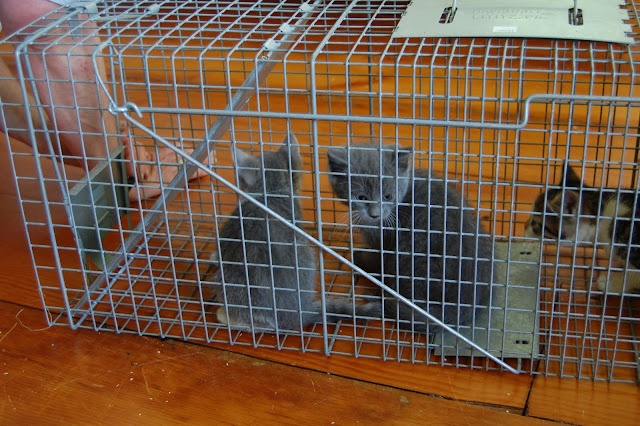 They are frightened, but easily picked up.  They hiss, and hide.  There is one light gray and white, one tiger and white, and one dark gray with  white feet. 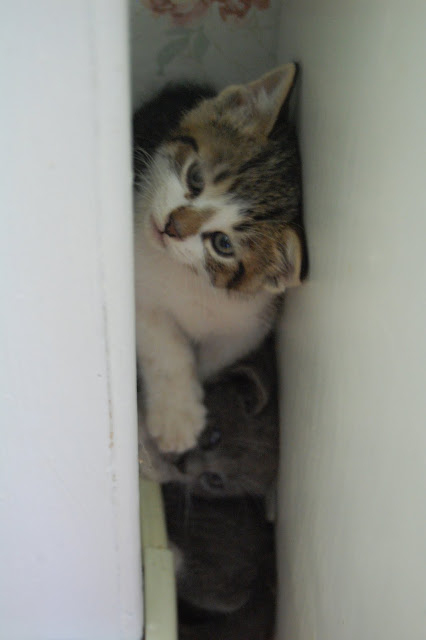 If you look closely, you can see that one of them is sitting on top of the other one.

They are safe in the front bedroom upstairs at the studio.  They have a litter box, food, water, and a few places to sleep.  We are leaving them alone for the night, so they can calm down, and look around.  Tomorrow we will sit with them, hopefully get them comfortable around us, and ultimately find homes for them.
I am a dreamer, always.
Since it took the weight of all three of these to spring the trap, we are putting the smaller trap over there to try to catch the fourth, and last kitty.
Bubbalee will be mad.  She's next.   We have to catch her before she gets pregnant again.

On the rug front, we have ONE sample, in pinks and purples. 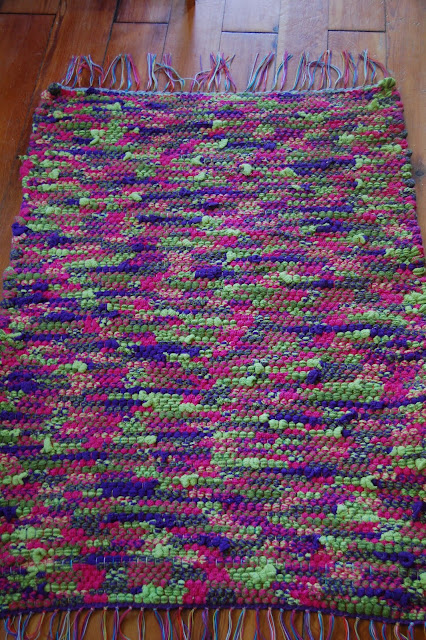 I asked Sydney if she wanted to do a book with me. 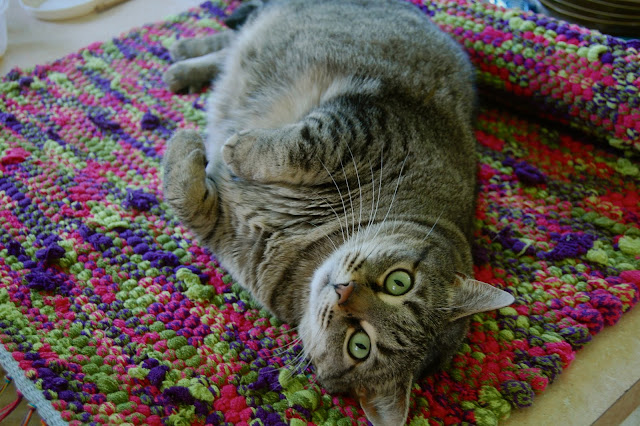 Sydney asks:  Does this rug bring out the green in my eyes?? 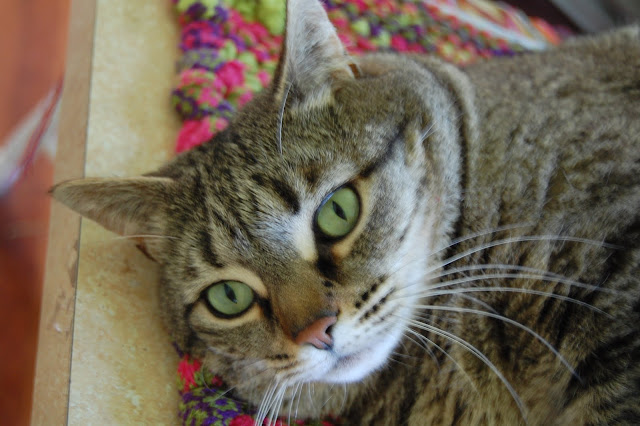 I'm so glad that you were able to catch these kittens. we have a colony of feral cats in our neighborhood that a lady down the street feeds. I try and catch the kittens born in our back yard as soon as I find them. I just hate it when they get run over.

Oh, if only I lived closer...I am such a sucker for gray kittens!!!

hoping you can catch #4 and their mom and find homes for all!

You did a great job of trapping the babies, three down, one to go.
Keep in mind, mama cats can come back in heat even as they are nursing kittens, so the sooner you can trap her the better.
They are handsome little critters.
Those rugs are amazing, just love the colors, and Sydney...well what could be sweeter.
~Jo

This tabby looks like the more favorite cat, and smartest, my mother had (I'm allergic but love them) His name was Trigger. (Actually it was Tigger but my father, deaf in one ear, renamed him Trigger)

Good for you! Maybe mama will follow that last ktten into the HavaHart?

Yes, Sydney...the green in the rug perfectly compliments your eyes.
You look MAHVELOUS!

They're adorable. I'm glad you were able to catch these three and hope the fourth and mama are not far behind. How is Sydney with the wee ones?

The rug looks vibrant and beautiful!

Oh, Hilary, this is such good news!! I was thinking about Bubbalee just the other day. It is wonderful that she and her babies have you.

(This is Connie in Hartwood. Google won't let me sign in and comment as myself right now.)

Sweet kitties, too bad I´m allergic and lives in Sweden(soon to be UK)..

Great news. They are adorable. I'd be a taker, but my two cats would not allow another animal in the house.

Now THAT would be a riot!

Sydney would say: "Buy the book or you'll get scratched! Just sayin'".

A book? Really?? About weaving or cats? OR weaving with a cat?

Oh yes! Yes! A book. Maybe a movie. Who would play you? Meryl Streep. Or Susan Sarandon.

And it would have a happy ending, right?

A book about a cat who weaves, that would be wonderful! So happy the little ones are on their way to a better life, now to trap Bubbalee and the last baby. You have a big heart, it is wonderful to know that people really do care about our furry children. Hugs to you for your big heart and hugs to Miss Sydney for her beautiful green eyes and careful rug planning.

I think a book would be a lovely idea, Hilary.

On another note, yesterday I washed both of the rugs. Finally! They came out great.