NOT.
I heard this morning that it was -17F below zero locally.
I didn't need to know that.  Altogether TOO much information.
It's cold.  Really cold.  Putting a number to it just adds insult to injury, if you ask me.

Next and Nuff have a big box in the loft of the barn, which L has surrounded with bales of hay.  It has a blanket, and a heated cat pad, to bring their body temp up when they lay on it.  They scoot under the door and up the stairs, where hopefully, they are safe from predators, and reasonably comfy.

They also have the heated water bowl, food all day, canned and dry.
They have their solar house, in front of the barn.

When the sun comes out, they are in it.  Well, they have issues.  If Nuff is in in first, he lets Next in and they lay together, but if Next is in first, even though he is the runt of the two, he will not allow Nuff to come in.  So Nuff sits outside the solar house, looking in. 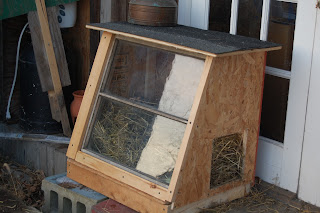 Think we need one more. 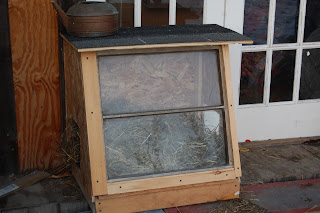 And they have a ratty old box on the porch, that they have  claimed as theirs.  We put a blanket in it, and covered it with some old rugs. Even though the sensible thing in weather like this would be to stay upstairs in the loft, on the heated pad, that's not where they want to be in the daytime.
Have you ever tried to reason with a cat???
I tried this morning, and succeeded, in getting them into the inside porch, where it was cold, but not nearly as cold as outside.  I fed them there.  They didn't like it.
When L came a while later, and opened the door, they bolted.
Unbelievable to me, but they do not want to come inside.

So, a trip to the pet store was in order, unless I wanted to keep worrying about it.  And I didn't. 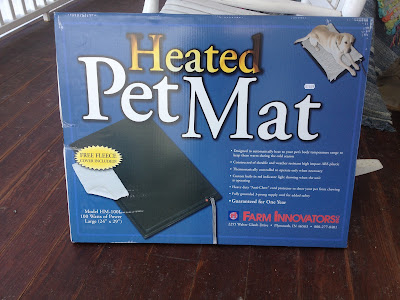 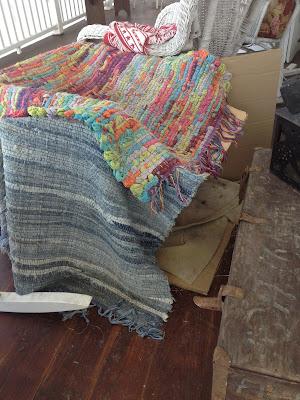 After we put the heating pad in it, we put the sides and the top down the way they were, and plugged it in. 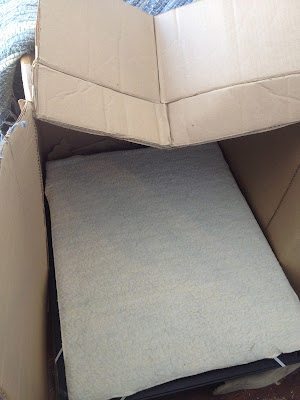 They seem fat and happy.  Their fur is thick and shiny.
I think I am doing all I can do for them, and what's right for them.  I really hope I am.

Does this rug make my legs look short???? 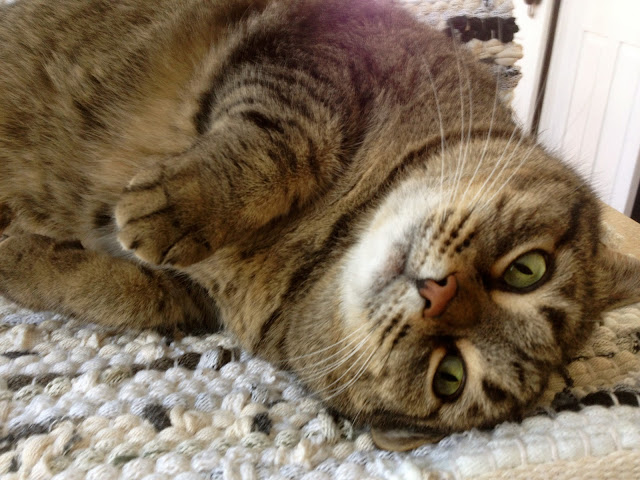 No, Sydney, your legs ARE short.
But you're a beauty, nonetheless.

Please tell Sydney that he is VERY handsome on that rug! God bless you and your family and all the cats! Happy New Year!
Vicki Allen, weaver

Syd, you are indeed a beauty!

Hilary, thank you from Nuff and Next for their new heated digs - they want you to know they are very warm and comfy and to please pass the sardines!

I can tell you worry about them but you are doing so much for them I think they will be fine. They have their winter coats so the worry areas are the ears, feet and tail. The heated mats will take care of that.
You are such a dear to those throw-aways. Wouldn't you love to put people 'out' in this cold that would abandon a cat? Honestly! BTW - love the hat from your last post.
"Hi Syd." You are adorkable. :)
hugs, Deb

LOL Sidney and those little legs!!...

You are such a good cat mother. Really.

Sid, your handsome . I am quite sure the kitty's are very happy and thankful with their heated blanket in a box . Have a good day !

Thank goodness for a softie like you! One who keeps the outdoor kitties warm. Wish all strays could find someone like you!
Don't worry Syd - you have great little legs.
Louise

They are fortunate cats indeed. You're a good mom.

By golly, I do believe they will survive the winter with you there to worry over them. I think the heating pad was a great solution for them.

You are an angel Hilary, caring for those very lucky kitties. I'm happy that they found you, XOXO

That is a great idea on how to make a solar heated cat house with the two entrance/exits! I love it! I took notes in case I become a feral cat mom again - it is likely where I live. I provided previous ones with heated beds for night use but they just want to be out during the day and to sit somewhere protected in the sun. This will WORK SO WELL as we have very cold weather but most of the time it is sunny! Thanks again!
Lily, WA, USA

You are so good to those kitties. How wonderful!


If there is a " afterlife ", I want to come back as one of your kitties. You are one in a million.

Hilary, if I were Next or Nuff I'd be happy. Since they don't want to go inside I think you have provided them with accommodations that help them survive in such cold weather. You are a wonderful mom.

I gotta say though Sydney and my cat Frisky are identical twins, short legs and all.

When I die, I want to be reincarnated as a cat who happens to wander to your front porch.

You are a true gem, dear one.

Sydney is such a doll! Nuff and Next appreciate all your help! :-) It's really cold out there!

you do know that if you get them a second box they'll just continue to act the same way .. they're cats ... every morning Jack eats as slowly as he can while Harry inhales his food then he sits and waits for Jack to move away from his bowl so he can steal his food .. i spend a lot of time being the food monitor vs getting ready to go to work .. oh and i agree .. cold is cold, no need to put a # on it.

That box with the rugs and heated mat looks very inviting! We like it!

Bless you for caring about those cats! I love my cats and dogs and I absolutely HATE cold weather! It's terrible for animals and people! Now the holidays are over, I am ready for Spring--May really--for that is when it gets warm here and I love to spend time outdoors.

You are such an angel to take such good care of those cats!
You make me want to be a stray in your neighborhood!

Oh, Hilary, you are a woman of soul!