Ah, heart be still.
The makings of a little weaver.  And a sweet one, at that.
Every time I threw the shuttle, she put her little hands on the beater bar, and with a little help from me,
she swung the beater home.  Several times.
Then she said, "More".
We repeated this routine for quite a while, until she decided she was finished. 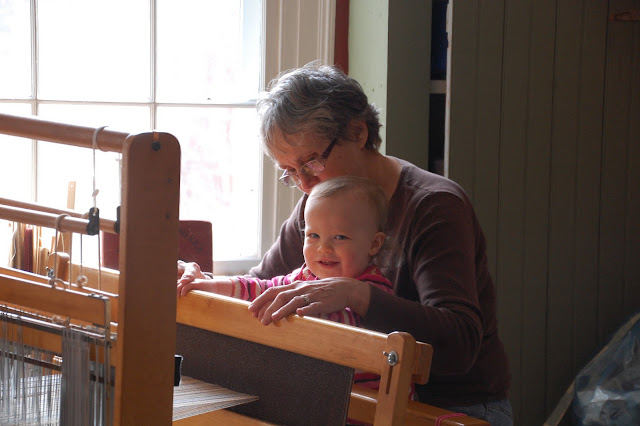 While I show you my recent place mats, let me just say that I am not fond of politics.  Can't say that I have ever understood it.
When I was a teenager, and JFK was elected, my mother was so upset she threatened to put a black flag on the front lawn.  She defended Richard Nixon until it was 100% evident that she was wasting her time.
Even then, she remained a staunch Republican.
When I turned 18, I registered as a Democrat, pretty much just to piss her off.
I never saw a need to change it.
Just the last election, my mother announced that she was done with all those Republicans.  For the first time since she came to the USA in 1946, she voted for a Democrat.
But I am a cynic, folks.  I am not sure if I was born that way, or not, but by the time I was 13, I had what I consider, a healthy suspicion of all politics and all religion.
Seemed to me that churches, and governments, all had pretty much the same intentions.
I'm voting (again) for Mr. Obama, because I believe he is a good man, trying to do a good job.  And because I don't think the Republicans have anyone that I would even consider.
I don't care what party wins, I just want world peace, an end to world hunger, and I want all dogs and cats to have a home, and someone to love them.
Whichever party can do those things, then I'm for them.
But not to get into a debate about the upcoming presidential election,  I know I would tire of it quite quickly.  Weaving is so much more fun. 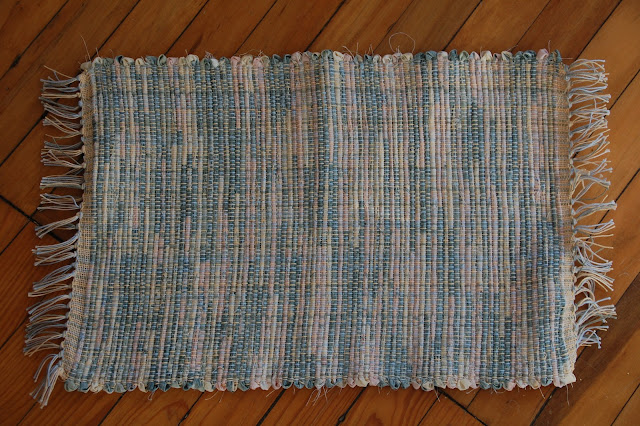 I think it is unfortunate that the only people who can run for president, are people with boatloads of money.
But just because they have a lot of money, doesn't mean that they are any more perfect than the rest of us.  They make mistakes, they say stupid things, they look foolish.
Been there, done that. 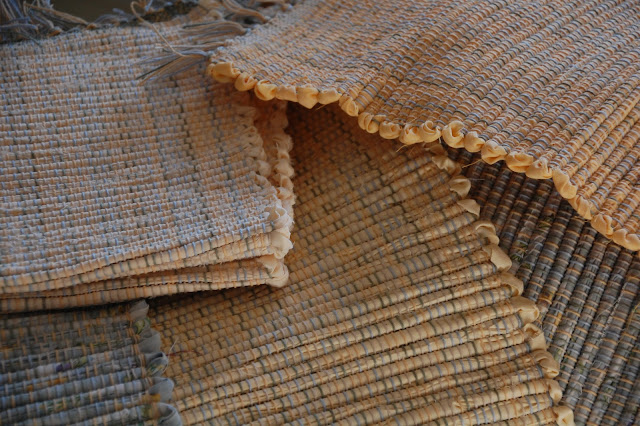 Oh, yes, I confess. I am guilty, too. I have made some incredibly stupid choices in my life, said things I wish I could take back, made decisions that make me cringe now.
I wouldn't want to be running for office, cause surely someone would appear from my past, to remind me of every misstep I ever took.
Ouch. 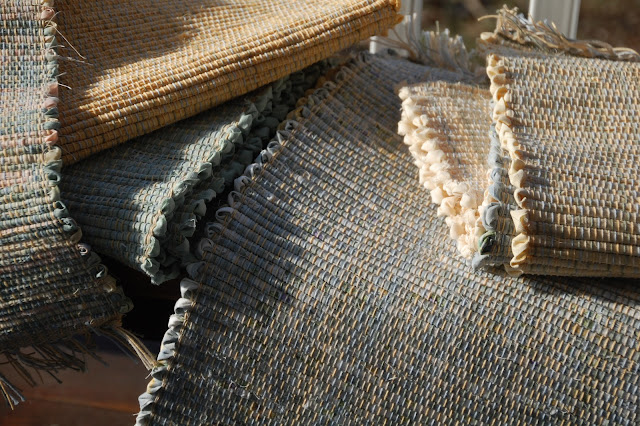 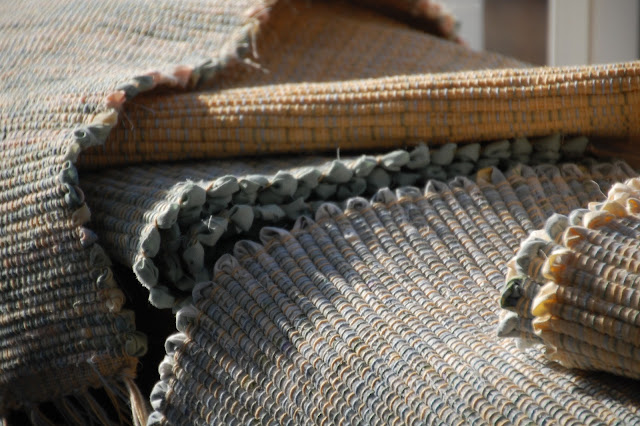 I guess that's why the rhythmic, simple weaving of rag rugs and placemats  makes me so happy.
It's my party.

I would vote for you! I am in awe of the work you get done with that headache of yours....I am sure you could handle them :-)

I wish we were neighbors. I agree with everything you said and think we'd get along very well. Plus, I'd get to visit your studio :)

I agree with your politics. Lets make the world a better place for us and for dogs and cats. Nancy

That is the unfortunate part of it. While none of the candidates could ever foot the bill to run on their own, lots of money comes in from interests that expect a payback of some kind.

I cannot imagine the proverbial intimate exam of one's every single orphus, AND THAT OF THEIR FAMILIES, that has become acceptable in order to vet a presidential candidate. I have no doubt that many a very qualified, would-be leader has said, "No thanks!" at the very idea running just because nothing about them will be held sacred.

And I'm not even sure how that can be fixed in this advent of technology. Frankly, it scares the hell out of me.

Personally, I'm pretty passionate about politics. I find the state of our nation and my local government too important for me to not be informed, to not take time and thoughtfully consider the future for my own kids and grand kids, no matter how yucky it is and how stressful it can be.

So, I make sure I know. I teach my kids and we discuss current events nightly. I voice my thoughts, when asked, even if it means leaving people wishing they hadn't brought it up. And I am very, very wary of what is reported by the media. I don't believe 9/10 of what is reported and instead seek to read bills and what is actually passed into law and rely less and less on what someone else tells me; be it a news rag, the Internet, or political party. I'm to the point of where I really don't trust anyone but myself to form my political opinions.

That is such a sweet photo -- makes me smile -- broadly.

About the politics -- you voiced your opinions very well and without malice. I'm not sure I have figured out where I'm at this year politically, anyways. Or, maybe just in general! :)

I think your's is a party I could join and stay with.

I have but one political comment and its directed at all the Republicans - how is it your memory is so short you've forgotten under whose presidency the nation fell into this mess?

And lets not forget .. lets not ever forget who ignored the warnings that Al Queda was planning on using airplanes as weapons.

I love those placemats!

Hilary for President!!! (and I don't mean Ms. Clinton)

I quote your platform:
"I don't care what party wins, I just want world peace, an end to world hunger, and I want all dogs and cats to have a home, and someone to love them."

I would vote for you.

I don't agree at all but that's why this is America. See you at the polls and keep your change!

I agree with your political and religious point of view.
No one says it better than you.

Wow...well, I agree with you also, Hilary, politically and religiously too! And I love your little apprentice!!

Great minds think alike.........
Love those yellow mats.
And the baby - I'm hoping my gb will follow in MY footsteps and love crafting.
Martha

I could move in next door to you and love everything about it.
Thanks for YOU!

I did the same - registered as a Dem when I was 18 which means we both voted for George McGovern, right? I think that's who it was. And yeah, I'm still there. This whole Republican dog and pony show? Cripes!