Today I treated myself.   I bought myself a hand held flash.
I won't tell you that I know yet quite how to use it, but I am hopeful that I can learn.
Here is a picture of the cupboard by the back door, using the new flash. 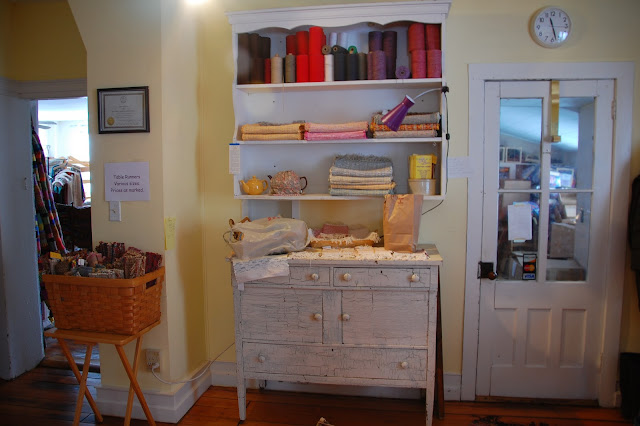 Here is a picture of the same cupboard, a few days ago, with just the regular flash on my camera.
There is a glare, and it looks harsh. 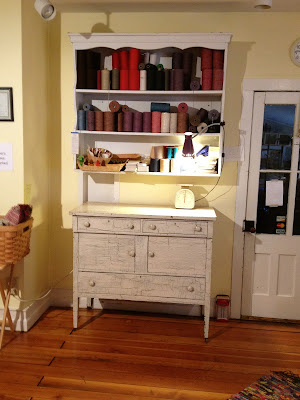 And here is the same cupboard with no flash at all. 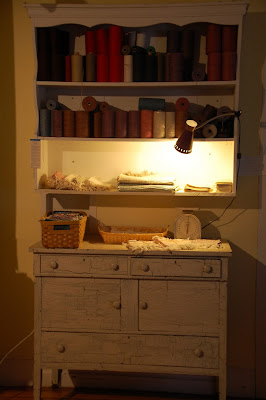 Then I was forced to admit that a SKUNK has totally screwed up production at Crazy as a Loom.
Yup, a skunk.  He lives under the barn, and he was apparently frightened enough to stink up the whole place.
Everything has to be moved out of the barn, a gargantuan task, and HE has to go.   Seriously.

Then I came home, and decided to make black bean soup.  Which went well.  At first.
It went well until I poured half of it in the food processor, to blend it, and it leaked out all over the counter.
Sputtering, I cleaned up the mess.  I washed the processor, and put it back together, and tried it again.
It leaked out all over the counter.
By this time, I was totally ticked off, skunk and all.
The soup was just FINE unblended, with some asiago bread that I bought from Panera, and a wedge of iceburg, chopped tomatoes, and blue cheese dressing.
And a glass of wine.
The Cuisinart is history.
That's the way I roll. 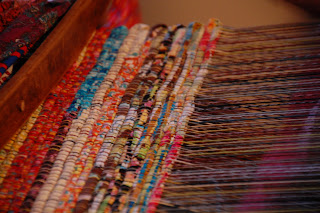 Sounds like quite the day. I had a bad one, too. Started out having to drive in freezing rain to feed stay-at-home cats for my clients. Ugh! Then took the dog out and my boots leaked and I was walking with wet socks in wet boots in snow. Ugh! Then tonight the beans on the stove over-heated and bubbled up and went all over the stove. Drat! I think I'll hit the sack early. You should too. Sorry to hear about the head-ache. Hugs, Deb

I would like to see your flash. I could help you out. Can you angle the flash? I would think the best thing would be to bounce the flash off the ceiling. You are going to have to learn to shoot in manual:) You will be so happy with the results.

Skunk smells are the absolute worst and so hard to get rid of. I have seen lots of them dead on the roads the past month or so...but not nearly as many as I'd like to see. What a day you had:-/

Have never owned a Cuisinart and never had the urge to buy one. Must be a better way to do the soup? Darn #10 headache. What's up with that? Do you suppose the stress of the skunk caused it? Stupid skunk definitely needs to find a new home!

Oh, no. Not the headache. And a skunk on top of it. That smell is so bad it can make you sick. I hope tomorrow goes a thousand times better for you than today.

ps - cool with the flash. I've never used one. Should be fun.

Today you were both.
Bummer!

I HATE that Cuisinart. Glad you threw it away.

The studio looks beautiful, though, calm, happy, serene - just about perfect in my book.

Hope the headache gets the message soon!

Skunk out in January....another symptom of a mild winter. Usually they go dormant and around here they start stinking up the place around the middle of March.

a flash that is part of the camera gets its readings/whether you need it or not from the camera - if you've set the flash for Auto. Using a hand-held flash you get a purer light and a more - whats the word I want - a more distributed (thats not the word but it sort of describes what I mean) light .. and of course w/o any additional light you get a darker photo ... me, I prefer no flash. But the hand-held seems to give off a nice 'natural' light .. stress likely made your neck tense and up the headache ante .. and I'm with you, toss the blender ..

Dead Cuisinart = sad. I've done that too. I've never really recovered from it.

My dad, being of Norwegian descent, has a joke about getting a a skunk out from underneath a small community hall where I grew up.

He says that the way they got the skunk out of there was to throw some Lutefisk under the building and that it stunk out the skunks.

The only problem after that was that then they couldn't get rid of the Norwegians.

ooh nooooo did the skunk scent any fabric???...now that would suck.

Love to just look at your work!!!!

What a day!
If you haven't already discovered this, there are skunk traps that really work. A friend has trapped and released over 15 from under her house over the past year.
It looks like a big round PVC pipe with typical trap doors on the ends. The diameter is just right so that they can't lift their tails to spray. Ingenious!!
Grace