Just one question.  Why would anyone plant juniper bushes all along your sidewalk, when they so distinctly smell of cat pee???
Am I missing something????
Every now and then, don’t you QUESTION the sense of things???
Seriously.
Like the woman in Stewart’s whose credit card was DECLINED when she tried to buy ONE pack of cigarettes.   For nearly $10.
Is it time to quit, folks? Huh?
Just wondering.
Of course it could be that I was already so annoyed, and that’s why I was bothered in the first place.
Or maybe some things are just so inherently dumb, that they can’t be avoided on any level.
I am trying to act normal, when I feel anything but normal.  I have never had a headache like this, not in my whole life.  I have done the right things, gone to my doctor, and then returned when things were no better.  Then I went to a specialist, when after 3 weeks, I had no relief.
But even though I was given some hope that there was a light at the end of the tunnel, yesterday  was the worst day yet.
So now, that got me wondering.  Is it something more serious?  Devious?   Worrisome?
Is it something that I will look back on as a real pain that resolved, or is this a life changer?
Hey, this might be one of those inherently dumb things that I can’t avoid.
I can't tell you how many days I have gone to the studio late, and come home early in the last month.  I have accomplished so little, that it is embarrassing.  Lois has pulled her weight, and 3/4 of mine.
I played a little with my loom at home, but not with any real passion.
You don't have what you don't have. Period. 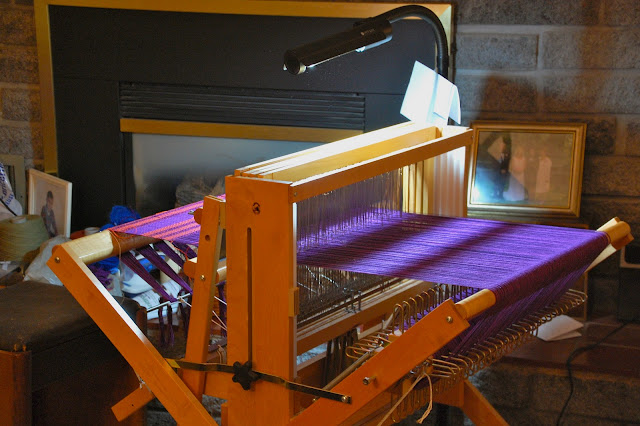 I managed to get this warp on it, with fewer mistakes than I expected.


Last night, I cried myself to sleep, the pain was unbelievable.  My daughter was bent on me going to the ER, but there is nothing more stubborn than an 'old nurse', unless it's an 'old doctor'.  That's the truth.  We make lousy patients.
The carrot  of "better by Monday" was dangled, and I was determined to give it a chance. 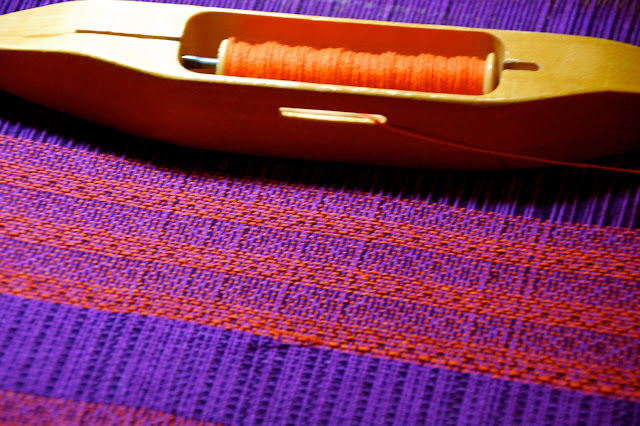 Then this morning, I woke up with a headache that was still there, but bearable.
I took the morning very slow.   I tiptoed.  I hoped.  I started my purple and orange dish towels.
I ate eggs and english muffins to cushion the prednisone.

After a while, I went to the studio, paid bills, finally got the birthday present to the birthday girl, had lunch.
Did you know that Prednisone makes you ravenous?
After lunch, I decided not to push my luck.  I came home, rested a bit, then took Roy for a walk.
The headache remained threatening, but not debilitating.
Yesterday began to recede in my memory, just a little.

Now it is 8pm, and the headache is staying put, not releasing me, but not bringing me to my knees.
Not today.
Let's weave a while.
Shall we Roy??? 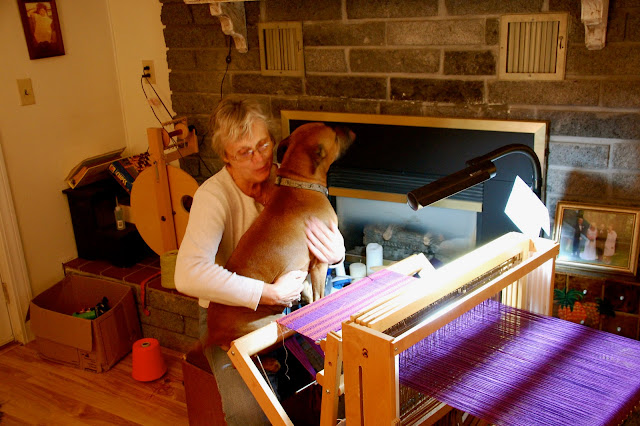 Oh Hilary! I cannot tell you how much I hope your headache will disappear any second. You HAVE done all the right things. I wish I could make it better for you. Please know that there are many of us sending good vibes your way. Hang in there....

So sorry for the pain you are experiencing,, not fun. Prayerfully it will go away soon and you will be back to good health and be able to function again.
Have a great day~ Ta ta for now from Iowa:)

Hi Hilary, I think of you often and I say a prayer each time for your pain to go away. I hope the doctors are able to find something to help you soon. Thank you for your blog. Your writing lets me know that I am not alone in some of my thoughts and feelings about things. We are different is alot of ways, but also very alike.
By the way...the bushes that smell like cat pee? We have those in PA...they are called boxwoods. So many colonial style houses here have them. We have alot of old farmhouses here...some from the 1700's and they all have those stinky bushes! We often remark about them. You made me laugh!

I've had migraines since I was eleven. I so hope that you get better.

I sincerely hope things improve for you soon.

Oh geez...Hilary...I certainly hope that they find out what is wrong and FIX IT!!! Meanwhile I am keeping you in my thoughts! xo

I don't know what to say. I can't believe you are still suffering with this head-ache. I have to give you lots of credit for even trying to proceed with your day. You are a real trooper. I'm so glad that lovely dog is there to keep you calm and comforted. Please headache.....go away!

I hope you get rid of that headache. You have had it way too long. Feel better and prayers going out for you.

I emphatically do not believe that things happen for a reason. However, I have noticed in my 40+ years of being a counselor that many times what happens to us does secondarily produce some beneficial change. I am hoping your headaches go away for good, and soon, Hilary. It seems so hard, and so debilitating. At the same time, I have seen you coming back often to the question of how to balance work and rest in your life. Your headache has made you rest. Who knows, this awful experience might ultimately give you insight into that balance question, and help you to be more at peace with that issue over time. Meantime, I'm going with the idea that today, being a little bit better than yesterday, is the first day of many days of feeling better still, each building on the other. xo

Would it be possible for you to stay away from your shop for a week...or even 3 days...away from the fabric dust,to see if your headache recedes? I am wondering if you have developed an allergy to some dye or fabric. Whenever my sinuses are out of whack I go out to the ocean. I live very close so it is easy. The sea air is very helpful. I am worried about you and hoping for a change toward the good very soon!

So sorry that you are still hurting. Pain sucks! I wish prednisone made me hungry. Unfortunatly it makes me mean. I always warn Kid the Younger (only one still at home sometimes) every time I get a prescription for it. Batten down the hatches, it's time for 'roid rage.

Keep getting better and take care of yourself. The weaving will wait.

Mike at Spindrift, ME said exactly what I was thinking. You've been promised some relief by Monday? Oh, Lord. I hope so, my friend.

Let's hold Monday as the day, I hope, I hope you are tons better.
When I was on prednisone I ate frozen berries. Slowed me down, but soothed my mind that I was truly not starving to death. Costco has a huge bag of mixed berries.
Be well.

Ugh! I'm going to offer another "maybe"... eye glass prescription? Sometimes I get headaches from working at a computer all day... then sunlight becomes unbearable. I honestly haven't ever known of anyone that had a chronic headache for this long... I do pray you get some relief soon! And yes, the prednisone will increase your appetite, make you hold water, and also make you jittery enough to not sleep well... so, let's hope the full length of this prescription works! Saline nose spray... that's another thing that helps me... dry sinuses hurt...

We have boxwoods here, and they do not smell of pee. I know the bush you are referring to, the odor is horrible!... We don't have them here at this old house.

Hilary, after a particularly horrendous time in our lives five years ago, I had a muscle tension headache that would not go away, for almost six months. I did everything you did (pred made me sick)... and finally was sent to a neurologist and had a dye injected MRI. Final diagnosis - Nothing ominous. Just muscle tension that got out of control. For that, you are doing the right things... exercise, eating right, calming yourself if that's necessary. The muscles at the back of the neck and head are responsible for those headaches and it's necessary to sooth them... heat, ice, whatever works for you. I was given a script for cyclobenzaprine which did help cut through it until things calmed down again.

Sorry you're still feeling so rotten...