How about a Walking on Sunshine table runner?   One of L's brain storms, when I wasn't looking.
I think it's a keeper though, don't you? 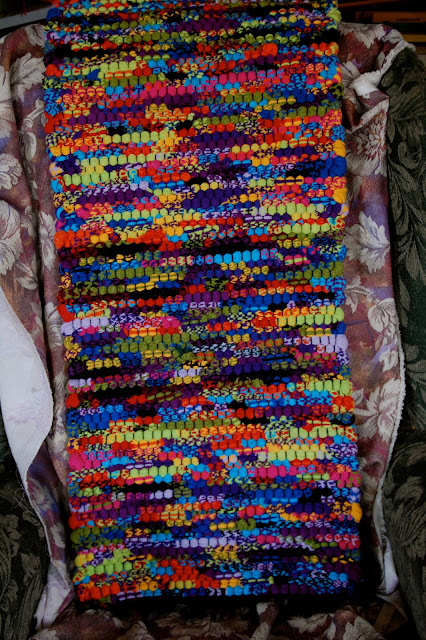 Speaking of brains, it was a rough weekend here in northeast NY.......I am amazed that my head is still on my shoulders.  It should have exploded by now.
I know you are all waiting for some resolution, and I wish I had one to tell you about.
I don't.
What I do have is a clue, and a little information, and I will share that with you.
My MRI showed that I have a Chiari Malformation.  What that means is this:
Normally the cerebellum and parts of the brain stem sit in an indented space at the lower rear of the skull, above the foramen magnum ( a funnel-like opening to the spinal canal).  When part of the cerebellum is located below the foramen magnum, in other words, it is pushed downward into the foramen magnum and the upper spinal canal, it is called a Chiari malformation.
Some people are born with it.
Adults can come up with it for various reasons.
I did a little google search, and found this.
While it has long been known that whiplash can cause injuries to the cervical spine, a new study published in the July issue of the journal Brain Injury, ("Chiari and Whiplash Injury," co-authored by Ezriel E. Kornel, M.D. F.A.C.S., Michael D. Freeman, Ph.D., and others) shows that whiplash may also cause anatomical changes that can result in brain injury.
The study, one of the few to look at the connection between whiplash and brain injury, examined the MRI scans of 1200 neck pain patients and found that those patients suffering from whiplash were more likely to have anatomical changes to the brain resulting in brain injury, specifically, a herniation of the brain called Chiari malformation, in which the bottom part of the brain (the cerebellum) dips through an opening in the base of the skull after a whiplash injury. Preliminary findings showed that brain injury occurred in 23% of the whiplash cases studied.
According to Dr. Kornel, a principal with Brain & Spine Surgeons of New York in White Plains, N.Y., "This condition can be quite painful and endanger the patient's health, with symptoms that may include headaches, neck pain, upper extremity numbness and tingling, and weakness.
Bottom line, I guess I didn't get away with that flip in the air, and that crack to the back of my head, back in August.    Now I need to get in to see a neurologist, to find out what to do about it, and to find out if, in fact, this is the cause of my headaches.
It sure sounds like it to me.
I am trying to concentrate on what is right in front of me, and take this a step at a time.
Carefully.

Sounds as though you are right on target with your diagnosis. Let's hope the doctors agree and offer a remedy or come up with their own diagnosis that makes sense. Ya, you whacked yourself pretty good on the noggin. Let's hope this is fixable or treatable to give you some long needed relief!

Wow. Hilary. Geesh. I'm praying for ya! I will keep sending healing thoughts and hopes that you will find the absolute answer and then find the solution. Amazing it took this long from when you fell, to a month ago, for this to start showing signs. I hope you get the best doctor and get answers. (((HUGS))) Keep looking at those sunshine table mats, chair mats, and rugs....they gotta bring you some hope.
I had some really bad falls from horses, and I whacked my head more than once. I was having a lot of trouble with my shoulder and neck, and I had an MRI done and was told I had badly herniated disks in my neck, and that at any point, with the wrong move, I could be paralyzed. I got some traction done, and some phys therapy (which didn't seem to help at all. I was really depressed, till I moved to a new area and decided to have it all looked at again....went to a neuro and he said, nope. Nothing more wrong with your neck than there is with 90% of Americans out there...you're neck isn't the issue......so this may not have anything to do with you, but hey, I thought I'd share...ya never know. Maybe get more than one opinion. More (((HUGS))).
Martha

You are one step closer to feeling better so that's a good thing. Are you able to function on some strong pain meds? They knock me right out but some people find them easier to tolerate than the nagging pain.

Having a name for your monster is a good start. Hope a good game plan and relief is coming next! (On a side note, my daughter was born with a Chiari malformation...)

L is a genius.

I hope that the diagnosis helps to speed up the cure....I REALLY hope that you wake up one mornig with the headache magically GONE.

How about craniosacral therapy?

You are the FOURTH person I know to have this. They all have had surgery for it and have done very well.

Wow. I shall be thinking the best thoughts for you.

I so very much hope that this is the beginning of the end for that dang headache. I have been on pins and needles to read your post...I wanted good news! This looks like it's headed in the right direction...you nailed it.
L is a genius...love the table runner!
Continuing the healing prayers for you!

I've never heard of this. Is it something that your chiro can help with .. knowing what it is.. or does it require more invasive treatment?

I am so sorry. At least now you know what it is.

Never heard of it either. Hoping the neuro can give you solutions and rid you of the pain.

Oh Hilary...am so sorry. I am familiar w/ chiari malformations and ask you to please talk with the dr. before more chiropractic care on this.

Interesting you started the post with one kind of brain storm, though you have been living with another kind of brainstorm for awhile.

OUCH .. I second Valerie's comment ... do not go to the chiro til you see a doctor .. sometimes manipulations can cause more trouble (and I totally believe in chiropractic).

As a teeniebopper I had a C-5 injury (body surfing) but it was not until in my 40s that I had trouble. I received a giant bear hug from a friend and something in my necked "snapped". Dr. said I had a smooshed C-5 and blood vessels were terribly bruised. I was advised not to have chiro because a large spur was there. I did have traction and phys therapy (that lovely zapper machine that makes you feel like warm jello). Both helped greatly, at that time it was in vogue to wear a cervical collar. It took time but I got 100% better. Hang in there. Happy you are moving to the next step. GL {{{{{a gentle hug}}}}

So, if you stand on your head for the next five months, with the brain thingy go back to it's original place and be as good as new? ;-)

I too, wondered about a chiro. It can't hurt to call one and give them the info and ask his or her opinion. An adjustment may very well help. I know I would explore it before the neuro if I was having pain.

I'm glad progress in the *knowing*department has been made.

Oh geez, Hilary...certainly sounds like that is what it is...I'm hoping that they can help you with your pain...when do you see the neuro?? And I hope they are giving you some good pain meds! We are all still thinking of you and sending you healing hugs!

Everything will be ok, Hilary. Now that you have found out what is causing the pain, it can be addressed and healed. Yes, it's a bit scary, but you are one of the bravest people I know. You may not think you are, but girl - you are.