As you know, I have had some relief from the headaches for about a week, since I started back with the chiropractor. They were present, dull, low key, but not debilitating.  That is, until last night.

It hit about 8pm, and eventually became the worst headache of all.   Advil did not touch it, nor did the heating pad on my neck, the hot tub, or sleep.
In fact, sleep was sketchy, the pain kept waking me up.
So as soon as the doctor's office opened, I was on the phone.  They took me in mid morning.
I figured it was time to go BACK to my regular doctor, and say, HEY.  We need to get to the bottom of this.  It ain't right.
So he sent me off to the hospital for lab work, testing all kinds of stuff, including lyme disease, rheumatoid arthritis, and lupus.  And he is working hard to schedule an MRI.  Unfortunately, it isn't easy to do the day before Thanksgiving, but if it doesn't happen today, it said he would shoot for Friday.
He also gave me a prescription for Fioricet, which though addictive, is usually good for headaches.
KEY WORD. USUALLY.
I might as well have taken an M & M.  In fact, I would have rather.
It didn't touch this screaming, pounding, monster behind my eyes.
After a few restless hours on the couch, I gave up.
Even though I had a nurse.

He stayed like this, with his head buried under my arm, for 2 hours. 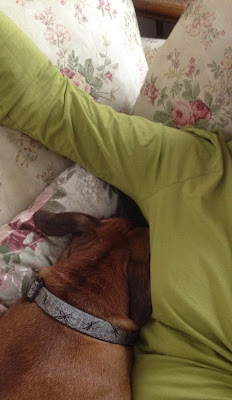 Until I decided that I would make pies, since my head was about to burst anyway, how could it hurt.  If I could get through it, I would.
And in fact, I think it took my mind off it for a little bit.  Once I got into the process I knew I could get them done:  an apple pie, a pumpkin, a chocolate cream, all ordered specifically by one family member or another.
So one way or another, we are going to get to the bottom of this pain, sooner than later I hope.

In the meantime, I wish you all a Happy Thanksgiving.
I'll keep you posted.

Geeeeeze, H. This has to stop. I hate this for you. Please keep us posted and in the mean time try to have a good Thanksgiving. Poor you.

Oh that is not good. I hope you get your answers soon and are able to put this behind you.

Oh boy, not good at all, Hilary. I, too, hope you get your answers soon and get fixed soon as well! Keeping you in my healing thoughts!

I'm praying for you Hilary. This is too much. Try to have a good day tomorrow. Ours is behind us but I wish you a Happy Thanksgiving. Hugs, Deb

That sucks. If the mri doesn't turn up anything, I think there are actually medical groups that specialize in tracking down the cause of headaches. If there's a medical school near you they might know of who to see.

Are they going to look at the upper spine as well, so as it not miss damage there?

oh Hilary - I was hoping you were done with it. Sure hope you find some relief very soon and an answer as to what's causing it. An easy no big deal answer.

Making three pies when you have a screaming headache? I give you more than a little credit.

Have you tried massage? It might not help, depending on what you have, but it couldn't hurt either and it would feel good.
Have a wonderful Thanksgiving, and I hope your headache takes a little snooze while you visit.

p.s. I found Excedrin better than Advil for headaches. When I was in college I tried every pain killer in the pharmacy for headaches and Excedrin was most effective for me, maybe it varies for someone else. Now when I have a migraine, if I get in there early with two Extra Strength Excedrin and Imitrex nasal spray, that almost always helps quite a bit.

I'm so sorry to hear of the headache's return and hope the MRI helps to point your Drs in the right direction.

As a migraine sufferer myself, I have full empathy for your situation. The longest I ever dealt with one though was 8 days.

I hope they get to the bottom of this *soon*

Hi Hilary Sorry about the headache return. Praying for you to resolve the problem. Love my rugs. Happy Thanksgiving! Blessings Mary

I am so so sorry. I get headaches terribly off and on too. Migraines and tension headaches too. When they get that bad the only thing to do is go into the doctor and get a shot. The shot works for me. I hope they find a solution for you as well.

Thanks for swinging by my blog yesterday. If you happen to be one of the people who decided to follow yesterday, can you let me know? My GFC box isn't working right - I can't see new followers - and I always like to try to follow back!

I'm so sorry. Pain sucks, and it can take over your life way too easily. Hope you find solutions soon.

My, my this has gone on too long! I hope that something comes of all the tests and that you get that MRI soon, so we can all breathe a sigh of relief for your relief!
Happy Thanksgiving to you and your family!

I am thinking stress adds to whatever is wrong ..maybe pinched something that gets more pinched when your body reacts to stress .. what stress you ask .. well for one thing kicking yourself over and over about that crap fair .

I hope your head stops hurting.

It's so comforting when your best pup friend snuggles next to you. They know when we need the closeness.