Escape. To the kitchen.

Last night, while in a funk, I decided to cook.  I recently bought a cookbook that I have been dying to play with. 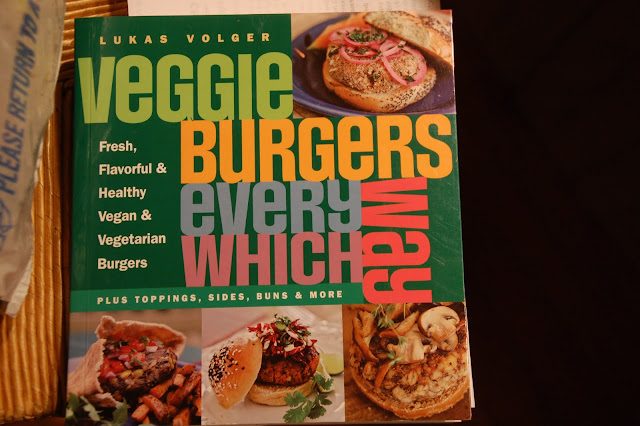 I am not fond of the veggie burgers sold in the supermarket.
So.........I made Sweet Potato veggie burgers with kale and lentils. Cilantro, garlic, curry, onion........oh, my.
The kitchen smelled wonderful.  And I made a huge mess, so I was doing dishes quite late.
Now I have seven of these burgers, one of which I will eat soon, and the rest I will keep/freeze for later, since I am the only one in the house who will eat them.
This book has so many recipes I want to try.   I just had to start somewhere.

Do you ever have those days when you want to run away???
Do you think anyone would believe that you would ever do it?
Would  you ever do it?
Can you imagine moving somewhere, to another state?   By yourself?  Starting your life over again, as if your old life had simply disappeared?
Tell me, do you EVER imagine that??????

Well, today was back to reality.  Getting the studio ready for the OPEN HOUSE.
Summer Harvest Festival whatever it's called.
So first off, I cleaned the porch, cause it was needing it, and that's where people come in, so it should look spiffy. 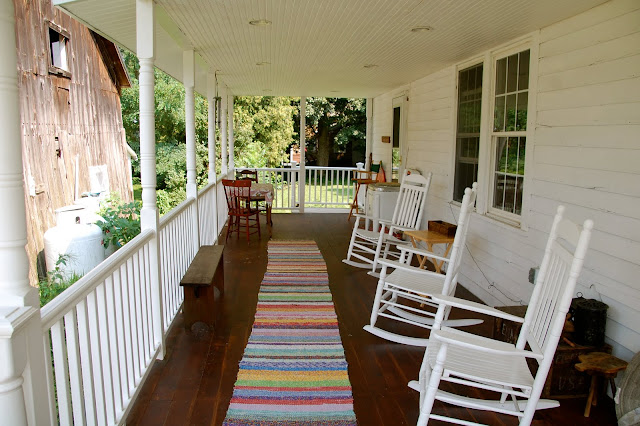 And the back yard "dye mess" was next on my list.........all picked up, and stored neatly behind the shed.
For next time. 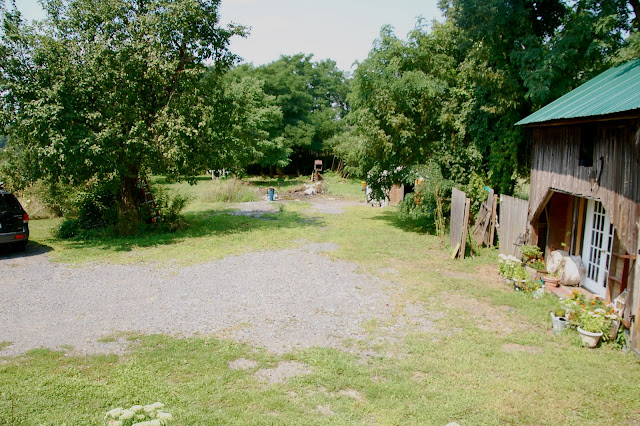 Inside, Lois and I both put stuff away, and  organized.......an ongoing event I'm afraid.  Then she vacuumed.
Busy morning, but the place looks really good, if I do say so myself.
And I do.
These are the sunflowers that my granddaughter and I planted several weeks ago. 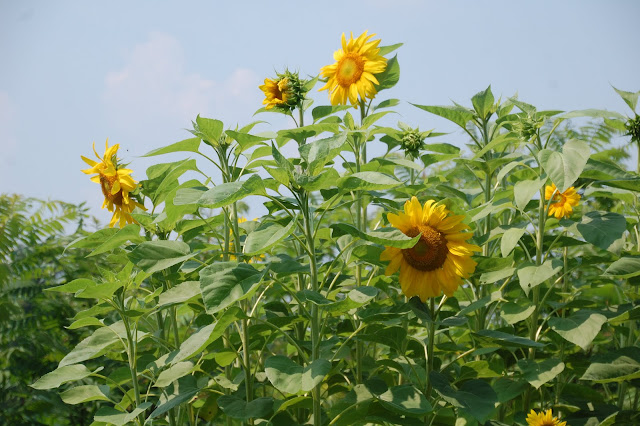 They are easily 10 feet tall.

She will be pleased. 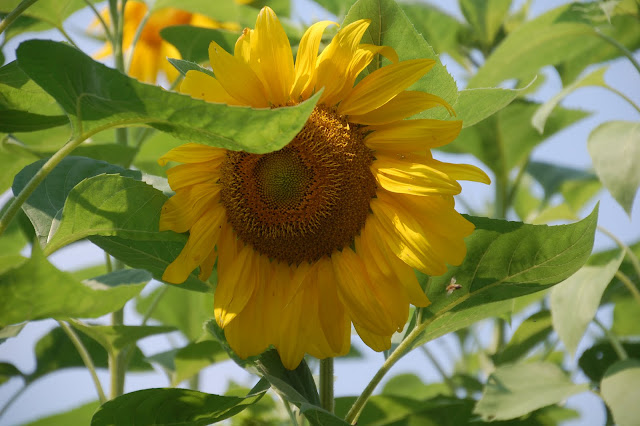 When I was very young and my first child was a babe, my mother's best friend just got up and left.
She packed her bags, and took off with a friend of hers, for parts unknown.   I think they went somewhere out west.  Everyone was horrified.  It was so unlike her, they said.
Apparently not, I thought.  Apparently it was EXACTLY like her.  Just not like the part of her that everyone was familiar with.
She was gone a year, maybe longer.
And when she came back one day just as unexpectedly, her husband acted to the world like she had just been gone on vacation.
The rhythm of their life picked up right where they left it.
She lived there with him for the rest of her life.
But I always wondered about that time.   What was she thinking? How did she feel?  Did it make her happy?  What made her come back? 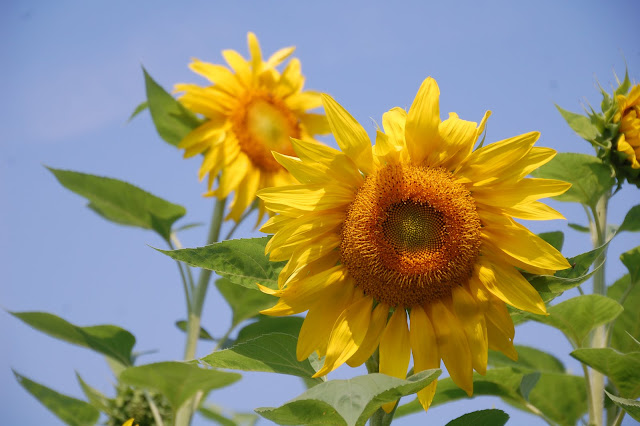 Then there's the possibility that if you ran away, you would miss all the things in your life that drive you crazy.
Or would you?  Could you???? 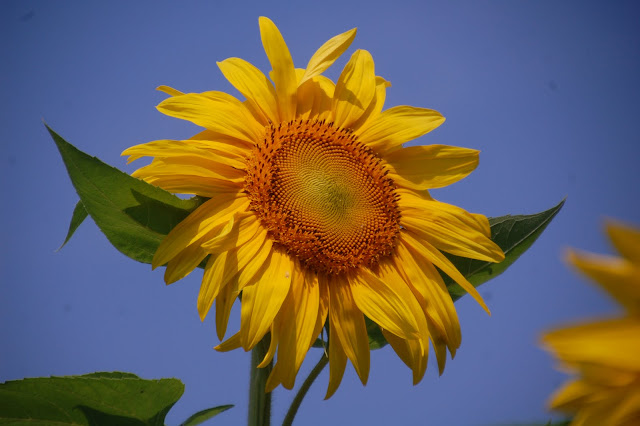 Maybe when we get to run away is at the end of our lives. Then we really get to let it all go, and not worry about any of it, and have NO responsibilities, and don't have to listen to anything mean or unkind, or disturbing.   Then, and only then, are we allowed to NOT GIVE A DAMN, and nothing, nothing hurts our feelings, or makes us feel bad.
At the end of our time here. 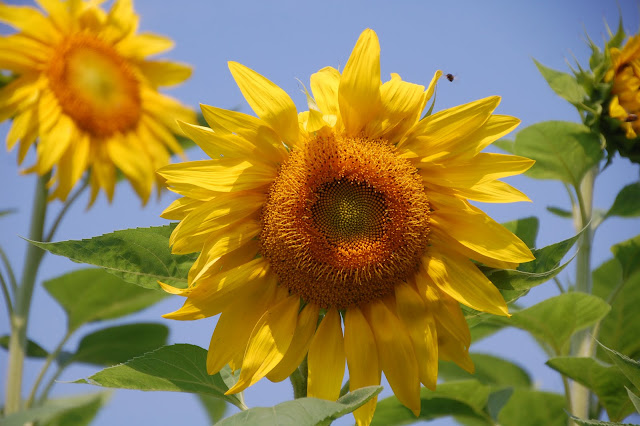 I don't know about you, but I'd just as soon run away, and not wait for that.
Just sayin'.

When I retire from teaching in another 8 years I will be running back to New England, somewhere, to live. I've lived in the mid-west for over 20 yrs and as I get older, I'm mid-fifties, my heart yearns to be where it is most at home, New England. I would give all I have here, now, in a heart beat to live where I grew up. I am a New England girl through and through!

I often think about the decisions I made and the time I made them and wonder what would have happened if I had thought different at that time. Sometimes I would love to have the opportunity to go back and relive moments but make different decisions and then live with that life for awhile. I guess that is a little like running away from this life so, Yep....I have thought of it. I hope you are ok. Life can be so challenging sometimes and you can just get tired of it all. I know you are a very spiritual and deep-thinking person so I say it may be time to take some time for Hilary.

Sounds like it's time for e trip to Maine!

"No matter where you go, there you are." Thank you Yogi Berra!

....if I knew then what i know now.....things might be different. We're bound by our own conventions and limited life choices. It's difficult to say whether or not running away from one's present life would result in anything markedly different. (That sounds just freaking awful and boo-hoo-ish, doesn't it???)

BUT on the other hand, my mother started life over several times...she was a free spirit and a brave soul. And she really just didn't give a damn about what others thought of her.

Chin up Hilary! Is it time to free yourself of some unnecessary stuff?

Well, I kind of did that when I was much much younger. Sure pissed HIS family off... but it was better than staying in a marriage with an alcoholic. Love my life now. I think there was a time when people could just run away and never be found or heard from again. Too many things get in the way of doing that in these times of bank cards, credit cards, computers... everything we do is tracked... Not that I'm thinking about leaving mind you. LOL

Are you feeing weighted down?

I did that running away stuff when I was in my twenties. Loved it! I didn't appreciate it then though. Now I would!
I did run away from my kids one day, because they were being absolutely sassy! I was gone all of fifteen, twenty minutes and couldn't stand it anymore.
I think if I ran away now I would just be lonely. As much as I say I love being by myself, I think it's only the thought of being by myself that is true. I like someone here to talk to.

Those sunflowers are awesome, and the photography just beautiful. Thank you for sharing with us.
I don't think I could run away, because I'm the one I'd be running from. Besides, I'd miss my grand baby waaaayyyy too much.....so I'd have to take her with me! :-)

Your porch is just so perfect and welcoming. It would certainly draw me in.

As for running away, I've done it already and just recently returned home. I'm happy being home.

I tried seriously running away twice when I was younger. First time, the clutch in my car broke and I ran back home crying. My dear sweet husband handed me his keys and said, "take my car". I did and came back in a couple of hours.

Second time I was very angry at my husband and son so left and drove around for 2 hours in the country near our home. I had to pee so bad I had to return home because anyplace I could have squatted in the country was the driveway of someone I knew!

Now, I run away in my head or I change the way things are. Each time I get real serious about "moving to another place" I look around and wonder how on earth would I be able to take my loom and my spinning wheel and drum carder, so I stay home!

I do think your porch is spiffy and those sunflowers are just incredible.. as is your photography. You're right about your mother's friend.. that was her. But I have to wonder if there were things about the husband that others didn't know. Whatever it was.. whomever it was.. they worked it out. Life is strange and not to be taken TOO seriously.

I run away a day at a time, whenever things get too overwhelming. I'll get in the car and go, either by myself or with a friend (depending on my mood). I do whatever I want to do, and go where I want to go, without consulting the committee for a decision. By the end of the day, after I'm re-centered and ready to return to being 'myself', I go home and life continues ... until the next time.

Yep... I've thought about running away... except there would be ONE person I would miss horribly... and I haven't yet convinced that person that running away is a good idea... still tryin' though! lol! Your open house should be very enjoyable!

Hartwood Roses has a great idea though... I may try that...

Ha! Beautiful sunflowers! In my 40's, toward the end of single parenting two teenagers, I had a fantasy about a restaurant I saw on a lost highway. It was the Bluebird Cafe and had an apartment above the cafe. I imagined walking away from my life and becoming a waitress in that little cafe. I would live in the light breezy apartment above and be a different person...maybe have an affair with some local potter, become a surfer and mountain climber, wear hiking boots and short skirts to work, buy beer from the local brewery with my tips, and write fantastic short stories and poetry. Another lifetime maybe...this one is too good to walk away from.

Both DH and I would love to just leave here. Move to Maine or Vermont. Just...LEAVE.... but, we can't right now...too many obligations...just the reason we want to go...and we can't. So, we go on vacation there as much as we can. And we dream.

I have been tempted so many times--just not sure where to go and how to pay for it! Just a vacation would help I'm sure, but haven't had one this year!