Checking in with Roy.

A little rain out there, and Roy is giving me the LOOK. 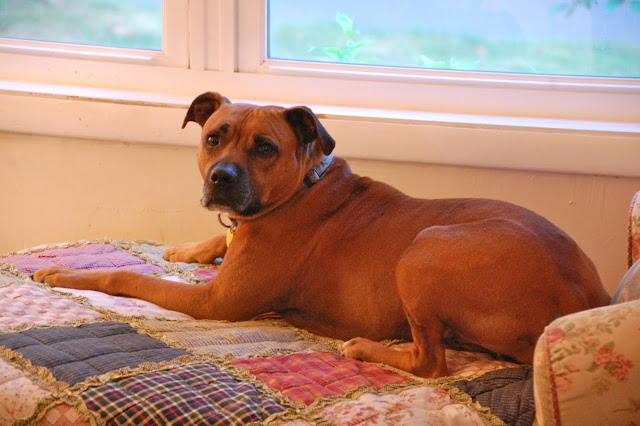 I will never forget my Eddie.  He was a prince.
But the more you get to know Roy, the more you realize how 'high maintenance' my sweet little Edward was.
Eddie would go out in the back yard for his last trip of the night, and bark.  While you waited at the door, swearing under your breath, wondering if the neighbors were calling the cops, he would bark, and when he could hear he would ignore your calls, and as he got older, he had an excuse.  He couldn't hear you.  When he tired of barking at the moon, he would come up on the porch, and bark in a LOUD and OBNOXIOUS way, because he wanted to come in AT ONCE.

Roy goes out, and never, ever barks.  When he is ready to come in, he comes up on the porch, and sits quietly outside the door waiting for you to let him in.

Eddie begged at the table, and every other place that food appeared.  And due to his sensitive tummy, he was fed baked chicken breast, with his regular food, every night.

Roy doesn't beg, ever.  He eats Nutri Source chicken flavor dry dog food, and he isn't much on table food.

Eddie never bit anyone in his entire 14 and a half year life.......but he was wicked jealous of kids, and so when they were around, he vied for your attention.  This, of course, made every one a little nervous, so we watched his every move, and DID pay more attention to him sometimes.
Roy LOVES everyone, and is happy to sit on whoever's lap is available, and be petted by whoever is inclined.  He doesn't have a jealous bone in his whole body.

He loves Eddie's white polar bear with the red hat.  Even though DH brought him a brand new toy, he really prefers the bear, well chewed by Eddie already.
Roy, like Eddie, has a big heart, and has easily captured ours.
Did someone say we were fostering Roy?
Yeah, right.
Try, just try, to get him away from us now.

Hope he's not waiting for you to sign the adoption papers to turn into the 'tasmanian devil'. Ha ha!

Just look at those eyes!

He is so deserving of a great home and so much love. I'm always touched when you talk about him.

When he becomes a 2-legger in his next incarnation, I'll marry him. I'm in love with him already! :D

I believe Roy knows a good thing and is counting his blessings. Roy is a poster dog for "rescues"

We lost our old man Connor last September at age 13 1/2. He rushed and barked at anyone at the door, any other dog in the neighbourhood he could hear, he had selective hearing (if you know what I mean) for most of his life until he really lost his hearing.
He had tummy issues too and ate chicken every night just like your Eddie.
We just adapted and adjusted to him and his quirks...
We've had Calli 6 going on 7 months now and boy, what a difference! She hardly ever barks, never rushes the door (sits and waits no less!) is affectionate (Connor was aloof). We have come to learn just how difficult Connor was by how great it is with Calli. She has a tummy issue though so we're still doing chicken but there's also a special kibble she's good with so its not so bad.

We both have suffered a great loss and then the joy followed once more... great huh?

One of my current dogs was adopted from a rescue at about a year and a half, it was probably a year before I heard him bark and he still seldom if ever barks at anything. When he does it's not long or loud.

I have an Eddie. His name is Buster and he's only five. We have a long ways to go and I hope he settles down one of these years.

I have a friend who says that our animals leave us when they know that another one is coming that needs us more ... and that they leave the door open for them on their way out. I believe that our pets are chosen for us, if we have the faith to listen to the little voice in our gut who introduces us to them. What a wonderful match Roy is!!! I can hear the love in your words, and you make us love him too.

Okay...I have fallen HARD for Roy...just Sayin'...those perky ears get me every time!

I love happy endings like this. Roy is one lucky Dude, and you so deserve a wonderful dog like him. Perfect. This is why I cringe when people put down pits. They can be the most awesome dog..Roy is the proof.

I'm so glad Roy has come into your life. I think the timing was perfect for both of you.

Roy is the boy of my heart. He knows he has a good thing going, that is one smart cookie. Love you to both

What a wonderful wonderful post! Roy is such a sweatheart and lucky to have found you!

He has the sweetest eyes. A friend told me that dogs only live short lives compared to humans because there are lots of dogs that need homes so we get to take care of many in our life time. Eddie was lucky and now Roy is the lucky one!