I must have meant I wanted to BE simple.
That MUST have been it.


Yesterday, my daughter and two of my grandchildren, and I, went on a little day trip.  I had worked at the studio all morning, and she had taken my grandson to get his braces.  So we all needed a little R & R.
I told her I would take them to this great place, on Lake George, called Shelving Rock.
In 1902, George Knapp, co-founder of the Union Carbide Corporation, built his estate on a ledge of Shelving Rock overlooking the lake.
By 1941, New York State had acquired 4300 acres of the Knapp estate, and it became public land.
There are old carriage roads all along the shoreline, and up into the woods.  This is where we were headed.  The lake is shallow here, so boats moor here, for the swimming.

There is nothing more calming, than a stroll through the woods.

So take a walk with me, and see how sweet the Adirondacks are, on a cool summer day.  You'll need this sense of peace and quiet, for the end of my story. 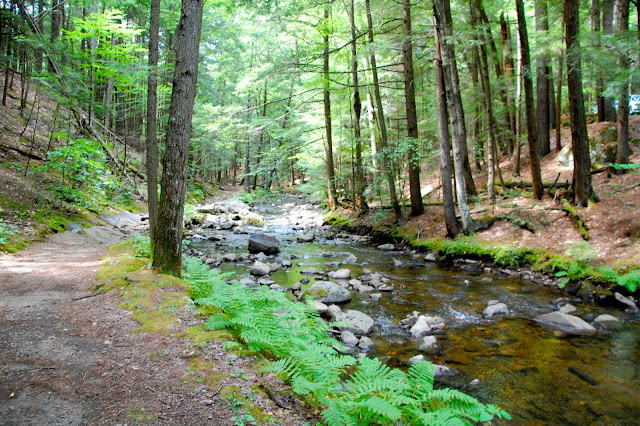 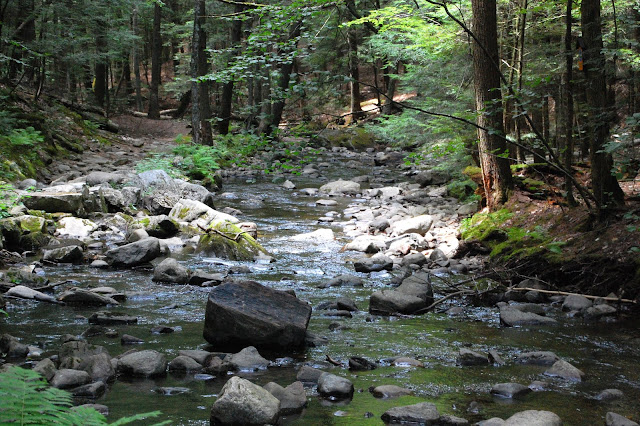 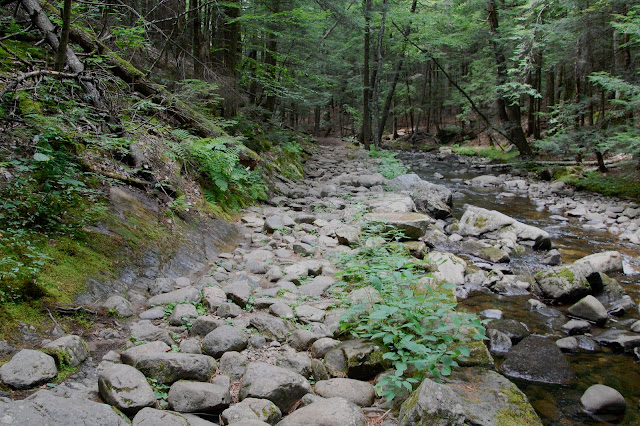 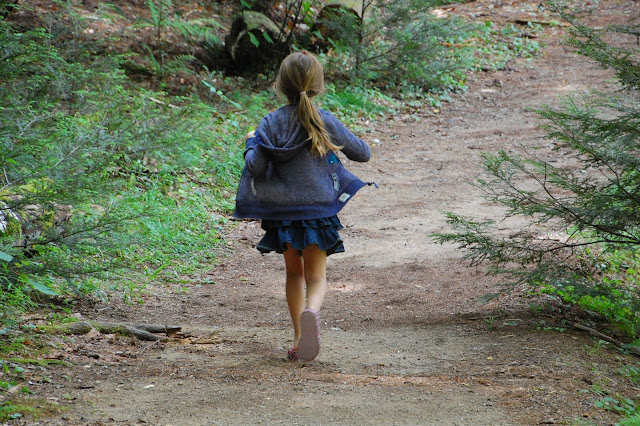 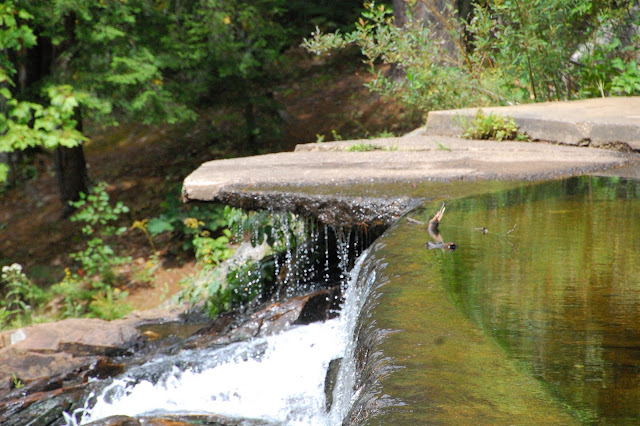 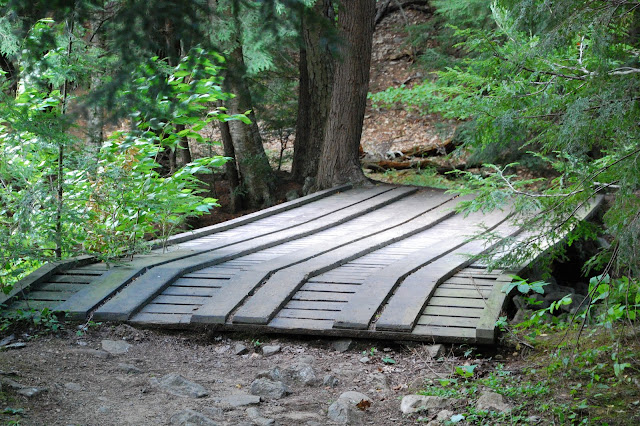 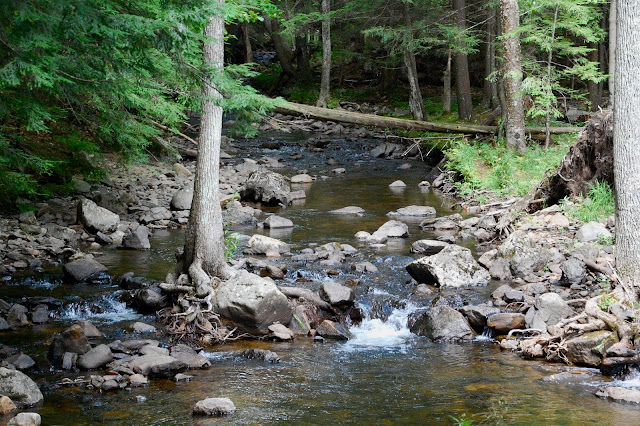 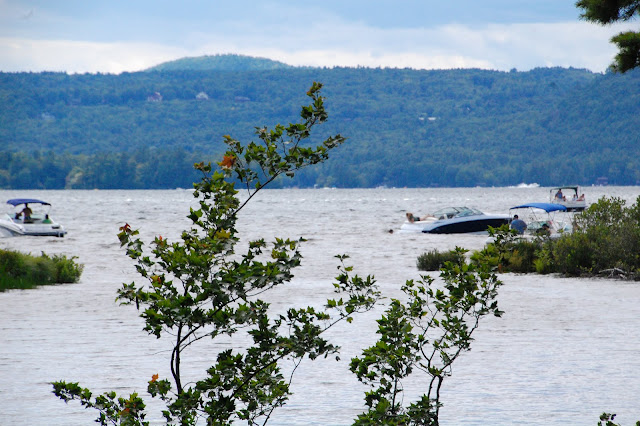 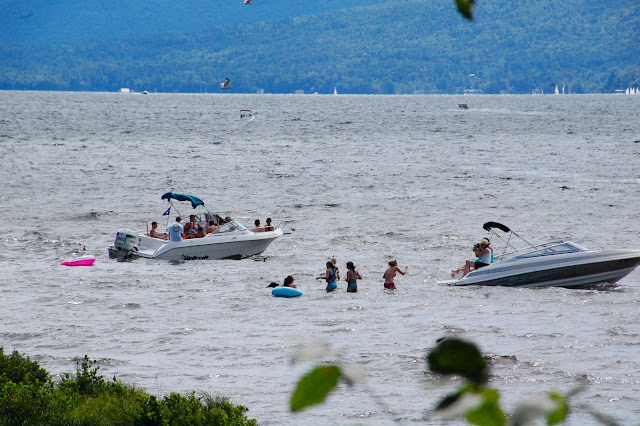 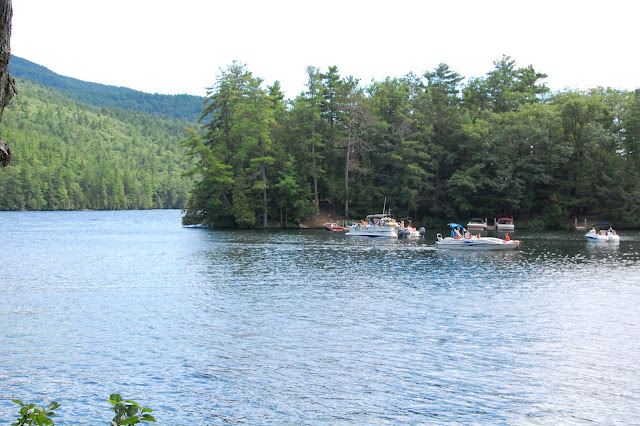 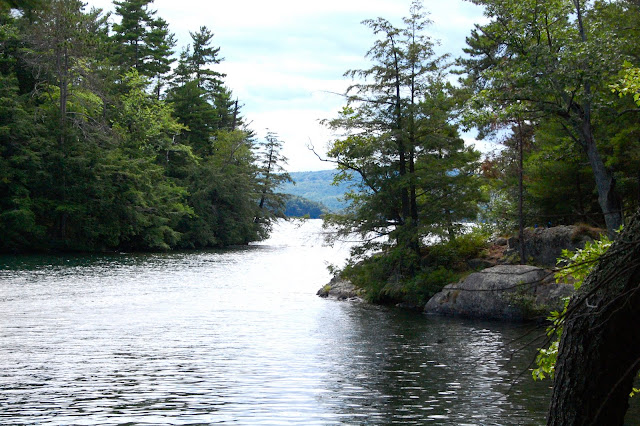 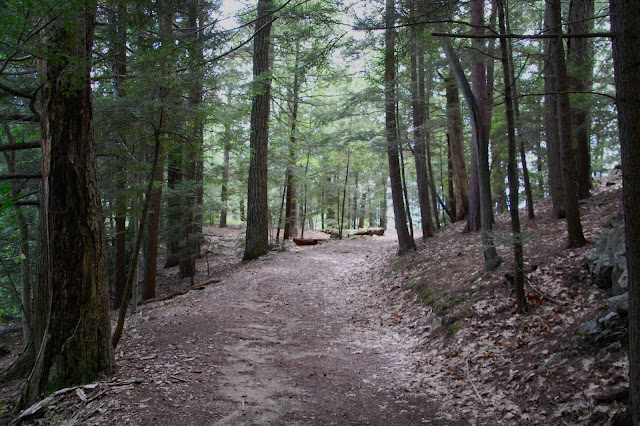 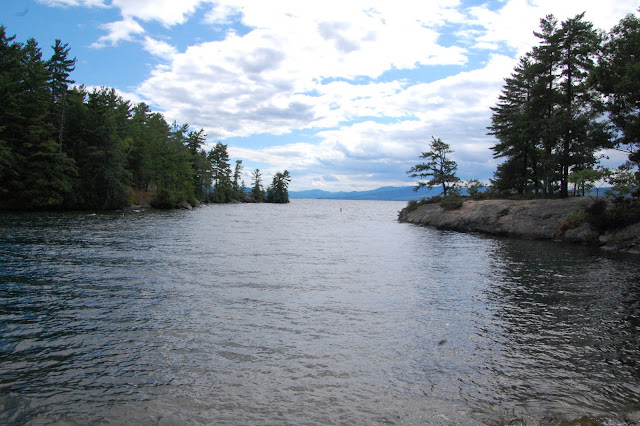 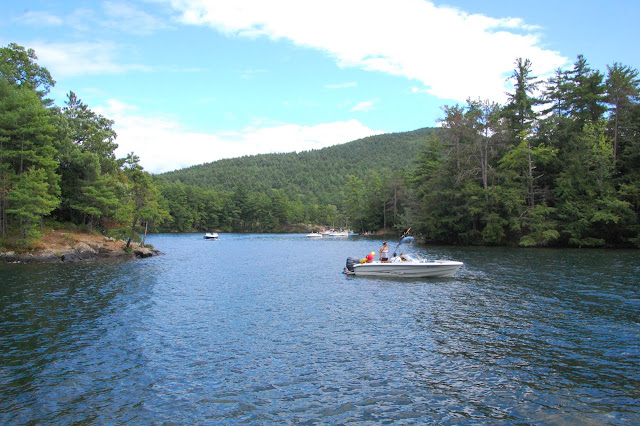 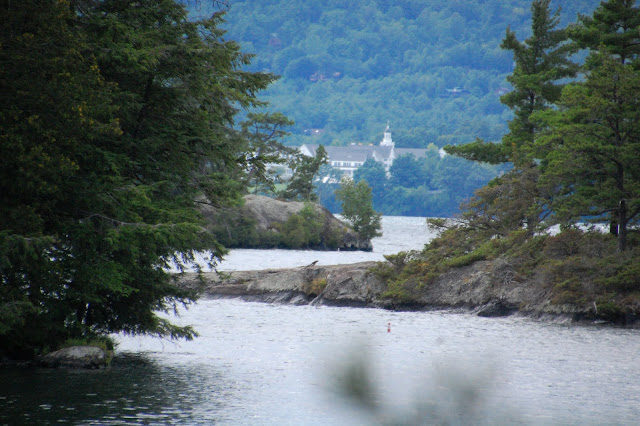 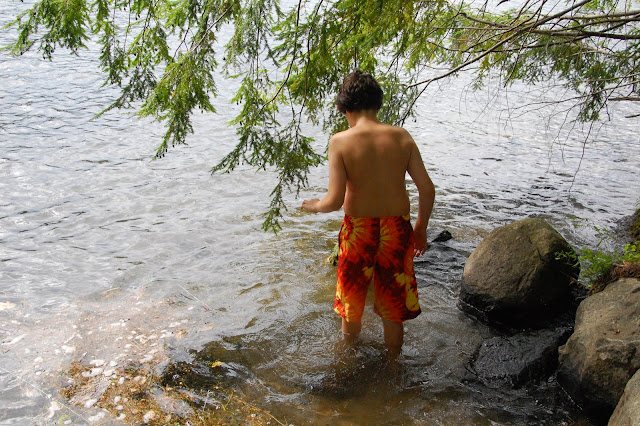 And this is where the serenity of this day comes to a screeching halt.  After I snapped this picture, I took my camera off my neck, folded my towel up, and set the camera on the towel, away from the water.  I then took ONE fateful step into the water.  It looked like sand.  But apparently, there was slippery rock underneath.  I only remember the world turning upside down, my back slamming down on the flat rock, my head snapping back and the pain of my head hitting the rock harder than I would have imagined possible.   The rest is a blur.   Blood running down my back, down my arm, being wet, and dirty, and very shaky.
Somehow, my daughter got me to my feet, to give her credit.....against her wishes.  She wanted to hail down a boat, to take me across the lake.
But NOOOOO, not me.  I said we walk out.
She was hesitant, but I was determined.  We walked slow.  She told me afterwards, that I was a bit 'confused', not exactly myself.  I don't really remember.  I do know that though it took us 2 hours of walking to get where we were, she picked the path that was only 15 minutes from the road, where I sat on a rock with the kids, while she jogged back out to get the car.
While we waited, me trying to stay conscious, Ava said...........
"I didn't know that was going to happen."
And I remember saying something about when accidents happen, they are usually a surprise........well, always really.
She said, " I like surprises, but I like the ones that come with presents, not surprises like THIS."
I shakily concurred.
Daughter arrives with car, and we drive the 12 miles or so out of the woods, and then another 15 minutes to the Emergency Room.

Where they promptly slapped a cervical collar on me.
Let me just say that I have never had such a headache as that one.

Five hours later, DH and I left the ER.   All xrays negative.  C spine cleared (thank God) and elbow sutured up.  A little concussion.  Nothing that will kill me.
Came home, ate  and went to bed. Exhausted, in pain, hazy still.
So much for simple.
Ava said, " I hate days like this."
Ha!!!
Today, I didn't do so much.........one thing I was sure to do, and that was to BE GRATEFUL.
It could have been so much worse.
My daughter called this morning, and I heard my husband say......she's out looking for the truck.....?????
Then he added, " The truck that ran her over."
Funny guy, he is.

See what happens when you relax instead of work?! I'm just kidding, of course -- I am so sorry that your beautiful day ended that way and I hope you're feeling much better soon. Is it a waste of time to tell you to rest up?!

Oh Hilary. I feel for ya. That had to hurt beyond description. I expect that you are in even more pain today so please take it easy and let DH take care of you for a day or two. I fell not long ago (1 wk before son's wedding) and broke a rib. I felt worse the next day. Maybe let the joker take the dog for his walk tonight. Hugs, Deb=^..^=x4

Oh my, hope you are feeling better soon. Life is certainly a roller coaster ride.

Ohmigoodness, that sounds like an awful fall! Please take care of yourself and rest up and get well before you go back to being your busy self! All the weft you prepped the other day is waiting for you to get well. :)

Oh God! How terrible Hilary and just when you were having fun. Bless Ava's heart. I am so glad you are alright.

The photos are beautiful though. Everything looks so serene and peaceful, even with the boaters around.

OMG. OUCH! Yikes......I got goosebumps when you explained what happened. I have had my share of falls (off galloping horses, off the bed of a truck, down cement and wooden stairs....). It HURTS.
I'm glad you're ok - well as far as no real damage being done.
Take care, rest, and feel better.
((((HUGS))))
Martha
Oh yeah, your hubby is a hoot. lol

Oh thank God you are alright...well, relatively all right. Yes, it could have been worse and I am so happy to hear that it wasn't.
Take it easy girlfriend!
Thanks for the great calming pictures before. When you said you set your camera down and made sure it was safe I thought you were going to tell us it went swimming!

Oh my goodness, I'm so glad you are okay. Funny guy, your husband :)

I fell on the ice last winter and this was such a huge reminder of how that felt. One minute your foot is on the ground and the next it's not. Hope you heal quickly.

Lovely. Just came back from a NH lake vacation and now I"m homesick.

Wonderful photos ... glad you are ok!

Ouch! Hope you heal up quick-and no more surprises unless there are presents involved!!

OMG, you poor dear. I am so happy you are no worse. Take care, smell the roses, pet the kitties, lie low for a bit. Love your photos.
{{{}}}

Oh, and accept tons of kisses from RoyBoy.

Yikes! How lucky that your daughter was there and you weren't alone. I hope the doctor said no cooking, no cleaning and no chores for a few days.... if not you should pretend that he/she did!

I loved the first half of your story. I did *not* love the second half. I'm with you as far as how quickly accidents are accidents, but I'm far happier that you weren't a casualty. You can bet your grandkids will call back this story. REST now.

It may take a while to feel 100% again... concussions are tricky things! Quite serious in fact.

Time to let your family take care of you.

So sorry you couldn't keep in the serenity mode of the day! Rest won't be easy but it is a requirement for the 'now'!

Thank God you're all right, Hilary. I'm the same age as you are, and we learn -- don't we? -- that a little tumble here and there isn't as harmless as it was when we were younger. And this was no LITTLE tumble. You've raised wonderful daughters -- please trust their judgment at times like this when they say things like "I'm going to hail a boat to take us back."

Someone was truly looking out for you! I'm glad things turned out as well as they did. It could have been very tragic! You have too many rugs to weave and walks to take and years to be with your family to have it turn out any other way! Be careful out there! It's not the 'known' that is scary...it's the 'unknown'!

Well I'm late to this post, so I know you're starting to feel better, but I gotta tell ya, what beautiful images! I'd love to spend a day there...

..and ofcourse, thankful you're OK. OUCH.

Oh no!! That's awful!! I hope you are feeling better! Just got home and miss the woods already--looks like an amazing hike until you slipped!

big HUGS to you!