You remember this girl, right??? 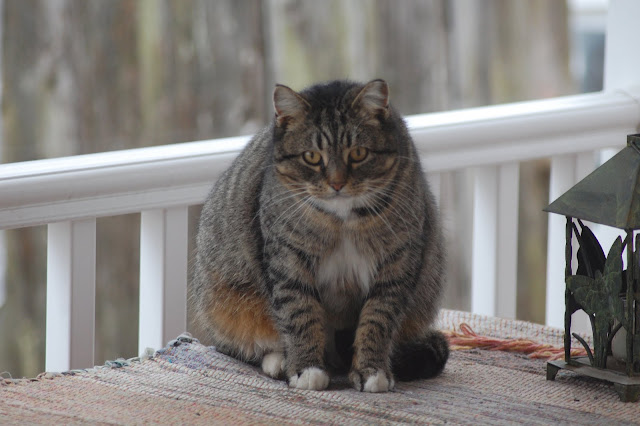 I started feeding her last summer, I called her Bubba.  Then she appeared on the porch with TWO kittens, and I knew that I had made an error.   I caught the kittens, and she stared me down for several days.
Then despite my best efforts to catch her, she resisted.  She lived the winter in the loft of the barn, with a bale of straw, and a heating pad especially made for outdoor kitties.  She ate well, and appeared to thrive.
Always with her was a gray and white cat we called Bunnynose.
We caught Bunnynose, and he made a quick trip to the vet's to get neutered.
He was mad. 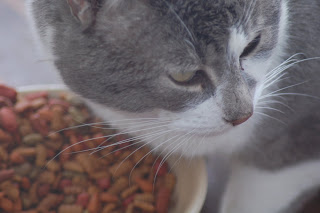 Then Bubbalee was promiscuous .....again, and got pregnant.  We watched as she got bigger and bigger.
We fed her dry food, and added a can of moist food every day. She had a heated water bowl on the porch.
We marked the calendar, and knew when to expect the babies.  When she missed a day coming to eat, and showed up thinner, we knew they had arrived.  Again, we marked the calendar, and when we knew they were 8 weeks old, we set the traps, and caught all FIVE.
And all five have homes.
Bubbalee still would not comply, but the people who owned the shed where she had her kittens, got on board.  Soon, they were able to trap her.  And I took  her, joyfully, to the vet and got her neutered, too.
When she came back, we took her to the neighbors' house.  They kept her in for a bit.
Weeks have gone by, and we have not seen hide nor hair of either of them.  No Bunnynose.  No Bubbalee.
So finally, feeling quite disrespected, and shunned, Lois called the neighbors.
Seems that Bunnynose, known to them as Pete, and Bubbalee, now named PEARL, are doing quite nicely, thank you very much.
There are happy endings.
Really.  No matter how tough things can be sometimes, no matter how many bumps there are in the road.
Sometimes, it all works out.
Just ask Pete and Pearl.

I'm so glad this story had a happy ending, you worked so hard in taking care of those once feral cats, and found wonderful homes for their babies.
Look how fat she is, and now happy for a long, long time I hope...
~Jo

SO happy for those two. Look what you did :-)

I love this story. Pete and Pearl met on a porch by the Crazy Loom Saloooooon. Sorry, it just sounded like a story that Country songs are made of. A great happy ending.

Happy endings are the best! Funny thing-my neighbors for 14 yrs were a couple named Pete and Pearl!!!! Too funny!

Love your new header. Are you feeling a bit crrrazier than usual?

Oh, I love a good Happily Ever After story!

You have one of the most loving and generous hearts I've ever known - bless you for taking care of all these helpless creatures over the years.

Pete and Pearl? What perfect cat names!! I have wondered how she was doing, after her trapping and surgery. How wonderful to have a happy ending to the story.

What a great happy ending!!!

I'm so happy for Pete and Pearl although she could use some arobics. Hopefully your neighbours know about the 'cat dancer'. It gets those kitties off their feet and flyin' through the air. Better than kettle-bells. I love happy endings and your new header.

My Sissy, that AutumnSkyRanch commenter is a hoot, no? LOL

Love the Pete and Pearl names... Thanks for the update!

Is that Bubbalee next to Roy up top? Those are the most precious pictures ever!

So happy to hear that. You did well by them. Thanks for that.

Pete and Pearl, now those are some names. Your karma points are going way up, taking care of strays both cats and dogs show what a giant heart you have. Thank you Hillary for all you do and for sharing all you do with the rest of us. Hug Roy Boy for me.

Bubbalee Pearl could be a twin to our Bubba. My daughter's cat has been on a perpetual diet for 5 years. He weighs in at 25 pounds. For some reason he is obsessed with food. It is actually sad. With his eye constantly focused on food bowls, people's plates, and kitchen floors, he misses a lot in life. Hmmm...sometimes I am like that too.