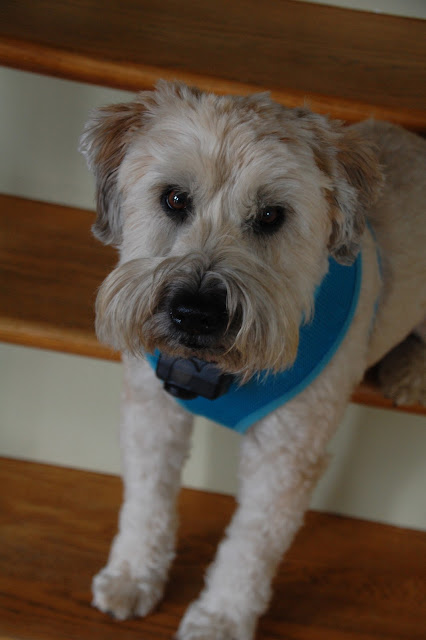 He belongs to my friend, Michelle, and today was the day to get her loom put together, so L and I went to her house.
I say 'chasing the loom', because it was one of those days.  You know the kind.....when everything that can go wrong, does.
First, let me say that I LOVE her kitchen.  It is SO RETRO, and SO COOL.    The cabinets are metal, the appliances work, and I am mad for it. 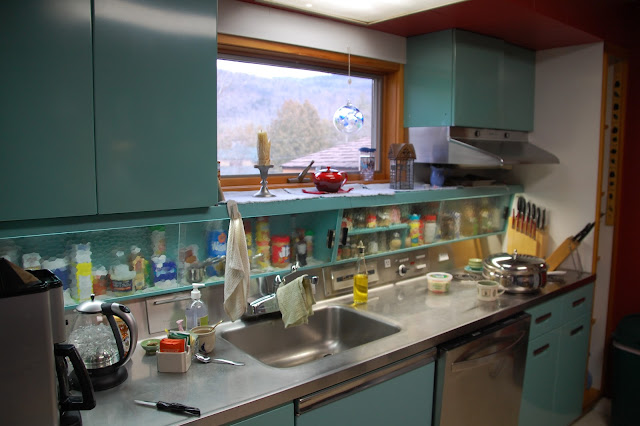 I know a lot of people would rip it out, but I am glad she isn't doing that.
Just because something is new, doesn't mean it is better. 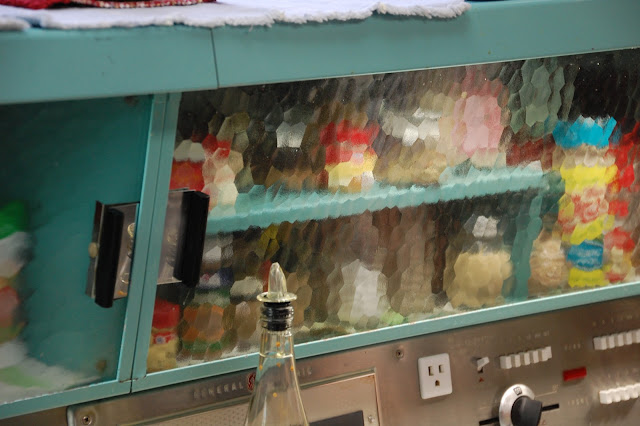 I love keeping some of the originality of a house.  I think this has a lot of personality.
Like my friend, Michelle. 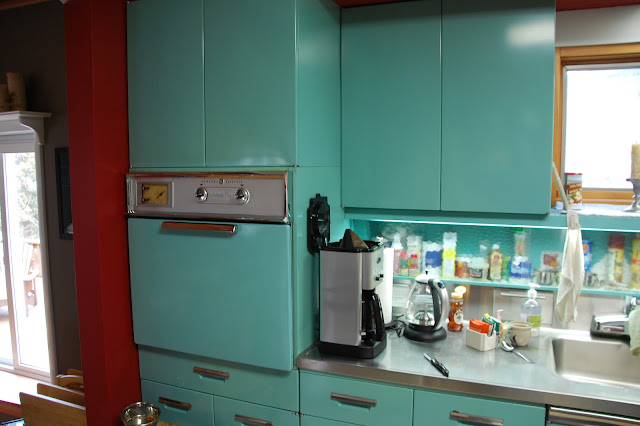 Of course, I am totally gaga about her huge living room, which she said I could show you.
I could put MY living room in here about 3 times.  No kidding. 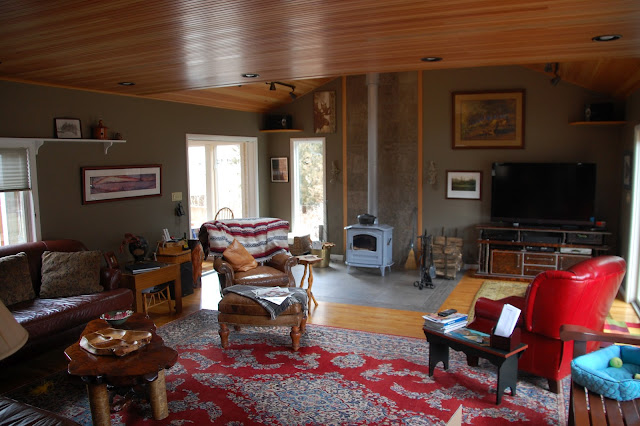 We started putting her loom together.....it used to be mine, so I know it well.  And there were two parts missing.
Good grief.
So I called another friend, who had been using the loom for a year or so, and sure enough the parts were over an hour away.
But my friend's husband INSISTED on bringing them to us, so I met him at the studio just before lunch, and L and I went BACK to the loom.
We finally got it all together, and ready to put the warp on.
Except for ONE small item.
I had a special piece made to sit down over the round back beam, so I could clamp the tension box to it.
Michelle, however, thought that it was broken, since it appeared to be a box with only three sides.  So she sent it off to her son's, to be fixed.
ACK~~!!!!! 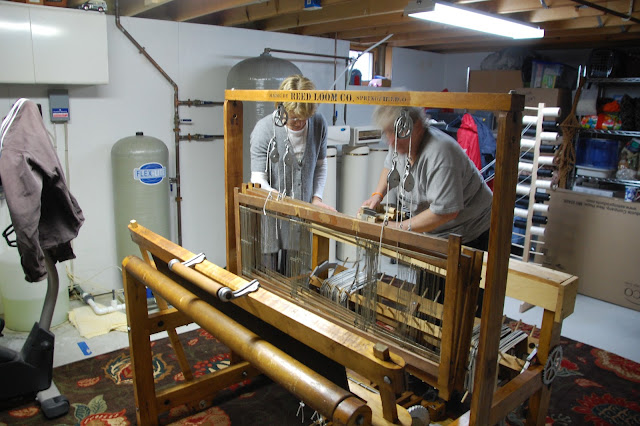 Luckily her husband was kind enough to fetch it for us, and we plowed on. 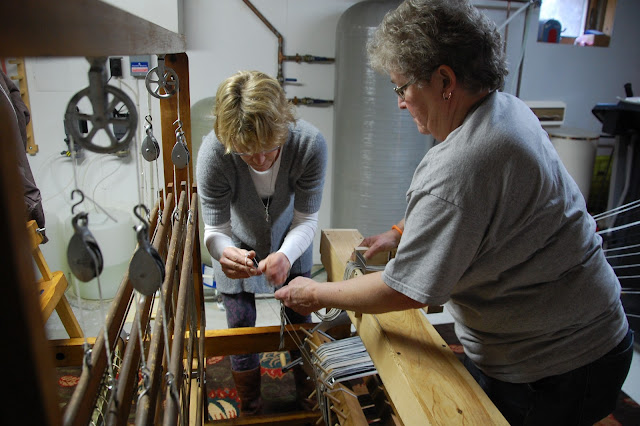 What I thought would get done in a couple of hours, max, ended up taking all day long. 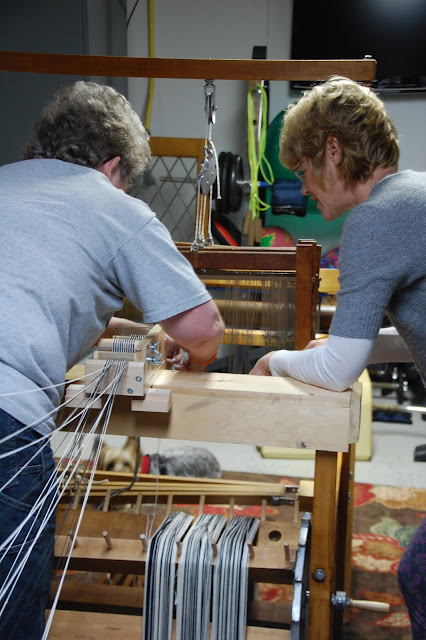 I got to do a lot of supervising, and they did the cranking.  Whew. 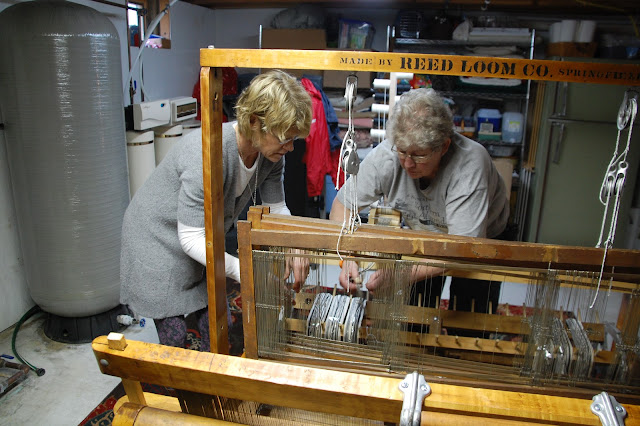 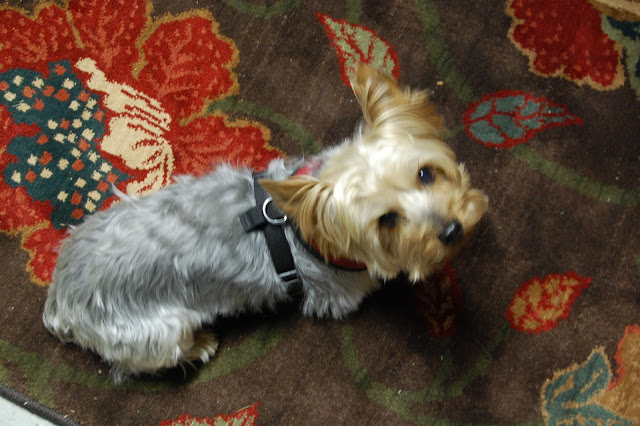 Oh, and we mustn't forget that Norman was helping.  Thank you, Norman.


Finally.
The Reed Cambridge Loom all warped and ready to go. 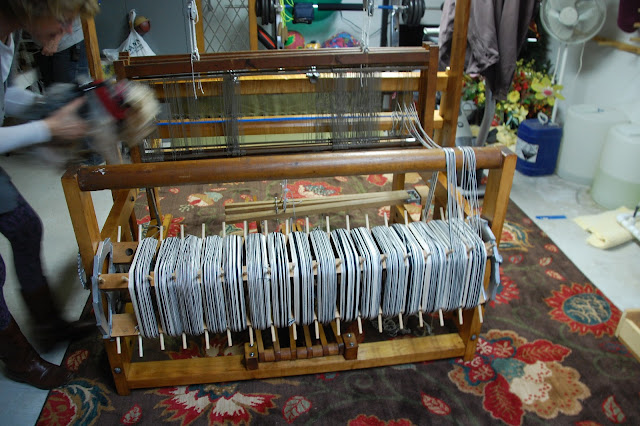 A little black and white, 40 yards, this should keep her occupied for a while. 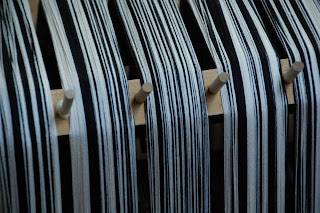 And you know what's worth spending a whole day on this????? 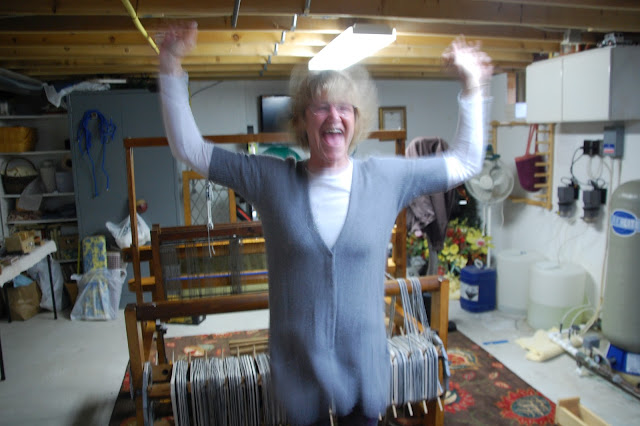 And spending the day with two good friends, just one more thing on the list of things I am grateful for.

Bravo to all of you. Love your friend's place, too. What a lot of running about, though. But so worth it in the end.

Oh yeah! Good times--remembering my first warp and how happy I was! Hope you are getting some rest and getting some better, Hilary!

A job well done by all of you. It's nice to see that so many are getting into weaving. Must keep this craft going!

It's not a job well done unless someone has to do some running around. makes for an interesting project!
Congratulations to all of you.
Teddy and Norman are adorable!

That kitchen is SO COOL! And I'm not sure I'd know what to do with myself if I had a living room that big.

What a GRAND day. Had to chuckle, I have her exact oven. Love the aqua!! I also have a stovetop and hood, same color!
:)

What an accomplishment!! and I love your friend's house.. that kitchen!!! the colors in the living room!! and what an adorable pup. THanks for taking us along.

How fun Hilary and what a beautiful loom and warp.
Now you know, I would take Teddy and Norman in a heartbeat. Makes you appreciate Roy's quite dignified ways all the more no doubt! :)

What a great day for you all.... and her kitchen is fabulous!!!!

You ladies sure know how to turn things around .. I love her retro kitchen but if I cooked, which I dont, I would want an oven with a window .. and I have to ask that rangehood? What is it over? I dont see a range .. nosy me .. and I believe my entire apartment would fit in her living room ..

Love the kitchen especially her oven! How cool and retro. Great job getting the loom put together, loved the supervisors too.

What a fun kitchen! I've never seen one like that. Love that living room too and the red chair. Sounds like a long but wonderful day with a very happy ending...a warped and ready loom. :-)

Love her kitchen too. I have an oven the exact same color.