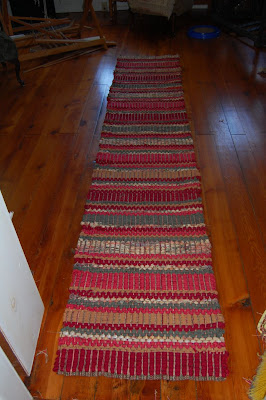 Whew. One done, one to go.
I really DO like it, though. Even while it is a pain to weave, very slow, and it demands my total concentration.
I put a long warp on the loom, so I will be making some smaller rugs in this pattern, to put on my web site.


Forgiveness is on my mind today. Anger and resentment have ruled my thoughts, for several months now. It is time to let it go. Past time. I have lots of thoughts rumbling around my head.

Here are some quotes I found about it, that spoke to my heart.

The Buddha said, "Holding onto anger is like grasping a hot coal with the intent of throwing it at someone else; you are the one who gets burned."

"It is natural for the immature to harm others. Getting angry with them is like resenting a fire for burning."

"One could say that there are three ways to get rid of anger: kill the opponent, kill yourself, or kill the anger--which one makes most sense to you?"


"Sincere forgiveness isn't colored with expectations that the other person apologize or change. Don't worry whether or not they finally understand you. Love them and release them. Life feeds back truth to people in its own way and time."

"When a deep injury is done us, we never recover until we forgive."

"There is no revenge as complete as forgiveness."

"Forgiveness is not always easy. At times, it feels more painful than the wound we suffered, to forgive the one that inflicted it. And yet, there is no peace without forgiveness."

"Forgiveness is giving up the hope that the past could be any different."

I walked along the river last night, with Eddie, and I felt my anger leaving me. I can't explain it, maybe I was just ready. But I suddenly felt lighter.
And better.
I feel free.
Have you ever wrestled with forgiveness? Is it as hard as it was for me?
I always used to joke that I needed every bit of pain my ex husband could dish out, to get me to where I am today.
I didn't think I needed more pain. But I guess I'm still learning.
Who knew?
Posted by Hilary at 9:27 PM

The rug is beautiful!
Jaimie in Evanston

My mother used to paraphrase a Bible scripture she liked, John 16:22. She would say, let no man steal your joy, and for heavens sake - don't just let them have it.

The rug is just perfect-glad it took some deep thought; it is good to stretch yourself. This is probably what brought it all to the surface again. Glad you can let go of the anger. It can drown you........

Oh yeah, I've been where you are. It took about 5 years before I truly, without strings, forgave. Now it's 5 years past that, and my life is richer for it! Life really, really is too short to dwell on the past. Move forward, weave, enjoy!

Yes, I understand anger and the how hard it is to forgive. But what I learned along the way is that you also need to forgive yourself. I'm glad you have found peace. I love the rug.

Nobody really needs the pain, but it does shape who we are, doesn't it?
I find it easy to forgive, but like one of the quotes above, I find it difficult to forget.

I do not want to be a bitter old lady who hates everything, my x-husband will not make me like that he has no power over me anymore so I try not to feel any anger, just live my life as I should have lived it for many more years before.It is so true, anger will only harm yourself but I will always remember what he did to me. You just have to learn how to live with the memories.

Anger is about the person who did you wrong but forgiveness is all about yourself and how you deal with it. I'm glad you're finding peace. You've woven a lovely life (and rug) for yourself and you should enjoy it fully.