A star is born? 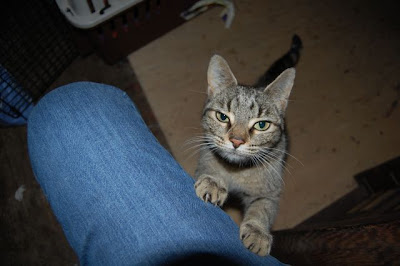 I know, you have seen plenty of CAT pictures here. And they probably get boring when they aren't your cats, or if you don't care for cats much to begin with.
This one is new. When Tammy went to put the show stuff in the barn last night, this one came running. Now usually, cats in the barn are feral, and they run AWAY from you. This little one came crying, and begging to be picked up. She is thin, so thin you can feel every vertebrae, and her little hips are bone with no padding at all.
Unfortunately, she has a big belly.
What amazes me is that she was obviously neglected, or abandoned, or otherwise abused, and yet she still comes running, expecting to be loved.
It defies explanation.

The weekend was a long one. My grandkids kept me BUSY from Friday afternoon, til I tucked them in their own beds at 8:30pm last night. Tammy took care of the show at the fiber festival, but I was there three times for different reasons.
I got home after midnight, and then this morning, there was putting the shop back together, and putting all the show stuff away.
In spite of all your good wishes, there weren't many sales.
But it's OK. I really thought of it as a promotional venture, and I didn't set myself up to be disappointed. In fact, on the positive side, it kind of proved to me that shows aren't really where it's at for me. I have been resisting that information, in spite of the evidence.
The truth of the matter is that starting a small business can be totally different from what you expect. I "thought" that being located on a main highway would bring droves of people to my door, that I would have a booming retail location.
Not really.
I get stragglers in now and then, and a lot of people for the Christmas in the Country event the first weekend of December. But otherwise, not so much.
I liken it to water running down a sandy embankment. You can predict how that water will run, but it will find its own way, or maybe several ways.
I have found that I need to be open to possibilities, and just keep my eye on the prize......which, after all, is .....for me...... just the weaving.
I opened Dec 1st, 2005. By the end of that first year, it was obvious that business was coming to me, but not through the front door.
The internet was the vehicle that arrived. Custom orders, sometimes more than one at a time.
So I took the hint, put rugs on my web site, and I started selling them there.
I occasionally taught basic weaving.
Which led me to try weaving weekends, and that has filled in some blanks.
And I have a few wholesale accounts.
So people walking in off the street have become an occasional reason to take a break from whatever I am doing.
I think it is evolving into exactly what it is supposed to be, but more than that, just what I need. Some challenging orders that pay the bills, weaving things that make me sing along with the radio, to fill the shelves, lovely sunny days left to my own devices.....what more could I ask.

As far as the kitty goes, she is at the vet's as we speak. He concurred that her lack of body fat, and her age was reason enough to terminate her pregnancy, and neuter her. The shelters are full, but she is a lucky girl. She must have seen the sign out in front of the studio..........
My husband says that I cannot save the world.
Ah, no, but I can do MY part, now can't I?

Her name is Sydney, by the way, after my Uncle Syd...........today would have been his 87th birthday. And that small gesture will make my mother VERY happy.
Watch out, Miss Puss....this girl is a sweetie! And I bet she is very photogenic.
Posted by Hilary at 7:29 PM

Oh wonderful you for taking that kitty in. She's got a darling face and still looks like a kitten... yet was having kittens of her own.

I have no doubt your business will evolve into exactly how you want it to be.

I can picture you sitting there weaving and singing, just where you should be, with a kitty lolling in the sunshine.

Glad you kept the cat and that she asked for help and you listened! As for sales-you have certainly made your niche in the weaving world-keep up the good work through the internet and on this blog! Thanks.

Awww that kitty was like a wayward teenage girl in trouble, and you the loving kind grandma listened and took her in and helped her out.... what a great loving Soul you are!

I am so glad she has found a new home. I'll bet she can't stop purring.

I love that you rescued the kitty, so cute. As for the studio and sales, I think it's just the economy people are hanging on to their pennies. I know when we do festivals with the coffee, people really think long and hard before they spend $2.00 on cup of 100% natural home grown coffee.

I guess you would tell me, keep Gypsy too instead letting someone adopt her.

It is a good thing I live off the main drag or people would leave me gifts like that all the time.

Enjoy your new Sydney. I like it too, my father was a Greenstreet and Syndey was our cousin.

what a cute cat! Please keep those kinds of photos coming, I enjoy them very much. Let us know how your older cat and the little one get along?