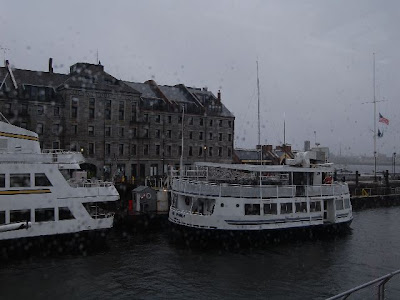 
Yesterday, we went to Boston, DH and I. For his birthday, back in June, I bought him two tickets to a Red Sox game.
We had heard all week that the weather was going to be really bad due to the hurricane coming up the coast, but we went anyway.
We already had a hotel reservation for the night, and Red Sox tickets in hand.
Besides, we needed to get away, even for just 24 hours.


When we got there, the weather was

just as predicted. Wet. We had a huge umbrella, we wore shoes, and not sandals. We had plastic rain ponchos ready.
We still got pretty wet. Not much you can do when it is raining sideways. 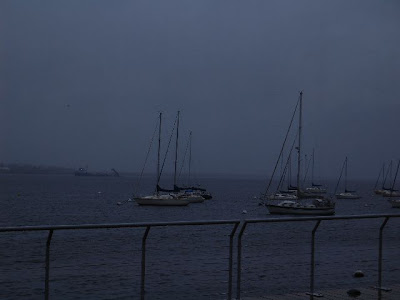 We went to the famous Quincy Market, and even though there were countless food vendors, and everything looked and smelled wonderful, there was no place to sit and eat whatever you decided to get. So we went in search of a place we had seen on the Food Channel months ago, the Union Oyster House.

It turned out that it wasn't that far away at all, and getting in out of the weather was, well, priceless.
It was pretty busy, but there were some empty tables, for which we were very grateful. 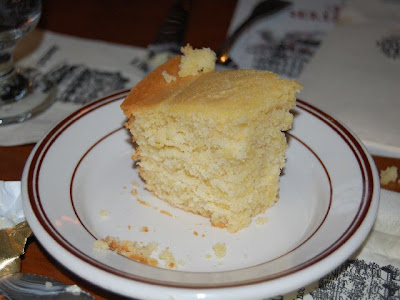 I had my heart set on New England Clam chowder, or chowda, as they say in Boston.
And I had a Caesar salad with crab cakes.
Bill went for the fish and chips, which looked awesome.

And they bring everyone fat chunks of delicious corn bread.
Mmmmmm, mmmmmm. I say, "let it rain." 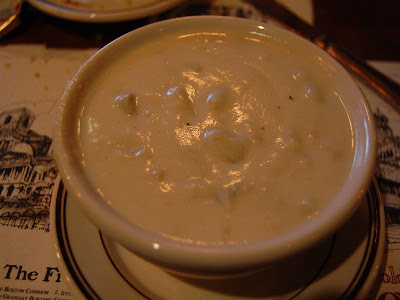 The oldest restaurant in America??? 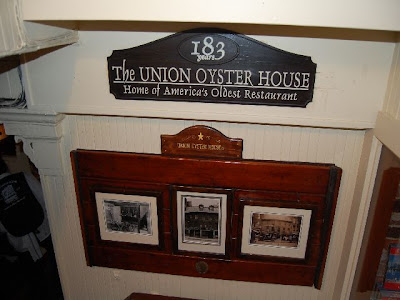 We had a great lunch, and took our time. After all, the game wasn't until 7pm.
And there was no hint at all that the rain was going to stop any time soon.

We decided to go to the Boston Aquarium, which was within walking distance.
We waited 45 minutes in the rain, just to get in.
There was also an Imax movie there.

I must admit that the aquarium was a big disappointment. I think mostly it was because there were WAY too many people there. You couldn't hear yourself think, and you could barely get close enough to the exhibits to see what they were about. And it was brutally hot.
The one thing I saw that was totally captivating, was this little boy, strapped to his momma's back with a piece of fabric. 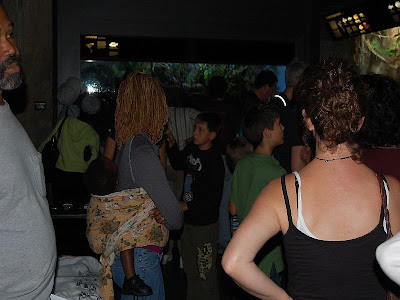 He wasn't a tiny baby, at all. But he was totally comfortable, and sleeping, well, like a baby.
When we got out of the aquarium, it was still raining, but it was an incredible relief to be out in the fresh air after being so cramped and overheated. 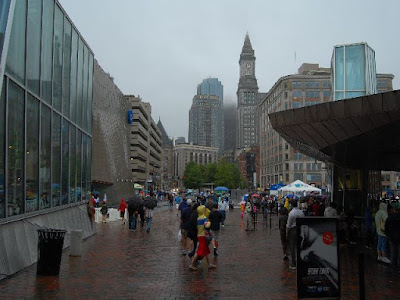 We took the greenline train, hoping to get to Fenway Park. But we soon realized that we had gotten on the wrong train.
As soon as that became apparent, we got off. Back up on the street, we started walking. It was raining still, and I think we walked in circles for awhile before we finally saw the lights of Fenway in the distance.
We anticipated all day that the game would be canceled.
But when we got there, they were just taking the cover off the field.
You can't see them, but there are scads of people behind this huge tarp, pulling it off the field.
It was still not looking all that hopeful. 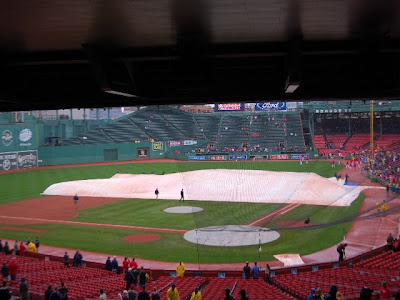 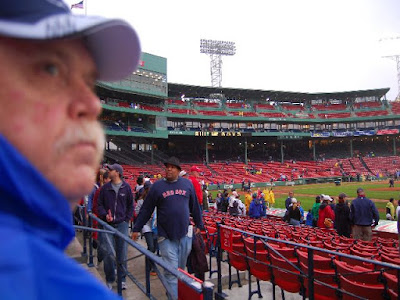 My husband, a Red Sox fan for 40+ years, was not to be deterred.
And sure enough, they came out to play ball.
Go figure. 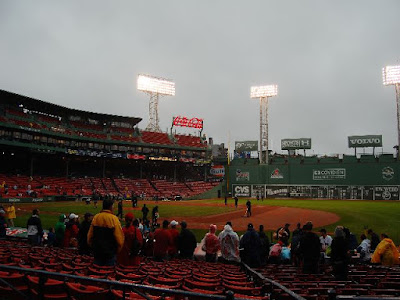 We put our rain ponchos on, so we would have something to sit on.......the seats were very wet.

It was 61 degrees, and still misting, but did it matter really?
We were already pretty wet. Our shoes were squishy. My jeans were wet to the knees, and my jacket was wet through, and I actually took it off.
Luckily I had a sweater under it. 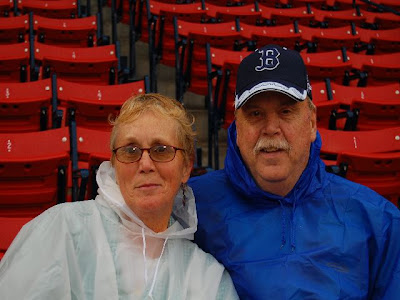 As the game began, people were streaming in to find their seats. One young couple came up to us, animated, and acted like they were thrilled to see us. The girl grabbed my hand, and when I tried to pull away, she said, "Oh, please don't disappoint me".....I looked at Bill. He looked at me.
Neither of us knew them, but they acted like they were totally charmed to meet us.
After they walked away, we wondered......who did they think we were??
We don't look famous.
Just old.
Not even old and famous.
Hmm.
My daughter said they were high.
Great.
Thanks. 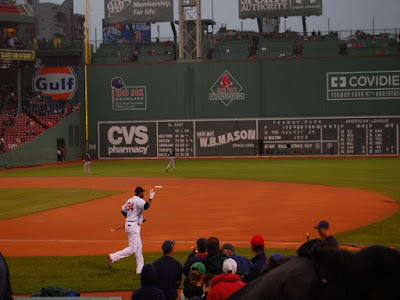 Here is Big Papi..........he may be my husband's favorite.
There is something that goes on at a Red Sox game that is pretty incredible. Red Sox fans are passionate. And they are wildly devoted.
They did the wave too many times to count. 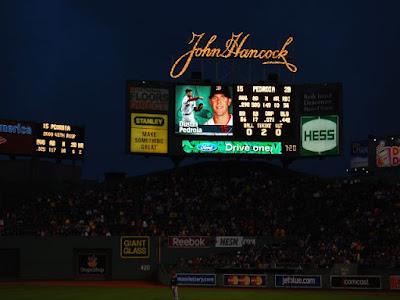 The mist cleared, and a cool breeze began to blow. The stadium began to get really full. I was amazed at the young men hawking beer, and cokes, and hot dogs, peanuts, cotton candy.
There seemed to be no end to them.

For some reason, Red Sox fans sing Sweet Caroline, at the top of their lungs. They put the words up so you can see them, and it gets rowdy in a pleasant way. 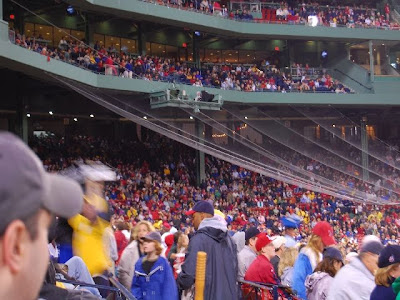 And Bill had been looking forward to it since June. 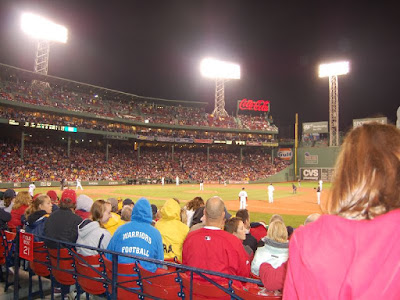 We had to take the train back to the hotel, but we managed to take the right one this time, even if it was packed, and most everyone was standing.


We were anxious to get some sleep, after our "Boston Marathon in the rain". 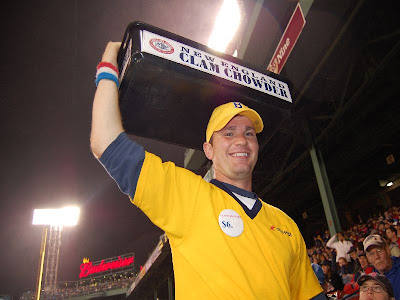 
Boston is the only place where you can buy "clam chowda" at a baseball game.

It is good to visit the busy places so you will savor home that much more!!! It looks like a fun adventure; in spite of the rain.

How fun! Your day and night sound fabulous. It actually sounds like an ideal day that I would love to have with my husband. I love baseball and have taken in a few games myself this summer. We had a great time even though we sat in the cheap seats. Next year we will be playing in an outside stadium(Minnesota) and are so looking forward to it. I think I would have fun weather it rained or not.

You and your husband look so cute together in rain gear. I'm glad that you guys had a great time!

What a wonderful day, rain and all. I've eaten at the Union Oyster House a number of times. It rarely disappoints.
I have to agree about the Aquarium, when we were there 2 years ago it was disappointing. I remember when it first opened and it seems the exhibits and such have not aged well.

What a great day despite the rain.. you were prepared for the weather anyway.

I soooo miss living close to a larger city... not in it, just close to one so you can take advantage of it's good things. Sigh... these smaller towns sometimes get a girl down.

I love Boston. Thank you for the tour and for saving a seat at the baseball game. Great photos, Hilary. :)

Thanks for the soggy red Sox game-the best part was spending the day with you !
DH

Oh, I would put up with rain too just to have some fresh clam chowda. Yum. And that cornbread looked fabulous. I should grab my husband so he can ooooh and ahhhh over the baseball stadium photos. Looks like a fabulous day of togetherness.

That was certainly a birthday celebration worth waiting for! Boston certainly is charming but the MTA is bewildering. I look forward to oysters and crab cakes next month when we'll be in Washington on the Columbia River - Port of Ilwako.