Riding in a fast car


Today I took care of my two grandchildren, Logan and Ava. We spent the morning at the studio, but it was hot, and I decided it was time we did something a little more kid oriented. They were up for it. 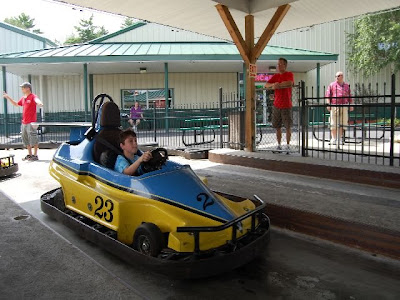 So I took them to ride the Go Karts, something I have been promising to do for awhile. Logan took to it like an old pro. Ava was too little, so Mimi had to drive a double seater, so she could go, too.
Those kids drive like maniacs. Logan passed me twice. 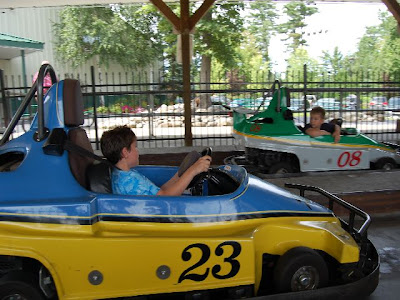 I have never driven one before, and I have to say, it wasn't my favorite pastime. 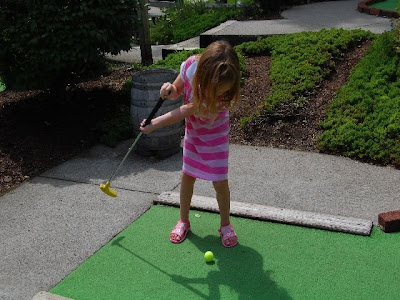 Then we played mini golf. Here is Ava perfecting her swing. She would hit the ball, and if it didn't land where she thought it should, she picked it up, and put it down in a better spot. She thoroughly enjoyed herself, and when we were done, she said, "I didn't know I was so good at that." And she laughed.
What a ticket she is.

I am still trying to accept things as they are.
Boundaries. I never imagined that I would be this old, and still have to be reminding myself where my boundaries are. But I do.
I was a single mother for a long time. My kids were my reason for keeping on, for not giving up or giving in. All the while they were growing up, I was getting to know who they were, I hoped that they would learn from my mistakes, and be stronger, smarter, better, than their mother.
Now they are adults, and every now and then, I wonder. To myself.
Who are you?
Does every mother feel this way? Sometimes I think I am surprised by characteristics inherited from their father, that I had forgotten about, having divorced him so long ago. Blindsided. Sometimes, I must admit, that I say to myself, "this isn't fair".
Then I sit quietly, something I honestly don't do enough of, and it comes to me.
This is MY life. I have raised my children. I love them more than the air I breathe, but they are not mine anymore. Loving them is letting them go, even if at times, I am not impressed with their choices, and even if I don't understand who the hell they are.
I do understand, finally, after years of not knowing, who I am. And that is a gift that I do not take lightly.
Until next time.
Hilary
Posted by Hilary at 6:20 PM

And isn't it freeing!
Jaimie

Having children is a gift that just keeps giving-we learn so much about ourselves as they grow and then watch them emerge as individuals which drive us crazy and delight us all at once! It is a miracle, isn't it?!

Knowing yourself is a great gift - it is also a great gift to let someone else find out who they are - and sometimes it takes mistakes to learn it! Good job!

I am just "becoming" me at almost 56 so I know exactly what you mean. It takes a long time not to let other people or things control you. Donna S.

Tried to leave a comment on here this morning and after several attempts, my computer went wonky.
Knowing yourself is what it's all about.