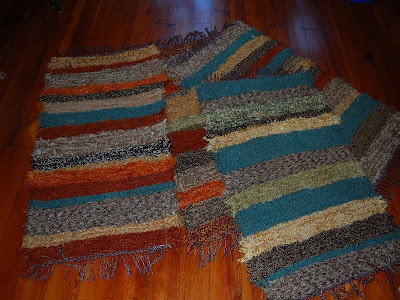 Today I decided to just weave. I haven't just woven rugs for the shop in a while, so that was my intent today.
Orders can wait a day.
Here they are, do you like them???
I create them as I go along, and I use colors that I like. I just figure that someone out there will share my taste.
So far, that theory has worked for me.


I had Miles, a young man that does yard work for me, out in the barn sorting a bale of selvedge. I kept going out there, directing him, and checking his progress.
Finally, after lunch, I realized that if I didn't get my butt out there and help/supervise, that it was going to take a lot longer than I wanted it to.
After what seemed like forever, in a hot barn, sweating like I was in a sauna, we got the 4th bale done. I went in the house, glanced up at the clock, and was quite surprised to find that it was way after 4pm.
We will tackle the rest of it later this week.
There are two bales left, and I have decided that I am NOT going to sell any of the selvedge right now. I think after buying it, paying for shipping, paying for the dumpster, the clear plastic bags, paying Tammy and Miles to help, getting my daughter to help me on her day off, and spending my own precious time out there in the heat, I would have to charge $5/lb to make any money. Guess I jumped the gun.
Shut up, Bill.
:)
So I am stashing it, keeping it for myself, and sitting back feeling smug because I have enough of it to weave rugs for several years, at least.
Yesterday I went for my first acupuncture session. Not the first in my life, but the first at this new place, The Acupuncture Studio and the first in a few years. I have only actually had a couple of treatments.
I went for my back and neck, and in particular my shoulder blades. I probably wouldn't have so much pain there if I didn't weave, and took it easy. But since that isn't about to happen, I thought I would give this a try.
I was not expecting what happened.
While I was lying there, dozing off occasionally, I became aware that my sinuses were suddenly draining in a disturbing way. At first I thought perhaps it was a fluke, but on the way home I got a screaming headache, that got worse and worse despite Advil, until I finally went to bed at 9pm just to get rid of it. It was the worst headache I have had in some time.
Nothing worked, I had the headache all night, and I kept waking up because of it. When I got up this morning, I still had it, though not as intense.
So when all else fails, I say google it. So I did, and found out that it could be because the treatment was too aggressive, or the needles were placed incorrectly, or it could just signify healing had started.
My sinuses are still draining, in spite of sorting selvedge all day, which would usually cause me to be extremely congested.
I have another acupuncture treatment scheduled for Thursday, and I am curious about how I will feel afterwards.
Anybody out there have any experience with acupuncture?
Now I am lounging on the couch talking to you all, while DH watches ........you guessed it, the Red Sox.
Nothing new here.
Later.......
Posted by Hilary at 6:47 PM

I have always wanted to try acupunture and do use acupressure on myself.

Good luck...this could all the congestion in your life and your sinuses is clearing.

Love your philosophy on the bales of fiber! Good for you (I am stubborn on admitting I MIGHT have made a mistake, too!) I am clueless on the acupuncture-are you sure you want to go back?! These rugs are beautiful and are calling to my bare feet!

Hi......love your beautiful work. I had acupuncture for allergies. At first it worked wonderfully, then no. I did think the process was relaxing and peaceful.
Gayle

I had a friend who started going for acupuncture for allergies (after months of sterioid etc) she said the same about amazing amount of drainage, but no headache. the combination of being in the barn (mold) and acupucture may have allowed you to flush it all out.

Love the oranges and blues together in the rug!