In a reclining position.

Ah, the couch.   I love my couch.  You've seen it a dozen times, usually with Roy lounging on it.
He has an old bedspread there, that he loves.   If we leave him home alone, he tries to get under it, and when we return, all the pillows are on the floor, and the quilt is in a bunch.  That's the only bad thing he does when left alone, besides maybe put one of our shoes on the couch, to show us how disgusted he is with us.

DH and I searched for the right sofa for a while, and as soon as I saw this one, I knew it was the one.  We bought the sofa, a chair, and a chaise lounge. Roy has claimed all three, but he shares.

You're wondering what my point is by now. 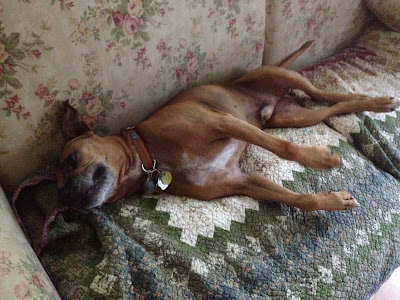 Usually, the only time you would ever find me on the couch, is after dinner, with a book, or my laptop, while DH watches awful TV.
That was before my flip through the air and crack to the skull event. The infamous 8/11/11.

The past year has found me becoming intimately acquainted with my sofa.
If you look up "couch" or "sofa", it says that it is a long, stuffed seat for reclining.
And recline, I have. 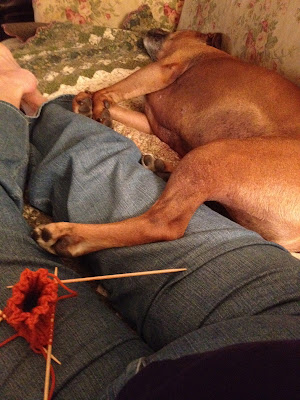 Yesterday, when I woke up with the cold firmly planted in my chest, and coughing like a crazy woman, I retreated to "the couch".  Every cough made decompressed skull feel like an impending explosion.  So I stayed put.  I watched episodes of "Parenthood" on my Mac.
I have become a Parenthood groupie.  It makes me laugh, makes me cry, makes me totally annoyed with the bad choices they make, and sometimes, it makes me squirm.
Like last night, when Sarah took in her ex husband/abusive alcoholic, and then ran around insanely trying to get him into rehab, instead of letting the loser figure it out for himself.

Pfffft, I said to myself.   Dope.  Who would do that?  Codependent BS.
(this is just part of my tirade while trying desperately to steam my lungs out in the hot tub at midnight)
And suddenly, it occurred to me, with the snow swirling around my head, a total contrast to the heat infusing my body.....................I did that.
I did exactly that very same thing.  THE SAME THING. O.M.G.
No wonder it made me squirmy.   Nofreakingwonder.

I threatened my ex.  I held him captive, in a sense, and drove him to rehab, after I had made all the arrangements myself.  I orchestrated the entire intervention.  And I, good codependent little girl that I was, I was the only one who intervened.

I tell myself sometimes, that it was wonderful.  After all, that was 1987, and he has been clean and sober, remarried, with more children, and happy I think, ever since.
But even so, watching Sarah dispense with her own life, jeopardize her own happiness, to save a drunk who had made her life MISERABLE, well, it just rankled.  Pure. And. Simple.

It's snowing, again.  DH has gone to the store to get me cough medicine.  While I am a firm believer that men just annoy women by nature, he is a good man who thinks of my best interest all the time.
He has been by my side and stuck with me through it all.
A tough year.
Soon to be LAST YEAR.
I am not going to define myself by who I was in 1987, and I am going to leave 2012 behind, as well.
2012, with its never ending headache, the not knowing, the worry, the depression, the surgery, the tough recovery.
I will, however, take with me the love and support of my family and friends,  the sweetness of being held up and encouraged and even carried sometimes, when it seemed like I was nearly lost. 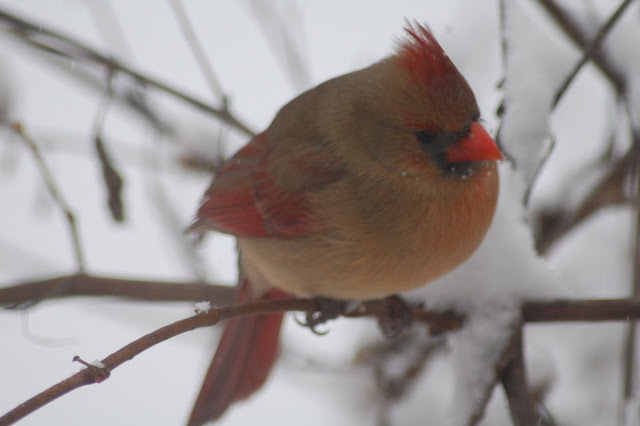 I think of myself during previous chapters of life and wonder who the heck I was and what was I thinking making those choices? It boggles the mind. Having the unconditional love of a good man for this chapter of my life is priceless.

Cheers to a fresh new year!!

I love your optimism, Hilary! I tried it in 2011, after Kelly passed away, but was foiled by bouts of bronchitis, pneumonia, and a law suit against a company that stole my designs. In January, I launch a new line at CHA (Craft & Hobby Assoc.) trade show and have told myself, "it's time to move forward!!" BTW, one of my favorite shows in Leverage...I love how they go after the bad guys who take, take, take; my inner avenger wants for all the bad to get what's coming to them:-D Happy 2013!! XOXO

You're one of the strongest people I know. You keep proving that time and time again.

"..I am a firm believer that men just annoy women by nature.." Totally cracked me up.

Happy New Year... isn't it great that we get to begin again? I am sure that, despite HH, you have grown and learned some remarkable things.

I hope you continue to heal and have more and more good days ahead!

Nice photos ! Hey our Miggs is the same she has a couch with a blanket on and every time we go out she collects our slippers and puts each one in a particular spot one of mine is always with her . Hoping this new year will be a good one for all ! Hoping you will have a Happy New Year !

Sorry to hear you're not feeling well. Roy is a good get well companion though. I hope you feel better very soon. I'm a Parenthood groupie too. I love that show! Just wait til you get to the latest episodes of the current season. They're super intense and made me cry and get mad and happy and...wow! I love that show! Here's hoping 2013 will be a wonderful year for all of us! I'm so ready to leave 2012 behind too! Take care!

I've done some things in the past I'd never do the same way now, but that is because I learned from doing them the way I did in the first place. If I hadn't, I wouldn't have learned it...because I am one of those people who has to learn the hard way--LOL!

I had to quit watching Parenthood because of all the various (stupid) ways they handle things that drive me up the wall. Should be called How Not To Parent--LOL!

I am a Parenthood fan, too. But Sarah continues to drive me crazy! Soon 2012 will be nothing but a memory, Hilary, and we get to start a fresh slate. Right? :-)

A toast to you then, Hilary, for the coming year to be so very much better than the past one.

Love your statement about men, too!

It is amazing the choices we make as we are in the midst of situations. I wonder myself about the past things I have done..."What were you thinking?" Or not thinking!
Happy New Year to you sweet lady. It's going to be a fun one! I am making new changes and new choices. I can't wait to see how it all turns out.
Love the picture of the bird.

I say amen to that. I am done with 2012 also. Next year will be a good year, and with my retirement soon, I can hardly wait. Still will pray for your complete recovery. New year, new prayers. Take care and will be writing to you next year.