That would be my mother.  88 years old today.
And in spite of all her 'whingeing', as they say in England, she is doing quite fine.
Sometimes, I think that all old English women act like the queen,  and my mother is no exception.
She 'expects' to be in good health, and if something goes wrong, she 'expects' the doctor to give her something to FIX IT.
She does think that her opinion is the only one that matters, and that the world really does really revolve around her.
Having her body grow old on her is an inconvenience, she thinks, that is just WRONG.
On the one hand, she is so generous, she is always giving to some charity, or helping out family.
But on the other hand, she is the most self absorbed person I know.  It's confusing, at times.
To me, not her.

Well, today, the world.......at least ours........does revolve around her.  After all, she is EIGHTY EIGHT.  My God.
After many plans to coordinate between DH, daughters and myself, the party was on.
Making food at the studio, so she wouldn't be nosing around, having everyone arrive after I left with her for church.
A buffet of food, balloons, flowers, a huge surprise when she walked in the door.  Hoping, of course, that she would be extremely taken aback, and pleased, but not to the extent that she collapsed.
Oh, the peril.

Everyone was at my house, getting ready, and waiting patiently,while I had her at church.
There were 20 of us altogether. 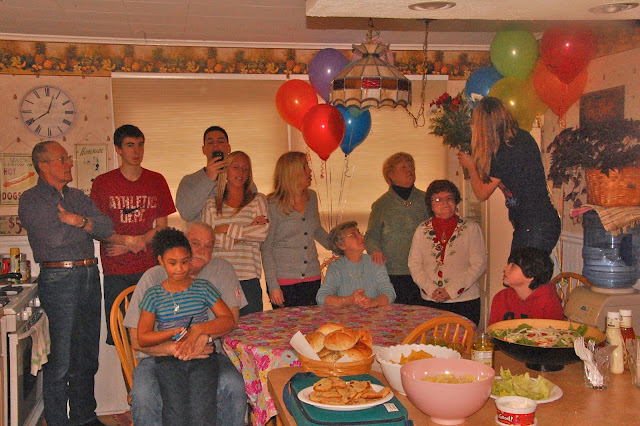 We were keeping in touch texting........so they would be ready for us.
The kids loved the whole surprise thing. 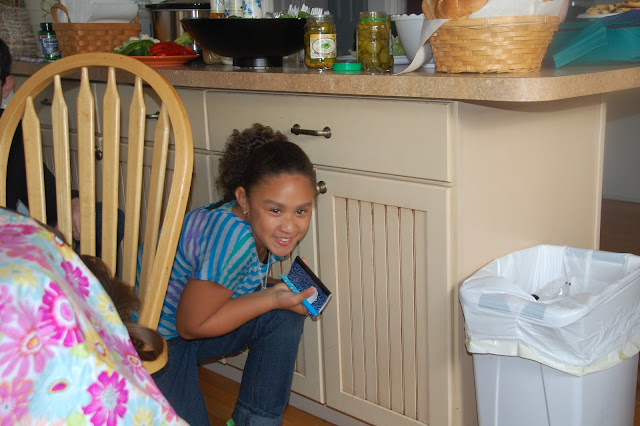 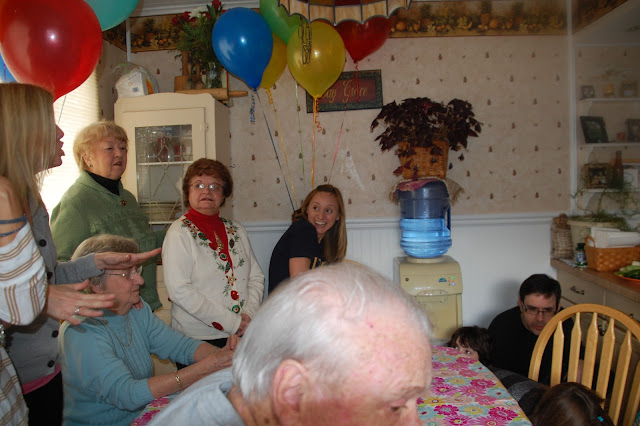 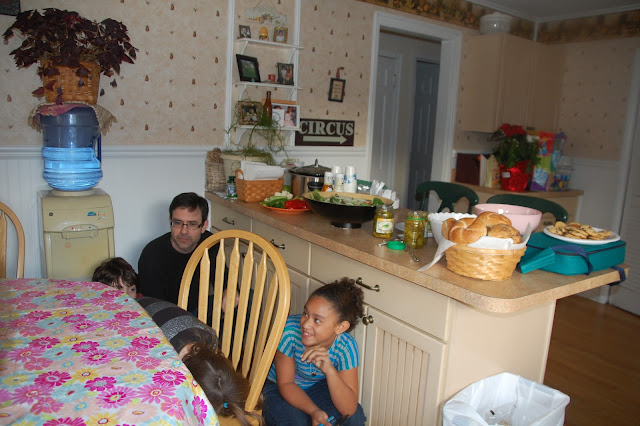 My mother, in the green, was sufficiently taken by surprise. 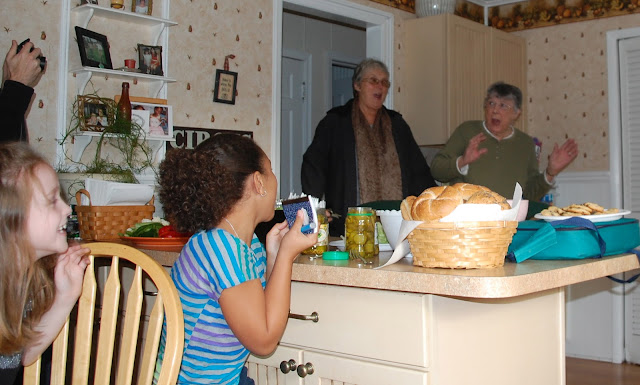 She must be exhausted by now, she pretty much talked non stop for 4 hours.
Mercy. 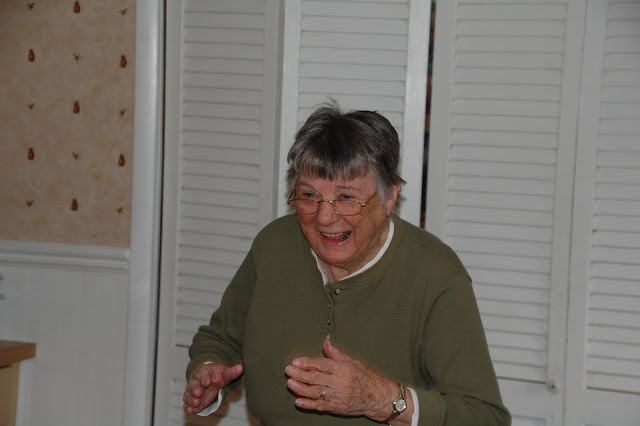 But she had fun, she loved every minute of it.
She did, however, say that she couldn't believe I was responsible for any of this, since I was so SERIOUS.
Oh, dear, sometimes I wonder what planet she is on. 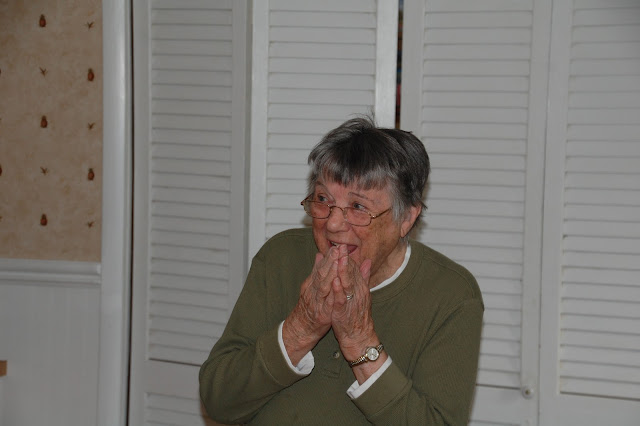 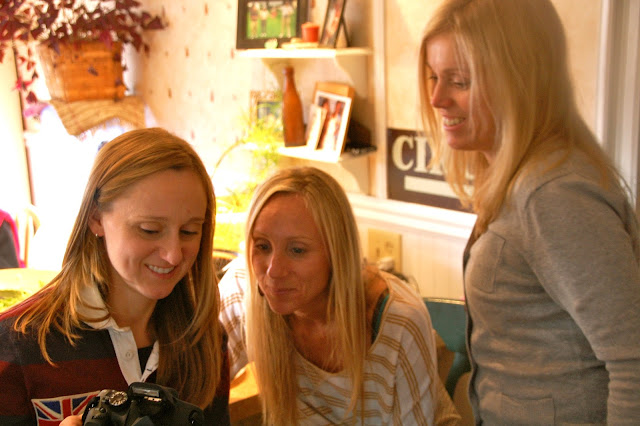 Here are my three lovely girls.    I couldn't love them more. 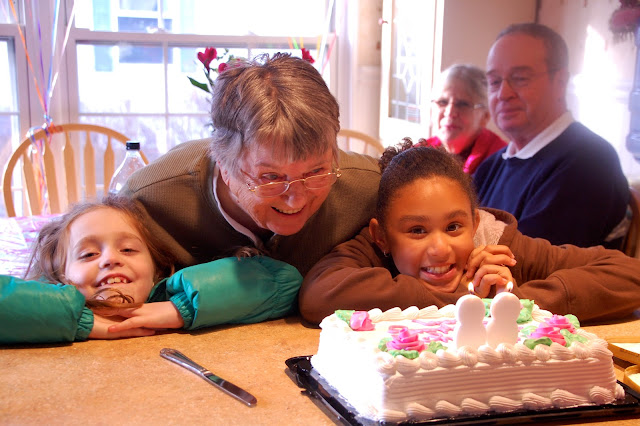 Someone gave her a Queen Elizabeth that waves continuously, and operates on solar energy. 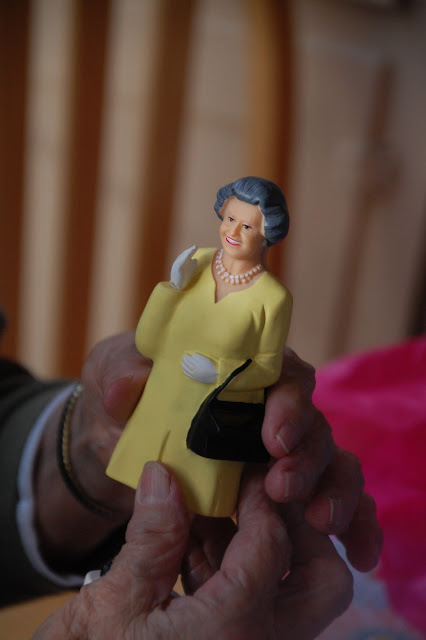 But do not be misled.
The real queen is right here, and doing just fine. 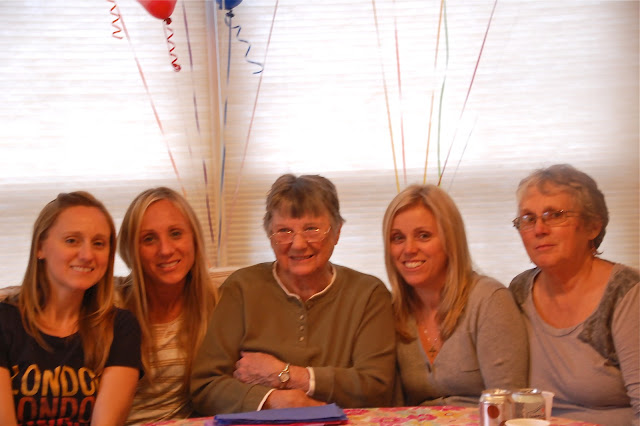 Morgan, Holly, my mother the Queen, Brooke, and moi.
I have to stop being so serious.
Ha!

Wow! She sure doesn't look anywhere near her age! I think you are right: she's closer to eight than eighty-eight! :-)

Lovely day for everyone! Happy birthday to your mama! Now go practice smiling since with a family like yours, you have much to smile about. :))

Ah..this was fun. What great photos. Love the surprise one and how the kids are so into it. That's a great photo at the end. Your mom looks great. Me thinks I need to act more like a queen around here. It obviously keeps you young. :)

Happy Birthday (late) to your Mom. You all pulled off a grand day for her. She is lucky to have her family. I guess she really had a hand in teaching everyone, she did good! She looks so good for 88!

What a wonderful day with your girls and mom; I'd give anything to have a day like that:-D You are one blessed woman, my friend, XOXO

Looks like everyone had a great day!! Hugs, Debbie

What a gorgeous looking family you are. All four generations of you. Happy Birthday to your mother.

Happy Birthday to your mother.

Your mom looks very happy! I have to ask--was she always self absorbed or did it come with old age? She seems to be quite the character!
My mom is 84 and isn't quite sure who I am anymore--though she knows I am "someone" to her! I hope to visit her after Christmas as she lives two states away.

She doesn't look 88 at all!! Maybe being queen adds years to your life, eh?

I love the picture of the three generations of women!! :) :)

Beautiful Family. Wonderful event. I too have 3 daughters, sadly my mother is no longer here on earth but forever close in my heart. I'm happy to hear you're feeling better. I hope you continue to heal. I love to read your posts. And someday I'm going to do something just for me and get one of your potholder makers. They look awesome! I love to make those! I bought one of those cheapy ones just to be able to do them with my granddaughters.....just not very good. But they had fun! HA! Take Care!