7a.m.  Up with the chickens.
Not really, we don't have any chickens.
8 a.m.  Walking Roy for a 3 miler.
9 a.m.  At the studio, see Enough sleeping in the solar cat house, feed Next on the porch, bring out a can of smelly tuna cat food, bait the Havaheart, scurry back up on the porch to watch.
Enough runs in trap, eats.  I watch.  WTH??????   Then he takes a step FORWARD.  SLAM.  He is trapped.  And very unhappy, trying to get out.
It's futile.  Trust me.  Those Havaheart traps are sturdy.  So I run in and get a big piece of fabric, to cover the trap with, lock the door, and put plastic bags in the back of my car, just in case Enough decides to pee.
Call the vet on the way..........they know me.  I just tell them I am soon to arrive with another candidate.
They will neuter him, and examine him as well, since he has been lying around alot the last couple of days, he may already have an injury from fighting.
Hopefully, his fighting days are over.
Yay.

I should have made a poster board, with all their pictures.
Starting back in 2007.
Kizzy.
Miss Puss.
Jinks, and three of Jinksie's siblings, who went to be adopted.
Sydney
Bubba Lee's first two kittens, who were adopted.
Bunnynose, aka Pete, who has a home across the street.
Bubba Lee's five kittens, who were adopted.
Ringo, who hated us and ran away.
Bubba Lee, aka Pearl, who was adopted.
Also, aka Smokey, who my friend took home with her.
Next
Enough

Did  I miss any??   And yes, the vet gives me a discount.  He probably thinks I am mentally deficient, bringing all these stray cats to him.
He doesn't understand.  There's a sign out front.  Cats come here, when they have nobody.  They come lonely, and hungry, and scared.
They get food.  They get love, if they allow it.  They get neutered.
That's how we roll.


Back at the studio, I feed the rest of the cats, change litter boxes, give Kizzy his pill, and take some pictures of the rugs I made yesterday. 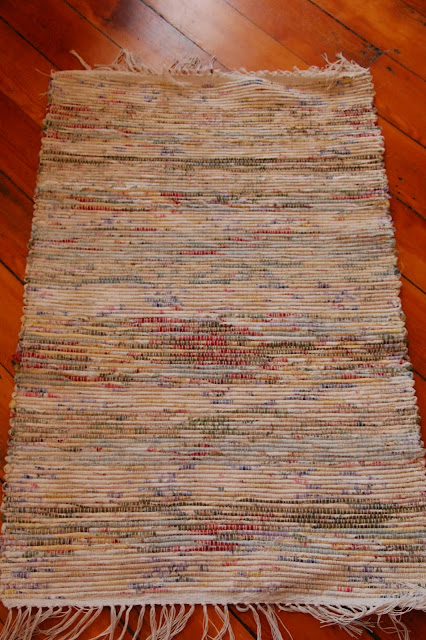 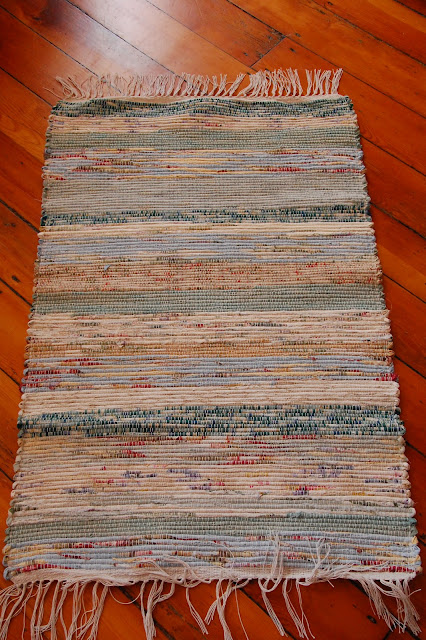 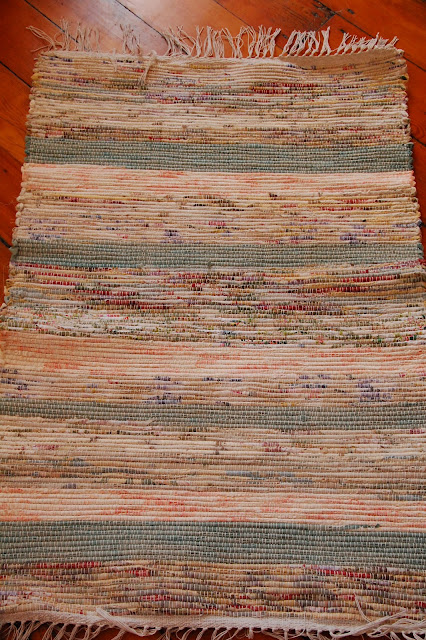 I know it's probably inviting a snow storm,  but I couldn't help it.  I tore the plastic off the porch, and let the breeze blow through.
Marvelous. 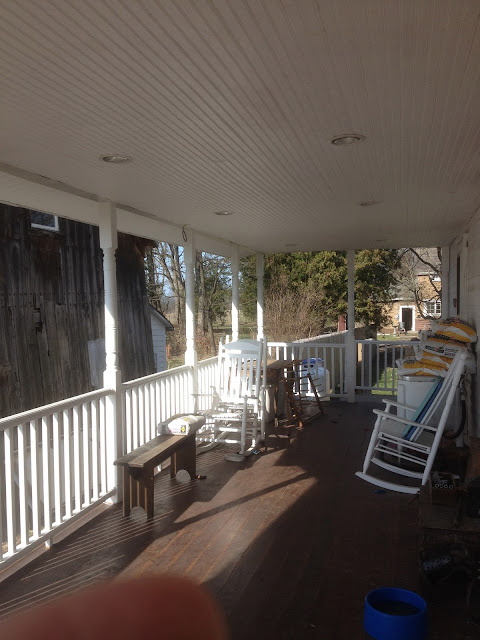 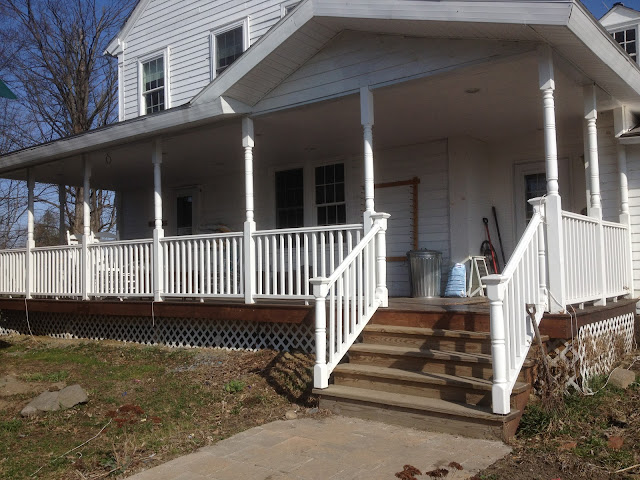 Then finally, I got down to weaving.

A friend said she admired my tenacity.  Cuz as you all know, it hasn't been an easy year.
But I'm not sure it isn't just plain old pig headedness that keeps me going.

And I am sustained by the things that matter most.
My love for my family and my friends.
My passion for weaving.

Tell me that this explosion of color doesn't make you feel BETTER. 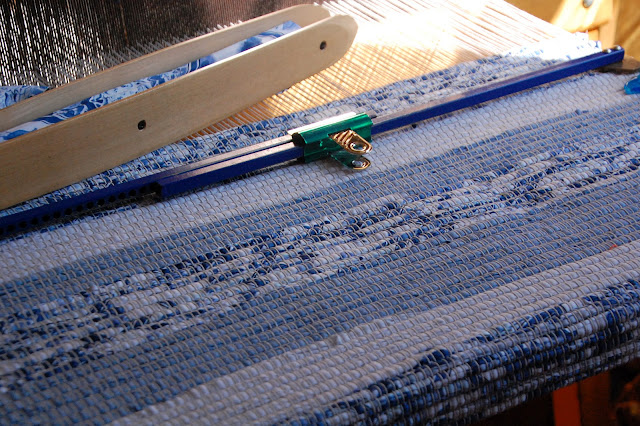 It totally makes me smile. To me, it is the simplification of all that's good and beautiful and sweet in this world.
Amen. 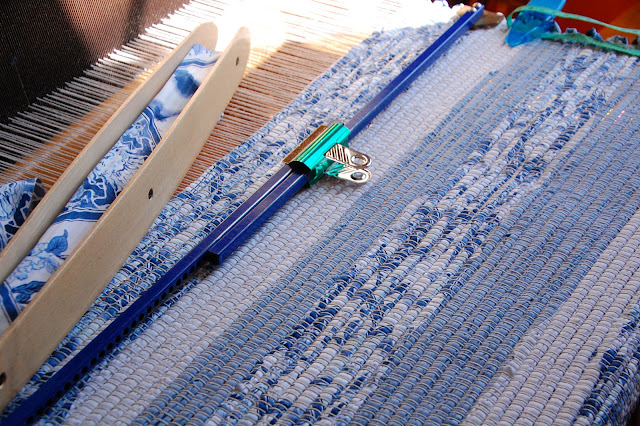 Well in my next life if I come back as a cat you will see me sitting on your front porch, whether you still live there or not!

You are such a kitty angel.
Love all the colors of your rugs. There's one there that reminds me of the beach.

Cats just know, don't they? How wonderful you are, caring for them. And I'll always admire your tenacity, H.

I'd like to hire you as my 'assistant'. Your morning sounds much like mine but I'm actually hired to do all that. What happens when the next one comes after Enough? We have vets here that would love to have your business. I understand your heart, though. I would do the same. I have done the same. Many a cat has come to our door over the years since we moved closer to the country. I had 1 cat for 14 years and then when we moved here within 2 years I had 5. That was years ago, 22 to be exact. We have had many cats since and they were all strays. But I know when enough is enough. Love the colours of your rug and I am so happy the head has quieted down a bit for you. Keep us posted on kitty. Hugs, Deb

You are the true kitty whisperer. I'm grateful for that. And that blue reminds me of a country kitchen.

love love love that blue and I could have sworn there were more kitties than that.

Good on you for taking care of the local stray population. I have a feral tom that I've been trying to trap, but he hasn't fallen for the good smelly food in the trap yet. Wouldn't mind having him around, except that he likes to beat the crap out of my resident cats.

My days lately revolve around the bottle lamb. Out to the barn every few hours with his bottle. I'm exhausted!

Oh! Those gorgeous rugs! My mother had some just like that, made by a local weaver who has long since passed away (as have my mother and the rugs!). What memories you've stirred!

Love the fact that cats know it's safe to come to you :)

My vet would love you .. he started The Toby Fund .. donations go to buy a second (they already bought the first) RV equipped as a rolling hospital .. it goes to the 'outer' boroughs and anyone who brings in a cat, stray or owned, to be neutered gets it done for free ... that's just the way he, Dr Andrew Kaplan, rolls.. I love the blue in the last photo and the new rugs are lovely ...but no where as lovely as someone so special they catch strays, get 'em fixed and help get them forever homes .. you are my hero!

Oh my that first rug looks like that big one you had when I came to your shop and I fell in love...sigh...love the blue too. I'm with Di...I'm coming back as a kitty and living on your lovely porch!!!

LUV Love LOVE!!! The blue rug!!!
And yeah, you are busy, you have purpose, and you get tired. that's a good thing!
Martha

Those blues sure are beautiful! ...and so is your porch.

Maybe you have the cat version of the hobo marks used during the Depression...somewhere near your place must be a cat mark that means "nice lady who will feed you lives here." :)