Let me tell you about Jinksie.
She is a pretty girl, and very, very sweet.  She was born in the wild, and trapped by me when she was about 12 weeks old.  She went to the vet, and then straight on to the studio, where she has lived ever since. 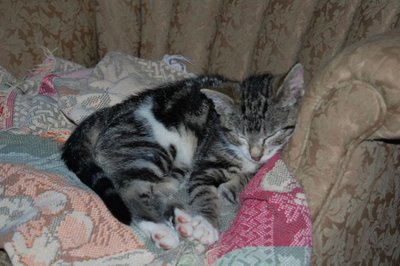 By the time she was grown, I began to realize that she had some issues.  Her back doesn't seem to be connected to her front.  When she walks, it is evident that there is some deformity of her spine.  She doesn't seem to be in any pain, in fact, she seems happy enough.
She is also, I am afraid, perhaps a little slow mentally.  And mostly always scared, though she has been treated tenderly from the beginning.
She only allows you to pet and love her, when she is lying down.  You can't touch her when she is on her feet.  She simply won't allow it.

She has gotten very long in body, and she has the longest tail of any cat I have ever seen.
This morning, when we got to the studio, she was definitely SPOOKED.
Her eyes were as big as saucers, and she was huddled down behind a loom. She was so upset, that she let me pick her up.  Unheard of.
After about an hour shut in the living room, she calmed down.
We think the source of her anguish was Kizzy, who had gotten tangled up in a plastic grocery bag.  Tattered and chewed up, the bag was still around his back legs.
But that wasn't the end of it.
For several hours, he alternately threw up, and acted constipated.
So now he is at the vet's, hoping they can figure out what is wrong, and hoping it is not serious.
I felt like a criminal, leaving him there.

I had to do some work on the Macomber to get it up and running.   The jacks needed to be cleaned, and then all the treadles needed to be tied up.
It was a two person job, for sure.
But finally, it is operational. 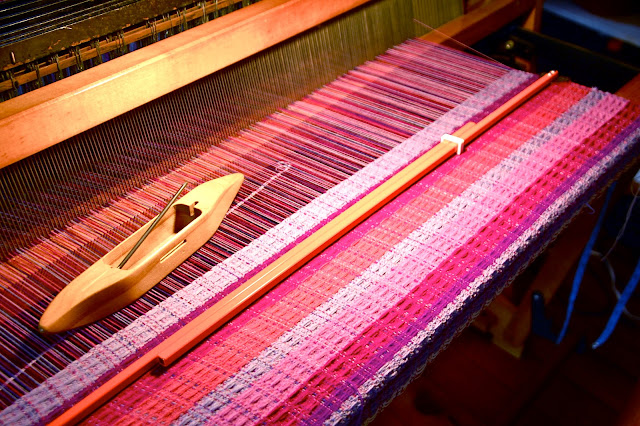 This is a wool blanket in a honeycomb pattern.   It is kind of slow going.......but I like the rhythm of it. 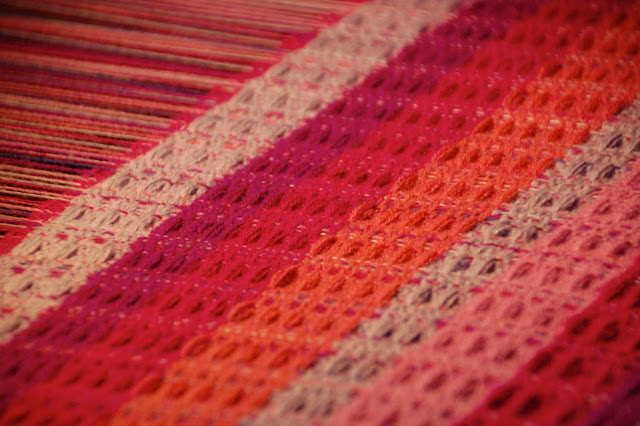 Not sure about my color choices, but maybe I will like it better when it is off the loom. 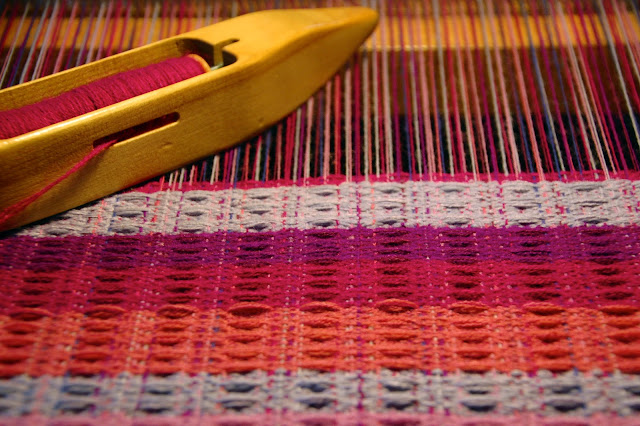 Lois has come up with a new product.........I like to call them L's Long Lean Table runners.
You know, for those skinny hall tables.
I think they are brilliant. 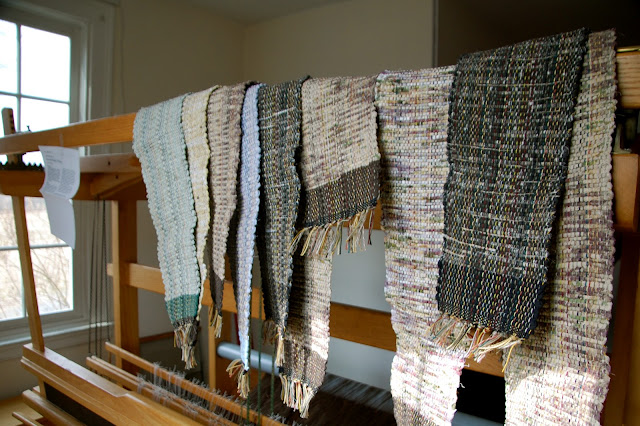 And she did a good job.
I can definitely see a change in her weaving....the kind of change that takes time.
Practice.  Patience.  All those things you balk over in the beginning.
And then, when you're not thinking about it, they happen. 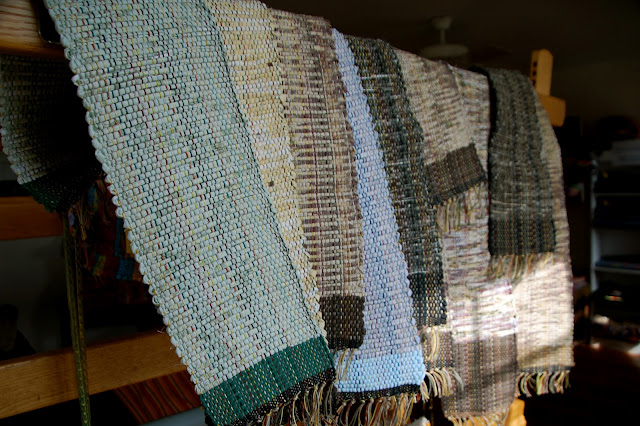 You are a worthy apprentice. 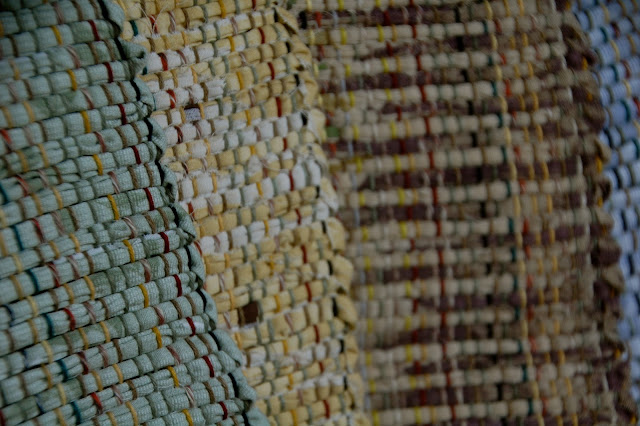 I'm guessing you think he may have eaten part of the plastic bag and now it is lodged. I've heard of it happening. I hope he'll be ok, poor cat. It is such a crap shoot for these poor strays when you find them. Your little one with the spinal issues may be what is known as a CH kitten. I'm sorry I can't think of what that stands for right now but you can google it. It is where the mother is a carrier for distemper and the kittens end up with motor difficulties. Often you will see them where they fall over often and can't get the back end moving with the front. They are usually very affectionate cats because they depend so much on their human to help them get around. I have seen whole litters with this handicap. Keep us posted on how they are doing. You have been so kind to give these throw-aways a loving home. Deb

Cereballar hypoplasia is what it is called and they do seem to be a bit slow, also.

Mr. B and I rescued a wild litter and kept three of them. They are now thirteen years old. I like the colors you are using for the blanket. Sometimes it is nice to use colors that are not your usual ones. The narrow runners are very nice. Amazing what different looks you get by changing the weft threads.

Poor kitty. I hope he'll be okay. Jinksie is a beauty. One of my two is a panicky cat.. the other as calm as could be. Zephyr the scaredy cat jumps at every sound, takes off for hours when I vacuum and is uncomfortable when picked up. He'll flop down and offer his belly with the loudest of purrs when he's released though. Sorry to hear that each of them has their woes. CH does sound like it could be the problem.

Kudos to L .. those look so good I wish I had a hall to put a table in! And that blanket is lovely, I love waffle weave blankets for summer.

Poor babies ... getting stuck in a plastic bag is scary stuff. Once our late great Gus thought it would be good fun to hide inside a supermarket paperbag (which was inside a plastic bag) of course he got stuck trying to get out and then as only a cat can, he ran crazy all over the apartment with the bag handle around his neck! It took a few minutes to catch and release him .. the whole time he was hysterical which did not make it easy .. I bet Krizzy tries to chew his way out and ate some of the bag.. I am sure the vet will give him something to help pass it .. I know nothing about CH but I do our Rose who gets very worked up if a truck goes up our street .. after 11 yrs she still thinks its coming after her ..

The blanket looks wonderful. Can't wait to see it off the loom and finished.

I think you have a treasure in L.
She is becoming a really good weaver!

Hope the kitties will be alright. They have a good Mom watching out for them.

Have a great day!
Louise

I definitely love the honeycomb blanket and cannot imagine weaving something that wide!