No turkey for Christmas.

While I didn't have too much to do today, I still felt like I was on the run....and I don't like it, even a little.

I resent sometimes the craziness that we inflict upon ourselves during the holiday season.  I wonder, often, why so many of us still grit our teeth, and white knuckle it through Christmas, as if our lives depended on it.
Getting the right gifts, spending the right amount of money, preparing the right food.
What???
Seriously.
A lot of people have lost the whole concept.........the 'goodness', the caring, the meaning.

It's not about Walmart, folks.
I know I try hard NOT to go there.....and more and more, I talk to people who feel the same, people who try to downsize the commercial side of it, and put more emphasis on family and friends.  I would like to experience Christmas in a place similar to my childhood.  When it was simpler, less complicated.
People weren't trampling each other after a pair of sneakers.

Toys came from the five and dime, or if you were lucky, in the mail from Sears.  The local paper mill had a Christmas party for all the kids, there was a free movie.
There was an excitement that was palpable, but it wasn't about how much you got.
It was more about how much you gave.

On the way home from the studio today, I caught sight of this guy. 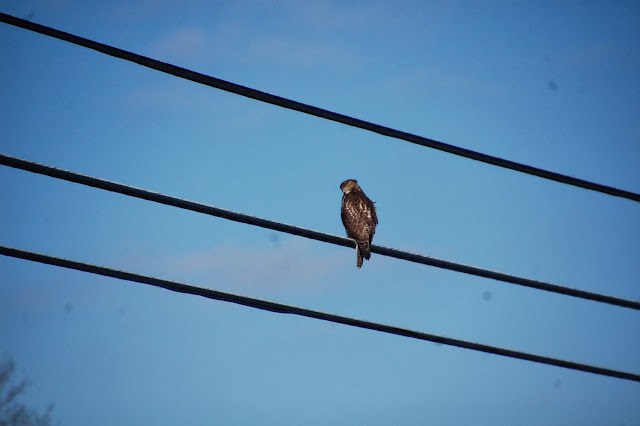 I made a U turn, parked my car on the side of the road, and grabbed my camera. 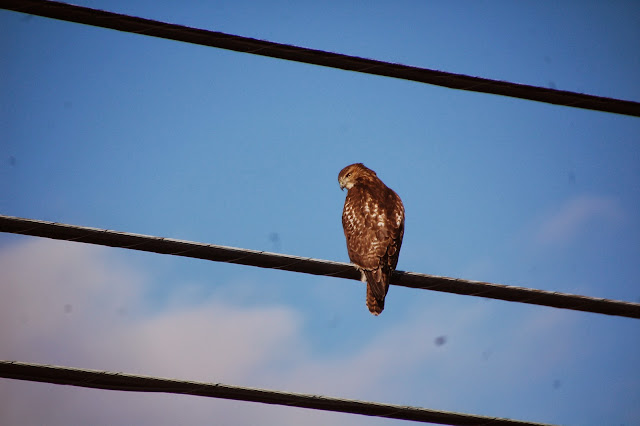 He looked somewhat annoyed, as I tried to get a good shot, without getting killed by passing cars.
And it was cold.

Then he totally disrepected me, and turned his back.
Hrrumph.
I swear that is what he said. 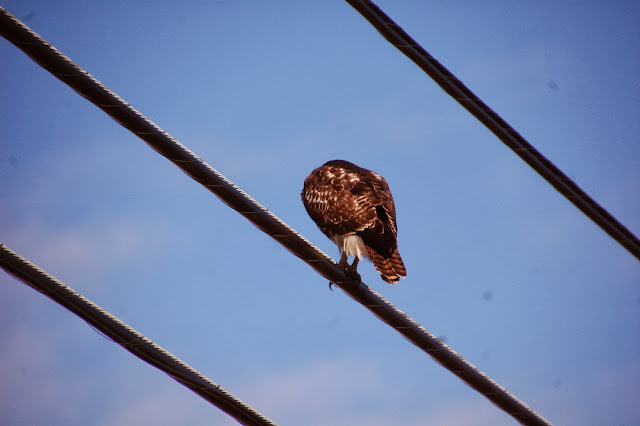 Not to be deterred, I got closer.
And I got 'the look'. 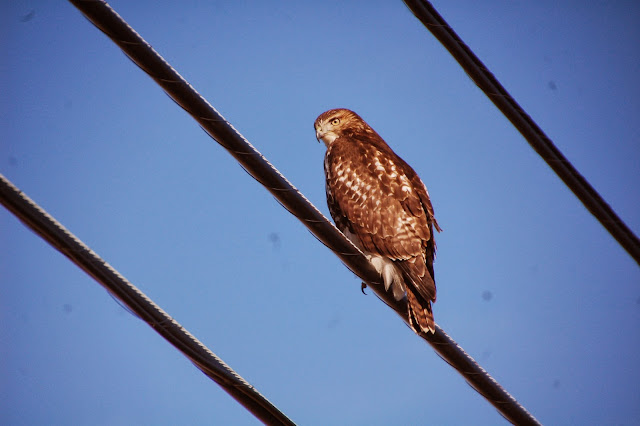 He got his feathers all in a ruffle. 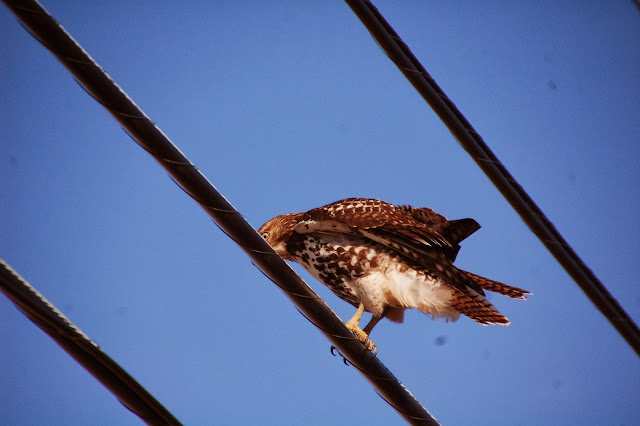 Keeping his eye on me the whole time. 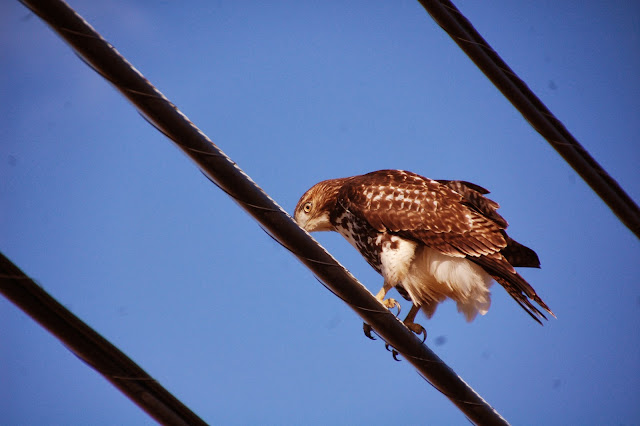 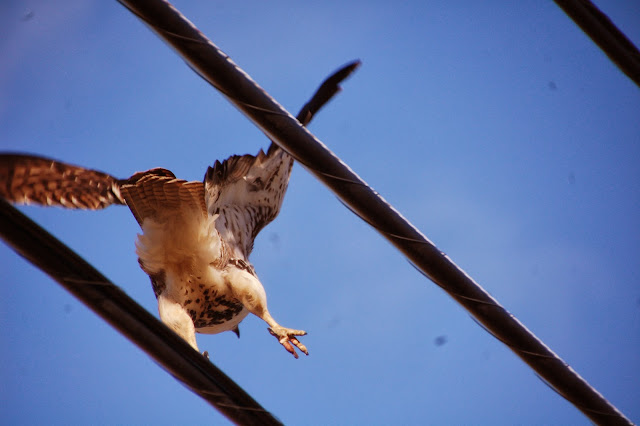 He looked over his shoulder, as if to say, "Are you done?" 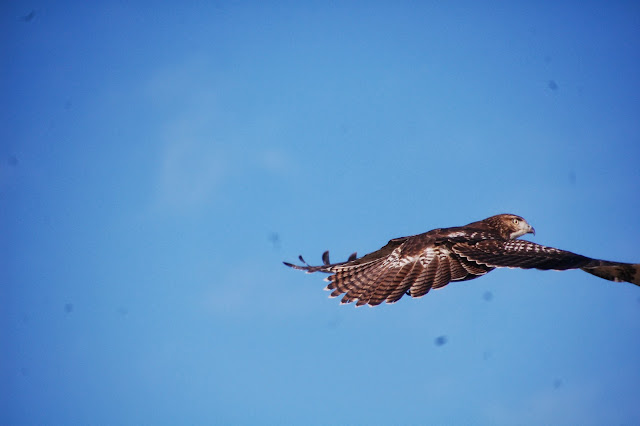 He moved up the power line, just a ways, settled again, and looked down at me.

I think he said Whiskey Tango Foxtrot.  At least that's what it sounded like.
Really. 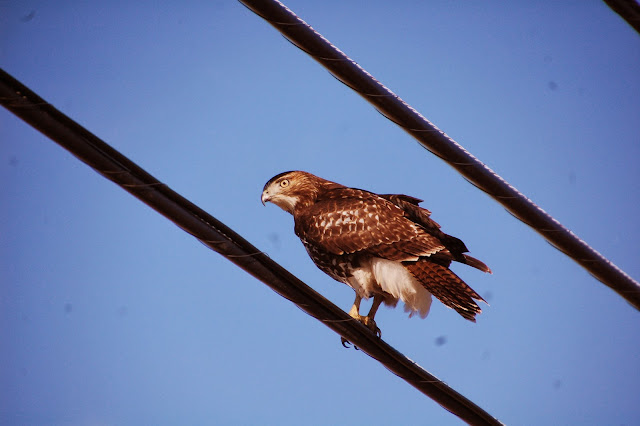 I was getting cold, but hated to leave. 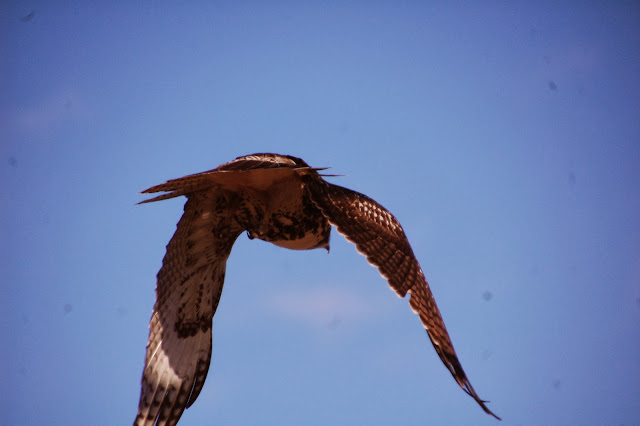 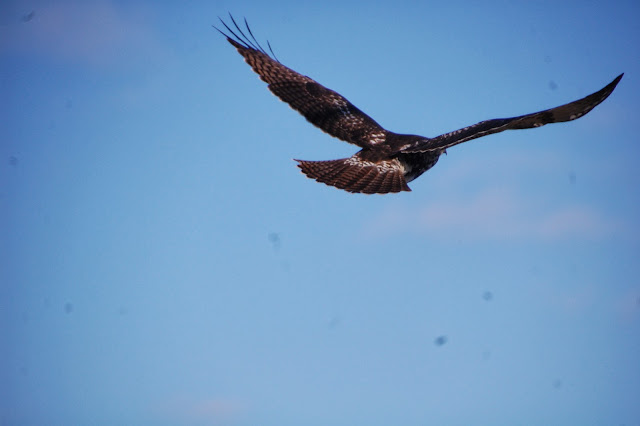 As beautiful as he was, he was not very friendly.
Even the day before Christmas.  What's up with that?

He posed for me real pretty, I think he said,"OK, OK, take the picture already." 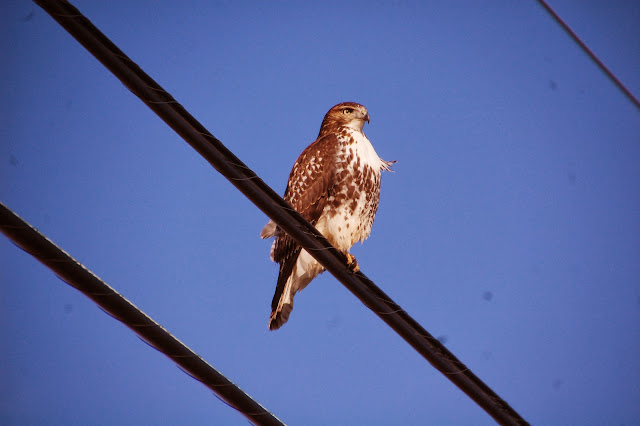 Then with a little shriek, he flew off again. 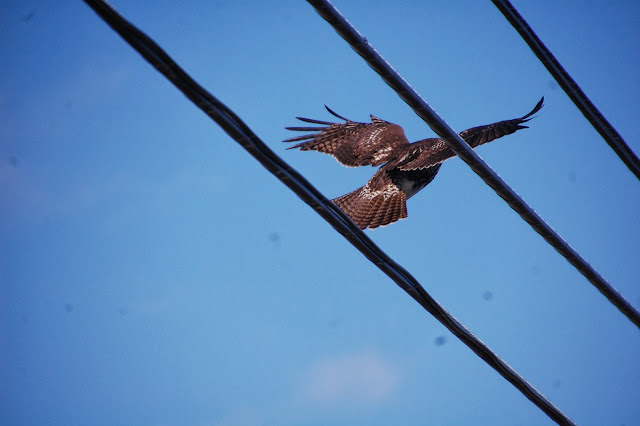 To the highest spot he could find nearby.  So since he was not thrilled with the paparazzi following him, and since my fingers were frozen, I decided to bid him adieu. 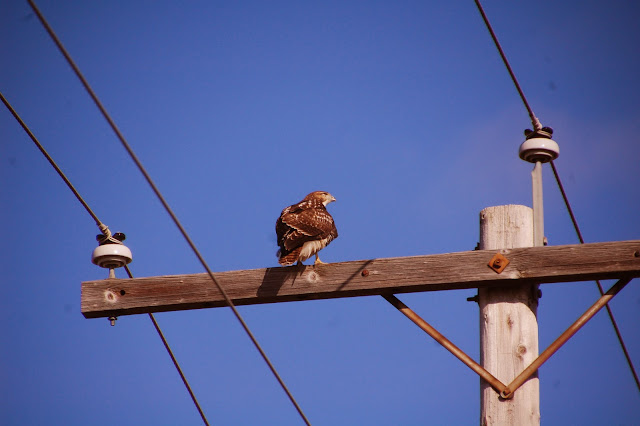 Now that's magic! Merry Christmas to you and yours.

He was up there waiting for dinner to come by, and you were scaring dinner away :-)

People don't understand why I don't like Christmas and no longer choose to grit my teeth or white knuckle my way through it. These days, it's about going in debt, fighting over a deal, buying something for someone just for the sake of getting them something - but not putting the thought into the gift, and I even get annoyed at those who insist on knitting/crocheting/weaving something for someone who won't appreciate the gift because at that point, it became about the giver instead of pleasing the receiver. Which leads me into a whole 'nother complaint about receivers not at least appreciating the thought. So, my kids (they're grown, not little) know I no longer officially buy gifts just because it's a holiday. I don't need a special day of the year telling me that I have to buy them a gift. I instead buy them when I see something I know they would enjoy.

I love hawks. We have several red tailed hawks behind our house, with nests in the tree next door. I love hearing them talk to each other as they chase around the sky. We have one or two that are exceptionally large, with white chests, and I wonder if they are falcons. Great pictures and dialog of the one in your post.

What a wonderful slice of nature. Thanks for sharing. Happy Holidays to you! Glad you are feeling more tolerable.
Ruth Ann in OK.

You were definitely scaring away his dinner. I love that you got some shots of his face.
I just don't go crazy over Christmas at all. I drove over to my girlfriend's house today to visit a while. She and her husband were outside gardening and just taking it easy like we are. It was so enjoyable. I just boned a chicken to make soup tomorrow or the next day. We are having a roast tomorrow afternoon for the two of us. Easy but very nice. I just don't do stress if I can avoid it. I've had enough of that in my life. The worst part of the day is I don't have enough sugar to make the fudge I promised. Uh oh, maybe tomorrow:-)

Hilary, your hawk captures are fantastic on this Christmas Eve day.
For some reason, I've been kinda relaxed this holiday. A lot to be thankful for, I guess.
xoxo

I think you can say butt shot any time you want to, as long as it is regards to cameras and wildlife. I have often found myself wishing to stop and get some shots of our hawks out here. Thay are definetly thriving here. Lots o' feild mices for them. One of these days, I will make myself stop and try to get some "butt shots" too.
Merry Christmas Eve. Merry Christmas tomorrow!

Merry Christmas, Hilary and to all your family. May the Holidays be blessed with good times and may the New Year be filled with all good things.

For all he knew you may have been a hunter. You really got some great photos and I agree with much that you wrote tonight. I think back to Christmas when I was young and it seemed so much more about family and getting together to enjoy small, personal little treasures and a wonderful meal. It is up to each and every family to bring it back to what it should be. I wish you a lovely Christmas with your family, Hilary. Hugs, Deb=^..^=x4

Beautiful series, H. What a treat.. for you.. not so much for Mister Whisky Tango Foxtrot.

Great hawk shots. We have a pair in the neighborhood. The female has been around for quite awhile, but I've just recently seen the male. They seem to like our backyard. Probably because of all the birds who frequent the bird feeder. A friend of mine who lives in a condo on the beach has a beautiful Red Tailed Hawk that will come and sit on the balcony rail when my friend is out there playing his harmonica. It's really a music lover I guess. I would never have believed it without seeing it.

Love the hawks, they are difficult to photograph, too.

Merry Christmas, and a Happy, Healthy 2012 to you and yours, Hilary.

Gorgeous shots of the hawk. I see them often around here and think how regal they are. Love the blue sky too! Merry Christmas.

I get that sneer over the shoulder on a regular basis from my daughter!

I LOVE this entire thing. Especially: "Then with a little shriek, he flew off again." I want to frame that and hang it on my wall. Something about it encapsulates so much. Thank you for your brilliance and Merry Christmas!

brava on your POTW

Congrats on you POTW, I love hawks and these series of photos is very special!!

Congratulation on receiving the POTW honour! Lovely Red Tail too. Your story mirrors to a degree the approach my wife and I have adopted. Interestingly enough my wife is a retired nurse and I grew up and worked in a paper-mill.

Nice shots, hawks don't seem to like being looked at long. I wrote checks for the holidays to those who did need.

It must be hard to be so photogenic.

i never get any hawks close enough to be shot with my camera :(
so i loved these photos.

ps...looks like it's time to have your camera lens or insides cleaned out....that's what those spots are.

Love your pictures of the hawk. You are one determined girl!