A couple of days ago, my friend Karen, of ThisOldHouse posted pictures of a beautiful dog whose days were numbered.
Ivy, a one year old pit bull, was scheduled to be euthanized on Jan 3rd.  The New Haven Animal Shelter had decided that she was deteriorating in a shelter setting, and that was that.  She was depressed, not eating, losing weight, not thriving.
No, she wasn't.  She needs a home. 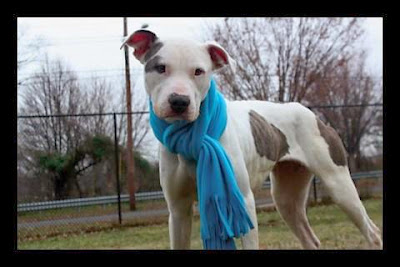 I know, of course, that Ivy is one of thousands of dogs destined to be killed, simply because they don't have homes, but for some reason, maybe worn down by 10 weeks of pain, I felt like someone had stabbed me right through the heart.  I went to bed thinking about it, and woke up in the night anxiously trying to find some answers.  I went to their Facebook page, and asked what someone had to do to rescue her. I offered to pay the adoption fee, if someone wanted her, and the money was an issue.
I called Out of the Pits, in Albany, my favorite rescue group, and where I got Roy.  They agreed to call the New Haven shelter, to see if they could pull her and buy her some time.  I offered to go get her, figuring I could do the 3.5 hour drive on Saturday, if there was someone who would take her when I got back.
I didn't give much thought to bringing her home....DH and my mother and I are pretty squished into this little house.  And besides, it wouldn't be real fair to my Roy.
Then, while waiting to hear from Cyd at Out of the Pits, someone posted on FB that Ivy was being rescued, by a brand new group called Running for Rescues.
Hallelujah, and Amen.
They are picking her up, and taking her to her foster home in Vermont, on Sunday.  Ivy is starting a new year, and hopefully a new life.  Poor baby girl.
I pray that she will get a forever home, soon.

Running for Rescues can be found HERE
They are brand new.  Ivy is their FIRST rescue.  Their concept is fantastic.......if you are a runner, you can fundraise for them, at whatever race you want to run, whenever you want to run it.  It's an amazing concept, and I applaud them.
If you're not a runner, they will help you train for a 5k.
Check them out.  You won't be sorry. 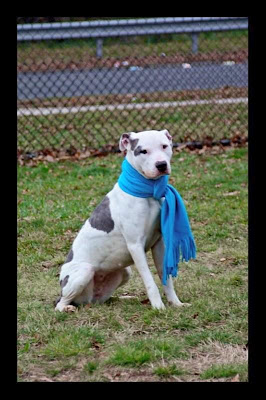 For myself, my reaction to Ivy has made me realize that this year is the year I want to do more for a cause that is dear to my heart.  The statistics are overwhelming, and I simply cannot stand it.  I know I can't save them all, but I also know that I need to be present.  Being present means not turning away.

I just love you, Hilary. You have the heart and soul that I so admire. Sometimes you just can't turn the page or close the site. Something speaks to you and you have to listen. Your positive energy got things rolling for Ivy. I wish her a long and happy life with a loving owner. Hugs, Deb=^..^=x4

God Bless you. It's heartbreaking the number of animals that are discarded. Some of the adoption fees are so high that a family that could provide a loving home and daily needs just can't afford the fees. I have adopted several senior dogs because I knew they would spend the rest of their days is a shelter. They were NEVER a disappointment. The last one was about 13 and God love him I had him 3 weeks before he passed, but he was loved every minute.

I saw the post on Karen's blog and was so happy that Ivy was saved. You are such a lovely and caring person to do whatever you can to help. Ivy has been and will be one of the lucky ones, like little Chip. I hope Roy is doing better. What an amazing buddy he has been for you.

There is a terrific animal sanctuary not far from Hilo. The name of it is Rainbow Friends Animal Sanctuary. It was founded by a woman from the Netherlands. Amazing place. Based on love and respect for the animals. You can check them out online. They have made a huge difference in so many of our animal friend's lives.

I'm thrilled that Ivy was sprung from the shelter and has a chance for a new life with a forever family. Her face, and her story, really struck a nerve with me, too.

You are a good person, Ms. Hilary.

You know the oddest thing is that my husband just this week said I could adopt another dog if I ran a 5K. This group sounds awesome, thanks for letting the public know about it. Love to Roy! Regards, Nancy

Hilary, you just made my day! I cannot stand to see animals suffer, because someone can't take them in. I would do it, but I don't have room for the 49,000 animals I see that need homes. (Of course, I want them ALL!!!) I will make this my year to help do something to alleviate the homeless pet problem as much as I can.

Ivy is beautiful, by the way!

Ivy is beautiful. It sounds like you might be from my neck of the New England woods. I too work for a shelter www.saveadog.com and while we don't often have pits that we rescue this week we will have two and I have to say the one I have met so far, has nuzzled his way into my heart. Like you I have a dog that would not be thrilled with me if I brought another dog home, but every time I volunteer at the kennel I fall in love with another one. I started volunteering there about 2 months ago and I can say that no matter what else happens good or bad in my week I love my times with the dogs. Good luck finding your niche to be more involved!

Ivy is a beautiful dog and I'm so glad that things seem to be working out for her. But....do what you can Hilary, then remember that prayer from the Big Book....
Wishing you a Happy New Year filled with the wisdom to know the difference.

Hilary... you make me choke up and tears in my eyes as I read this!

My little granddaughter helped bring big bags of litter, food, and jugs of bleach, paper towels, and laundry soap to the local shelter here for Christmas. We stacked em up and and took pics and sent them to great grandma with a note that a donation was made in her honor. Great Grandma wishes she could save every dog and cat too, and sends a lot in $$$ donations to groups, but warms her heart to see when others help out. I will tell her about this new group too.

I am very thankful that both of the nearby pounds are mostly non-kill (only in very extreme cases will they put an animal down). They even take in animals from other states that might have a better chance to get rescued here. Both of my cats and Kid the Younger's cat came from there. I go to visit as often as possible, and it always breaks my heart when an animal is turned in because the owner is moving. We moved all over the world and never left an animal behind. My last move was from Maryland to Oregon, accomplished single-handed with 3 young children (ages 10 to 2), 1 cat and 2 adult Akitas.

Hilary, you are such a kind soul... I'm so grateful to have come to know you through this blogworld of ours. One step at a time we CAN make a difference.. look what we've done already. I'm right there with you... more Dog Days to come.. and Hooray for the Underdog!