Me talking about my freaking headache???
Cause I am sick of it, sick of having it, sick of talking about it.
So I decided that I would get you up to date, today.  And then I am not talking about it anymore, unless:
1.  I get a definitive answer and have a plan.
2. It goes away.
3. My head falls off.  Something that you might need to know if you keep coming back here.

So, I went to my second opinion neurologist.  He agreed that I have had the Chiari all my life, but he does not think my headaches are being caused by it, and he would NOT do surgery, no way, no how.
He thinks I have post concussion syndrome, and he advised me to go ahead with the CT scan of my sinuses, ordered a couple of weeks ago by my primary, and see a neurologist.  He said that a neurologist would help me with the pain.
I was pretty blown away by all this, not that I wanted surgery, but I certainly didn't expect two totally different opinions.
So, I had the CT today, and I have an appt with a neurologist before Christmas.
Other than that, I have decided that this headache is NOT going to rule me.  No more.
NOT HAPPENING.
For the last EIGHT weeks it has tried to own me, but I have news.
It doesn't, and it isn't going to.
So there.
End of subject until 1, 2, or 3 take place.
Aren't you relieved?  You have to be as bored with it as I am.  If you're still there.....hmm.
You are, aren't you?

And a wonderful way to change the subject is with a baby.  Don't you agree?
O comes through the door, and whether she is walking, or being carried, the first thing she says, quite clearly, is SYDNEY.
Wearing her Daddy's hat. 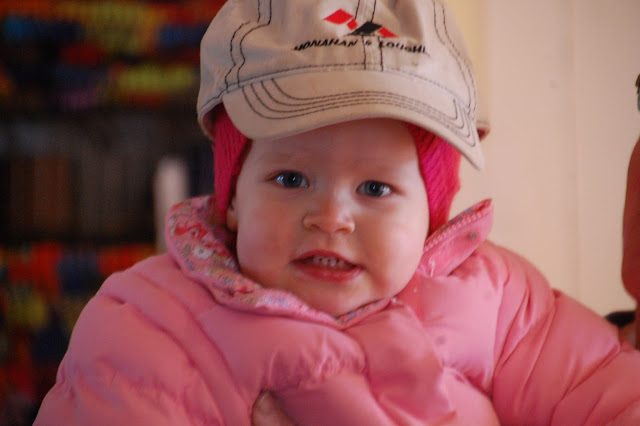 She LOVES Sydney.   And Sydney looks quite unperturbed, even though O has a good handful of
Sydney's furry self. 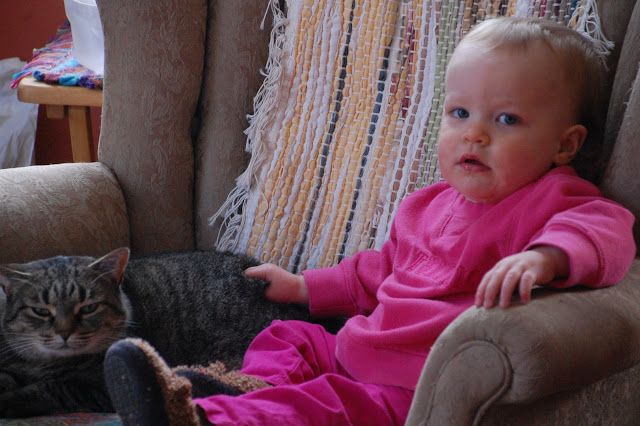 Sweetness comes in all sizes.
I don't think anyone could argue that. 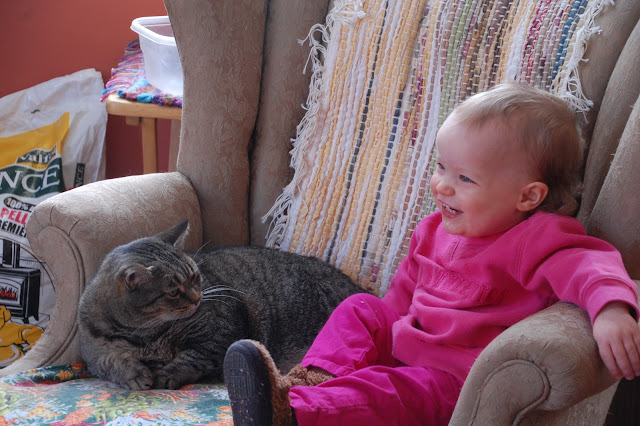 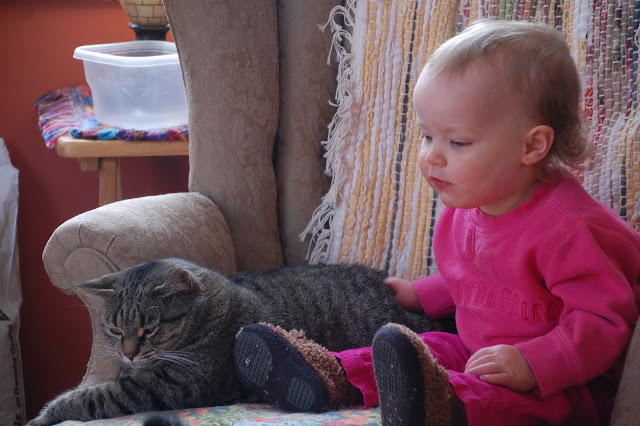 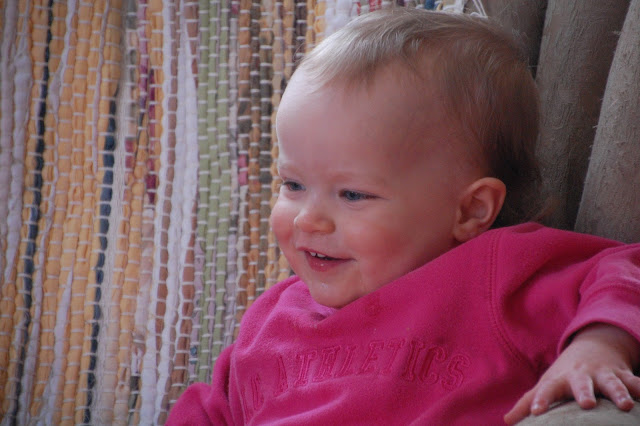 Then L and I tried to get some serious work done.
We needed 15 sections on the Union Special, but I apparently miscounted and only did 14.
It was important that it be done right, for a client.

So we tried to get it done another way.
L had left some empty heddles in the middle, so I resleyed, it, and we put some more threads on, and weighted them off the back.
My husband would call this Nicky Hokey.
My father would have said it's a cob job. 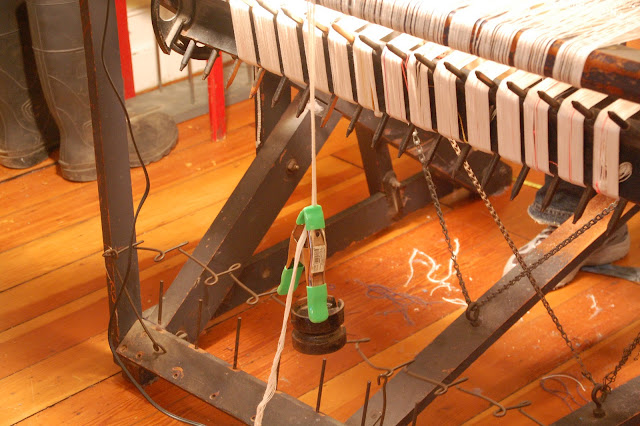 What EVER.  It worked. 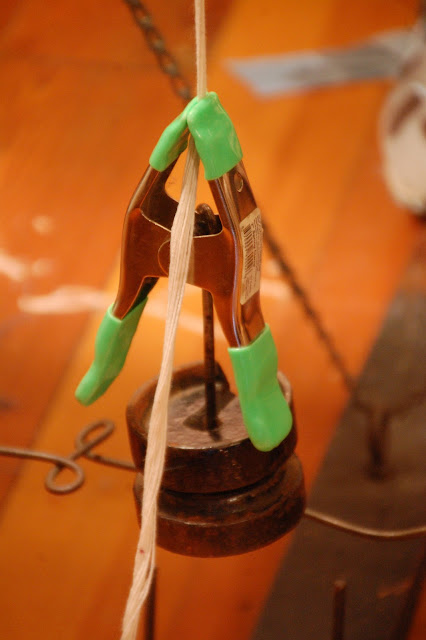 When I left for my appointment, L was weaving away on it, with no difficulties at all. 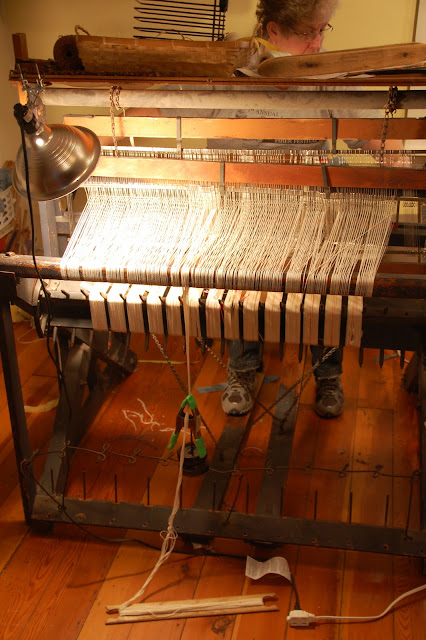 No, I'm not bored with hearing about the headache..... I just want it to go away for you and soon since you have dealt with it far too long. Let's hope the second opinion is correct! It's always a dilemma when there are two.

O is cuter than a button and made me smile!!

Me thinks me sees a CSM machine weight in that there picture! So do you use the machine? Or do you only have weights?

Oh. My. God. I don't even have the words. Heartsick, though.

ok, going out on a limb here....the doc wants to further investigate the sinuses...
when working with loopers there is a ton of fuzz. The loopers are stored in your barn/shed could they have gotten damp and have some unseen mold on them?
When i am working with the loopers i end up sneezing and irritated big time.
Just a thought.

I was thinking the same thing as Krista, wondered if you are coming in contact with mold ?
I hope they can give you some answers and relief, I've been through an entire year of second opinions, and YES, all completely different, I'd had more luck asking an '8' ball thingy ;)
Hugs,
~Jo

totally not bored with your headache....i'm simply sorry you still have it. i totally enjoy your blog and love your weavings. it's the first time i've commented...and i guess i simply wanted to say "sorry"...

Mold is a thought.. clever people above in the comments. I'm sorry that you don't feel you have an answer yet but I'm relieved that surgery is not advised. And no, not sick of hearing about it. I look forward to the day you say it's GONE.

That little angel face is a smile-evoker, for sure. What a pair she and Sydney make. :)

Yeah, second opinions often raise more questions than they answer, at least for me. I just asked my doc for a referral to a pain management specialist, since despite all assurances the orthopedists have done nothing but make my back worse.

O reminds me very much of my middle kiddo. My favorite pic of her is at about that same age, on the sofa at my mom's sitting with her Bull Terrior. Two fingers in her mouth, and the dog's tail tip stuck in her ear with the other hand. Too funny!

How about a weekly update just to keep us current cuz now we are all concerned and wondering...and Lil' Miss is adorable! Quite the distraction...

I would give a definite thumbs up to the idea of seeing a pain specialist. Unless a neurologist is going to deal with the medical issue, whatever the heck that is, the pain guys are the experts.

Yikes...glad you got a second opinion, though the uncertainty is tough to deal with. I get weather headaches and allergy headaches too...so I can empathize. It's a challenge to learn to embrace the "down time" it requires.

Sydney and O. look like soul mates...esp. in those middle three photo's. The just look like they are in sync.

I am always amazed when a cat is so patient with the little ones, they seem to know that the handful of fur is not to be worried about :-)

As an occasional sufferer of back pain, I feel for you, but I have never had an episode last this long. I can't imagine how you are coping. Good luck with your appointments and I hope they reveal the mysterious cause in time to enjoy the holidays pain free. My thoughts are with you.

Well after you see the next doctor, it might be interesting to get a 3rd opinion and see where it lies .. then go with the majority .. I admire your spunk and kicking the headache to the curb .. I wish I could help

Ah, I have done the same sort of nicky hokey things before. The worst was the first time I warped my Union and wound the warp on the WRONG WAY. My clever hubby fashioned a temporary brake out of plywood that allowed me to weave that warp off (though not without some barnyard words). I, too, noticed the CSM weight.

I'd like to hear updates on the headache as you learn them.

That O is such a cutie!!! And Sydney so tolerant of little hands!! :-D Love how you fixed your error on the loom--I always tell my students...don't worry about how the BACK of the loom looks! hahaha! Whatever works. And no one seems to be bored with your headache but I do wish it would disappear. Surgery seems a scary proposition. Please keep us informed!!! xo

I send lots of wishes for pain relief. Miss Sydney is the cat of the hour, she is a great baby sitter! We have all done nicky hokey stuff to get a warp on or off looms, we are a creative bunch! Feel better dear lady.

I, for one, am glad there is no surgery involved. Surgery on the neck and back is SO risky.
I do have a suggestion. Find a really great massage therapist. Even if you hate to be touched, try to find one someone highly recommends (if you were closer I'd have the perfect person for you). If they also practice things like Reiki that is also helpful. Please try to seek some non-medical help to see if it makes a difference - you don't want to be drugged up on pain meds, and you don't want to continue with this pain. And you really don't want surgery in that area...if you can avoid it.
I am not at all bored with your headache news or anything else! I think about you, and I say a prayer when I think about you. I've been really busy and I haven't had much time on the computer, but I always check in to see how you're doing! :-)
My grand daughter is going to be one on the 21st of this month. Her first word: Uh oh. It's so danged cute.
Love the baby and Sydney is a keeper!
Feel better.
Martha

i have no idea what the headaches are from, but i do know that sleeping on a contoured pillow can make a huge difference, if you're out of alignment in any way......it's worth a try, right :)